2020 Through The Lens Of WL Photographer Luke Gartside

There’s no doubt it feels frivolous to review a year as grave as 2020 through a prism as trivial as surf photography.

However, amid the continuing roll call of doom, gloom and zoom that was the last 12 months, people understandably gravitated towards the sea more than ever. Whether it was just for a momentary dunk in the harbour to break up a day indoors or a long walk through the dunes to your favourite quiet corner, 2020 was about finding little things that made each day a bit more bearable.

For us here at Wavelength, we saw it as our job to keep you inspired and entertained with a stream of stories, imagery and events, centred around our great pastime.

In that vein, here are a few choice moments, captured throughout 2020 around the British Isles. 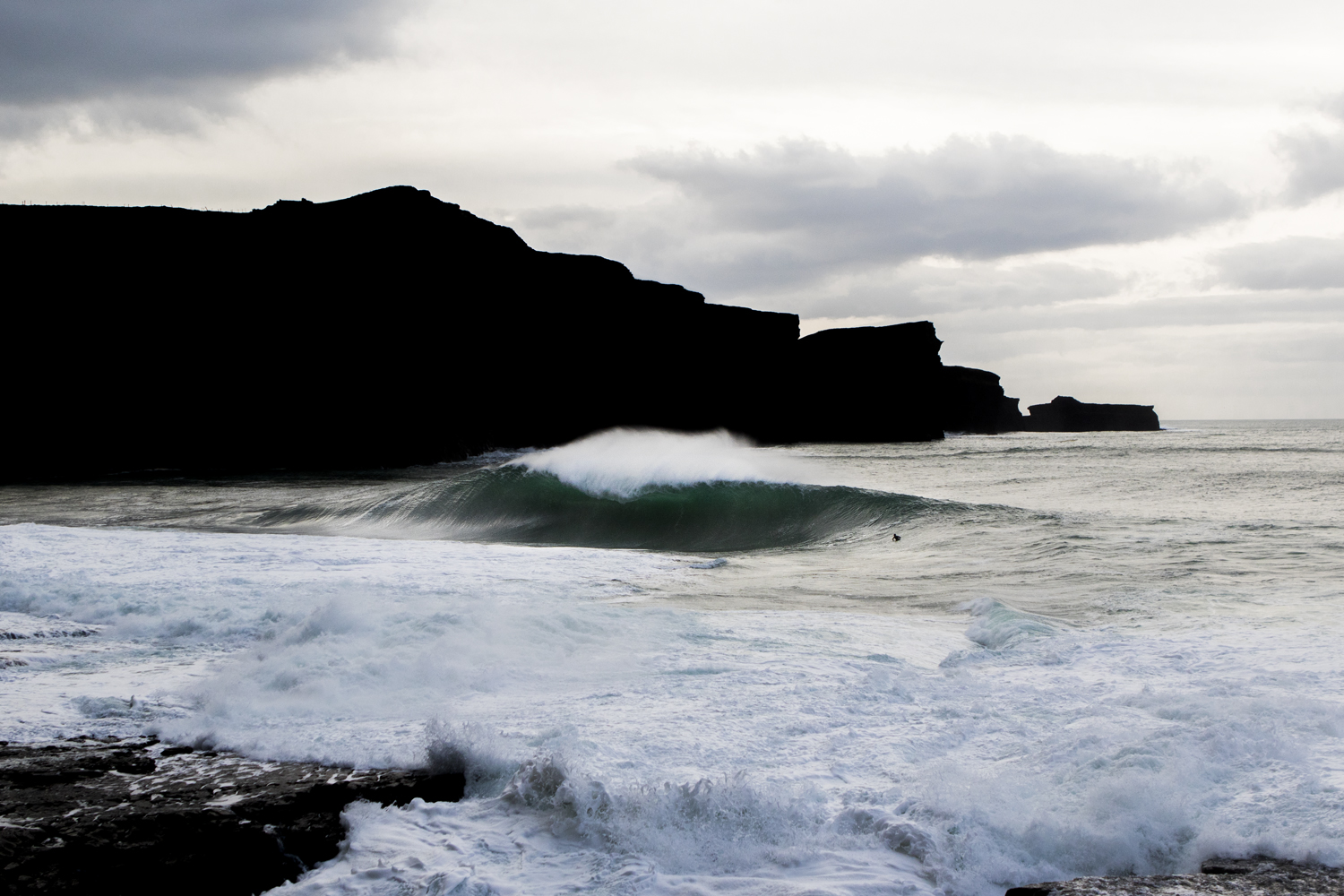 Before Covid arrived in Europe, I made a quick dash to Ireland’s west coast to meet storm Ciara. It was my first time to County Clare, home to some of Europe’s heaviest waves and most dramatic coastal scenery. As a teenager, I spent hours pouring over Mickey Smith’s iconic images from the region, featuring the pioneering exploits of a small crew of wave riders in the mid-2000s. Visiting the place in the flesh sparked the idea to revisit some tales from those halcyon days for our upcoming print edition, themed around surfing folklore. Back in Cornwall, I set about contacting the core protagonists and over almost 7 hours of lockdown phone calls, collected an oral history of classic surf stories from the time, some hilarious, some harrowing, flush with bravery, recklessness, camaraderie and connection. Many of the transcripts appeared sewn together and beautifully illustrated by Mickey’s imagery in Vol 258, while other tales were rescued from the cutting room floor to form a web series entitled Ireland Stories, which remains ongoing. 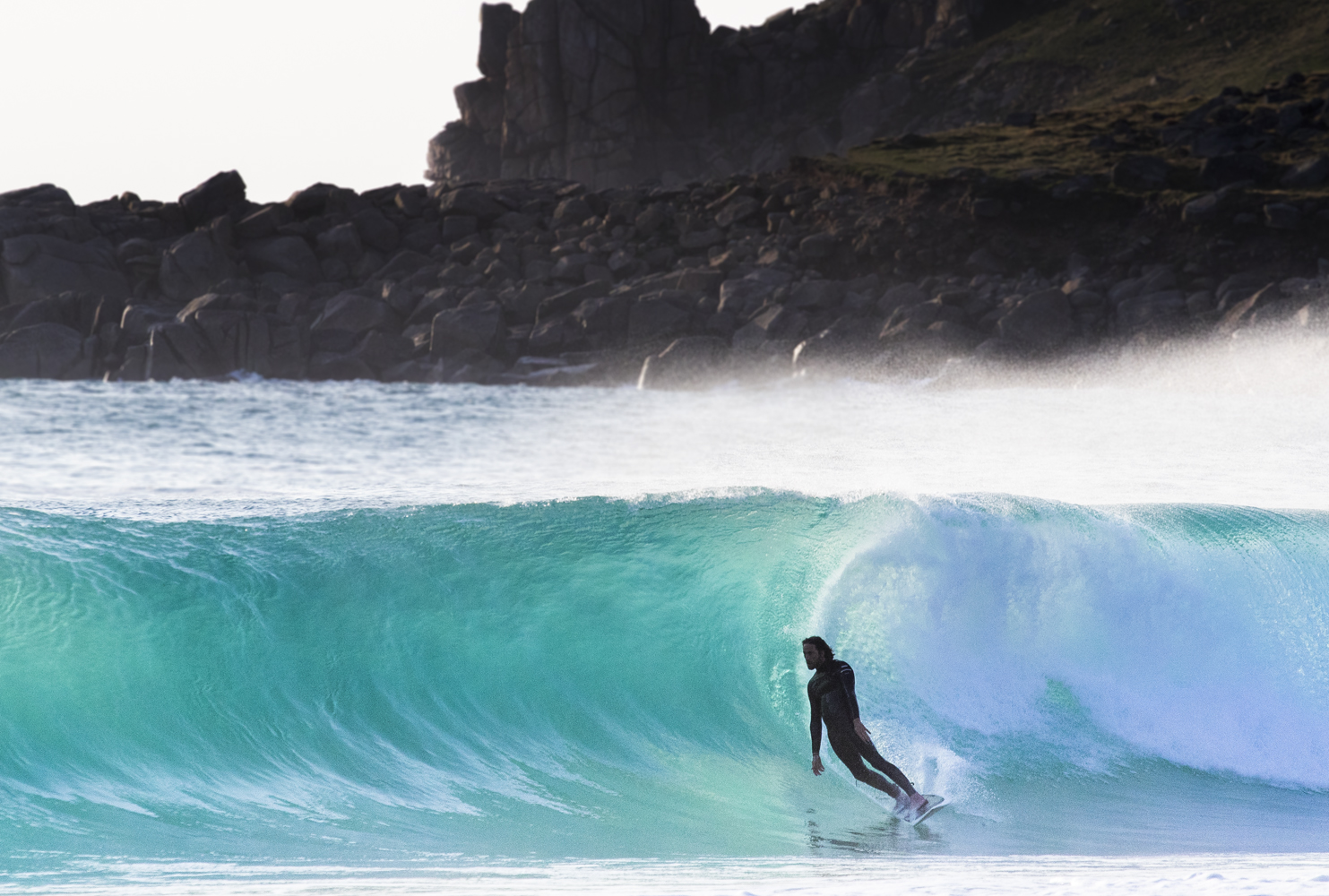 Cornishman Jack Johns, pictured here, was one of several contributors to the aforementioned Ireland story, having played a central role in pioneering waves like Aileens and Bumbaloids back in the day. Since then, he’s become an accomplished photographer, working on projects for the likes of Conde Nast Traveller, Red Bull and Finisterre (we featured a portfolio of his excellent work way back in issue 252.)

This year, however, with his jet setting work schedule curtailed, he became a more regular fixture of the local lineups around his home in West Cornwall and could often be found swinging in deep on a variety of craft, from his boog to the BOS 7’0 twinnie he appears on here.

On the summer’s day this shot was taken, he’d sliced his head open on the morning session, nipping off to A&E for some stitches before heading back to the beach in time for golden hour. After rattling off a few shots from the sand, he slid into his suit and paddled out for a quick hour of backlit drainers before dark. 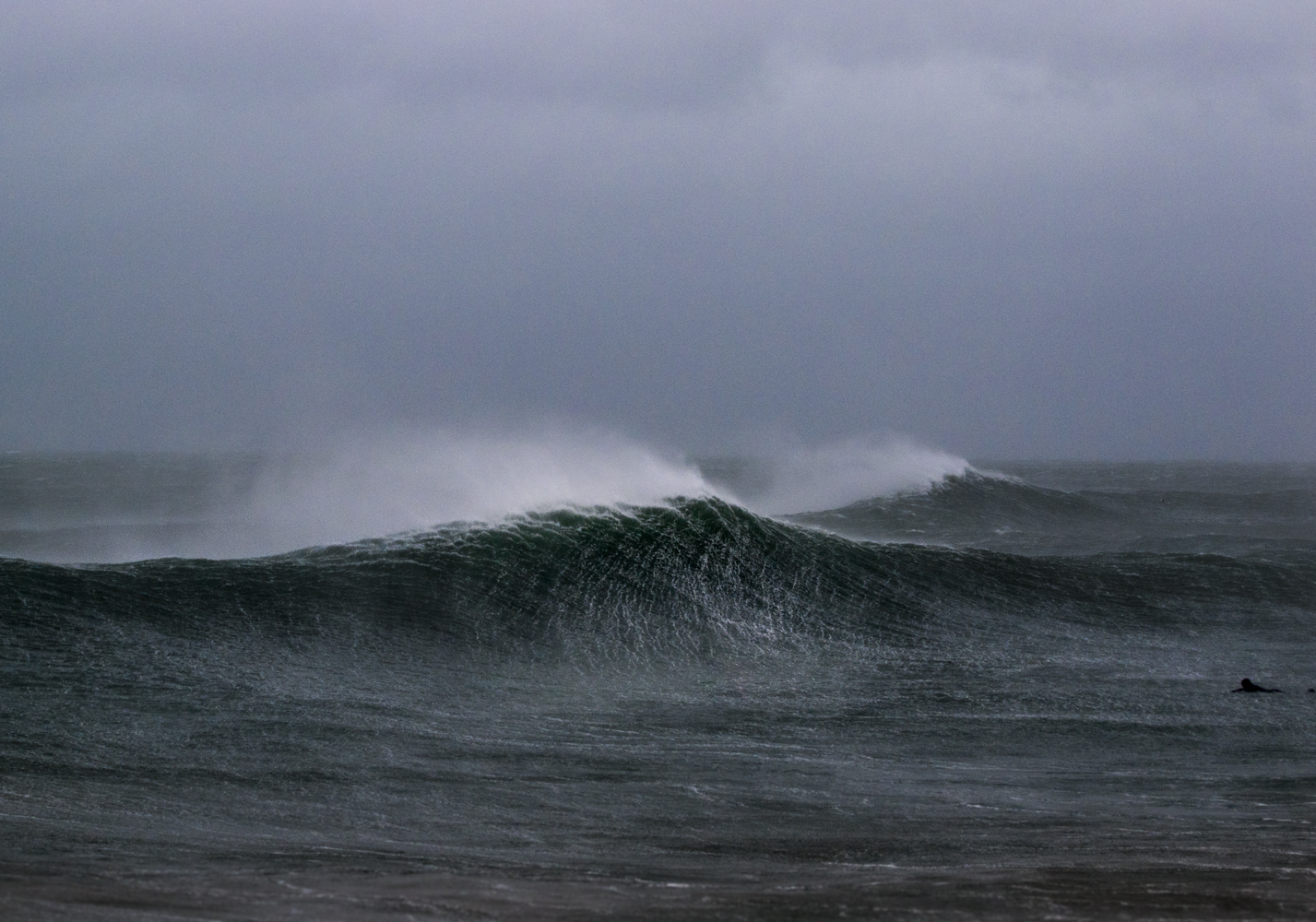 In early January, a storm front dubbed Brendan bathed coastlines from Thurso to La Santa in solid groomed swell. In south-west blighty, it was wet and wild, but there were still a few moody moments worth capturing.

Naming storms was first introduced by the Met Office back in 2014, apparently, as a way of trying to convey the severity of the impending maelstrom and hopefully,  strike enough fear into the hearts of those in its path, they’d be inspired to take action.

I’m not sure ‘Brendan’ quite cut the mustard on that front, but he certainly delivered a whole lot of memorable surf sessions around the continent. 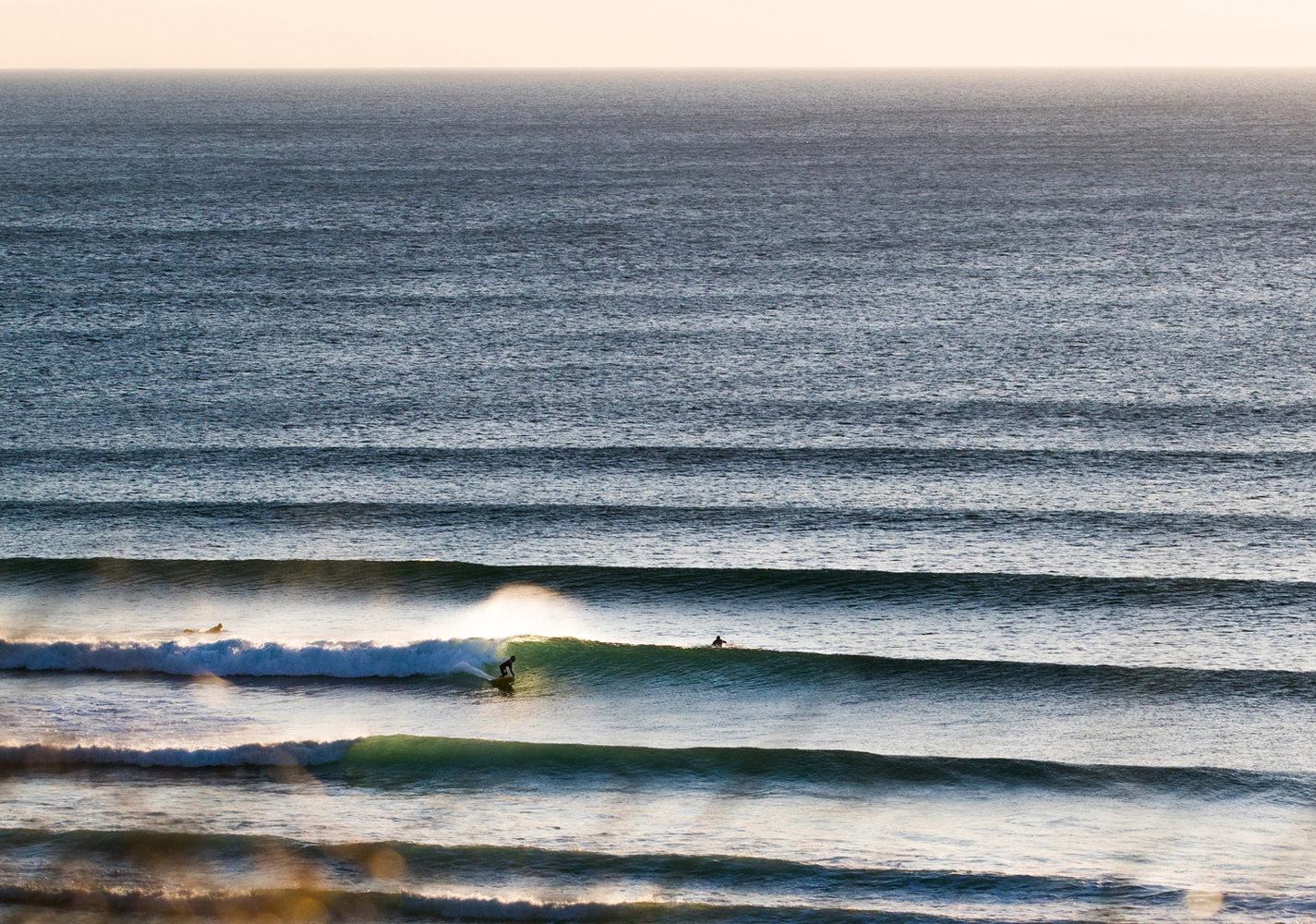 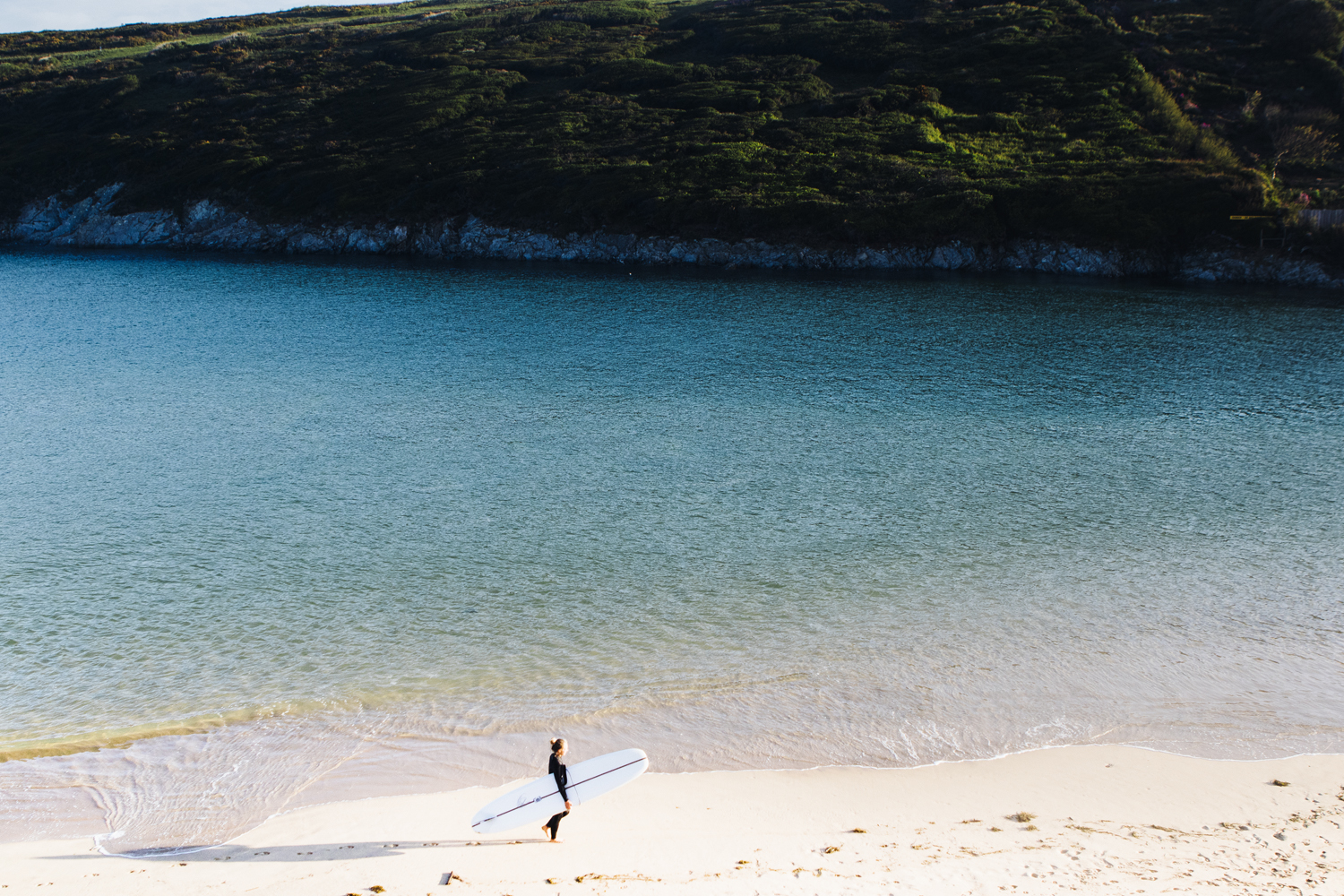 As the country grappled with lockdown throughout the spring, Huey quietly served up a small silver lining for those lucky enough to be able to walk to the waves, with pumping surf, non-stop sunshine and some of the best banks in years. Of course, there was always a tornado of grave concerns swirling just overhead. But there’s no doubt for those able to get in, this lucky alignment offered both much-needed escape and vindication of life choices. 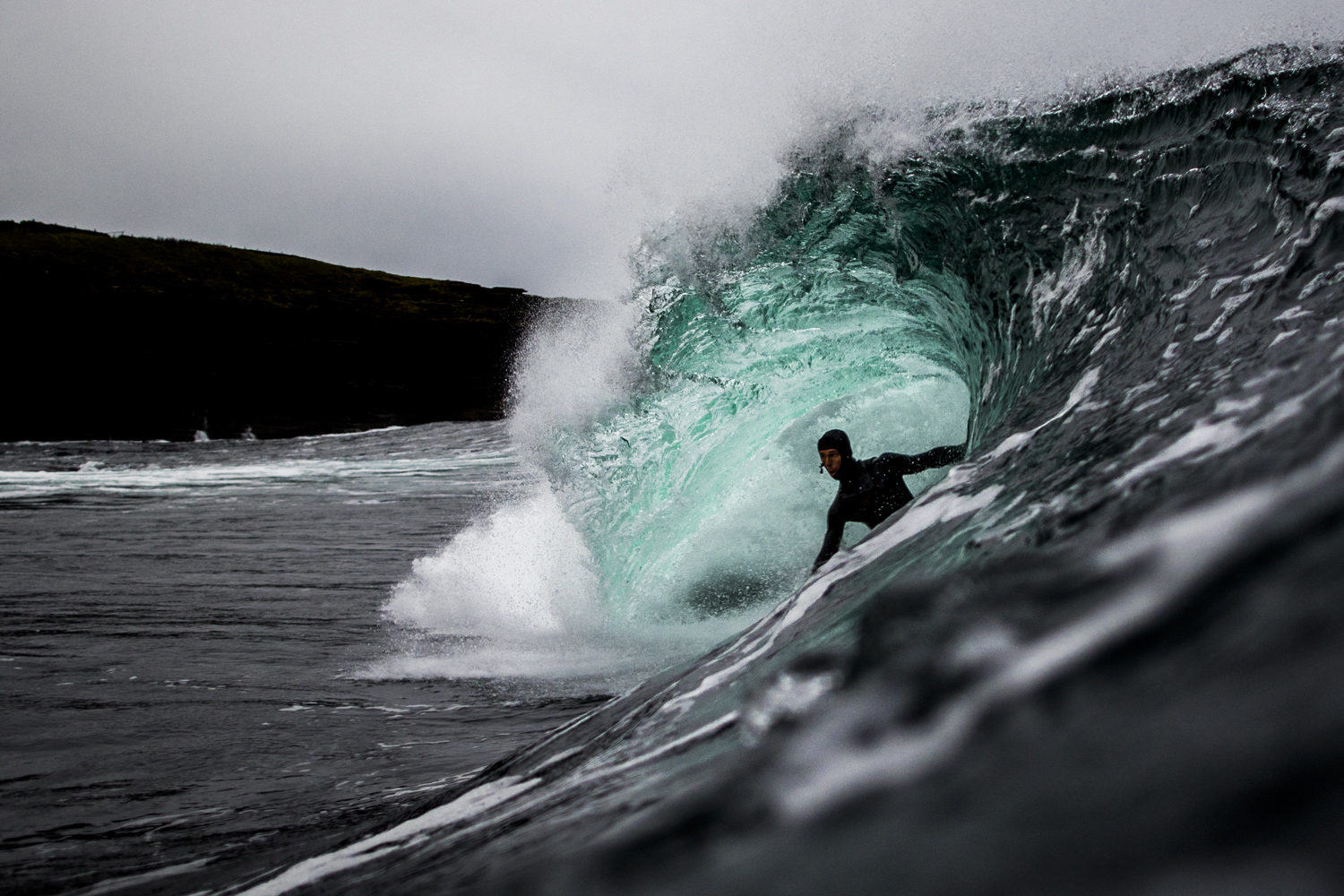 A few weeks before November’s second lockdown, an epic looking chart summoned surfers from around Blighty up to Thurso for a week of excellent waves. Among them was Croyde’s, Will Bailey, pictured here under a flaring lip line at Baggies.

Paddling back out after a wave during this session, local surfer Mark Boyd told me how he’d almost just got sucked into a hole in the reef while trying to recover his board, adding that Ben Skinner had taken a nasty trip down there during a session the winter before. When I got back, I phoned Ben for the full account, which ended up as the first part of an ongoing web series entitled ‘On Reefs’. 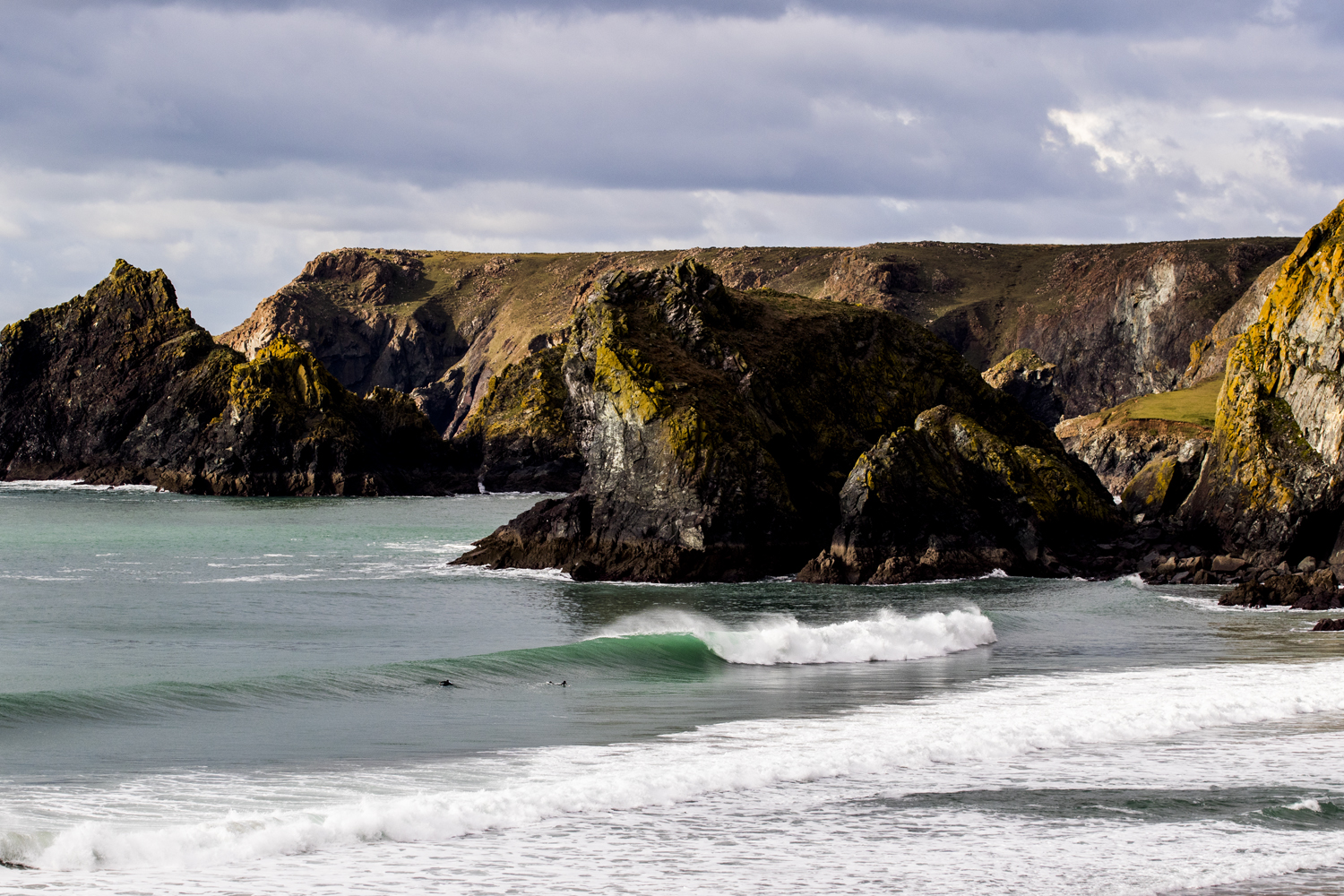 This year, with most of the surfing population off work, solitude was ironically much harder to come by than usual. As ever though, if you were willing to hike for a while and run the risk of a session wearing nothing but closeouts on the head, there were still a few quiet corners to be found. 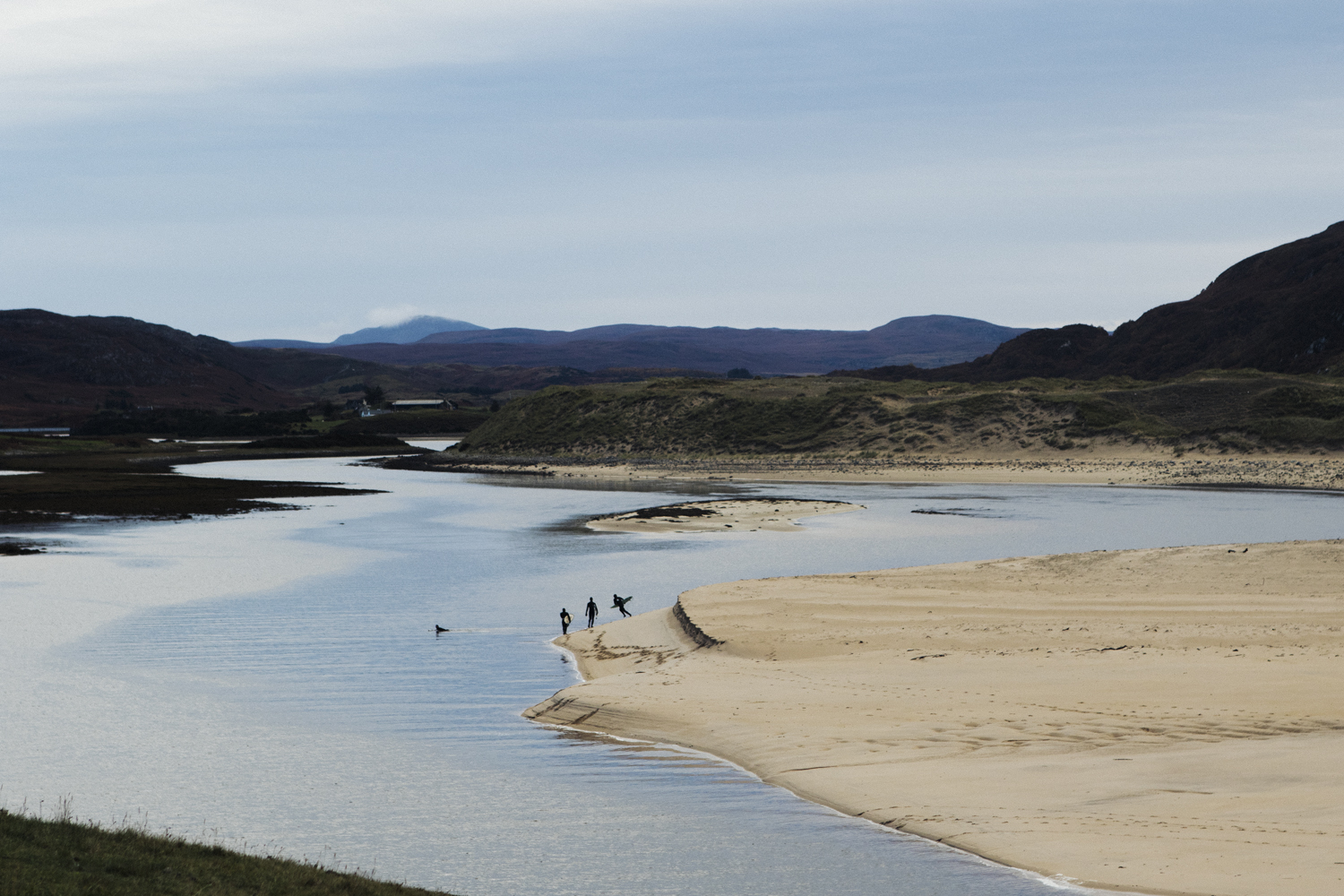 Some long walks back to the car are better than others. Here, a small crew of visiting surfers line up to cross a freezing, salmon-filled river after a session in the highlands. 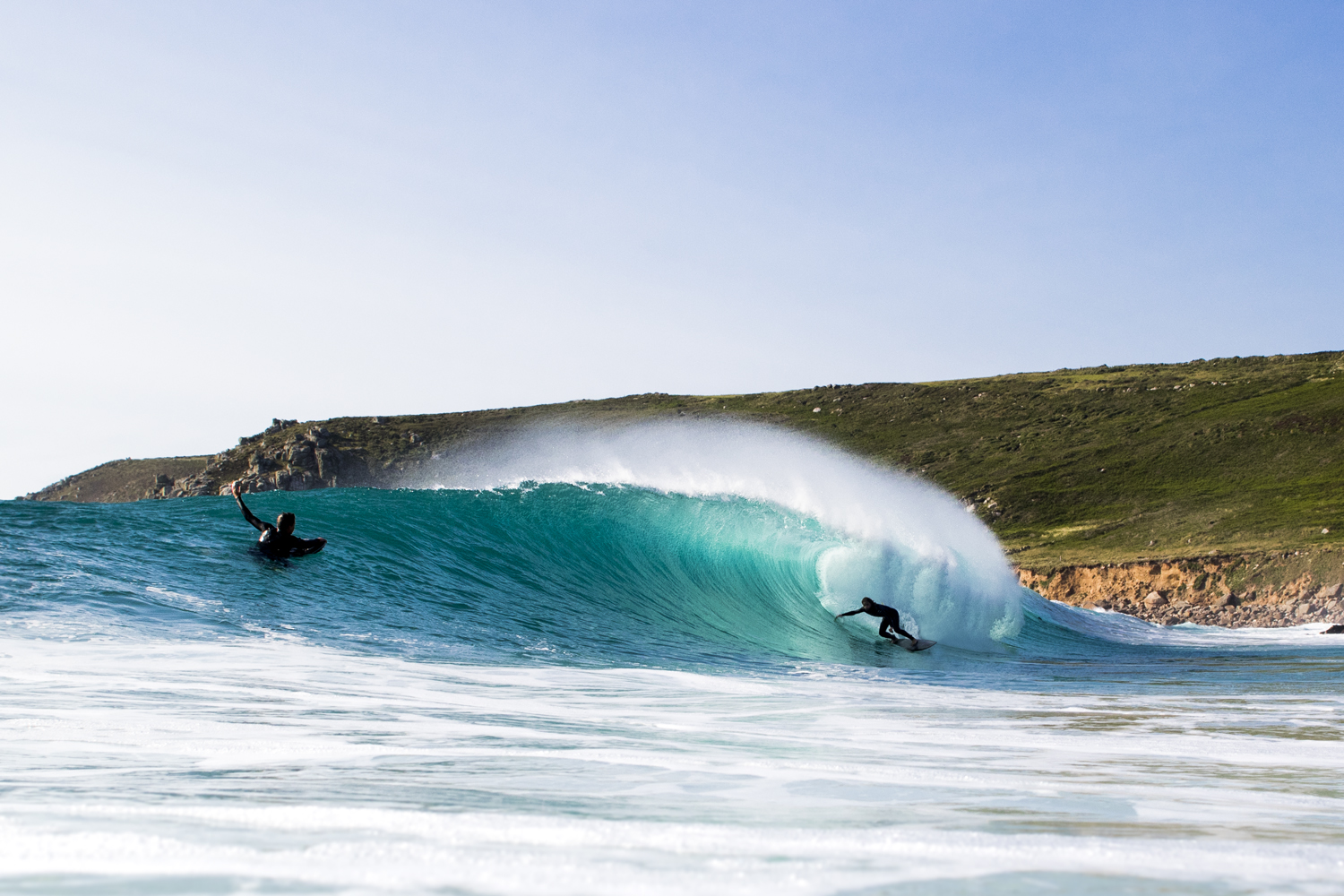 This is lifeguard and writer Pete Geall swinging into a beauty out in West Cornwall. The show of prone solidarity from the shoulder was returned later in the evening when Pete abandoned his beach barbeque to tend to a sponger who’d cracked his ribs in the shorey. After a bit of first aid, he sprinted off up the cliff to get the phone signal needed to summon a rescue helicopter and then stayed with the injured bloke for several hours until it arrived to hoist him away to hospital. 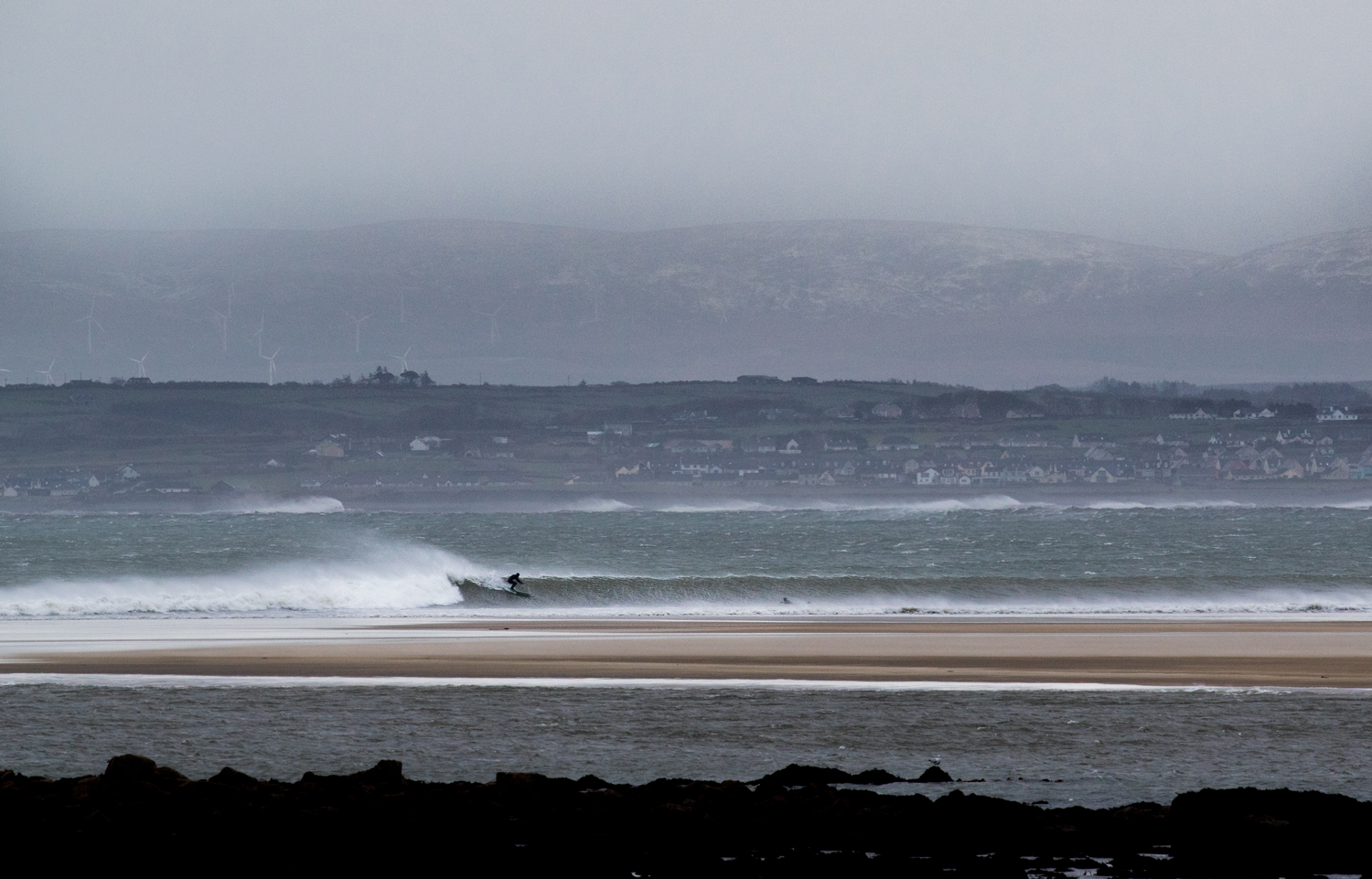 One of my favourite things about surf trips around the British Isles is stumbling across places, away from the region’s best, most famous waves, populated by everyday surfers who’ve decided, instead of battling it out for big tubes or perfect runners among cameras and crowds, to head round a few more headlands and find their own little slice of usually smaller, windier conditions where they can share every set with just a few mates until their feet go numb. Here’s one such surfer on one such session, as spied between the hail squalls. 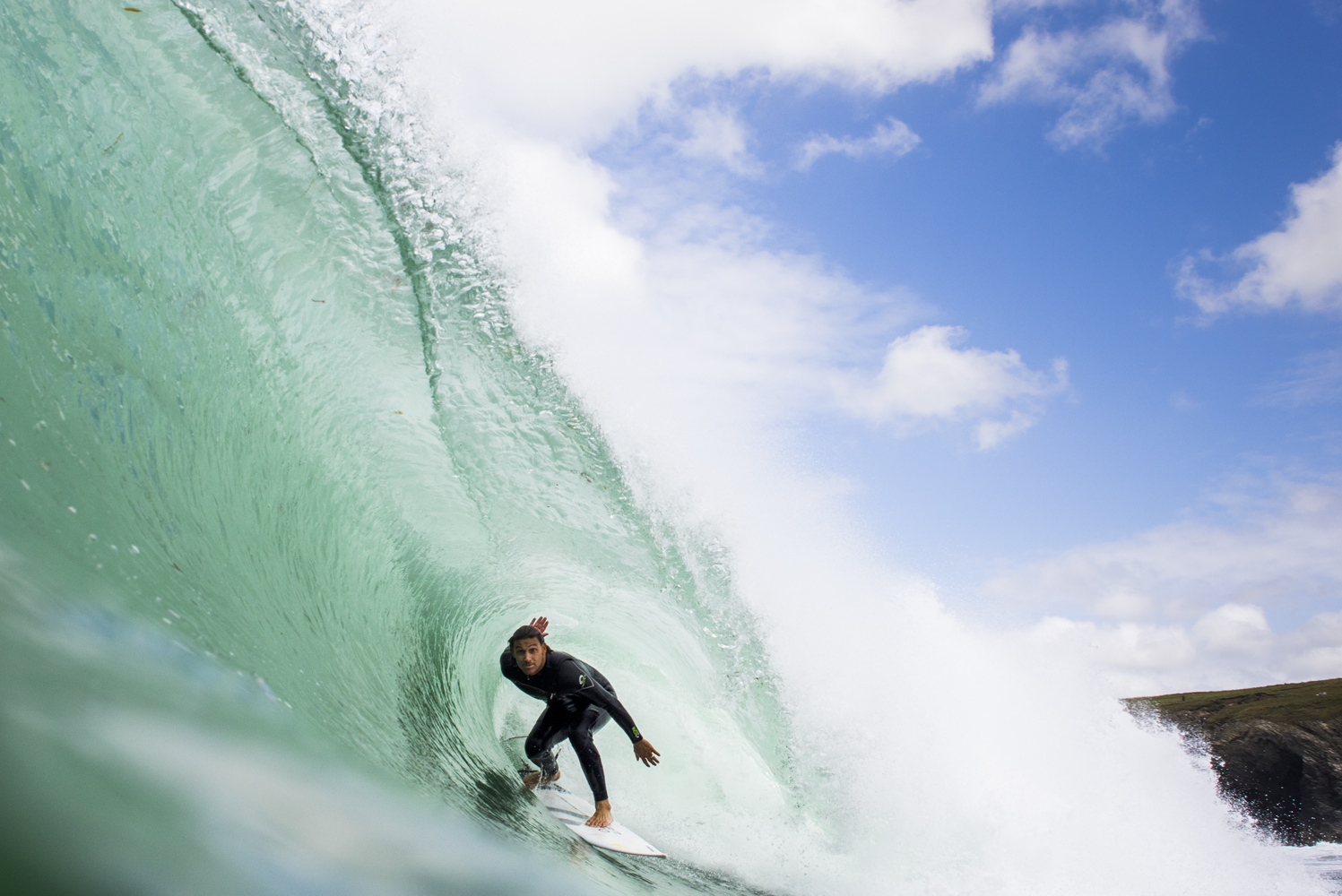 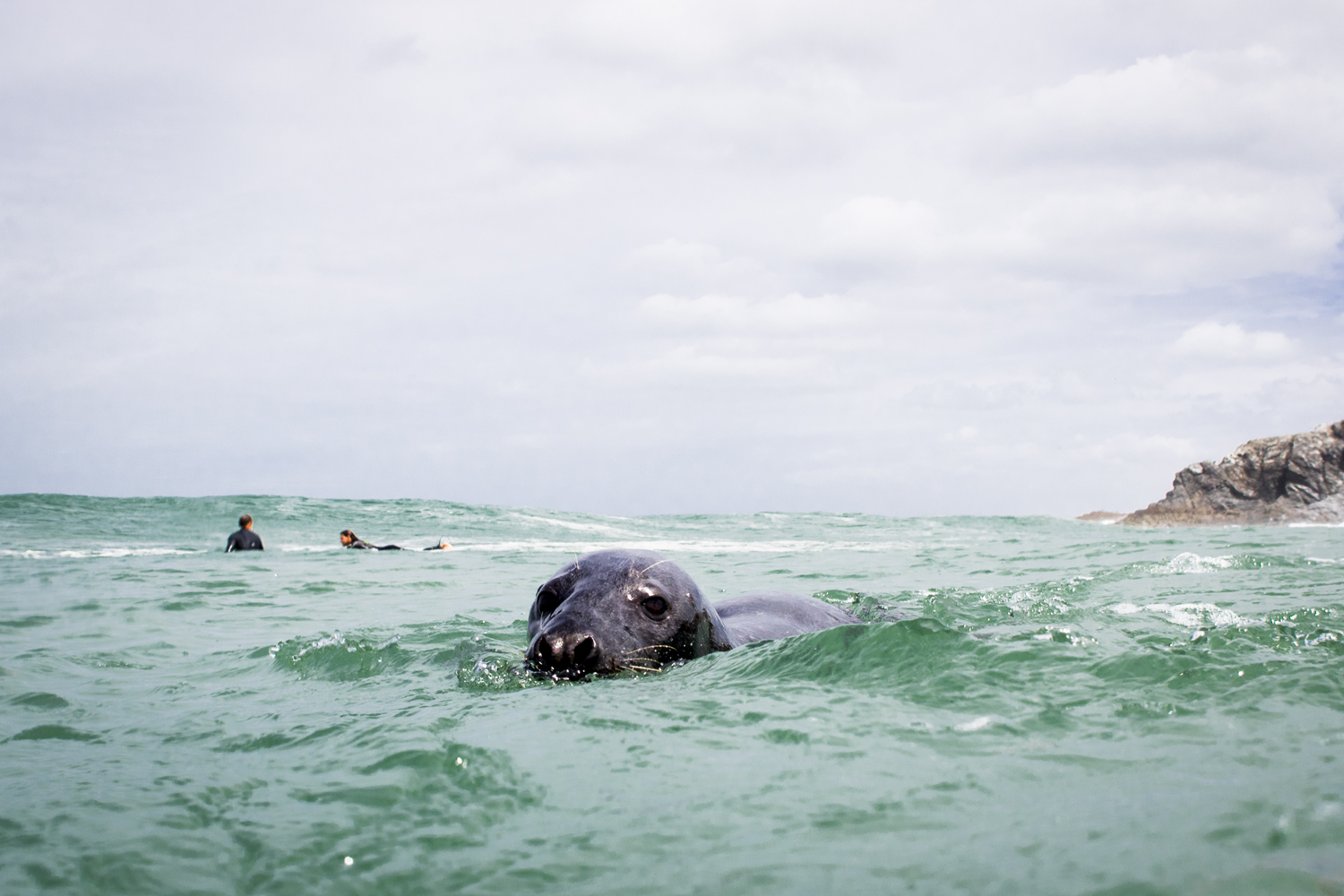 There are certain beachies around Cornwall where it’s impossible to paddle out without being closely monitored by seals. Although almost all encounters with these carnivorous mammals seem to stem from a puppy-like inquisitiveness rather than any sort of wild animal aggression, it’s still hard not to let at least a little yelp when they dive down and bump you from below. 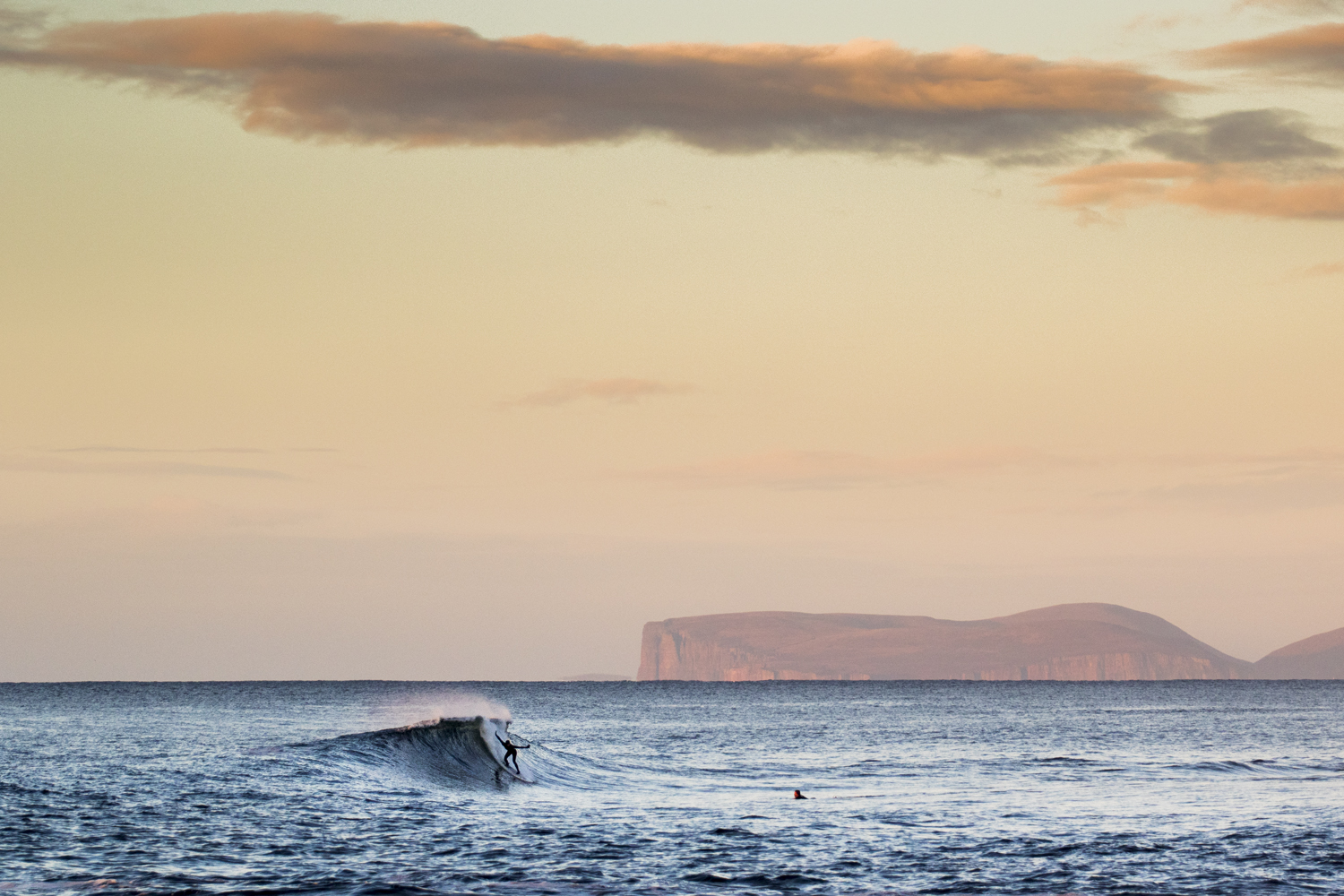 This is multiple times British Champ Lucy Campbell honing her late take off in Scotland. Lucy, who usually competes full time on the QS, used her enforced year out of competition to experiment with different craft and put more time in in heavier waves closer to home. You can find out more about what she’s been up to in this interview we recorded at our drive-in cinema back in August. 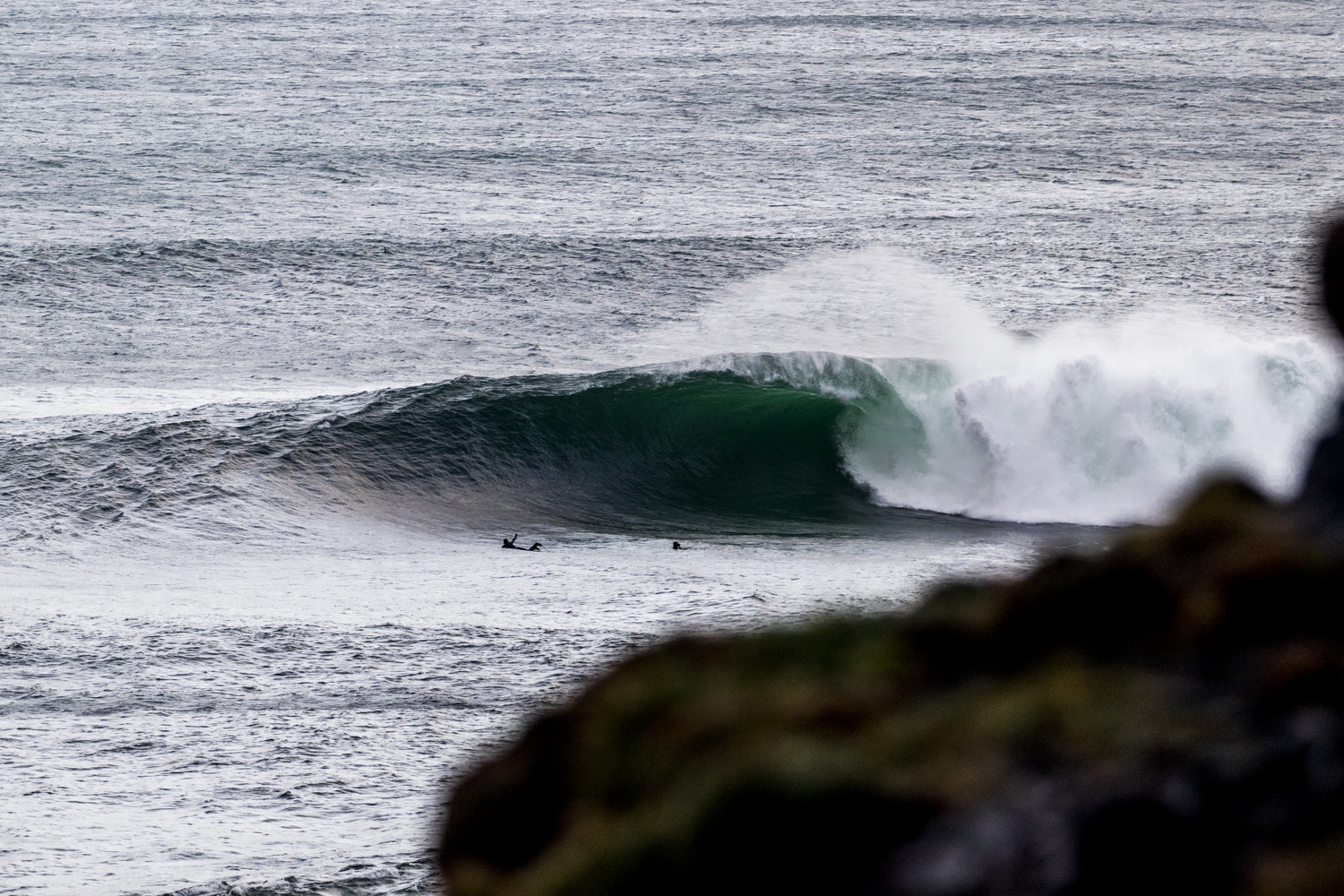 This is Devon’s Taz Knight saluting an Aileens bomb. After three years out with a knee injury (in which time he earned himself a physics degree) Taz returned to big wave surfing in early 2019, moving out to Ireland where he bought up a dilapidated house in Bundoran and set about renovating (read: rebuilding) the place in between bar shifts and sessions at giant Mully. Along with the rest of his sea-faring family, fellow hellman Andrew Cotton and filmmaker Mikey Corker, he’s also been quietly working away on a new film project entitled ‘Savage Waters’ set for completion late next year, by which time hopefully, we’ll all be able to go and see it.

With Christmas fast approaching, we’re here to help you procure the perfect gift for the surfer in your life, or pick out a little something for yourself.    Last week we unveiled [...]

The Importance Of Being Out & About

This is the Importance Of Being Out & About, a full screen feature of fine imagery and intriguing

Welcome to the Importance Of Being Out & About, a round up of fine imagery and intriguing anecdotes from the British winter that was. We've got images featuring the very best action our [...]

A collection of lineups from a Spring mission into the wilds of New Zealand's South Island...

The New Zealand we know is merely the very tip of a mostly submerged continent. Millions of years of tectonic activity have forced it up above the sea, forming two intriguing slithers of land [...]