Home » 5 Things We Learned At The Quik Pro France

The 2019 Quiksilver and Roxy Pros have done what Tommy Shelby, Bobby Ewing and Jesus managed; side-stepped their own death and gone on to scale new heights of fame and fortune.

Earmarked for a cull back in 2017 when Wozzle plans first emerged that the CT was to finish in the Ments in Sept, the rumour was France would either be running in May (hmmm), or get relegated to a QS (yikes!).

We needn’t haven’t fretted. Neither happened, and the Tour’s 6th best event (after Pipe, Chopes, J-Bay, Gold Coast and Bells) or, if you prefer, 5th least fave (after Surf Ranch, Brazil, Portugal and WA) continues to go from strength to strength in this, the first year of its afterlife.

This year, the surf pumped, Hossegor actually broke better than it should have done on a long period west swell, and the buzz on the beach was up there with the Dane / Kelly 2012 epicness, or perhaps even better, if you’re French.

Here’s what we learned. 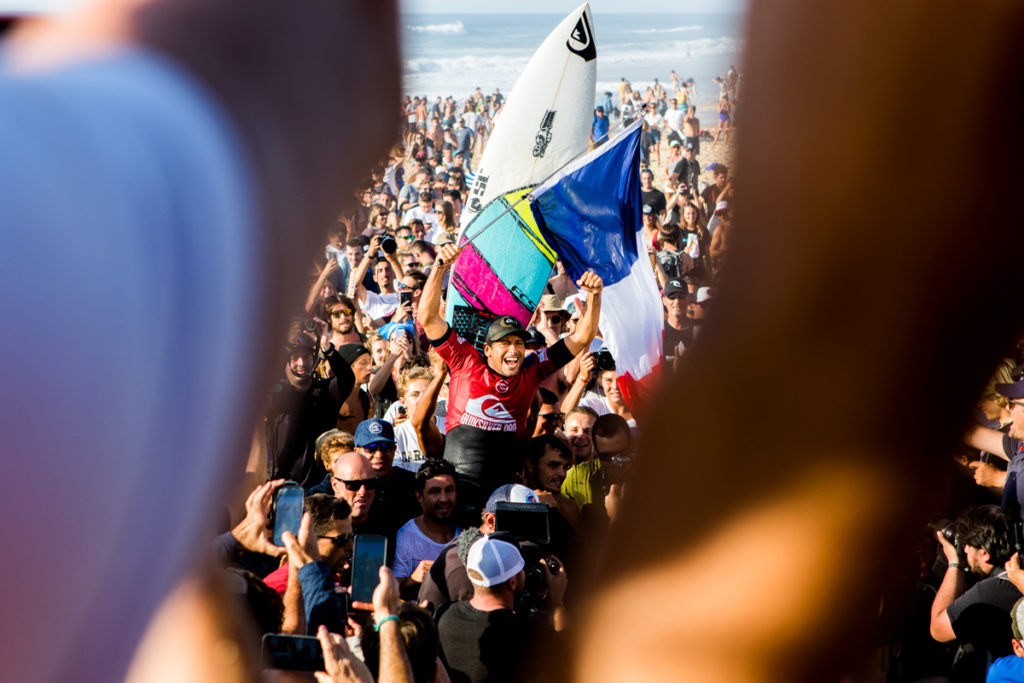 Just before midnight on Friday, Jeremy Flores saluted the assembled masses from the roundpoint where Avenue Paul Lahary meets Avenue du Touring-Club, or if you prefer, in front of Café de Paris.

The road had been closed off entirely, which happens very rarely, and in a DJ booth with Daz and DJ Falcon set up on that very roundabout, Jeremy toasted the crowd, who’d finally been delivered a French victory in the event’s 17th edition. With CT wins including two Pipes, a Chopes and now France, if Flores were to walk away from the sport now, that’s a trophy haul to be mighty proud of.

Flores seems to be getting better and better over the past few seasons, rather than just competing better, maybe having rid himself of any world title pressure burden that plagued some of his early years.

He’s been a somewhat tricky one to settle on, for the non-French surf fan. Admired for his tube chops, respected for being ‘real’ in the Bobby Martinez sense, wherever you stand on J Flo, it was epic to see a home win in Hossegor, in honking Graviere. As the well-boozed crowd outside Paris sang La Marseillaise for the second time that day (after the podium) you couldn’t help but admire that French knack of pulling off things that others wouldn’t get away with.

Imagine a surf crowd singing our awful dirge God Save the Queen (worst anthem ever) on Fore St in Newquay after a Luke Dillon Boardmasters win, or for ultimate vom, the good folk of Lemoore belting out The Star Spangled Banner to a Kolohe victory. 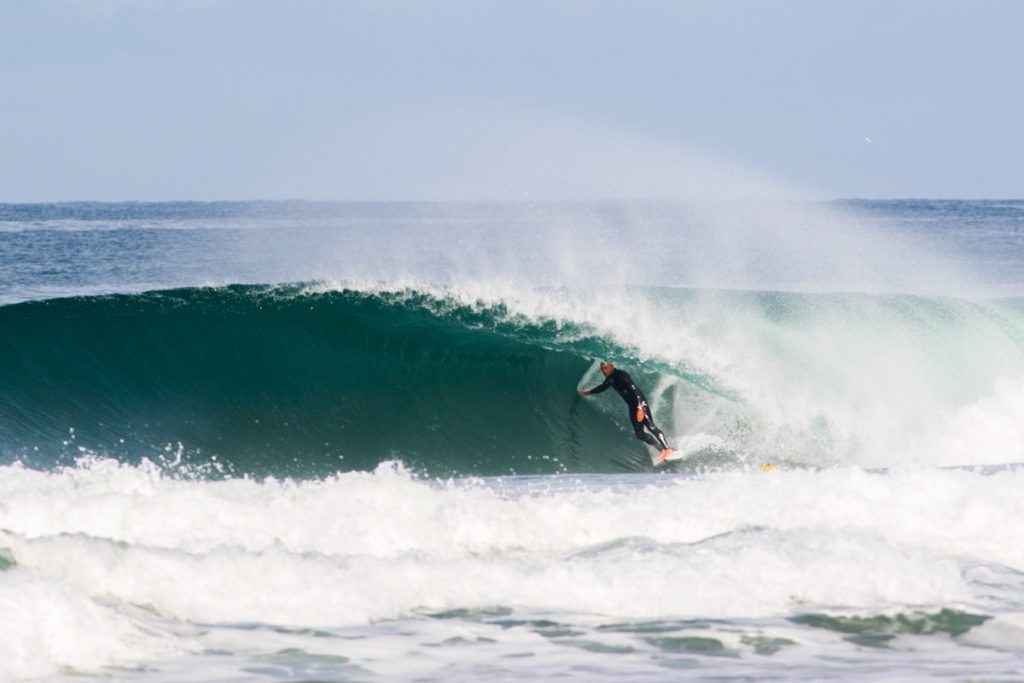 Despite looking shit-hot in the freesurfs, the GOAT crumbled against an in form Leo Fioravanti in Rd 3, lengthening his odds for Olympic qualification. Photo @lugarts

“He’s angry coz he can’t make the Olympics now” said one observer inside the media area as Kelly punched his board having been dispatched by Leo Fioravanti in Round 3 or whatever it’s called these days.

Kelly’s bewilderment at being relatively out of sorts with the ocean matched the general bewilderment of many a so called insider on how the Tokyo 2020 qualification process works. Of course he can still fecking qualify, he just didn’t help his cause much by finishing 17th here and getting overtaken by Seth Moniz (now the 2nd American behind Brother).

C’mon people, if Kelly wins Portugal and Pipe, or either of em, he’ll be going to Tokyo for sure, as one of the top 2 Americans. It aint that hard, is it?

John John Florence obviously can’t advance his cause (he’s still the 2nd American, 5800 points ahead of Moniz, pre-Portugal) until he surfs, which he may or may not do at Pipe, depending on if he needs to. Got it?

Elsewhere, certain surfers did get official olympic qualification confirmations in France: Sally Fitz and Jordy. Neither can be overtaken by two compatriots on the 2019 Jeep Leaderboard, and thus satisfy the CT criteria. No, Lazarus Taxon isn’t an up-and-coming Costa Rican junior with a great air game, it refers to species thought to be extinct, only to be discovered in the wild. Like the Laotian rock rat, (Laonastes aenigmamus) thought to have gone extinct 11 million years ago, found alive and well in SE Asia in 1996.

Mid-way through last week, the WSL website announced “WPS have agreed a 10 year deal with…”

Yep, the major news in that story was that WPS (World Pro Surfers) still exists. The last reported sighting of the pro surfers’ union was an impromptu meeting in Txopos Bar in Mundaka, probably between Jersey surf benfactor Greville Mitchel, Sarge and Kieren Perrow, circa late October 2004.

“We pride ourselves on our close working relationships with our surfers and today’s announcement is symbolic of that,” said Sophie Goldschmidt, WSL CEO. “The 10-year agreement is fantastic in terms of confirming our alignment with our surfers, as we look to continue to deliver the best surfing via our channels and events for our fans and partners, to further build on the significant growth over the past few years.”

The profound philosophical debate I had with a co-commuter friend of my Mum’s at a Berkshire train station about ten years ago that sparked when he said “Yeah but what do we actually need more, orangutans or palm oil?” continued all the way to Paddington, via a change at Reading, and got heated. So I’ll leave you, WL reader, to consider your choice, assuming the world wasn’t big enough for both the WPS and Laotian rock rat, on your own time.

One thing to be said of surfing, in particular organized, competitive surfing on a free to air broadcast is that as a fan you’re not allowed to be indifferent to it. It’s never just ‘ok’. Everything must be heavily polarized, everything vaguely WSL related must either epic, or a total disaster. The commentary is either brilliant or appalling. The waves firing or shithouse. Venues are either Chopes (amazing!) or Margies (shite!). Live comments are either ‘Surf is best life, beautiful waves, aloha from Poland’ or ‘Shame League!’

So what of the Red Bull Airborne? Ironically, an event conceived to showcase, foster and reward the absolute most highly technical nuances of the cutting edge of performance, seemed, this time out in France at least, to have tapped into the generic global beach crowd’s lowest common denominator; the fact that flying kick outs generally get the biggest cheers.

Or, as a former digital publishing boss of mine once said regarding the FB clickbait debate, “Nobody ever went broke overestimating the stupidity of the general public”

And RBA is essentially 95% flying kick outs (ins?). I mean, there’s no point in doing standard air reverses, is there? So the result is, everyone tries to go absolutely massive, and the make-rate is down in the single figure percentages-ish, which I don’t have a strong sentiment about, either way. I watched the first bit at the beach and thought, well it’s ok-ish, isn’t it? 5 and a half out of ten. C plus. Pretty good, really.

The ankle/knee/board death threat of the La Grav shorebreak did make for epic spectator viewing from the water’s edge, where dudes like Matt Meola hucked themselves down into a 10cm layer of foam atop the dry sand berm, like a circus act high diving into a glass of water.

Progression, as we’re constantly told, is not only awesome, but very necessary to the future of the sport. Vital. A bit like constant growth in GDP is to capitalism. Sleep sound, surf fan, your fave Austrian canned drink manufacturer has very detailed plans for both. Despite a shakey performance in France, Medina remains the man to beat heading into Portugal. Photo Masurel// WSL

Late Season Title Race Drama: Europe Did Well To Decide The North Pole Was At The Top

Which way up is Earth, anyway? The way we think it is, north pole up, south pole down? Other way around? It doesn’t matter; it’s autumn in Europe, when the surf’s best, and thus it’s approaching the end of the season for the world title race. Europe, with its two events in October, the tour’s penultimate hurrah before the Pipe showdown, is lucky to be so near the finish line.

Every heat is crucial, every heat matters. Much like how Prem fixtures mean so much more in March than August, so too do some of the early CT events feel relatively whimsical compared to the ultimate tests on French and Portuguese sands. So, the surf journo or even the comments fetishist can go nuclear with the hyperbole.

“Jordy’s fucking choking! Toledo’s just melting… a-gain!” None of these can happen in Bali, because the season’s barely developed pubes by that point.

Who’s got the proverbial brass ring piece? Who can handle the pressure? Aside from frightening surf at Pipe or Tahiti, never can the leading wave riders in the world look so human, so vulnerable than in 4ft beach tubes so close to the end of the season.

Which brings us neatly on to Peniche.