In Spring 1999 I was in West Oz (technically the austral autumn, before the pedants chime) and about to go to Bali for the very first time.

I happened to be staying with Sam & Hannah Lamiroy, who already had plenty of Indo experience under their belts. “Amazing place” Hannah advised, “But maybe not a place to take a brand new boy/girlfriend if you’re still getting to know them …” Oh? “Well, Bali belly is probably a when not an if, so you’re gonna be showering ankle deep in each others’ bum wee” she explained, or words to that effect.

Now the current Mrs Evans and I – kids too of course – are far from strangers to each others’ effluent. So last week, when the kids took turns to projectile shat on the expensive BoConcept sofa (a gift from friends leaving town suddenly) whilst afternoon napping, and vomit on their dinner plates, and the current wife staged a 3am reenactment of the eruption of the La Palma volcano, only with brown magma, we took it all largely in our stride.

Luckily, she’d had the tummy-churning foresight to bunk in the spare room just in case; in fact, even though the danger seems to have passed, she’s still billeted in the sparey, affording me a more spacious and elongated sleep experience in the master bedroom. Every cloud, etc.

I‘ve since been reminded that there are few more powerful words in the French language than ‘gastro’. In fact, it’s one of the very few words nobody has ever had any trouble whatsoever deciphering my accent. Now that post COVID cheek bisous are creeping back into school gate fashion, I’ve found myself absentmindedly throwing in the g word to small talk; the double cheek kiss greeting with other mums first, then: “How’s it going?” “Great! Well, except everyone’s got gastro at our house…” 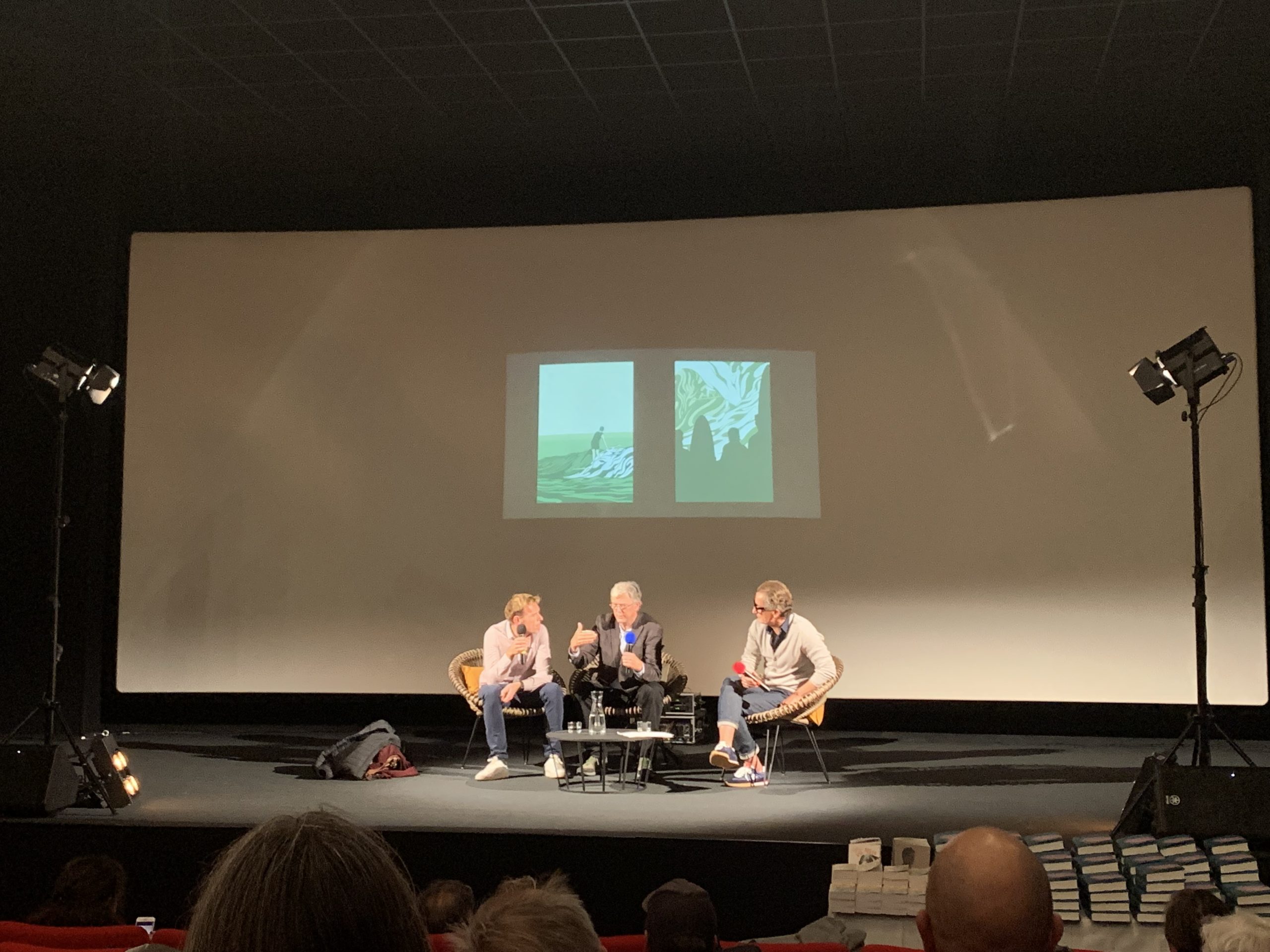 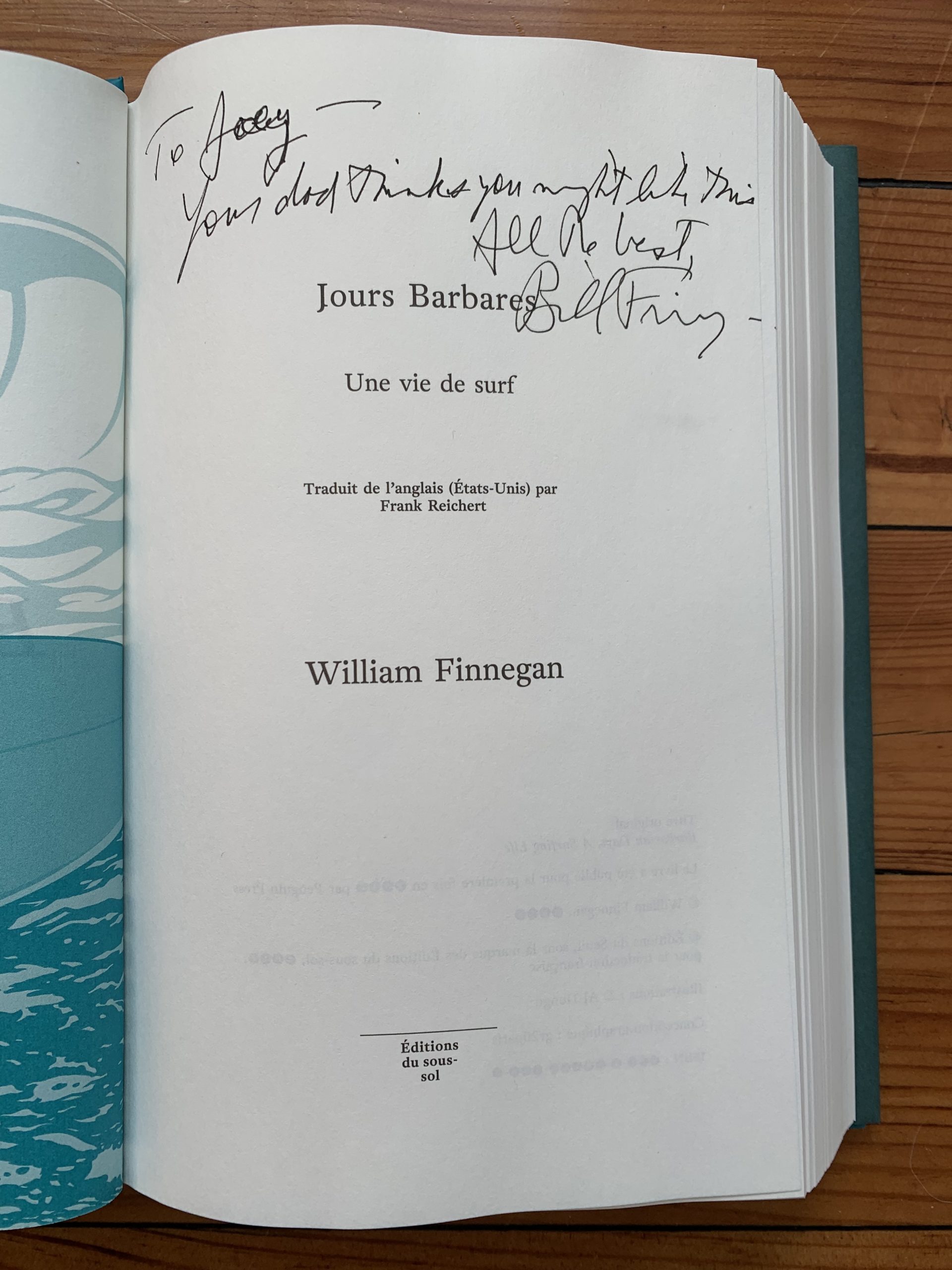 Anyway, there I was on the (since deep cleaned) couch yesterday afternoon, trying to maintain adequate distance from any still-infectious Evanses, and thinking about a cheeky late surf, when the phone rang.

On the other end was Derek O’Neill of Vissla, explaining that William Finnegan – Pulitzer Prize winning author William Finnegan, for his epic memoir Barbarian Days – was appearing at Hossegor cinema at 4pm (approx 20 mins’ time).

And, he added, admission was free.

I let the wife out of isolation, briefly, to help me look for my copy of Barbarian Days, frantically. After ten minutes violent searching, we gave up. I zipped up my dad’s old Columbia Sportswear Microsoft Dublin Spring Conference cagoule, (also 1999, coincidentally) and peddled north around the harbour, in light drizzle.

A small gathering of mainly well dressed older crew was assembled for the semi secret book publicity event. A French Basque Country legend explained he’d been foiling the recent giant swell at the island off Mundaka, the same legend who ruptured another surfer’s spleen with his leashless SUP at Parlementia a few winters back.

The talk was interesting, informative. A new French hardback collector’s edition within illustrations by AJ Dungo has just been released, hence the appearance. My favourite part was Finnegan’s general dislike for surfing’s modern proliferation, coupled with his own fairly watertight defense, when pressed on his own role in it, “I’ve never met anyone who said they read the book, then took up surfing.”

Technically speaking, Ive never met anyone who said they’d read Wavelength, then taken up surfing either. Just one of many similarities, I guess.

There were some good questions at the end, I thought about it but didn’t put my hand up. I wanted to ask Him something about the chapter about the In Crowd, but remembered that when former protege Billy Wilson interviewed Finnegan for Surf Europe, Finnegan’s first email read “These questions, not to put too fine a point on it, are shite”. *

Derek and I queued up at the end for a signature. A guy in front didn’t want to cough the 27 bucks for a copy, so got Bill to sign one of the paper bags that people buying the book got.

You have to respect the exquisite tightness, espesh seeing as it was free entry.

Another, just before our turn, with hair tied back in a bun, long overstayed his Finnegan one-on-one time. After a full ten minutes of what should have been a 30 seconds polite greet, flourish of ink on an opening leaf, turned into him showing poor Bill Minutes of wretched footage on his phone from some lefts from the other day, then some rights. Fuck me. Then a selfie, then a full 500 word dedication for him, then another for girlfriend.

The next film were already taking their seats, the book sellers had packed away the unsold hardbacks and the card machine. A perfect example, surely, of why Bill doesn’t want more people to start surfing.

A woman in the queue behind me flat tyred the delay. I did too, then realized I knew her. She works for the Wozzle.

She asked me what else I did, other than commentary. “I’m a writer, actually, (Am I gonna say it? Am I gonna say it?)… just like, er (pointed at Bill). Luckily, man bun man had Bill in his thrall. Plus, Bill had inadvertently compared himself to James Joyce during the chat, anyway, so…

Plus, crucially, I was out of earshot.

Not even a flinch.

And with that, I wiped the icy drizzle off the saddle, and melted into the dark, cold night.

"Because I am happy at sea and perhaps to save my soul" There are different ways of honing your own surf-tinged strand of eco-woke awareness. It could be through time spent gorping at the News [...]