Home » A Blueprint For A Happy Lockdown With Nic Von Rupp

A Blueprint For A Happy Lockdown With Nic Von Rupp

From the jet setting pro to the humble weekend warrior, the current lockdown demands a major adjustment for surfers from all walks of life.

We’re all trying to strike the balance between isolating as much as possible to help slow the spread, maintaining our mental and physical health and not descending into long periods of solitary housebound day drinking.

With this complex balance in mind, we hit up the beacon of positive energy that is Nic Von Rupp to find out how one of our continent’s best big wave hellmen is spending his time holed up in quarantine.

Nic happened to be putting the finishing touches on the second episode of his new series ‘Von Froth’ when we spoke to him, playing here alongside his answers, which we reckon form a pretty good blueprint for happy locked-down living:

Try and enjoy the downtime.

“I’ve been locked away for three weeks mate,” Nic began. “It’s like a complete contrast to how I was living a month ago. Winter is really intense over here you know, especially at Nazare. You’re constantly chasing swells and surfing big waves and it gets to a point where it wears you out for sure, because you’re adrenaline levels are always really high. As much as I love it, it’s always good to have a break.”

“I’ve haven’t just sat on the couch and watched movies for years,” he continues. “I feel like I’m back to my childhood. It’s got its positive sides and negative sides, but it’s nice to chill a little bit, because this year has been so active.”

While few of us spend our lives chasing massive waves around the world, most of us have got our own version of a hectic schedule. If you’re able, try to use this time like Nic, for a bit of forced R&R.

Obviously that’s much harder if you’re still juggling work and kids. But whatever situation you’re in, there’s value in letting go of all the stuff you feel you could or should be doing and just allowing yourself to relax in the way you want to sometimes.

Of course, you should be a little bit careful you don’t turn into the grandparents off Charlie and the Chocolate Factory, but if you want to spend the morning sat in bed watching shit on Netflix, don’t berate yourself for it. There’s still plenty of time in the day for yoga/ mindfulness/ making snide remarks at your cohabitors/ arguing about 5g conspiracies on facebook etc.

Focus on a project.

Been wanting to learn a language, plant a veg garden or create a speaker system from a bit of tree? Well now you can! Time and youtube are really the only resources you’ll ever need.

“There’s been a lot of eating and a lot of cooking happening,” says Nic of his household. “I’ve been pulling out my Jamie Oliver and doing some cool dishes I never thought I’d be able to do. I also stole a piano from my parent’s house. I used to play when I was young and my goal this year was to get back on it, so it’s perfect timing.”

“It’s a good time to get to know yourself,” he continues, “I want to do online courses, I want to start editing and know more about photography and the backdrops they use. I think everyone needs to go inside of themselves and think about what areas they want to go into depth with, because that’s how time flies.”

Nic has also been using the time to work on editing his new youtube series, Von Froth.

“That’s my nickname,” he tells me of the title. “I think it was invented by Tom Lowe and since then everyone’s just called me that, because I’m always frothing.”

“It’s a vlog about my life and the people I hang out with. It’s pretty simple, no major plotline, just some vlogs, talking shit, surfing big waves, chasing swells, just a real perspective of what goes down.” 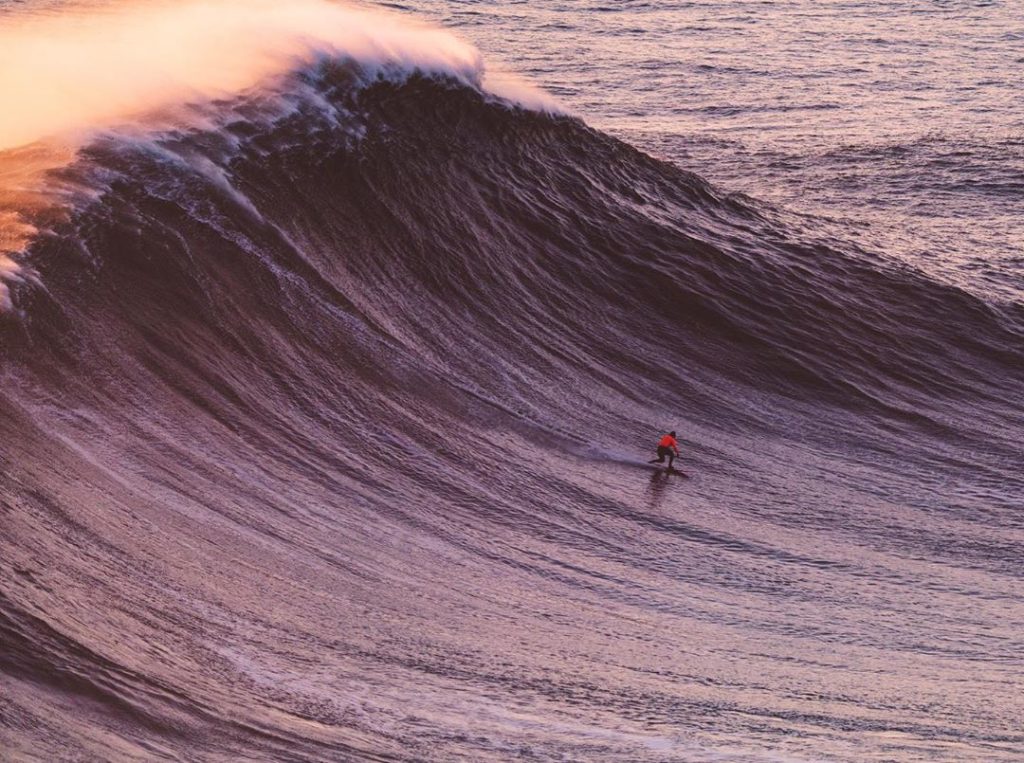 Nic on a sunset mountain at Nazare. Photo @helio_antonio

You’ll be hard-pressed to find a quarantine advice article that doesn’t suggest exercise, complete with a link to a workout channel. So why buck the trend? We’re all in this together after all.

“It’s important to do lots of activities,” says Nic, “because sitting on the couch and not doing anything is not going to help your mental sanity.”

“I’ve just been trying to act like it’s a normal day. Wake up early, have breakfast, do some work, then, if there are waves, I’ll head out for a little shred sesh. In Portugal, everyone that’s a professional surfer is allowed to get in the water. I try not to set a bad example and I don’t want to be surfing while everyone can’t, so I just head out for a quick hour when it’s really necessary to keep me sane.”

“Then, I’ve been working out in the afternoons, going for a run, or coming back and working out with my trainer. We just launched an instagram page actually- where we’re doing some live training on @newlineperformance, so you can just follow along and do some exercise with us.”

Looking forward and appreciating things you once took for granted.

Without an end date, it’s unhelpful to pin our hopes for future happiness on the return to normal life. However, without getting too Big Yellow Taxi about it, when things are taken away, it certainly helps us appreciate stuff we once took for granted.

“I’m just excited about the simple things,” Nic says of a lockdown-less future. “Just to be able to just travel, hang out with my friends, hug my family. I haven’t hugged my dad in almost a month, so that’s what I’m looking forward to.”

Just how much we’ll savour those little things – like a surf road trip with your mates or dinner with the family – might be one tiny silver lining on this whole sorry Corona cloud.