It’s that time of year again when a battalion of QS warriors parachute into Newquay for a week of battle in Fistral’s August slop.

In keeping with tradition, had they have been here a few weeks earlier they would have enjoyed Cornwall at its very best with July serving up numerous days of sunny skies, head high waves and offshores.

However, the Huey is rarely kind to the Quey and what faces them instead is a veritable mix of what commentators diplomatically term ‘challenging conditions’, and the rest of us call shit/ flat/ absolute victory at sea. It’s hard to predict the future, especially when it comes to the weather, but we’re going to have a crack anyway.

Here’s a breakdown of the forecast:

Wednesday looks to be the safest bet in terms of contestable waves, with a shoulder to head high short period windswell thoroughly ruffled by a strong westerly wind. It won’t be pretty, by any means, but with an alternating series of holes and shallow banks throughout the tide at Fistral, some heats will get lucky with a few rippable sections. The weather looks mainly sunny, with a bit of cloud.

Thursday will see the switch flip with small waves in the knee to waist high range. It will likely be super wobbly in the morning as the remnants of a week of onshore junk will take a while to be brushed away by the stiff south easterlies. The afternoon could see clean, contestable conditions for the longboard comp though. The weather forecast says there’ll be plenty of rain.

From Friday onwards there’s a bit of disagreement around size and swell direction among the various forecast models, but they all agree on one thing; it’s going to be howling! The wind starts to build from the SSW from Friday lunchtime onwards, getting up to 25mph with 40mph gusts by the evening. 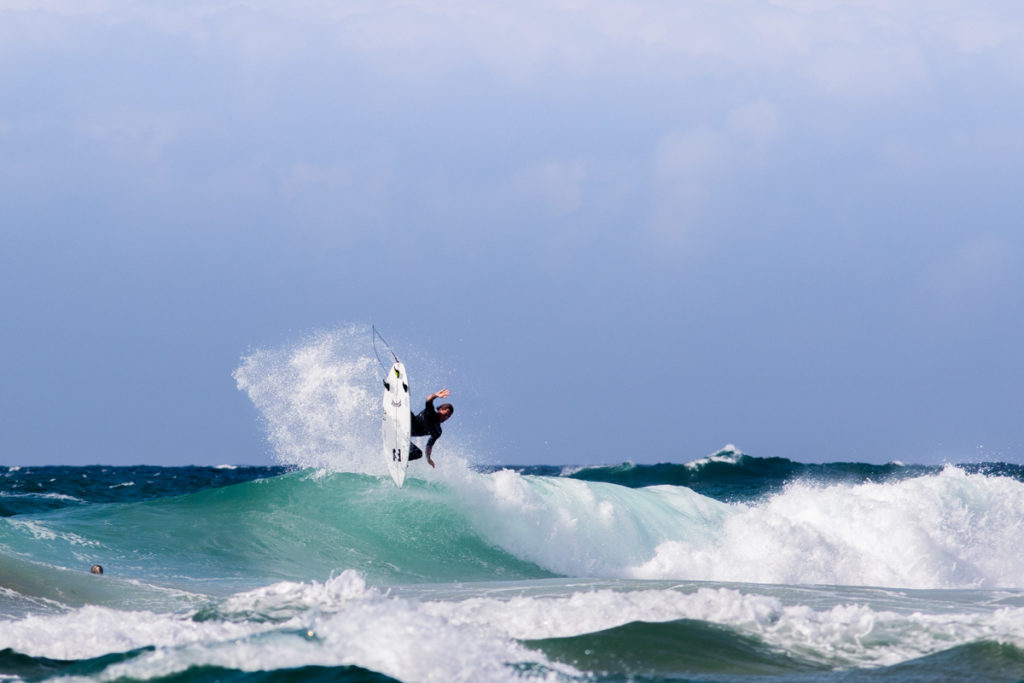 In terms of swell, a solid, long period pulse is forecast to fill in through the day on Friday. However, due to its extremely southerly direction, actual wave heights will be significantly smaller than the forecast swell height. Fistral does like a south swell though, as long as it comes through with enough size to wrap into the bay, so if the forecast holds the evening could see rippable wedges in the shoulder to head high range. The SSW wind should produce fairly clean faces, even at the strengths predicted. The weather forecast suggests a mixture of sunny spells and heavy rain.

Saturday will see both swell and wind direction switching more to the west, increasing both the size and junkyness of the waves on offer. The wind will also kick up a notch, with gusts reaching the 47mph by the afternoon. Expect solid walls of white water as far as the eye can see and – if they choose to run (which we hope they do) – a series of entertaining duals probably won by anyone who can make it out the back and get to their feet. The weather is again set to be a mixture of sun and rain.

Sunday sees a drop in swell size with strong onshore winds persisting. Once again, it’ll be ugly, but just about contestable with a mixture of rain and sunny spells providing the backdrop.

So there you have it, grab a windbreak with some peepholes and an industrial anchoring system and we’ll see you on the beach!

Cover: Sorry, it ain’t going to look like this. Photo @lugarts