Home » How Did Brazil Become The World’s Best Surfing Nation?

How Did Brazil Become The World’s Best Surfing Nation? The Long Read: We take a deep dive into the vast array of factors and circumstances that converged to create the Brazilian storm.

In 2019- just a mere half-century after a Brazilian first stepped foot on a modern surfboard- it’s almost impossible to argue that they are not the world’s best surfing nation.

Over the last 5 years Brazilian’s have notched up four world titles, a big wave world record and more men’s championship tour wins than any other country. For the second year running in 2019, they’ve got the most surfers on the men’s CT and if you delve into the worlds of bodyboarding, performance longboarding and adaptive surfing, it turns out these achievements are just the tip of the iceberg.

While Brazil has had a presence on the world tour since its inception- and enjoyed a modicum of success throughout this short history- its status as the world’s surfing superpower has only been cemented much more recently, leaving many pondering the reasons for this sudden and unprecedented rise to dominance.

If you ask the question in a beach car park, the answers offered will usually involve the words ‘hunger’ and ‘favelas’. The ‘impoverished underdogs’ narrative is an attractive one that sports fans often gravitate towards and while there are some inspiring rags to riches stories among the Brazilian contingent, many of the current crop- including two-time world champ Gabriel Medina- in fact, grew up in distinctly middle-class homes.

When you take a deeper dive, it turns out a burning passion for victory and the spoils it brings are just one of a huge multitude of factors behind the emergence of the Brazilian storm. 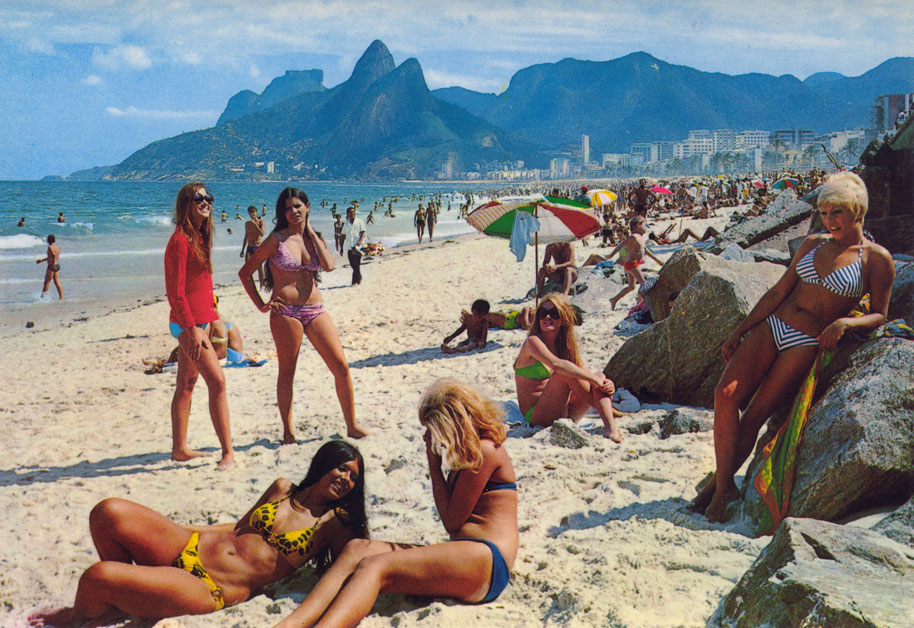 The girls at Ipanema Beach in the 1960s. Photo Seeley, via eayearbooks.com

The first few decades of surfing’s development in the country look almost indistinguishable from other hotspots around the world. The 60s saw the emergence of modern surfing, after Rio locals started building boards, first from wood and then from styrofoam, using images from foreign magazines as guidance. While the scene was as countercultural as anywhere during its earliest years, Brazil is a country quite obsessed with organised competitive sport and it didn’t take long for a Rio surfing federation to be established and contests to be organised.

As the 60s became the 70s, hostility towards professional contests was growing elsewhere in the surfing world, lead by anti-hero icons like Miki Dora and Wayne Lynch, who decried the strict rules and corporate interests that accompanied the events.

However, during the same period in Brazil almost all were welcoming them with a warm embrace and by the mid 70s, surfing was officially recognised as a sport by the National Confederation.

In 1976, the South American nation became one of only six countries to host a stop on the IPS circuit; the very first incarnation of a world tour. In its maiden year, the event was won by a local Brazilian named Pepe Lopes who went on to gain a wildcard to that year’s Pipeline Masters, where he made it to the finals, beating future world champions Shaun Tomson and Peter Townend in the process. 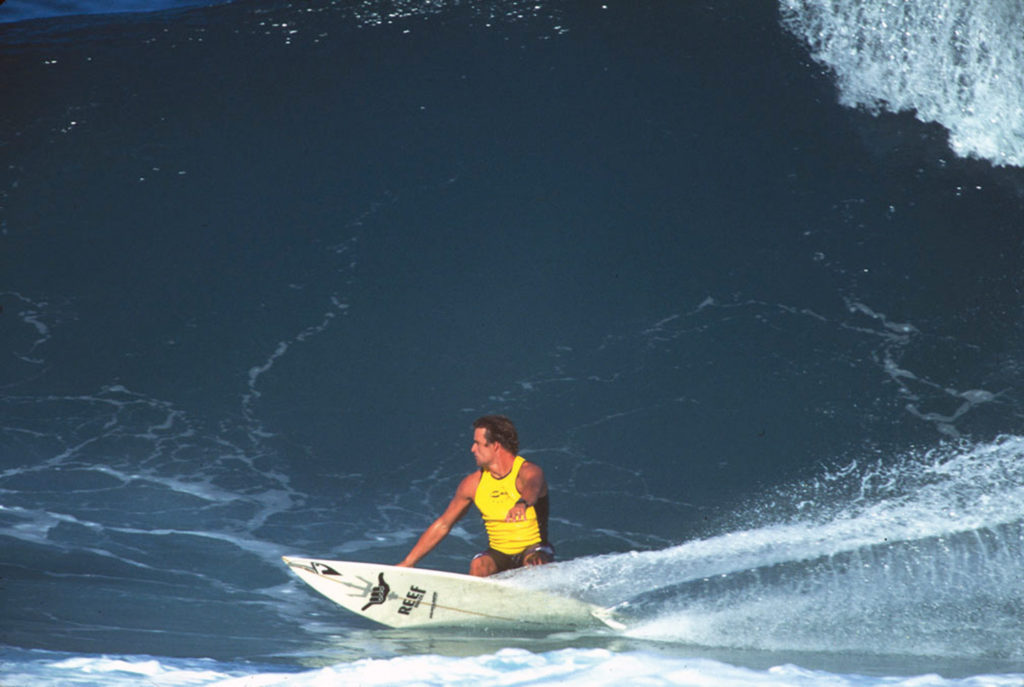 Flavio Padaratz off the bottom at backdoor. Photo Jeff Divine

By the late 80s, the scene was set for surfing’s popularity to explode. The nation had two comps on the CT circuit, as well as two tour surfers to scream for; Fabio Gouveia and Flavio Padaratz. There was also a burgeoning domestic surf industry, led by brands like Hang Loose and Mormaii wetsuits, who sponsored dozens of surfers and poured cash into a healthy circuit of national comps, where coaches and talent scouts roamed the beaches looking for the next big thing. The national media had also caught the bug, with surfing appearing regularly on the box, featured in everything from news segments to soap operas.

The sport’s soaring popularity was also owed- at least in part- to a set of hugely favourable geographic and cultural factors. Consider for example, the sheer number of people who had access to Brazil’s 4.6 thousand miles of coastline and the ultra-consistent waves which broke along it.

In 1985 the coastal cities of Sao Paulo and Rio already housed a combined population of 23 million people and the numbers were growing rapidly. Then there was Florianopolis, Santos, Recife and numerous others, which all sprawl back from the coastline, boasting huge populations and similarly consistent waves. Consider also Brazil’s perfectly surf-friendly climate. Almost every day of the year sees 12 hours of daylight allowing kids- who conveniently finish school at noon- to surf for a solid six hours between home time and sundown. The air and water temps remain in the 20’s all year round in everywhere but the far south and the surf is almost never flat.

Then there’s the nature of the urban areas. Thanks to a lack of open spaces in the densely populated cities of Rio and Sao Paulo in particular, the huge populations naturally convened on the beaches where youth, beauty and surfing could be found swaying hand in hand at the vanguard throughout the 70s and 80s.

By the 90s there was a steady stream of talent making their way onto the QS and while some Aussies, Americans and Europeans struggled with the brutality of a priority-less heat, the Brazilians took to the more cutthroat aspects of the sport with aplomb.

“Brazilian surfers, from the beginning, were serious about competition,” explains Matt Warshaw in the Encyclopedia of Surfing. “The model, of course, was the Brazilian national soccer team, with its collection of World Cup trophies and its roster of legendary players, past and present. Soccer—along with Formula One racing, another Brazilian speciality—gave surfers not just a huge dose of national sporting pride but a sense of destiny.”

Brazil’s culture of sporting fandom found surfing as soon as they had a dog in the fight and it wasn’t long until huge crowds were turning up to every event to flag-wave and chant their heroes to victory. The arrival of these baying mobs back in the day, along with accusations that the Brazilian surfers were brash, aggressive, arrogant and lacking in etiquette, rubbed the Aussie / US-centric surf fraternity up the wrong way, marking the Brazilians out as the enemy.

Through this combination of national support and hostility from the rest of the globe’s surf fans, the Brazilians were endowed with even more motivation to succeed and prove their detractors wrong. While this sails a little close to the ‘wanting it more’ explanation, an inferiority complex is as good a motivator as any when forcing yourself to send it over the ledge on your first solid day out at Chopes. 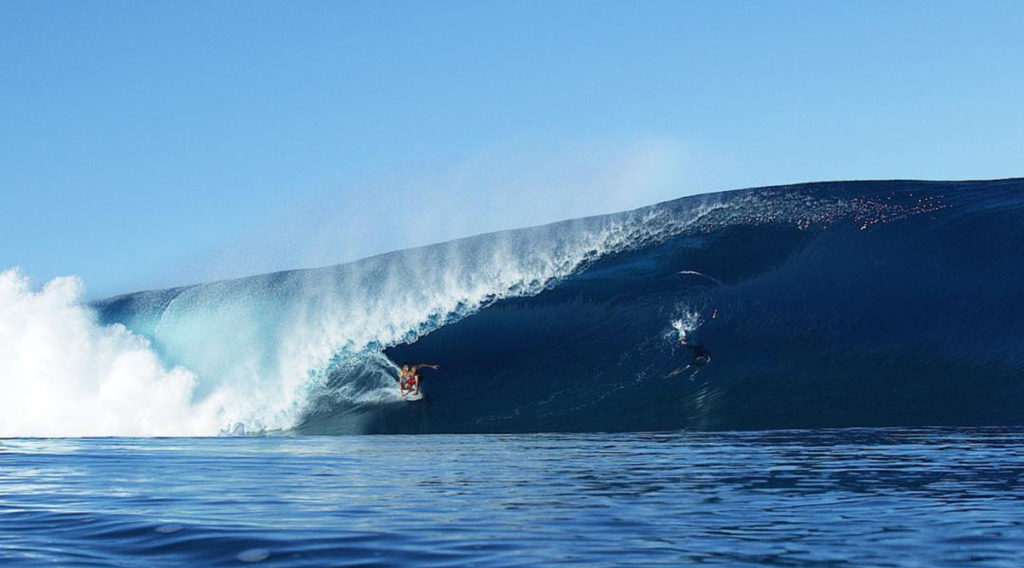 After Filipe copped an internet shit storm for not taking off on a single wave during a macking heat at Chopes, he returned to the break for an extended stint facing down his fears. Photo @baronisfilms

This hostility and a perceived lack of style among Brazilian surfers lead the international magazines and filmmakers to keep them out of their media.

By the time the likes of Ferreira, Medina & Toledo were coming of age, America and Australia’s top young surfers already had a whole raft of counter-cultural free surfing icons tempting them away from the QS grind, towards a life of beer-swigging and Indo boat trips. The Brazilians, on the other hand, had no such national role-models. If they wanted to make it as a pro surfer, as so many of them did, there was only one to go about it; start competing as young as possible, and don’t stop until you reach the top.

The country’s talent pool grew exponentially throughout the early 2000s, and- against a backdrop of unprecedented political stability and economic growth- the infrastructure needed to turn that talent into world title contenders also began to fall into place.

Today’s most successful Brazilians can be put into one of two categories. Either they had a parent already interested in the sport; an ex-pro surfer in the case of Toledo, a CT level coach in the case of Dora and a surf shop owner in the case of Medina- ready to foster their talent, or they were scouted and taken under the wing of a man named Luiz Campos, AKA Pinga.

Pinga grew up surfing in Rio, before starting work in the surf industry in the mid-1980s, holding top positions at Quiksilver and Oakley, before branching out to start his own sports management and marketing company called The Box Sports. For 30 years, he’s been attending regional Brazilian surf comps, scouting for young talent to join his elite team. It’s likely you’d never have heard of names like Jadson Andre, Caio Ibelli, Adriano De Souza and Italo Ferreira were it not for Pinga’s careful intervention. 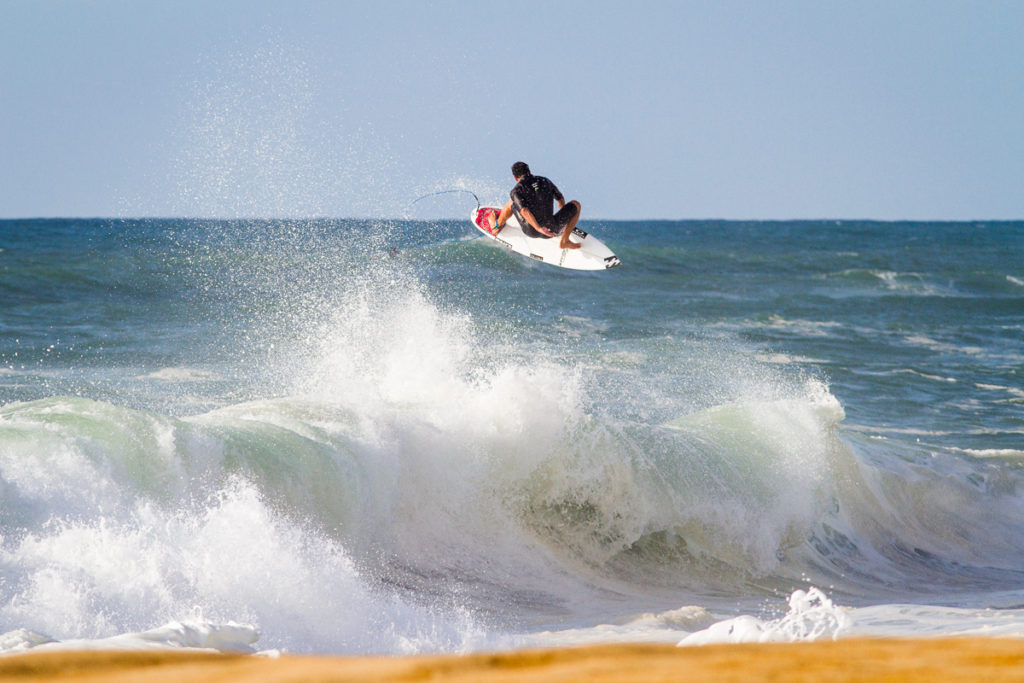 Italo Ferreira continues to set the standard for aerial surfing on tour. He tweaks a huge frontside air in a French shorey. Photo @lugarts

His process was simple. Find a talented grom, pair them with a sponsor via his extensive network of industry contacts, then use their salary to put them into private school, teach them English, how to compete and how to manage their newfound cash flow. It was a meticulously designed program and after Adriano- one of its first graduates- became the first Brazilian to win a world title, there was little doubt that it worked.

With the talent and the support network in place, all the Brazilian’s needed was a leg up onto the complex and costly world of the QS circuit and in the late 2000s, the tour came to them.

Between the years of 2008 and 2011- just as the current crop of stars were putting their nose to the grind- the country played host to more high ranking QS events than anywhere else in the world, peaking in 2010 with a whopping 66,000 points up for grabs across 11 different events. (Hawaii was next in line, with 42,000 points over 7 events.)

These events offered Brazilians the chance to compete against the world’s best- accumulating valuable points and winning serious prize money- without the sky-high travel costs usually associated the tour. Then, of course, there was the home-court advantage, which was capitalised upon royally, with a Brazilian winning over 50% of these local QS events over the three year period.

This sudden influx was neither accident nor grand conspiracy, but rather a concerted effort by the WSL, Brazil’s government and a selection of national brands to promote Brazilian surfing. And as you already know, the plan worked perfectly, with Gabriel Medina, Filipe Toledo and Italo Ferreira each acquiring their first major result at these local comps, a year prior to committing to the QS full time, allowing them to show their sponsors they were worthy of the travel budget required to launch their qualification efforts in earnest.

Now, it’s important to note that none of the reasoning offered here is to deny the incredible talent of the individual surfers. The point instead is to explore the under-reported context that cultivated that talent. And while each explanation offered may seem insubstantial in isolation, when taken all together they make up a perfect confluence of events and circumstances that have changed the face of professional surfing forever.

And I guess that’s why they call it the Brazilian storm. 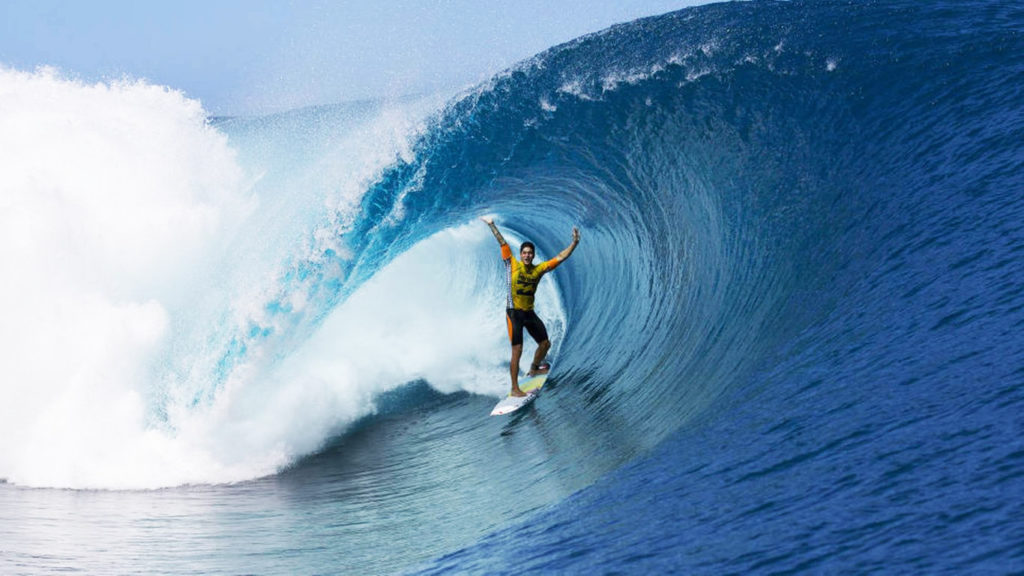 Medina sails through a huge Teahupoo drainer on his way to his maiden world title in 2014. Photo Scholtz // WSL