London surfers rejoice! Everything we know so far, here:

It’s very early stages, but it looks like North London might be set to get its very own inland surf destination!

The plans were unveiled today by Lee Valley Regional Park Authority, working in collaboration with inland surf specialists The Wave, the company behind the Bristol wave pool. The team have earmarked a site in Edmonton, North London, which takes just over an hour on the train to get to from South London (good luck users of the N155 bus, who may one day soon be regularly sharing it with a gaggle of Clapham based Aussies, armed with coffin bags).

The next step is extensive site testing and overall impact assessment, with a view to putting a planning proposal together in the not too distant future. While some of the numerous wave pool proposals we’ve seen flooding in over the last few years seem a little harebrained and unlikely to get off the ground, Lee Valley, working together with the Wave, seem perfectly placed to create such a facility. They already own and run three London 2012 Olympic and Paralympic Games venues, including a whitewater rafting centre, Velo park and a hockey and tennis centre and are likely to be well abreast of all the hoop jumping required. 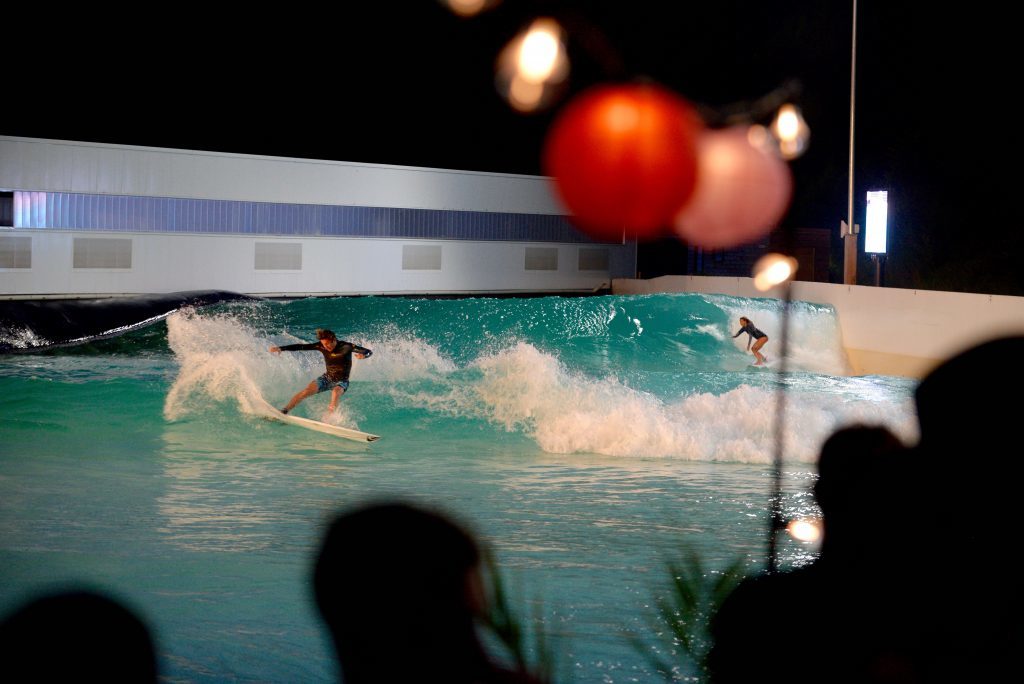 After work floodlit surfs in the big smoke are almost within reach! Photo Wavegarden

The new wave pool, which would utilise the Wave Garden Cove technology, is just one part of a much larger proposed development plan:

“The Wave London could feature other elements, such as a high-performance surfing and skateboarding centre, health and rehabilitation, cycle trails, high ropes, and glamping accommodation,” the team said in a press release.

“These proposals have the potential to create a stunning new regional leisure hub bringing health, fitness, sport and outdoor activities to millions of people along with many new jobs.” added Shaun Dawson, Chief Executive of Lee Valley Regional Park Authority.

“Lee Valley Leisure Complex was once a sewage works and rubbish dumps. A generation ago we built what was then Europe’s largest leisure centre. Now we hope to bring inland surfing here to create an outstanding new leisure destination for the capital and the region. This marks another exciting chapter in the history of the Lee Valley.”

While it’s a bit early for Londoners to start waxing up those dusty sticks, this news marks an exciting start point for what will hopefully become the world’s first capital city based surf facility.

Want all the latest on The Wave Bristol’s progress? Click here for an exclusive interview with company director Nick Hounsfield.