A innovative approach to foamie production deemed so revolutionary it recently raised £350k of investment in one day...

Over the last few years it has become clear that individual innovations are the best route to solving the abundant environmental issues that exist within surfing.

While fibreglass boards are a scourge on the environment, the far more disposable, novice friendly foamie also poses a serious issue. Every year thousands of surf schools around the world throw away foamies that have suffered irreparable wear and tear after a season being firmly put through their paces by first time surfers. A few years ago, surf school owners Ricky and Chris Martin decided they’d had enough,  setting out to create the most robust and environmentally friendly soft-top on the market under their company Skunkworks Surf Co. 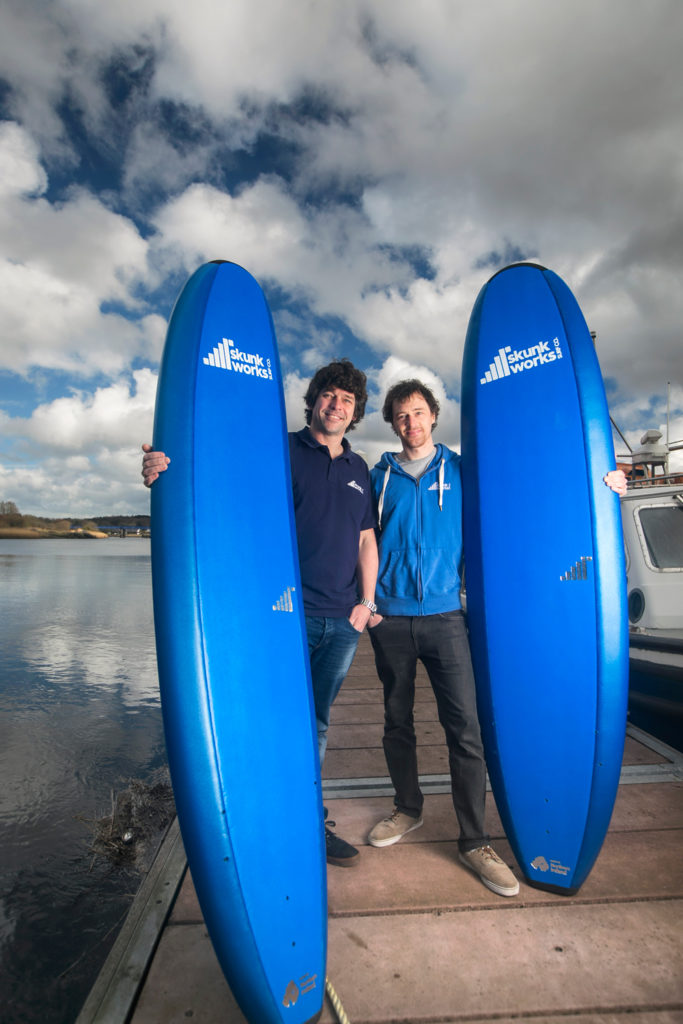 “The biggest surf school expense is the annual replacement of boards due to the poor quality of products in the marketplace.” they said. “Failure occurs from the use of glue and poor quality materials. Glue hates everything about surfing from sun to sand and saltwater.”

In order to combat this, the brothers started work on a foamie production process that completely eliminates the need for adhesives, providing a stronger more durable board that will last longer than any before it. Not content with a revolutionary product, the pair set up their manufacturing base in Northern Ireland and set themselves the ambitious target of going entirely waste free by 2020.

“It would have been easy for us to go to China and take advantage of cheap materials and cheap labour” said Ricky, “but we insisted we wanted to create a company which manufactures our surfboards on the North Coast of Northern Ireland.”

Earlier this year they offered investors the chance to get behind their innovative new product on CrowdCube and scores instantly jumped at the opportunity, helping Skunkworks smash their initial target of £350,000 and reach a whopping £405,000 in just one week. There’s still 18 days left of the campaign, and the company is hoping to hit their new target of £600,000.

Indeed, Skunkworks’ groundbreaking designs have a history of catching the attention of top business players. Last year they came second in a business innovation competition held by Richard Branson and partnered with Jaguar Landrover on their Waste To Waves campaign, which saw them create a surfboard made entirely from recycled foam, which was then tried and tested by British ripper Lucy Campbell.

Since then, the company have gone from strength to strength, however, in terms of long term goals, they’re just getting started.

“Our plans are so exciting for the future with new products in the pipeline, we are getting a new e-commerce site which will be launched this summer and our new leash has been put through rigorous testing and we believe it is the strongest leash in the world.” said Ricky.

“Last year we shipped over 600 boards to surf schools through Europe and further afield.” added Sales and Marketing Manager Ashley Douglas. “We aim to multiply that figure by six this year and build long term relationships with our customers who see our approach to customer service as a breath of fresh air for the industry. We are bringing manufacturing back to Europe where there is accountability, traceability and a high level of workmanship.”