Home » California Shark Attacks Are On The Up, But Is Expensive Technology The Solution?

California Shark Attacks Are On The Up, But Is Expensive Technology The Solution?

"My body was literally being held together by my wetsuit." recounts Californian attack victim Maria Korcsmaros

In the summer of 2016, personal trainer Maria Korcsmaros was attacked by a juvenile Great White as she completed the first lap of an Ironman training session.

“It just came out of nowhere and then it was gone in a flash,” she told The Canberra Times of the ordeal. “I knew I needed to get out of the water, I was kicking furiously in case it came back. My body was literally being held together by my wetsuit. But I got lucky, there was a lifeguard boat close by and they got to me within 20 seconds and saved my life.”

It was the first attack ever recorded in the City of Newport Beach in California’s Orange County and incidents throughout the county have been rising ever since. 2017 was dubbed the sharkiest year ever by media commentators after nine unprovoked attacks occurred along the west coast of the US. However, while the number of encounters since 2010 is up on the previous decade, fatalities actually reduced.

The influx in activity has understandably prompted calls for the local government to provide solutions, with Aussie surfing legend Ian Cairns becoming a prominent voice in the debate. 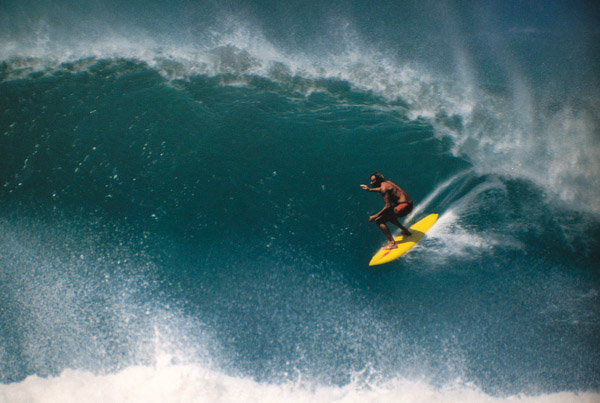 Ian Cairns is right at home in waves with a bit of juice. Photo Jeff Devine// Encyclopedia Of Surfing

Cairns, who hails from Perth, WA, founded the ASP back in 1982,  pioneered many of the waves around Margaret River and is credited as one of his eras best power surfers. He was once described by Wayne Bartholomew as ‘a strong-minded son of a bitch’ and a ‘a brilliant politician’. In the early 1990’s he upped sticks and moved to Laguna Beach, where he now resides with his pro-surfer wife Alisa Schwarzstein and four children.

Cairns has paid close attention to the shark situation back in Australia over the years, where a rise in attacks in NSW and more recently Margaret River, are reported to be having a seriously detrimental effect on tourism in the area, and now, he’s worried a similar trend may begin to emerge in his new adopted home.

Newport Wedge is scary enough, without worrying about that which lurks beneath. This is Brad Domke in a crazy shore-break keg. Frame by: Dylan Palmer

“I’ve surfed in sharky areas my whole life, I actually love that feeling of going into the wilderness where it’s dangerous. I just don’t want my kids to get eaten,” he said.

In NSW and WA the governments were quick to introduce culling programmes, nets, drones and helicopters to tackle the issue. However Cairns believes the solution for California lies instead in an innovative ‘Clever Bouy’ system, created by Aussie company Smart Marine Systems, which works by scanning the river bed and alerting life guards on the beach if it detects a shark.

Accordingly, he has taken to lobbying the government to splash out on a one million dollar trial. While Newport Beach mayor and surfer Kevin Muldoon is keen to roll out the tech, he has so far been unable to convince central government to fund it. 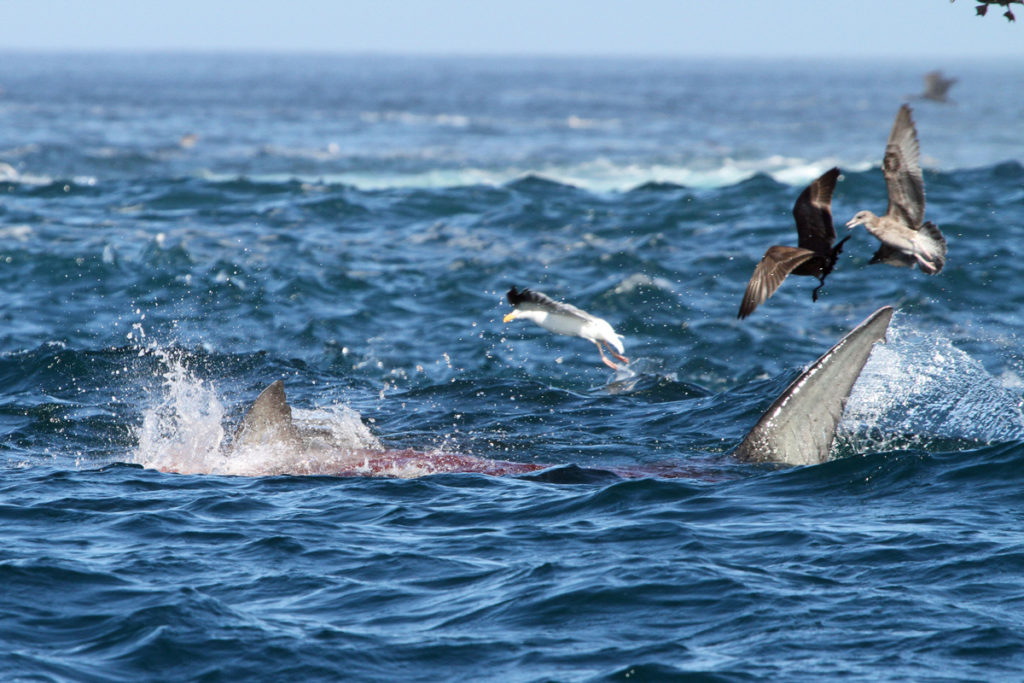 A great white devours a sea lion off the coast of  San Francisco. Photo Greg Schechter

Some experts claim the danger is not sufficient to warrant that level of funding. Chris Lowe, director of the Shark Lab at California State University in Long Beach, is one such voice advising caution on the issue. Although he concedes that the number of sharks in the area has sky rocketed, due, he says, to environmental protections and possibly, increasing sea temperatures, he points out the increased numbers have not seen a rise in fatalities. He says the areas seeing increased activity in southern Californian are in fact nurseries for juvenile sharks, drawn to the warm shallow waters near the coastline by the safety and abundance of sting rays to feed on.

He added that researches are still very much in the dark about exactly what’s happening with shark populations in the area and what’s causing the apparent changes, and would prefer money to be spent on further research, rather than preventative technology that has not yet been proven to work. 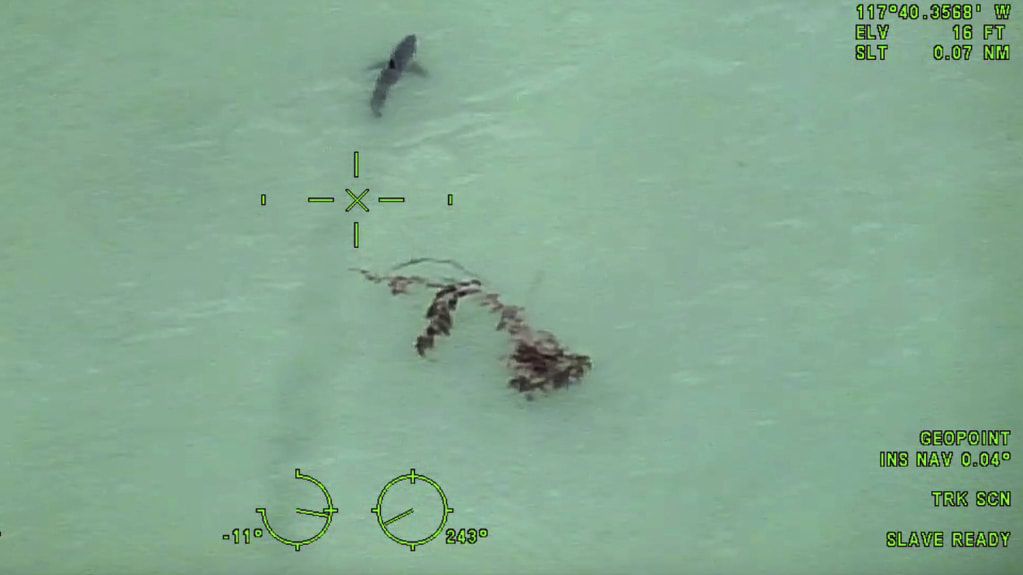 A Sheriff helicopter spots a great white off Dana Point, Orange country in May 2017 and alerts nearby surfers. Photo Orange County Sheriff’s Department

While the debate around sharks often revolve on ecological and economic concerns, campaigners say that the human lives lost and affected deeply by shark encounters should always be at the centre of the discussions.

“Even two years on, my emotions are still raw,” said Korcsmaros, who has struggled to return to her life of fitness, which serves not only as a passion, but a profession.

“There are days where I literally cry. I still have anxiety sometimes but, what I mostly have, is those emotions that go with surviving and being able to move forward and be here with my family and say, ‘Life is precious.’ “