Home » Catching Up With Kelia Moniz

Catching Up With Kelia Moniz What was one of the leading lights in women's longboarding doing hanging around Hoss during the Quik Pro? We went over to ask her....

To say Kelia Moniz is a household name in women’s longboarding is an understatement.

Although she’s only in her mid-20s, she’s been a prominent face on the world tour for over a decade, winning two ASP world titles and serving as a central figure in female longboarding’s ever-growing mainstream appreciation. Unlike many in her field, she defies the traditional/high-performance divide, excelling in both competitive divisions and in a variety of waves, looking almost as graceful at macking Chopes as on a knee-high Noosa runner. Earlier this year, Kelia became the first-ever women to grace the cover of Wavelength, with a beautiful shot snapped by the ever-discerning Morgan Maassen (you can take a look inside the issue and grab your copy here). 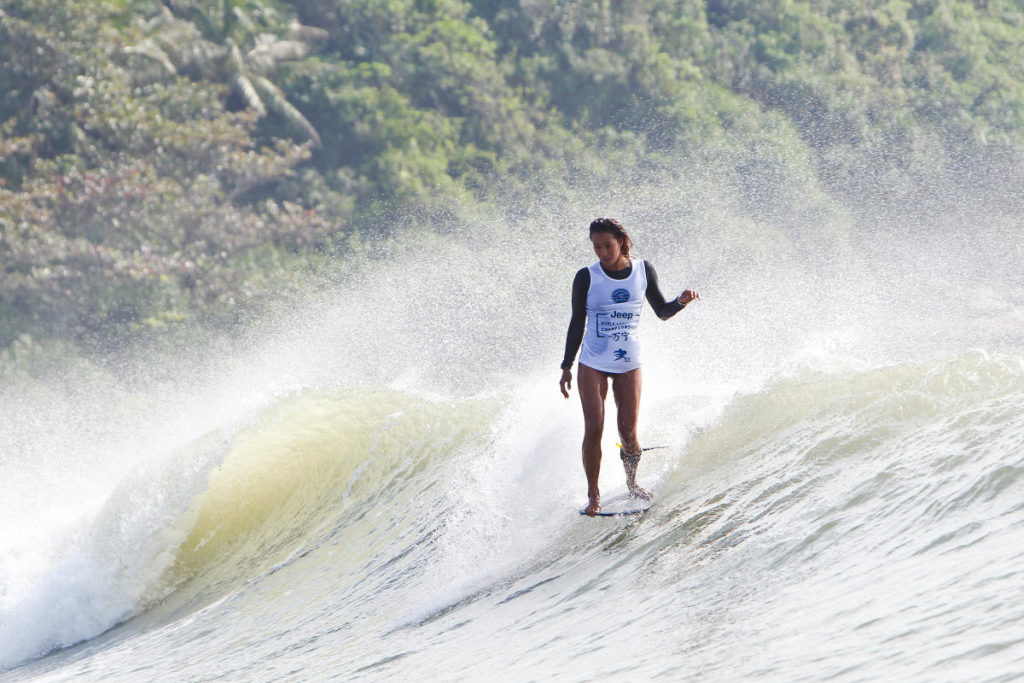 Kelia on the nose in China. Photo Hain// WSL

Despite competing on the WSL longboard events this year in Noosa, Spain and New York, as well as travelling to various tropical locales with Roxy, Kelia has been supporting her brother Seth on his Rookie year wherever she can. Last week we caught up with her on the beach in Hossegor to finally give her a copy of the mag, and find out more about what she’s been up to of late…

So you’re down here on the beach supporting Seth right now, have you had the chance to travel with him much during his qualification campaign and rookie year?

I haven’t really ever travelled with him or my other brother Josh on the QS at all, because it’s a bit too grindey. But thanks to Roxy I come to all the Quik and Roxy pro events, so at the start of the year I went to the Gold Coast with my family and then went to Bells after that and then I went to Mentawais and was able to stay in Indo for the Bali event, and obviously I’ll be at the Pipe Masters.

I saw you guys tackle the backdrop during Seth’s post-heat interview the other day, so I’m guessing you’re pretty emotionally invested in the whole thing. Do you enjoy being her watching it or is it super stressful?

It’s only stressful when we know that he can beat someone, but when you’re dealing with the ocean and it doesn’t always go your way. I get bummed more for him because I want him to be happy, but he’s had such an amazing performance this year and he’s proved his right to be on the tour. 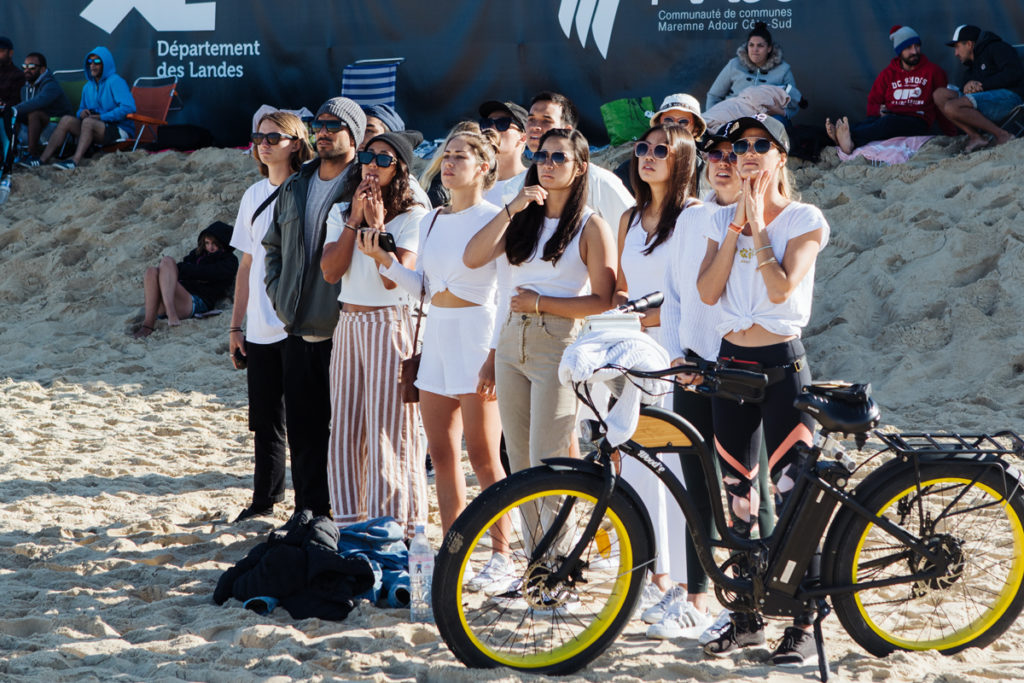 Kelia and the crew look on anxiously as Seth surfed in the Quik Pro. Photo @lugarts

You’ve done a lot of competing too and you’ve won world titles, do you give him tips and stuff?

Absolutely not! He’s in another universe in terms of competing. Just to qualify for the world tour you have to surf on the QS, and that’s not just physically draining but mentally it’s a lot of work; it’s the world’s best surfers surfing really shitty waves, and with a lot of travel. They do the really hard work, I just like to be here to support to make sure he feels like he’s got a little bit of home here when he’s away, we’ve got like 15 people who all flew from Hawaii and are staying together in a house just to support him.

What’s been your highlight of the year so far?

Honestly, being able to be part of these events on the road for him on his rookie year has been really special, because we’re not going to get this year back, and I’m just looking forward to having my other brother on tour and being able to do the same thing next year. I’ve loved watching him grow up and make the big leagues.

I’ve also been surfing a lot. I went on a boat trip to the Mentawais, and obviously went to Australia too and I was also able to spend a few weeks at home during the summer which is my favourite time to surf in Hawaii. I’m from the south shore and we have really fun waves, especially for longboarding, so I’ve actually really enjoyed having a summer at home, because it’s been years since I’ve actually been able to just sit around and wait for swell.

Can you tell us a little bit of the story behind the shot that made the cover of our last mag?

I was in Noosa for the event and I felt like I was surfing crap because I was just trying a whole bunch of different boards. Morgan was there on another job and that shot was not planned at all, he just happened to be on the beach and he just snapped that photo. He doesn’t really miss you know, so he’s always someone you want on the beach by accident. 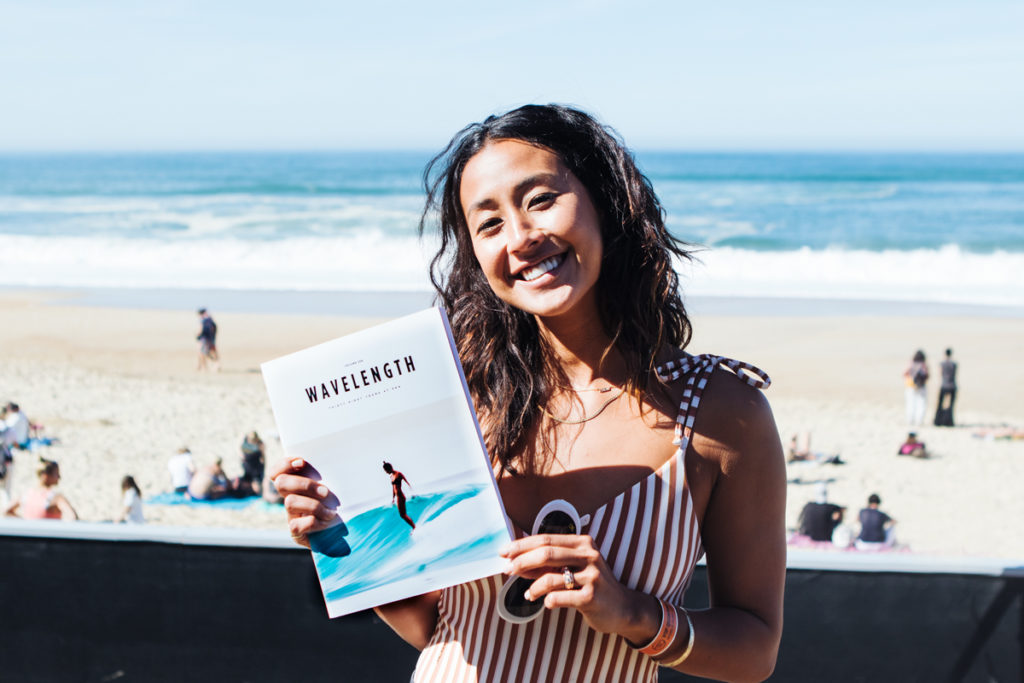 We were stoked to finally give Kelia a copy of Vol 256!

What are your plans for the rest of the year?

For me, coming to these events inspires me to find a little bit of my own lane, because all the guys here are such amazing athletes- not just surfers, but amazing athletes, they’ve set the bar for surfing as a sport so high. I think longboarding has a lot of work to do, but I think if we’re able to follow in the footsteps and not just be these laid back cool logger surfers, but actually take it seriously, we can make it like a serious professional sporting event.

I think it’s going to matter if the surfers are willing to take themselves as seriously as the shorboarders do. There’s always going to be that aspect of a really fun lifestyle that we’re not going to lose, but in terms of competition and athleticism there’s so much behind the scenes that makes them so good at what they do. There’s a lot of training, a lot of coaching, and all of that stuff is crucial to bettering your sport, bettering your surfing, raising the bar and taking the sport to a higher level. I think it’s the only way the sport of longboarding can get that mainstream appeal, and I think being around CT comps like this could really inspire some longboarders to see the hard work that goes into it.

More conversations from the world of women’s longboarding:

In Conversation With Ivy Thomas

In Conversation With Victoria Vergara