Home » Reflections On Almost A Decade Of Shaping With Lewis Clinton

Reflections On Almost A Decade Of Shaping With Lewis Clinton

Lewis Clinton shares knowledge gleaned from a fruitful competitive junior career and almost a decade of shaping in the UK...

It’s the week before Boardmasters and Lewis Clinton and I are up on the cliff above Little Fistral, looking out over a woeful one foot lineup.

A tiny grom takes off a promising micro wedge, fitting four wraps in before busting an impressive fins free. Lewis lets out a series of impressed noises.

As the kid goes to kick out, he throws a little double fist pump.

I remember Lewis telling me about how he got sponsored super young, and how the free clothes and approval from his peers went to his head a bit. ‘You turn up at school and you’ve got all the freshest shit,’ he told me ‘which you’ve been given for free and you feel like the boss! Except you’re not at all’ 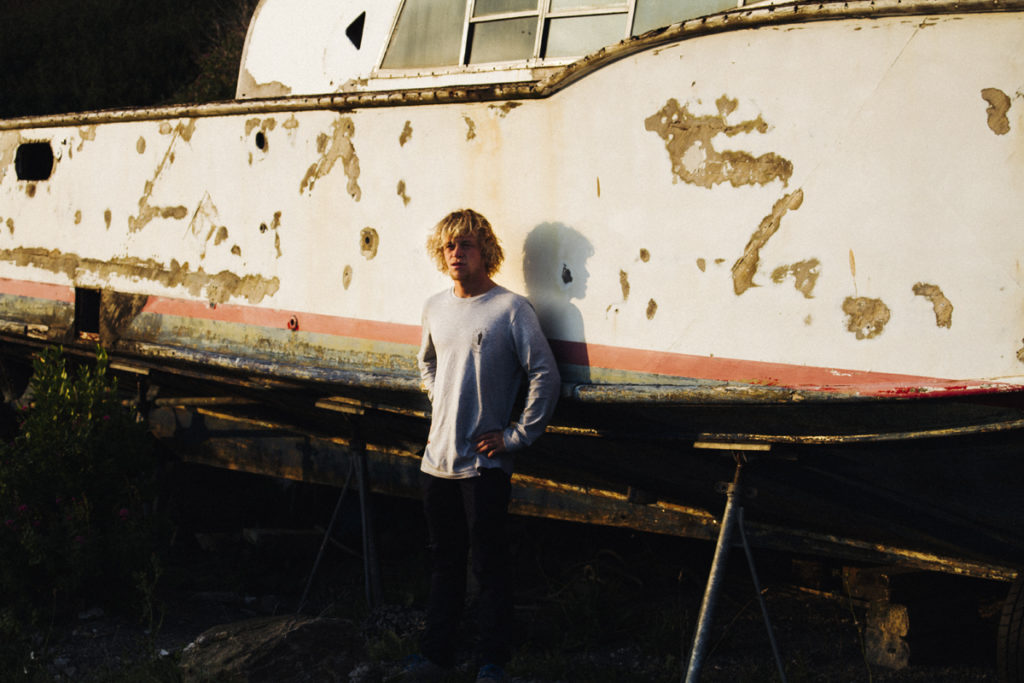 With that in mind, I ask him what his advice for this young ripper would be.

‘If you want a career in surfing you’ve got to forget about England, not get lost in the bubble of UK surfing, because if you don’t you’re not going to make it outside England, and that’s where you’ve got to be earning proper money and making a living.’

‘Do you think that’s truer now than ever before?’ I ask.

‘Yea’ replies Lewis. ‘But it’s always been true. At the time I got sponsored there was a real buzz around the UK scene which was brilliant, but you were kind of like a big fish in a tiny little pond, and it was easy to lose perspective on how good you were.’

‘You can let yourself get a bit carried away with what’s going on around you.’

‘I think you need to take part in the British surf scene, but set yours sights above it.’

‘Do you think it’s still a realistic aspiration for groms from Newquay to be international level pro surfers’ I ask.

‘For sure, you can be from anywhere and be that good,’ Lewis replies without hesitation. ‘There’s no reason why any grom shouldn’t think they can make it all the way to the top, because it’s possible.’

Last time we spoke, Lewis was shaping in his own little bay, under his own brand; LC surfboards. Now, four years on, with thousands of hours of shaping and sanding experience under his belt, he’s launching a new range with Toy Factory called Run Rabbit. While it doesn’t have a range per-say the focus is on high tech constructions, utilising a wider range of materials, to craft boards at the cutting edge of the international market. We sat down with him to talk about how his career trajectory has lead him here and ask why surfers should consider a Run Rabbit board. 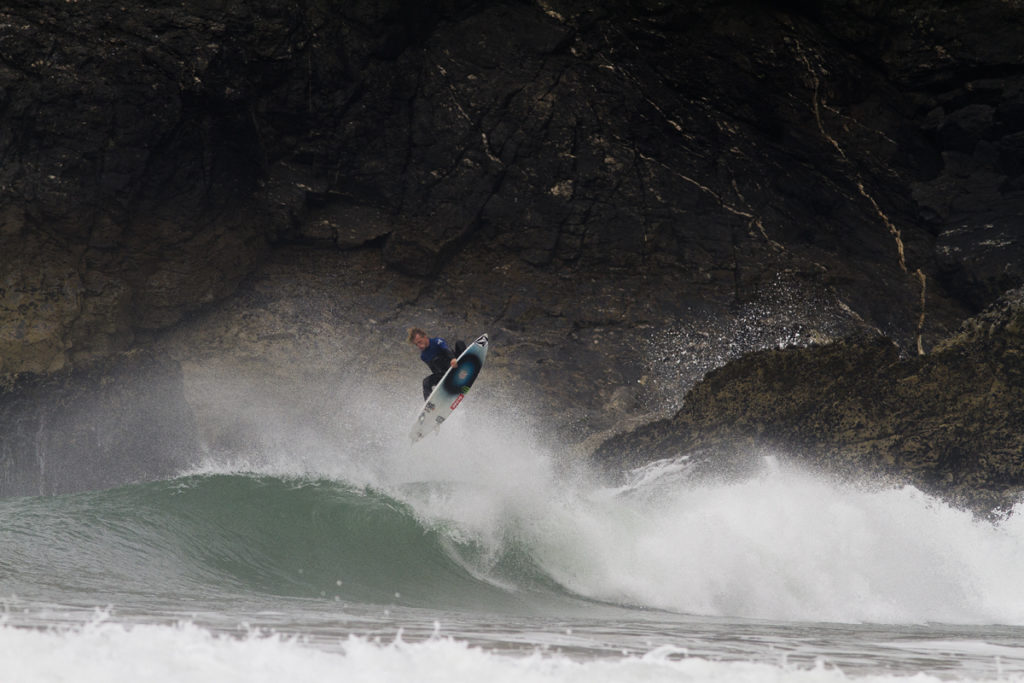 When I speak to people about the way British surfing has developed, I always include you in that contingent of guys who hit your stride just at the wrong time, as the credit crunch hit surfing, and as a result you didn’t pursue your competitive career further. Is that fair?

Well I think for me personally it’s different. Whether the industry did what it did or not, I don’t think I had the minerals to make it to the top anyway really. I didn’t have the drive to want to do it and the commitment. I like doing everything too much, rather than just surfing and once I got to a certain age, I realised that. With other people I think it’s the case that if the situation in the industry was different they would have had careers in surfing still.

Looking back, is there any bitterness or regret there?

Not at all. I like what I do and I’ve enjoyed doing other things out of the water the last few years. I did have times where I thought I’d never enjoy surfing again, which was quite weird, but now I like surfing for different reasons. You know, it’s bit of time by yourself.

Did working full time help bring the enjoyment back into it?

Yea, but not even just working you know, skating, playing football like I did when I was a kid. I just did other things I just completely put on hold when I surfed. 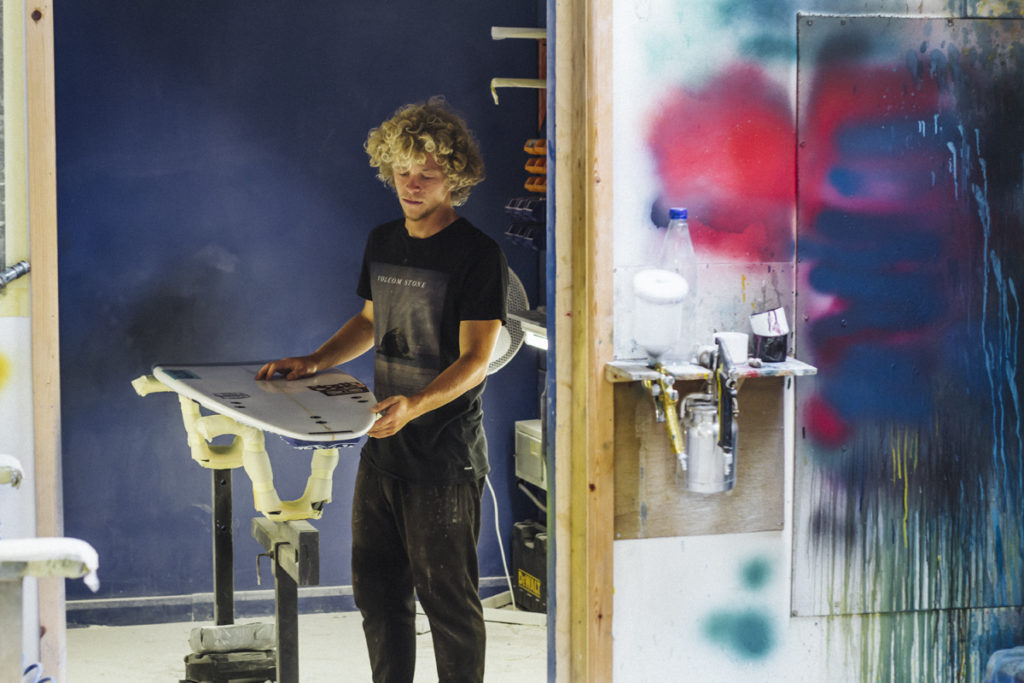 Last time we spoke you were just about to make a proper go of LC surfboards, tell me about where your shaping has gone since then?

I’ve had a turbulent few years really and while I loved doing it, trying to do everything myself with LC was a was a bit like the surfing thing; as much as I was being told stuff was going to happen in the back of my mind, because of what was going on, I wasn’t sure I had it in me.

So why have you decided to launch Run Rabbit now?

Because I love designing surfboards, and I like riding my own surfboards and now I’m hooked on that, so I think, why not make them for other people, because people seem to like them. For me it keeps my feet on the ground and allows me to maintain a heavy connection with surfing. 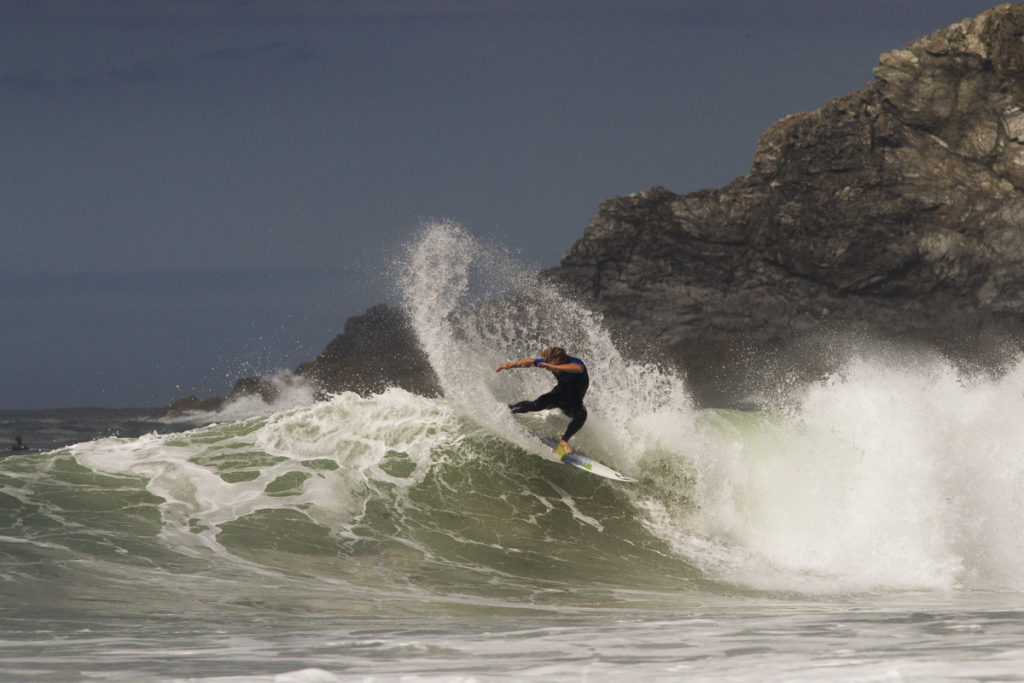 I guess you’ve been in the industry for long enough to have a realistic take on it. I guess all shapers know that they’re not going to become millionaires from it, but you’re taking the bold decision to do something you love rather than make a load of cash.

Yea, that’s true of everyone who works in the surf industry I think. Their life is dictated by the turbulent consistency of the work. But you stick with it because you like people enjoying what you’re making. That’s the beauty of surfboard building; so many people’s work and expertise have gone into making that object. 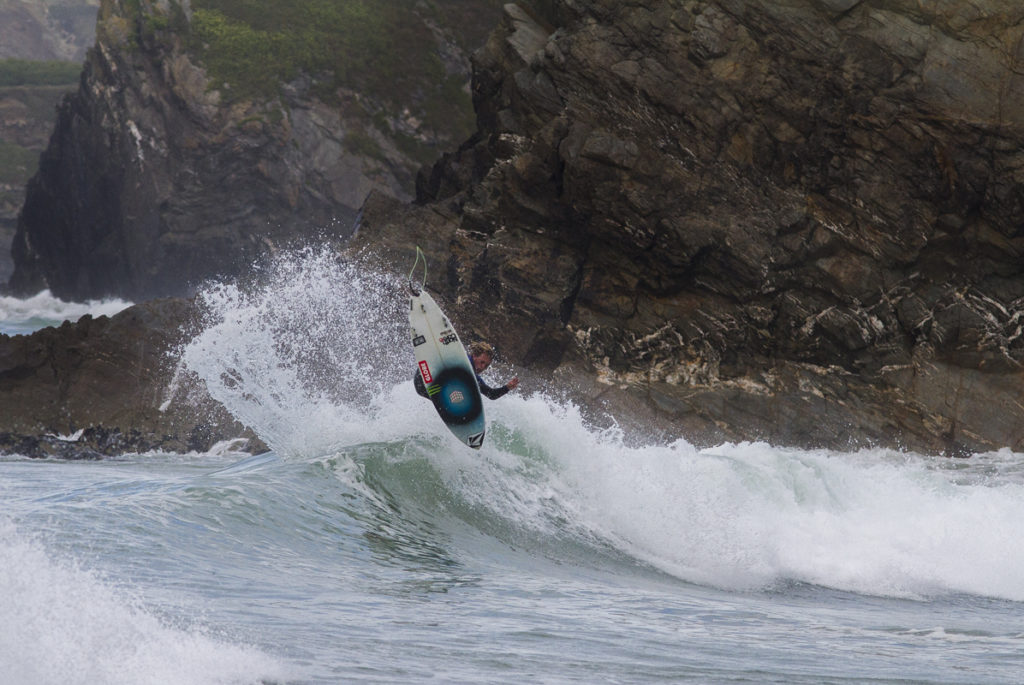 When you’re surfing one of your boards, how does the development process work?

I know what boards I like to ride, so it’s usually little adjustments on shapes that I’ve worked on for a long time- it’s tiny little tweaks here and there. But I also try, when I’m surfing them, to be conscious that not everybody is me and think about how it would feel to someone who’s a better or worse surfer than me. I can surf an intermediate board and I can still tell whether it’s a good board or not, because I know what it’s supposed to do for that person. 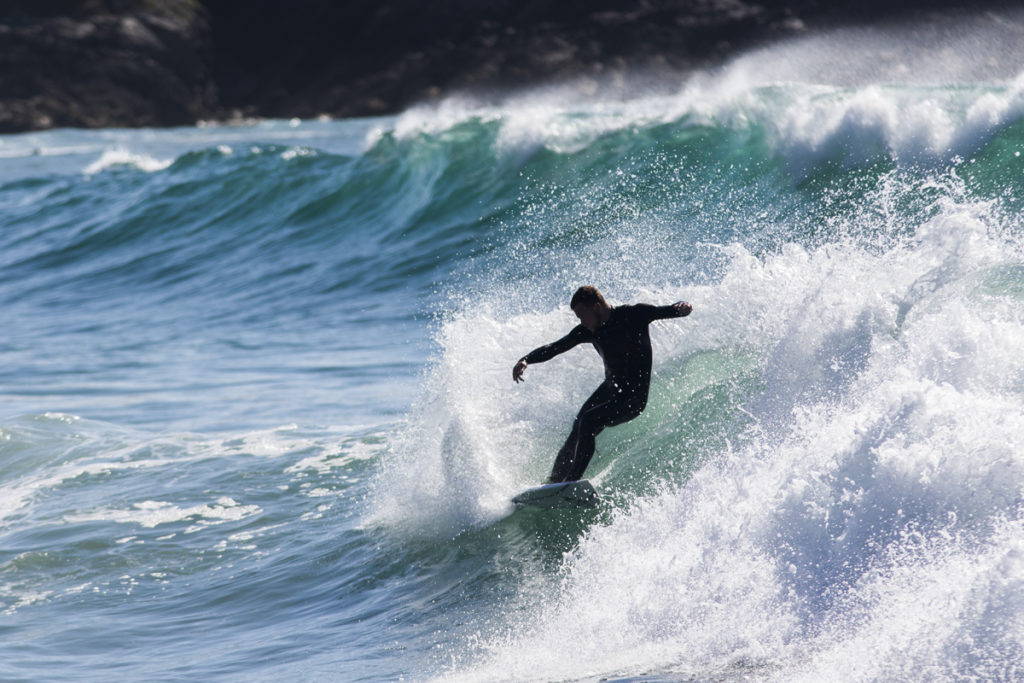 What’s the idea behind the Run Rabbit range?

I think I have a a lot of knowledge about surfboards through traveling and competing throughout my junior years, and I’ve surfed a lot of boards. So it’s just using all that experience really and putting it into crafting boards that are right for what people want and the kind of wave they’re surfing.

I was sponsored for surfboards, I had Volcom buy me surfboards and I’ve bought loads for myself. It’s probably worth noting that my favourite boards I’ve ever had have been English boards. I’ve had everything you can think of, a couple of everything, and I’ve had boards that I’ve liked but the boards I’ve stuck with for a long time are two English boards. I still think of them to this day (laughs).

It’s interesting how the times changing affects how you feel about boards too. Like something that felt amazing then, I could pick up now and could look and feel completely different, just because of the way surfing’s developed and how you develop as well. 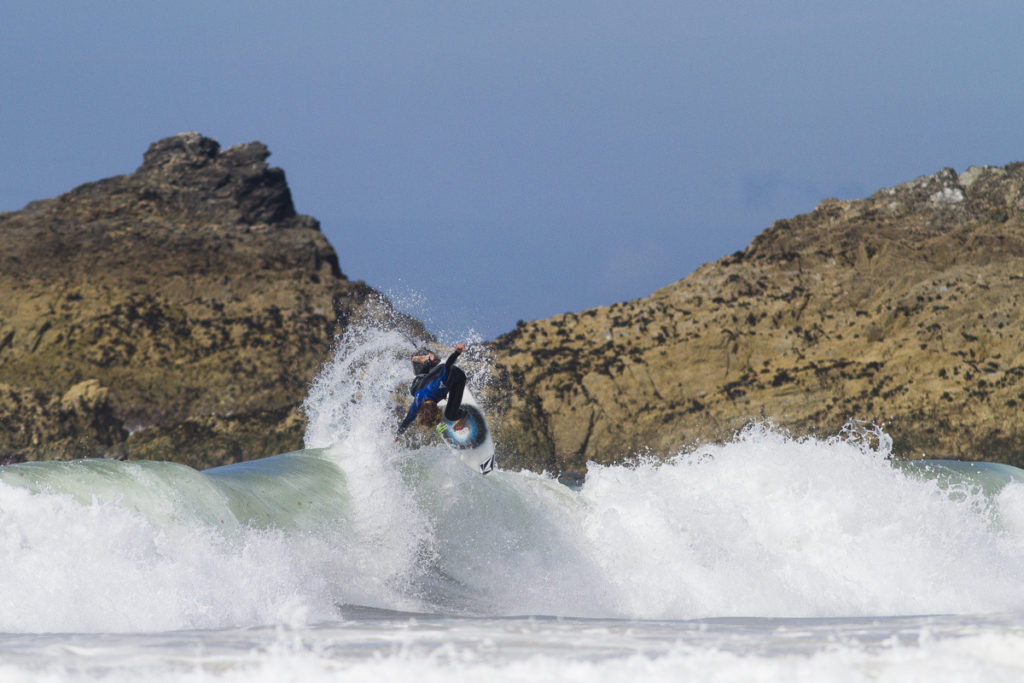 Do you think shapes are super subject to trend?

To be honest the fact that surfboards are constantly changing is due to trends and fashions, but it’s also just access to a whole different world of materials that we’ve never had before. The last major thing to happen in surfboard design was the thruster, and now with all this new technology and materials its really exciting and everyone’s just going mad on it and I applaud that, because we could find something really amazing.

So are you going to experiment with all kinds of different constructions?

Yea, right now I’m riding an epoxy core with parabolic stringers, which are high density stringers made of foam and it feels good.

That’s the beauty of working at the Toy Factory, I have access to anything I want in terms of materials, and that’s kind of amazing because it’s so hard to get hold of stuff if you’re working for yourself, you’ve got to buy everything in bulk, so it’s brilliant having all of those materials just there to use, and get stuck in with. 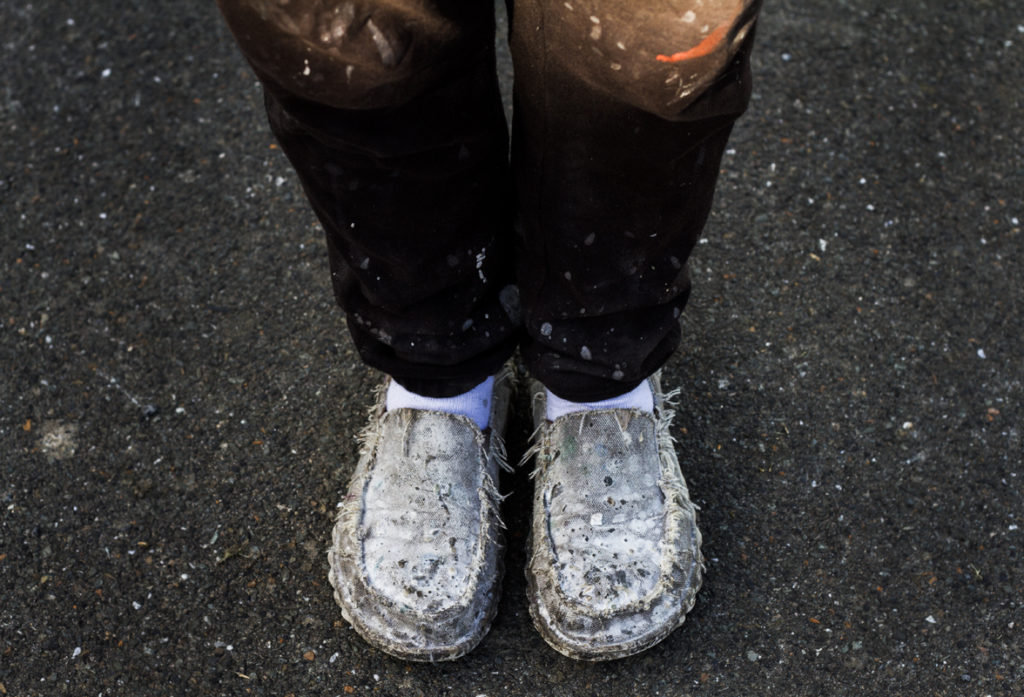 And so where are you heading with your surfing next?

Well I’m stoked to still be on the Volcom team, I’ve been with them for about 13 years now and I really feel like I’m part of the family. I’d love to do some trips with Run Rabbit in the future, maybe get a little team together. To be honest right now I’m just enjoying going surfing you know, I can have the worst shocker after not surfing for a while, but sometimes I just have surfs where I get out and I’m like fucking yes, I want to do a comp! Sometimes I get so amped up and I love that, because that’s what always made me feel good and It’s continuing to do that, just in a new way.

Fancy winning yourself a custom Run Rabbit board, shaped by the man himself? Click here!