The London Girls Surf Club make the most of a short stay in North Devon, with a little help from Jackson Customs.

The contrasting stereotypes of the overworked, overspending, land-locked city dweller and the beach-based, free-willed surfer type have long been discussed, compared and contrasted.

Whether you consider yourself the former or the latter, there does, of course, exist a happy medium between the two. It’s more than feasible to balance a love of the ocean with a life in the city, especially if you don’t mind a bit of a helping hand to get you started.

That’s where the London Girls Surf Club comes in. Founded by Kylie Griffiths in early 2017, the club set out to open the sometimes intimidating doors of surfing to landlocked city ladies, encouraging women of all ages and from all backgrounds to get out of the concrete jungle and into the ocean. This particular trip brought a small group of ladies down to one of the South West’s most accessible spots, North Devon’s surfing hotspot, Croyde Bay. 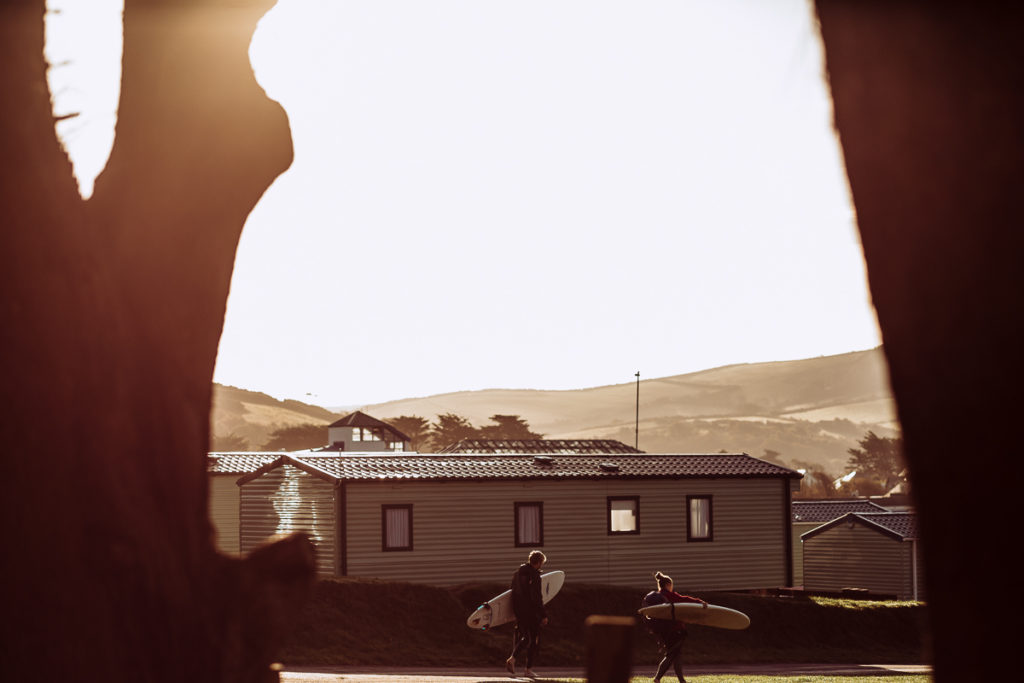 Arriving at Ruda Holiday Park, a large beachfront campsite just a few minutes walk from the main beach, we were greeted with Parkdeans’ self-proclaimed “glamping” setup, a term often used to describe anything slightly more upmarket than a £20 Tesco’s tent, but the folks at Ruda didn’t disappoint. These safari styled, canvas based palaces boast a fully functional kitchen, toilet, living space with TV plus enough space to comfortably sleep six adults. Add to this an outdoor decking and bbq area and you’ve got yourself a sweet little surf focused setup. Despite a long minibus drive from London, everyone was keen to ditch bags and belongings in their new beachside homes and head straight down to the beach for a quick evening session. With most of the girls being beginners, the LGSC had enlisted the expert help of Croyde Surf Academy’s Carlo to guide the newbies through their first saltwater experiences. With wetsuits drying, limbs exhausted and surf thirsts fully quenched, it was time to make use of those luxury tents and get a full night of shut-eye before embarking on the second day’s wave hunt.

Although escaping the London hustle and bustle may do away with the hecticness of a capital city, this little corner of Devon is not completely removed from the pressure of occasional overpopulation. With staycations and family trips to the West Country on the rise, the fragile and sometimes antique nature of the South West infrastructure can become somewhat stressed under the pressure of a few thousand Range Rovers and shiny new motorhomes. Anyone who’s had the unenviable task of navigating a Cornish or Devonshire A road in peak season will feel the pain. A journey that can take mere minutes in March can feel like hours as soon as the kids are out of school. Bearing in mind our short trip is taking place on the North Devon coast in the throws of late Summer, we were at the mercy of not only tide but traffic, a dangerous combination when you’ve only got a handful of days to get as much quality surf as possible. However. The clever folk at the LGSC had foreseen this potential surf spoiler and hooked up with the chaps at Jackson Customs. These guys have been importing small engined Honda bikes from Japan for the last couple of years with one intention; giving urban and rural boardriders the perfect traffic beating, board carrying alternative to sitting in traffic or lugging your board to the beach or park. 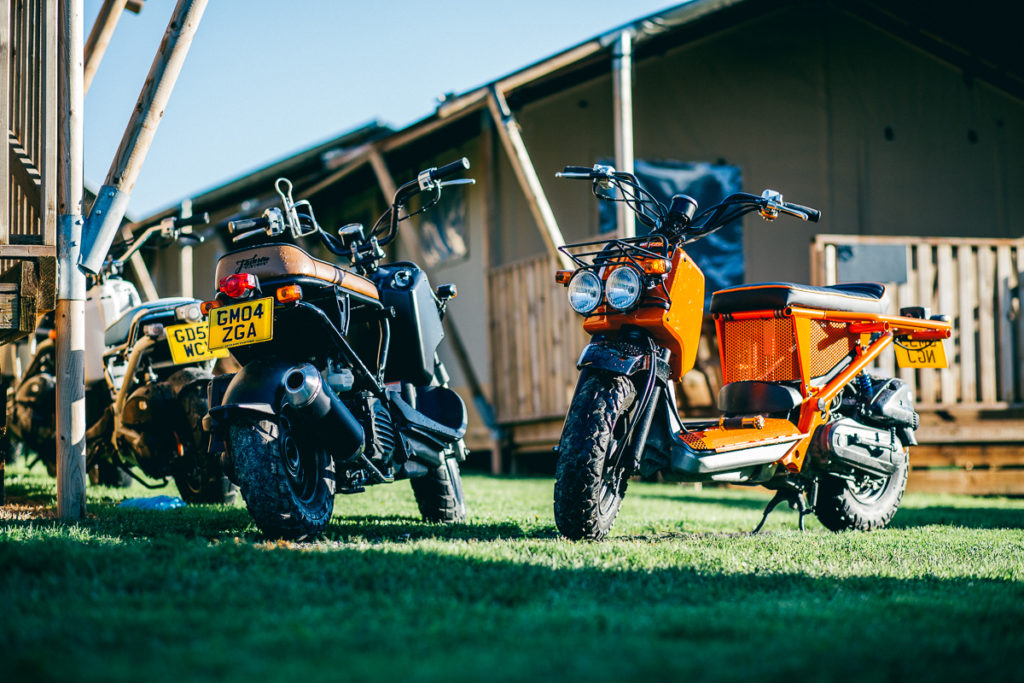 There was enough of these 50cc weapons to get everyone on two wheels and up and down the North Devon coastline for the next few days. Although the custom exhausts weren’t always to our canvas neighbours likings, the bikes were sure to turn heads and invite questions wherever they were parked up. The easily detachable board racks are secure enough to hold onto your shortboards and compact enough to be thrown in a backpack when they’re not needed. The following morning saw an early start. Standard routines were followed, coffee flows, pastries are eaten and excited surf chat drowns out the throaty exhaust notes of our two-wheeled transport. Bikes are loaded with boards and plans are afoot to buzz down to Braunton, where we can expect to avoid the winds that are currently whisking across the shore of Croyde. The surf was small, but plenty fun enough for the beginners amongst us. Whitewater powered our smiling first timers all the way to the beach while the sets gave the more experienced riders a few clean ones to play with. With the wind set to increase and daylight already fading, we were soon heading back to our Croyde basecamp, albeit with a few short Instagram focussed detours along some of the North Coast’s more scenic routes. The next few days were spent on repeat, using the ladies limited time on the coast to get stuck into as much surfing as possible, a routine that was wholeheartedly embraced by everyone involved. Remembering that The London Girl’s Surf Club’s goal is to expose these women to an alternative to tube stations and congestion charges, it also serves as a reminder to those of us that take this lifestyle for granted, just how much our environment can offer those that are new to it. Seeing this small group of girls embrace something so foreign to them was a real reminder of whats’s also so important in surfing; enjoying yourself.

This adventure was made possible by Brixton, Skull Candy, Jackson Customs and The London Girls Surf Club. Big thanks to everyone involved.