We've always got time to watch Clay Marzo slide into a few kegs down Mexico way.

Infamous for his disdain of neoprene, Clay Marzo was in a predicament. “Brah, I can trunk it,” he said to the collected crew as we stared at 6-8’ offshore wind groomed tubes on what would become the day of the year at an undisclosed Baja California beachbreak.

“Clay, it’s northern Baja in mid November and the water is like 59-degrees…you’re tripping!” was the reply as we zipped up our 4/3mm fullsuits with a hot, dry wind whipping up sand and debris.

He gave in and began pulling on and squirming into a new wetsuit his brother Cheyne Magnusson got for him. Clay Marzo was in a fullsuit for the first time…ever? Who knows.

“Brah, I can’t paddle. So sluggish.” For not being able to paddle, he sure did well in the epic conditions. After bagging some incredible tubes and doing his signature drop knee backside barrel thing aboard a 6’3” Superbrand ‘Mad Cat’, it was taco time.

If you know Clay, you know that nothing excites him more than food, so when we got to the go-to taco joint—Tacos Manuel in Rosarito Beach—he was rubbing his hands together excitedly in anticipation of straight-off-the spit al pastor tacos. “Brah…” was about all he could mumble between bites of “the best tacos ever.”

Belly’s full and wetsuits bone dry thanks to the 90-degree air temp and Santa Ana wind, we head back to the spot only to see Rusty Long exiting the water with a broken 6’6” and bloody hand. “Getting heavy out there,” he told the crew. When a guy of Rusty’s caliber says that, you take his word on it and consider your options. 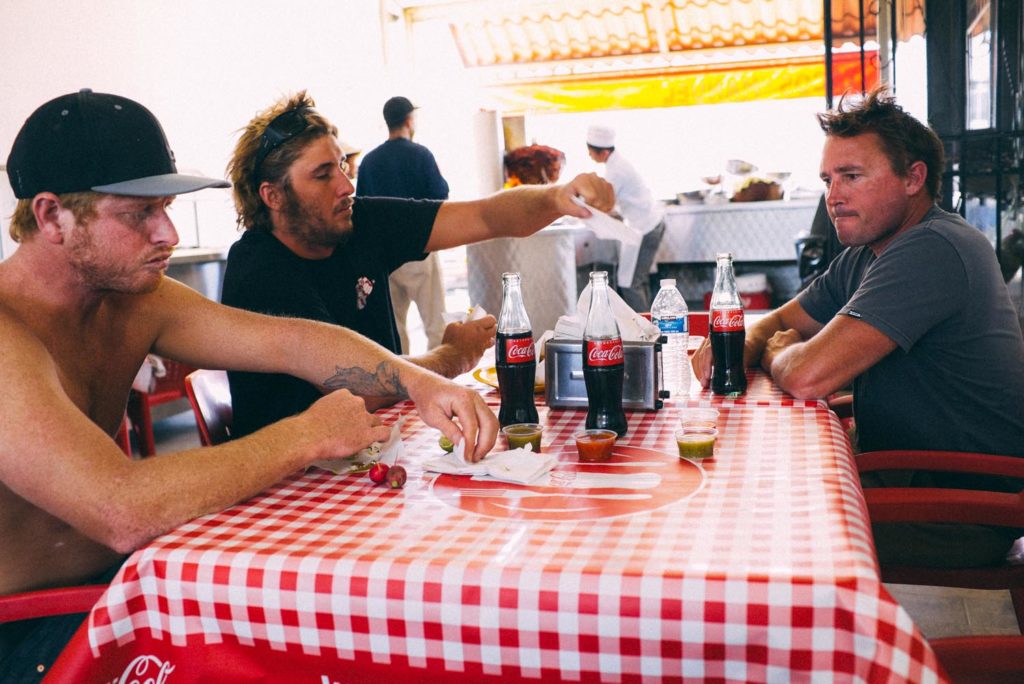 Driving away from the increasing swell was a roll of the dice, but one that ultimately paid off as just around the corner another beach break was holding the swell even better—not as big—but more hollow and with better shape.

Clay bounded out of the truck, ran to the waters edge, declared his intent to don boardies and boardies only, quickly changed, and ran up the beach untethered from that pesky neoprene.

And that’s when the magic happened. With just him and his brother at an empty, firing beachbreak the Clay show began. Showing no signs of hypothermia, Clay was alive and electric, paddling this way and that, and taming a lineup that looked like Hossegor on steroids.

After an hour and a half and the sun already behind offshore islands, Clay came in, admitted to being frozen to the core, and cracked an ice cold Tecate. “Brah, I told you I could trunk it!”