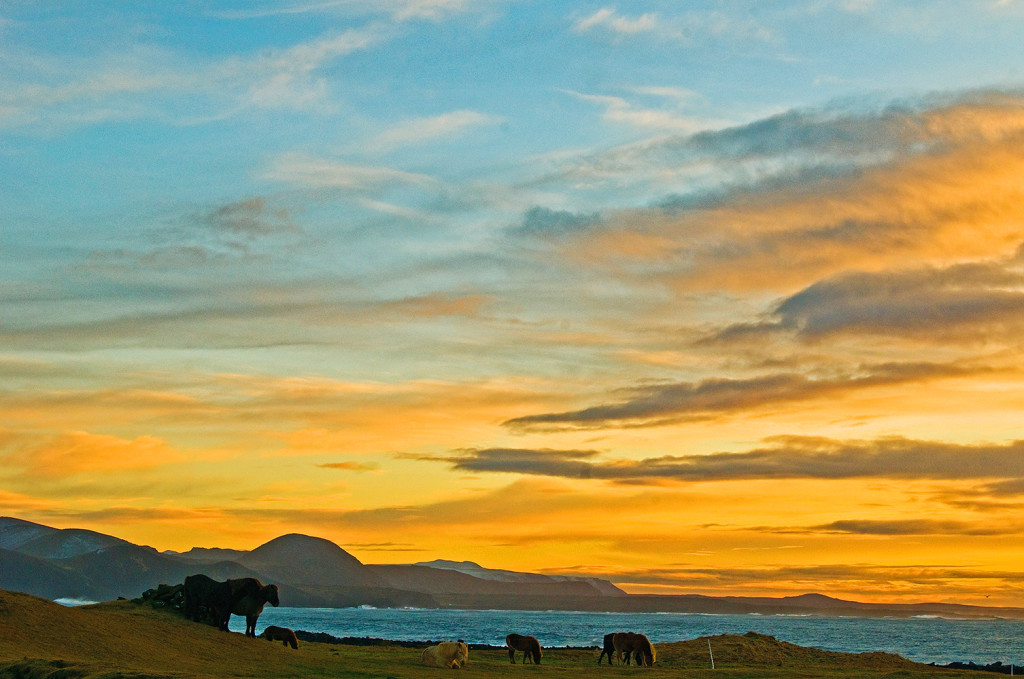 When not in the surf, the general scenery is enough to blow you away. Icelandic horses at sunrise.

Three coffees, a cheese and ham role, pastry and a local variation on the donut. It’s minus ten outside, the wind is biting, I’ve slept in a car all night and the only thing that is going to jump start my morning is a lot of coffee and a serious amount of carbs. But the surf is pumping. Opposite me is Ian Battrick, long time cold water traveling companion and without doubt one of the hardest core guys when it comes to cold water surf missions. The view from the window looks out across what looks like waste land, it isn’t, it’s a volcanic plain. In the distance the land rises and it doesn’t take long before you hit the snow line. The wind is howling from that snow, I’m in layers of clothes, and need to be, even with a car with a heater and heated seats as soon as you step outside you will get chilled to the bone. It is beautiful though, the air clear, virtually moisture less from the north. The swell is solid, pulsing out of the North Atlantic, it’s hard to tell how big, double, triple maybe more overhead, whatever it’s a long paddle out, but Ian’s keen. Egil one of the local boys is sat in his van watching, I stand with him as Ian gets into his suit in record time. The wetsuit tech is more than enough to handle this cold, in fact Ian is in a 4mm hooded suit he designed himself. But the getting in and out is where you get really cold. Ian negotiates the paddle fairly easily, considering it’s way bigger than we thought, as it always is. The lineup is confusing, a long period double to triple overhead swell is unloading on three or four different ledges, shifting with almost every wave. Ian is dodging sets in a strengthening offshore breeze, which is due to pick up to gale force. He’s out there because there are barrels to be had and, apart from a couple of locals, who today are watching, there is not a soul in sight. This is not perfect surf, but there are good waves out there and despite the bitter cold it’s totally doable. 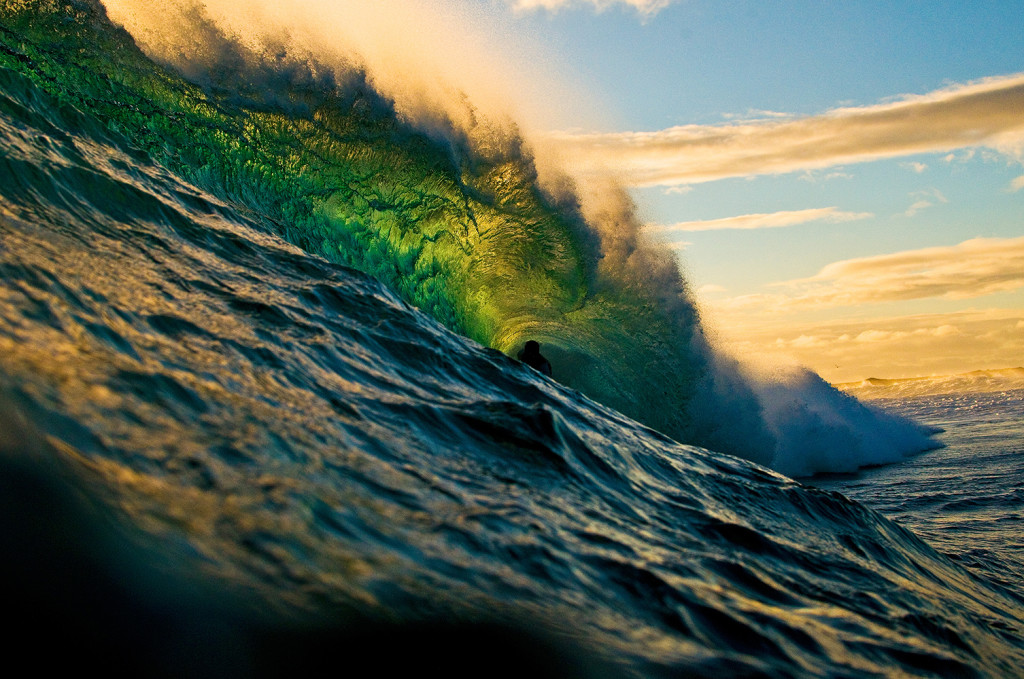 In the water though and once you’re over the chop and continuous breeze, a barrel is a barrel. Ian Battrick locked into one on this ledge.

The next day things have calmed down, Ian is joined by locals Robert and Egil. The boulders in front of the wave are frozen, slippery ankle breakers. The air is well below freezing but at least the howling gale that reduced the temperature to well in the minus teens has abated for now. The water here, although brushed by the Gulf Stream, is still chilly.   Wetsuit technology is so good though that once in I’m infinitely warmer than I was standing in the field next to the car watching.   The waves up here are not perfect, rarely anywhere in the extreme latitudes of our planet do you find really perfect waves, the proximity to swell producing weather systems just doesn’t make for the long range ground swells that make for perfect surf. Local wind and weather also doesn’t help, you soon realise that a strong local breeze can be as destructive for a swell as the quality of the swell itself even if that breeze is way offshore. Today though is good, the reef here is raw, but not perfect. Little runners unload all over the place, but when one does hit the ledge in the right place it runs off in a barrel which is more than worth the wait. The local boys surf it well, despite being in 6mm of rubber, all be it the most flexible you can buy. Robert especially has this place absolutely dialled, picking off the best of the set waves and yanking on the breaks for some little back lit barrels, which, if you took the wetsuit out of the shot could be mistaken for a tropical reef. 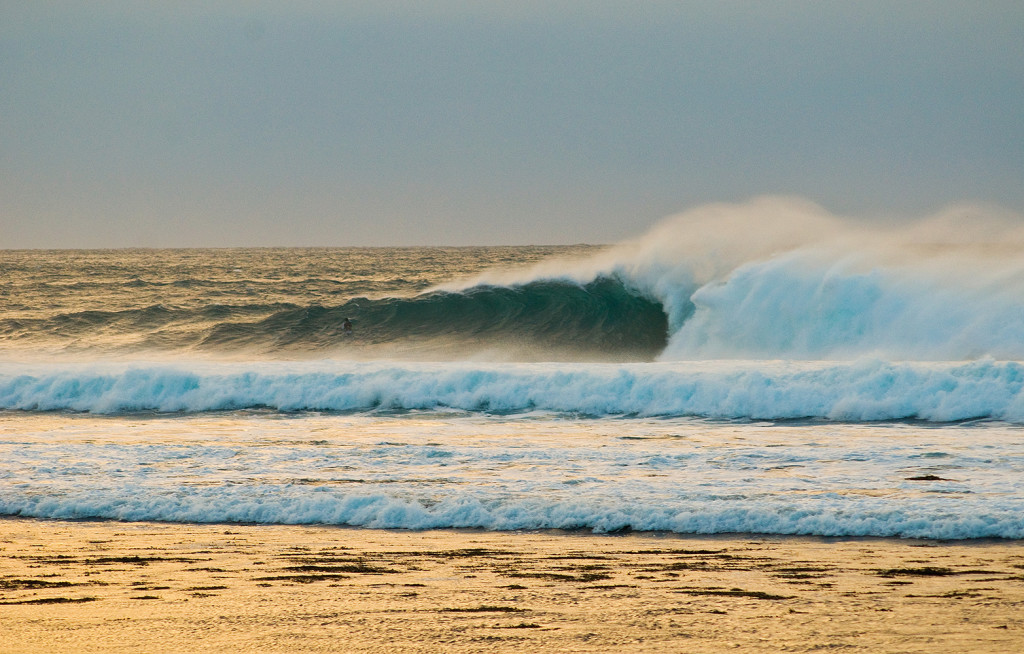 Swells are so fleeting in Iceland, and so often accompanied by really strong winds, that even when conditions are like this you just have to get in and make the most of it. This day was cold last autumn, the wind chill way below freezing. 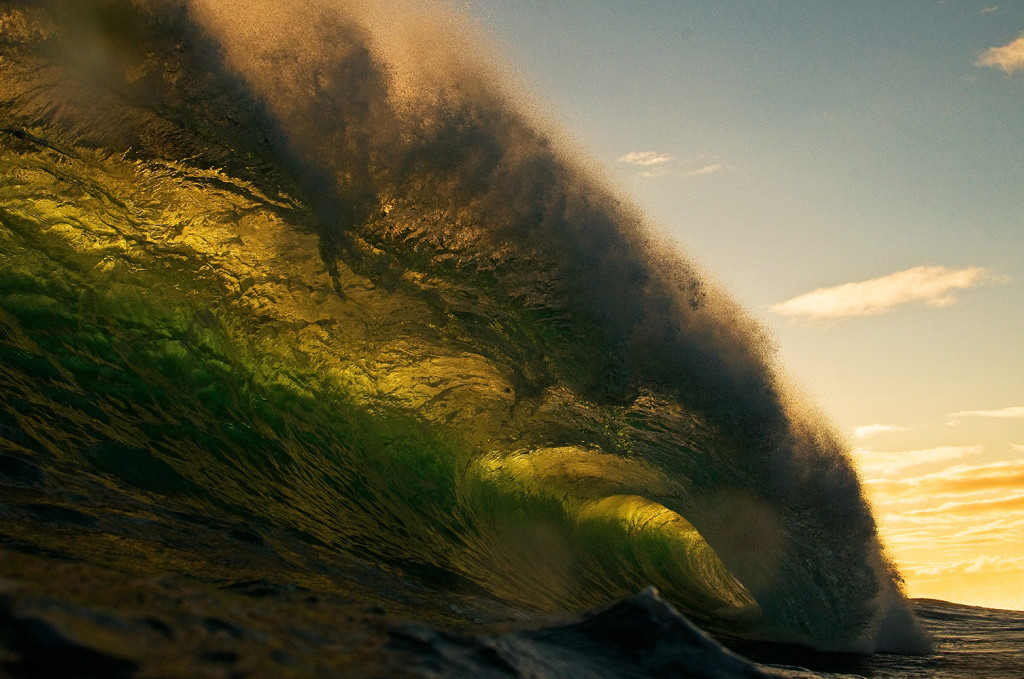 One gem slips through, wind ravaged to the point it has teeth. 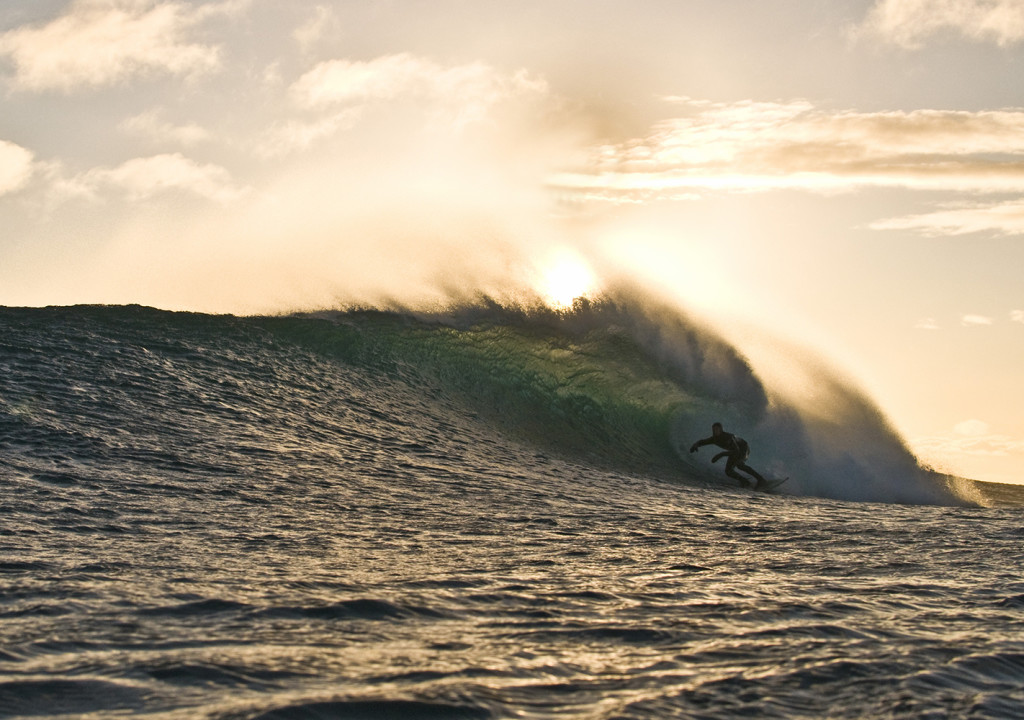 In the field overlooking the wave and the reality of the situation is back. Relative warmth in the water is taken away in a strengthening and biting breeze. One other thing about these parts, when the waves are good, you get in, it’s the first rule of surfing at the extreme ends of the planet whether that be Patagonia or Scotland, take every chance, it will deteriorate. In the field though hyperthermia is a risk, but the local boys have it dialled, with an almost infinite supply of geothermal hot water they carry gerry cans of the stuff to the beach with them. So a post surf shower in piping hot water makes getting out of a wetsuit a lot easier. It’s this sort of ingenuity which has gone on undercover for years which makes living and surfing in the cold, and I mean proper cold, not the odd cold snap in Cornwall, liveable. The free hot water in Iceland, the fact that for years on the north coast of Scotland the boys up there had incredible all in one insulated boiler suits to keep them warm instead of expensive outdoor gear, or in Norway locals befriended the nearest house with a hot tub so they could jump in after a session. 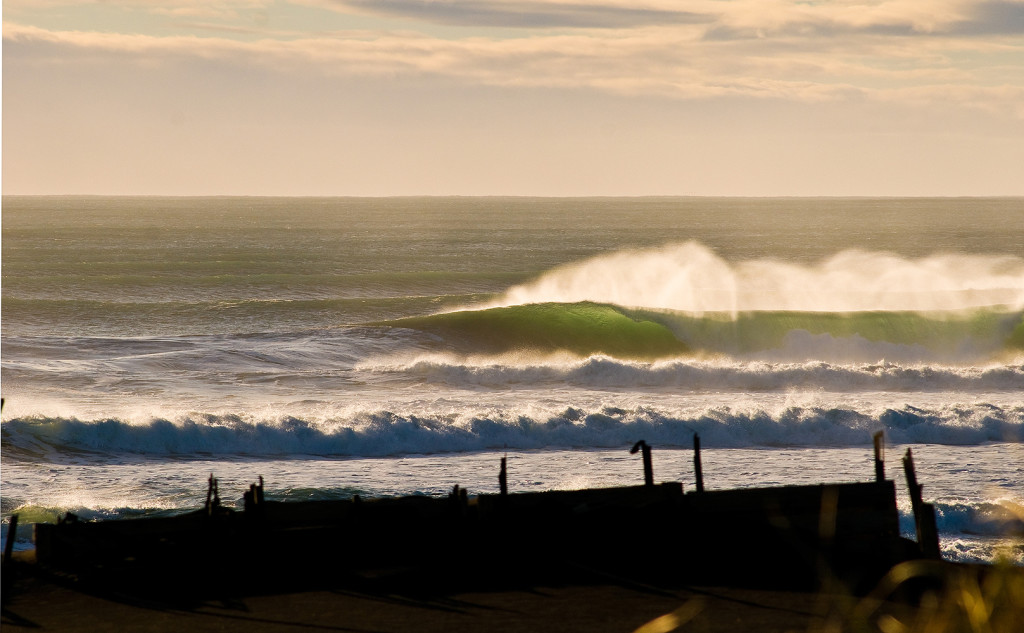 Stacked up and empty, but shifty with an extremely long paddle out in absolutely frigid conditions, looks good though.

It all adds up and it doesn’t stop there, growing up in Norfolk, which gets cold, we used to get out of the surf 30 minutes before the end of the session, turn the car on, then get back in to surf, so at least we would have a piping hot car when we got back, although I concede now that on a global warming front this wasn’t great. The best post cold water surf set up ever was at my mate Tom’s house in Scarborough. I’ve been going up to Yorkshire from Norfolk for almost 25 years now and when Tom moved back up there after years in the Valleys he bought a lovely town house, situated almost half way between North and South bay, and it just so happened to have a sauna in the backyard. It made surfing hideously blown out, freezing cold south bay so much easier, although I seem to remember Tom always keeping to Scandinavian tradition and always getting naked in the thing, which wasn’t that big. My point is though, that despite the apparent boom in cold water surfing, surfers have been dealing with the cold in their own way for years, it’s like anything, if you love doing something so much you figure out a way of doing it in the most comfortable way possible, whether that is lighting a fire on the beach in Canada to keep warm or going all the way and designing the ultimate cold water wetsuit like Ian Battrick has done. 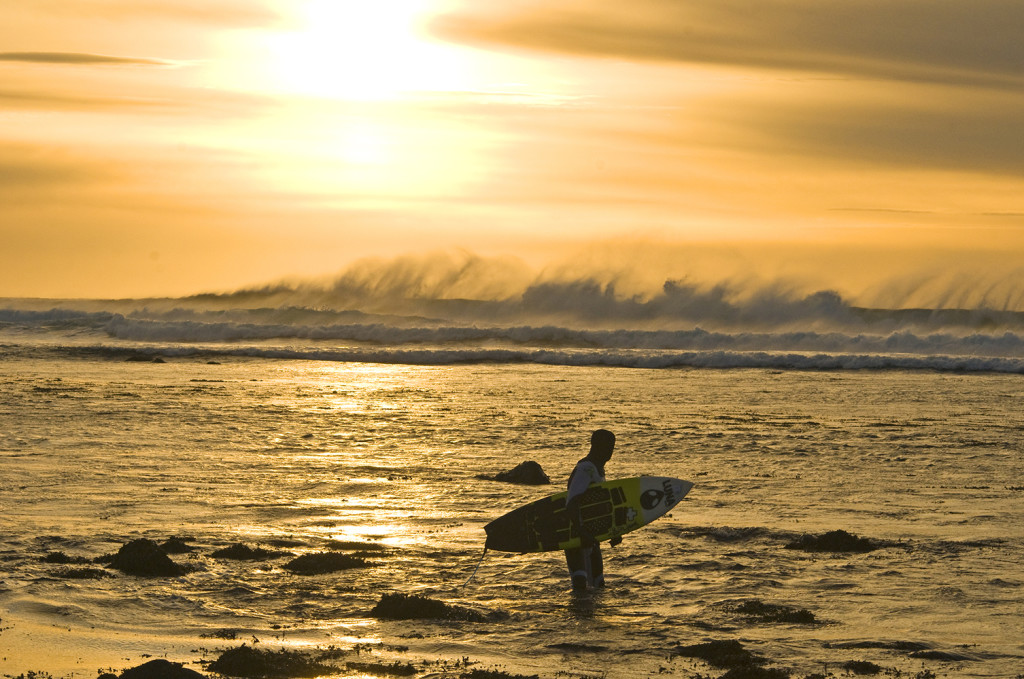 Looks like sunset, but it’s actually around mid day, the sun just never gets that high in these parts in winter.

Back in the small Skoda we’re driving through heavy snow, the road is getting more and more treturous. As we get to the coast the snow turns to a slushy rain and swell appears out of the misty precipitation. This is the other side of surfing in the extreme latitudes, cold and clear is easy to deal with, but what about the days, weeks, of cold and rain, onshores and cross shores. These are the default conditions of these areas, not the pretty image you see here when the weather cooperates for a few hours. Gales and rain and general turmoil, it’s why sleeping rough finding what shelter you can beats a tent any day, they just don’t survive too well in freezing ground, gales and consistent rain. You could of course get a hotel room or a cabin, but that brings in the other thing about these regions, whether it is Scandinavia, Japan, Russia, Scotland or even England it’s bloody expensive, so if you want to spend extended times in these areas, which is what is required to get anything verging on good surf, you got to live as frugally as possible. Therefor living out of a car and being mobile is essential. 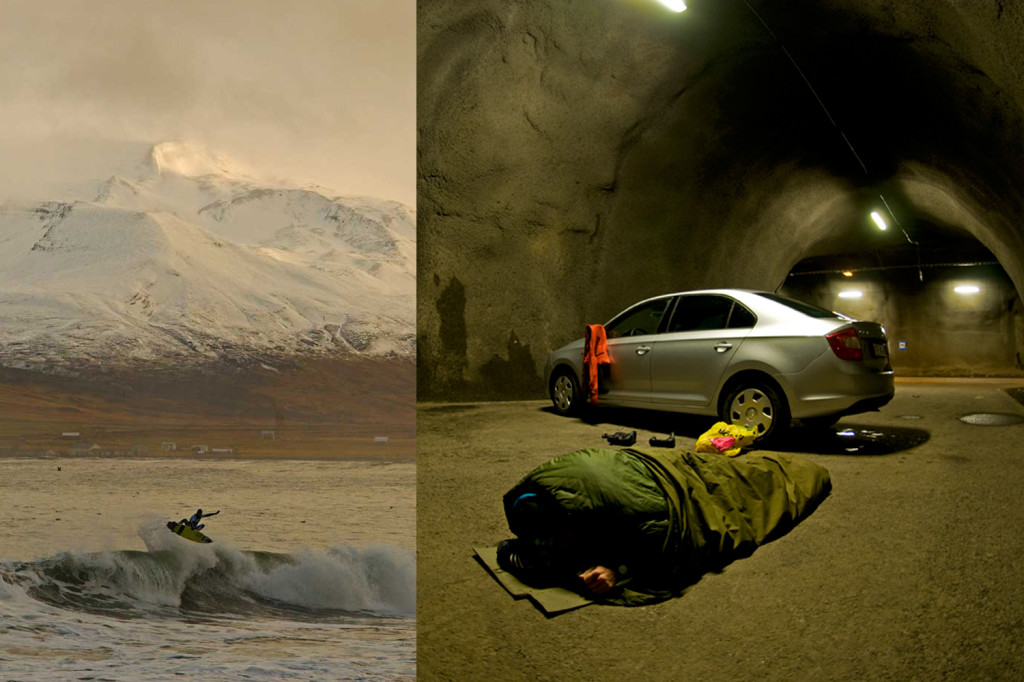 We were there to shoot a 4mm wetsuit from Lunasurf, prove it’s warmth and flexibility, this shot proves it in 4 degree water. We had zero budget, so slept where we could, this tunnel was particularly nice and out of the weather. 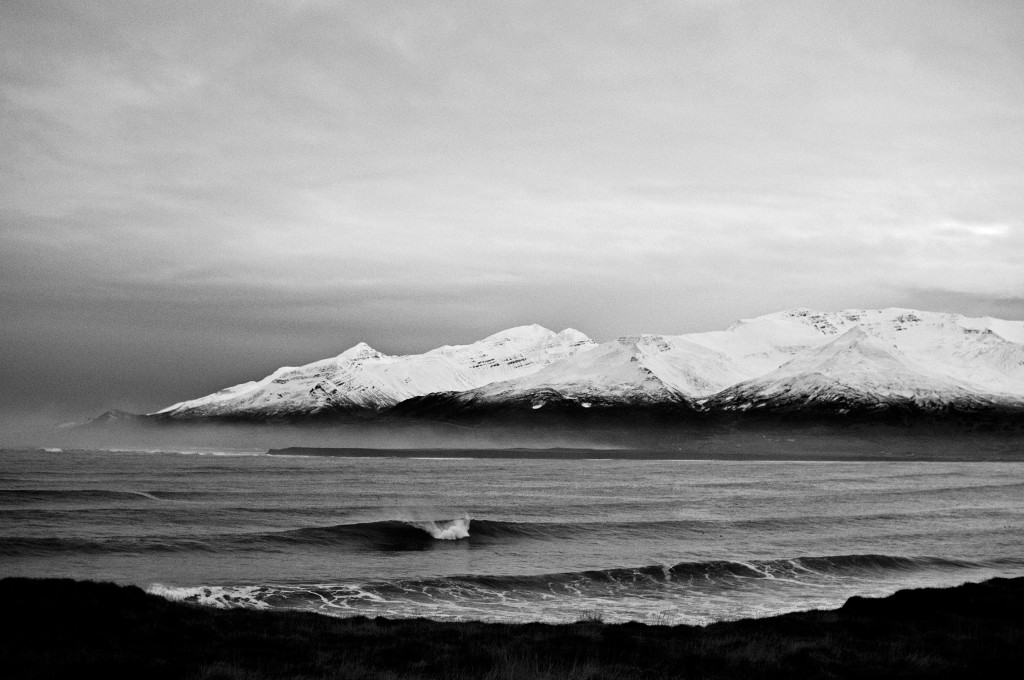 A lonely peak with no one around. Sadly not as good as it looks and just a little bit shifty, Ian found a few though. 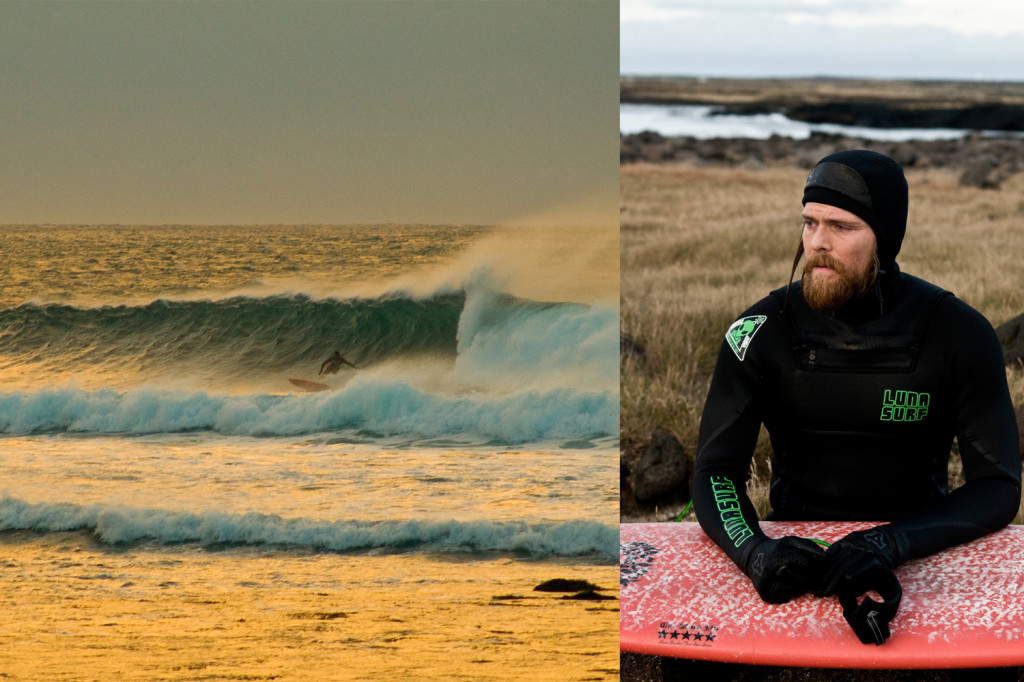 Norwegian surfer Torger Svindland joined us for part of the mission as well, well used to the cold coming from the North Sea town of Stavnager.

It’s the way you need to be up here to deal with the changing conditions, having a fixed abode doesn’t really work. It’s like everything around being a surfer from colder latitudes, to get the most out of it you got to be flexible, on the conditions and well prepared. But we all know that, we live with it every day, if ever there was a nation of cold water surfers, it was us lot already, I doubt there are a more wetsuit savvy group of surfers on the planet than us lot from the UK. 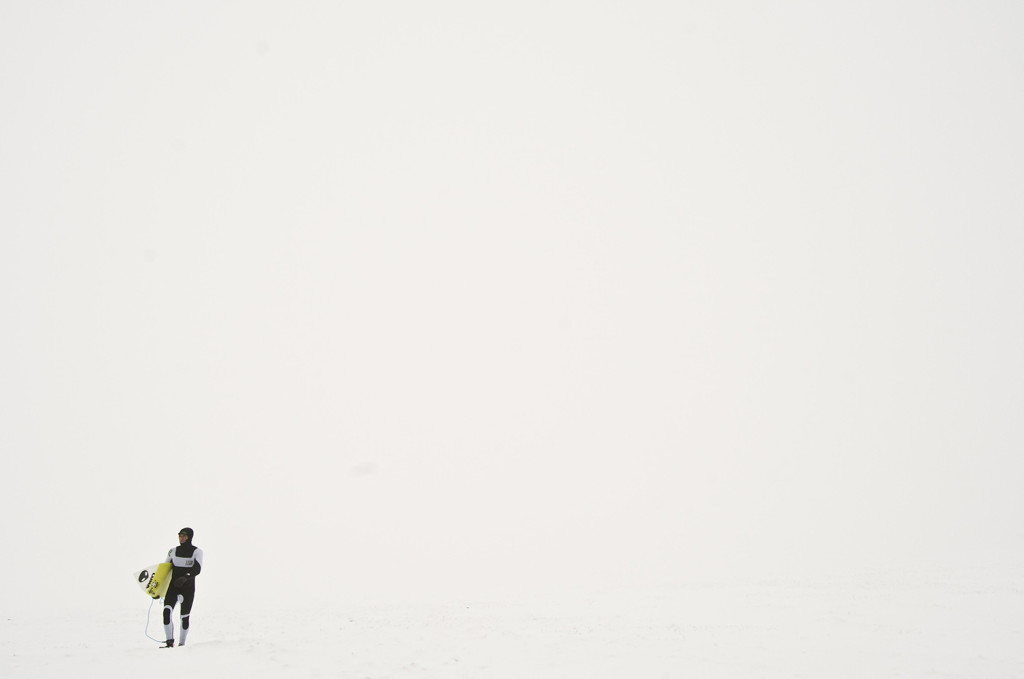 Conditions change fast in Iceland, what is a whiteout one minute, is clear and perfect a few hours later,
so walking off into a blizzard to surf isn’t as silly as it may seem. 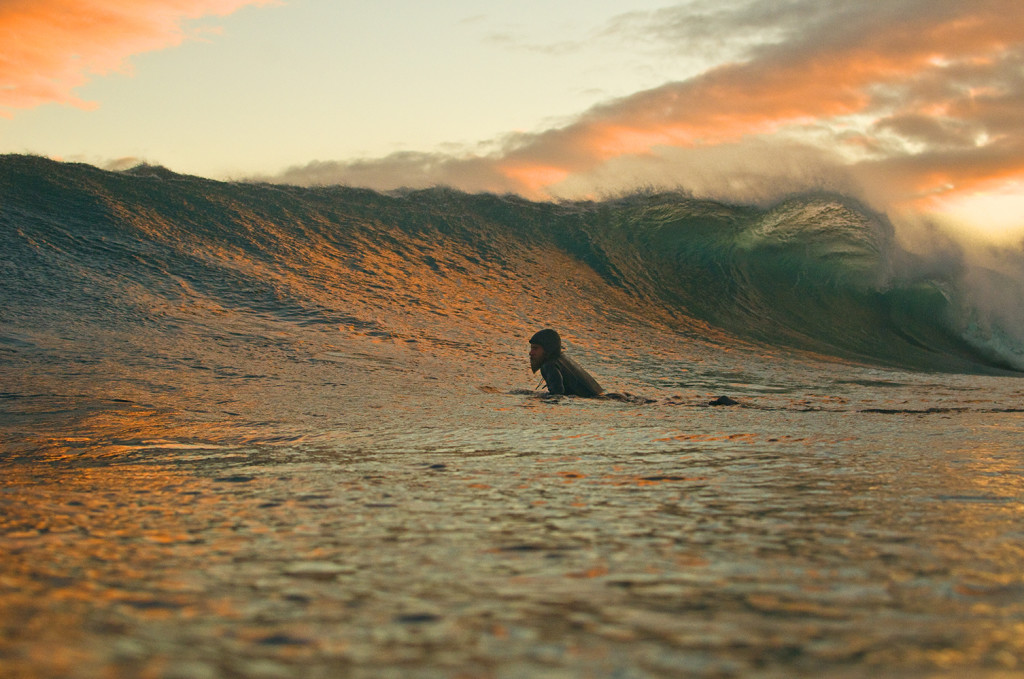 Åge Obrestad, Norwegian champion at the time, paddling out for one more before the weak winter sun dipped for the day.

So whilst this is a cold water issue, and this is a feature about being in extremely cold conditions, it is really, just surfing, it just happens to be cold. 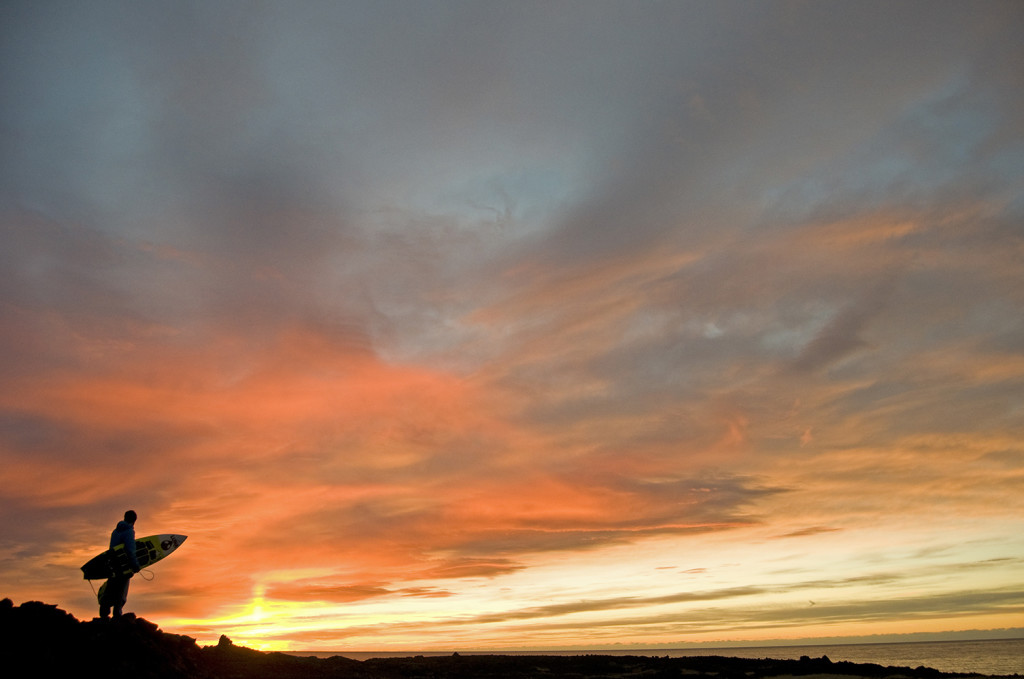 One last look back at the surf.

This feature was supported by Lunasurf, check out their wetsuits and accessories.