We caught up with Steph in France, a few hours after she stepped off a plane from LA, to talk motivation, evolving interests, the importance of good headspace and the delicate line between overtly sexual and tasteful.

To say Steph Gilmore is an institution of surfing would be an understatement. Gilmore has enjoyed nearly two decades of graceful dominance, notching up six world titles and gleaning an almost unparalleled reverence among the surf world.

Not only is she a fierce and smart competitor, but she has managed to avoid succumbing to the robotic three-to-the beach approach that afflicts many of those of her competitive calibre.

She has instead retained a beautifully flowing and effortless style, making her a favourite with photographers, film makers and surf fans alike.

Although generally her appeal has transcended the controversial discussion around the portrayal of female surfers, she did become entangled in that argument after an ad for the Roxy Pro Biaritz received mass criticism for sexualising Steph instead of celebrating her athletic ability.

We caught up with Steph in France, a few hours after she stepped off a plane from LA, to talk motivation, evolving interests, the importance of good headspace and the delicate line between overtly sexual and tasteful. 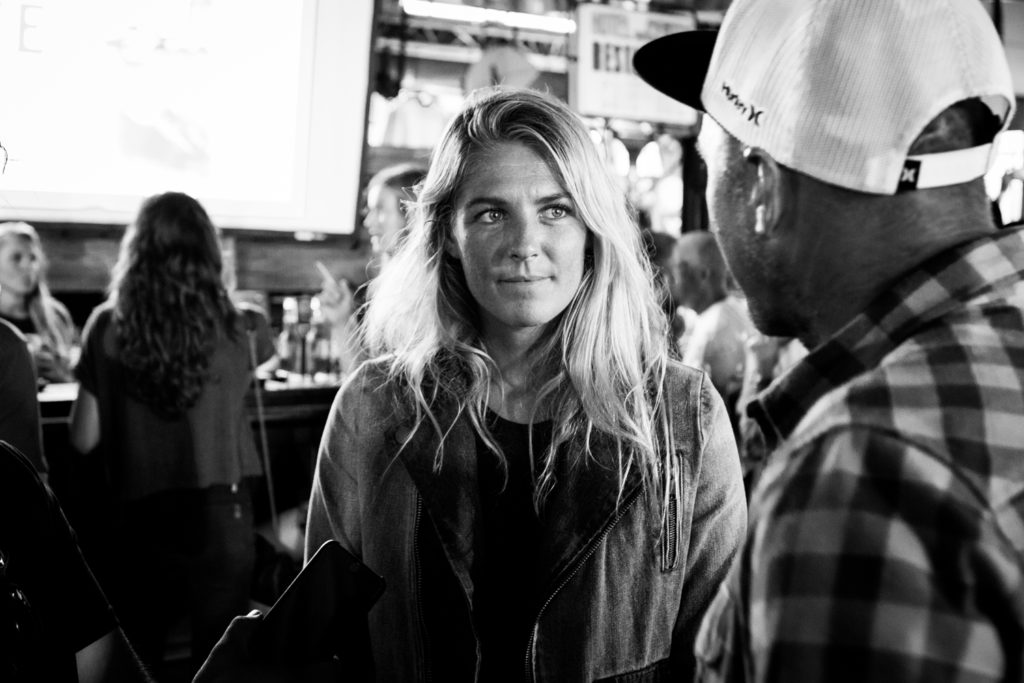 WL: Hi Steph, You’re in France again, how are you feeling?

S: Yeah, good! I just arrived like five minutes ago from Bordeaux airport.

WL: So you haven’t been here getting crazy waves?

S: No, its been pumping though huh, I had some stuff to do in LA.

WL: Some people say they surf as much as they can in the lead up to an event, is that what you do? or are you more like Kelly where you don’t really get in at all till the buzzer sounds?

S: No, I need to surf as much as possible, it’s the best way to do it, but I just finished guest editing a magazine – called Monster Children – it was coming up to deadline and we had a lot of stuff going on which I had to be in LA to finish off, so that’s why I’m getting here so late.

And I actually had an ear infection, which is why I missed Portugal.

Dude send me the fucking email, I’m stressing out here…

WL: When you guest edit, do you have full control?

S: You can have as much or as little control as you want, for me because I was travelling so much I didn’t want to have too much pressure to do everything, but the guys were really cool about it.

They said to me ‘who is it you love to read about?’ ‘Who is someone you’d love to interview?’ you know, ‘What books do you love?’

We did a surf trip to make a short film and they asked me who I wanted to take to direct it, so I took Jon Frank, who’s one of my favourite photographers and filmmakers.

WL: And did you enjoy the process of editing?

S: It was interesting working from the other end of the magazine, normally people will email me saying ‘can we get this interview’ and I’ll procrastinate for ever and now I’ve been on the other side, on deadline, I was like ‘dude send me the fucking email, I’m stressing out here’ it gave me a real appreciation.

WL: Can you tell us a bit more about the short film?

S: It’s called The Tempest, it’s a beautiful piece. I actually met this Italian classical pianist and he scored the music for it.

The music that he plays is actually a really old piece, from the 1800s, so now it’s public domain, because it’s been over 99 years.


WL: How’s your year been so far in terms of comps? I saw some of your heats at Lowers and it looks like you’re surfing as well as ever.

S: I feel like my surfing all year long has kind of been there, but maybe my headspace hasn’t.

I mean you can have all the natural talent in the world and go out and surf a heat, but if you can’t keep your head in the game, or play a smart heat then you’ll lose.

That’s why you see guys like Kelly lose to wildcards, because sometimes your just not in the right headspace and things fall apart. Your timing can be off or you can choose the wrong wave.

WL: Do you ever feel like you’re over it?

S: Well you know, you love to hate it and hate to love it. It’s so awesome when you’ve got two minutes left and you need a high scoring ride, and you’re thinking ‘is it going to happen?’.

I kind of love that about surfing, it’s always changing, you never know, that’s why all surfers keep coming back for more.

WL: We were with Kelly and the subject of an inferiority complex came up – not just with him but with all athletes.

You seem like someone who’s confident and level headed and not like someone who has to prove everything to the world, but do you think the element of trying to prove yourself plays into the all the hours you have put in, or did your world title come differently?

S: I have very fond memories of being a kid and learning how to surf and wanting to impress everybody. I remember being at contest as a junior, and if I got the best score or if I won, the compliments that you get from people, it was like yeah, sick.

I want to keep proving to everyone, that I’m the best and I want to win. But I think after a while, when you start to have a bit of success it turns more into proving it to yourself, because I’ve achieved a lot of what I want to do.

Kelly is so competitive, it doesn’t matter what you’re talking to him about, he’s got to know more or be better at it.

But everyone’s so different, like Kelly is so competitive, it doesn’t matter what you’re talking to him about, he’s got to know more or be better at it than almost anyone and that’s why I’m so inspired by he does.

The way he approaches things with this limitless attitude, he cant stop learning, he cant get enough information, its refreshing to see.

I can imagine a lot of people would reach that goal and say ‘sick I’m done’. They tap out, but Kelly’s like ‘What else can I do?’ 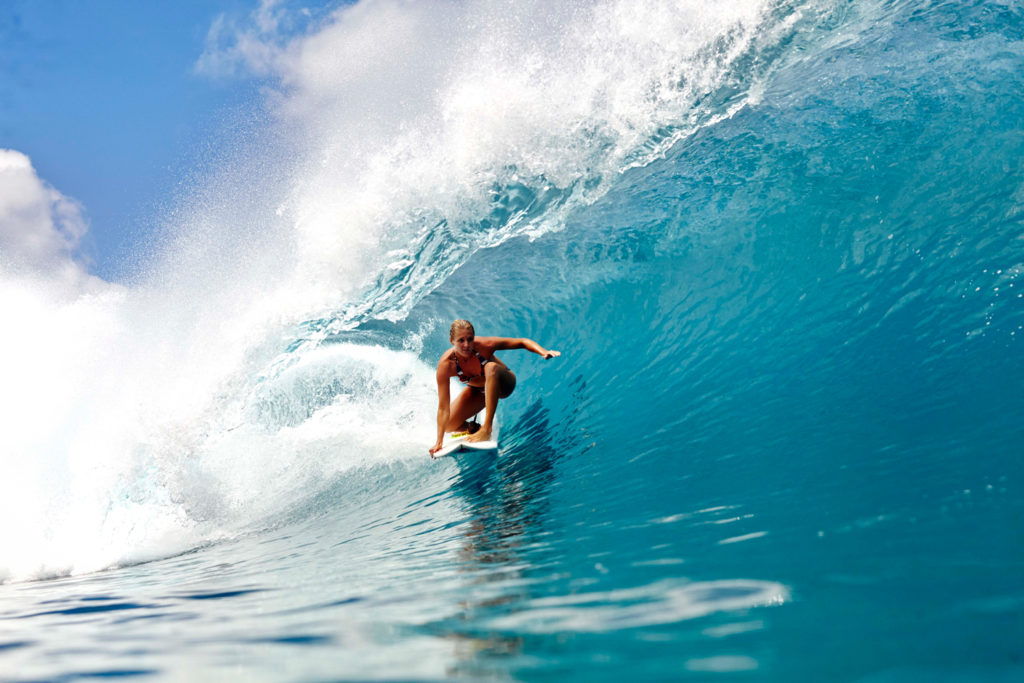 WL: We saw your ping pong game last year and we definitely got that vibe. Circling back to your recent clip, it got an excellent reception online, in fact I believe Kelly said that you surf like people should surf.

S: I know, he said the kindest words.

WL: And so you do you get that same feeling you got from winning those comps when you were a grom as you do now when you put out a web clip everyone loves?

S: Yeah I do. It’s something that really impresses me about John John, that he can do his events and then his whole production, where he makes incredible cinematic surf films.

Surfing is one of the most beautiful incredible things to film and present to people. It’s really not presented to people as well as it could be on a regular basis, so to be able to put together a piece of artistic surf film has definitely become a priority for me recently.

And I think for woman’s surfing in particular, there’s not much female surfing on film and I think when it’s captured right, with the right music, it’s beautiful, it’s sexy and it’s romantic and it’s fucking cool and that’s the way it should be presented.

WL: Picking up on that, do you struggle with that fine line between overtly sexual and tasteful..

S: It’s all about context, if wear your G-string and post it on a men’s website and it will come across like ‘I don’t know about that’, but if you post it on a fashion mags website it is seen in a different way.

Hey man whatever floats your boat, if your into, go for gold, if you’re comfortable in your own skin to wear the tiniest bit of bikini then it’s all good.

But if you’re being pressured into it then I don’t think its cool. If you’re doing it for other reasons than you feel proud about who you are and your body then…

S: Yeah, but at the same time female surfing is sexy, it’s what we wear in surfing, it’s our uniform, in a way girls almost have that advantage, because they can surf well and also have this glamorous element.

WL: Thanks for chatting to us Steph.

S: No worries, see you guys around!