Home » In Conversation With Victoria Vergara

In Conversation With Victoria Vergara We talk jumping between the worlds of academia, surfing and high fashion, using using social media for good and balancing environmentalism with a life of constant travel with French logging extraordinaire Victoria Vergara.

After growing up between the tropical isles of Reunion and New Caledonia, Victoria got whipped into the world of a model/ surfer aged 14 and she’s been traversing the globe ever since.

In that time she’s developed into one of the world’s most graceful and light-footed surfers and captured the hearts and minds of a huge fan following. Nowadays her hectic schedule sees her straddling the disparate worlds of academia, high fashion and surfing, as she jets between pumping lineups and fashion show runways.

We caught up with her at the Vans Duct Tape to talk about juggling these worlds, using social media for good and balancing environmentalism with a life of constant travel. 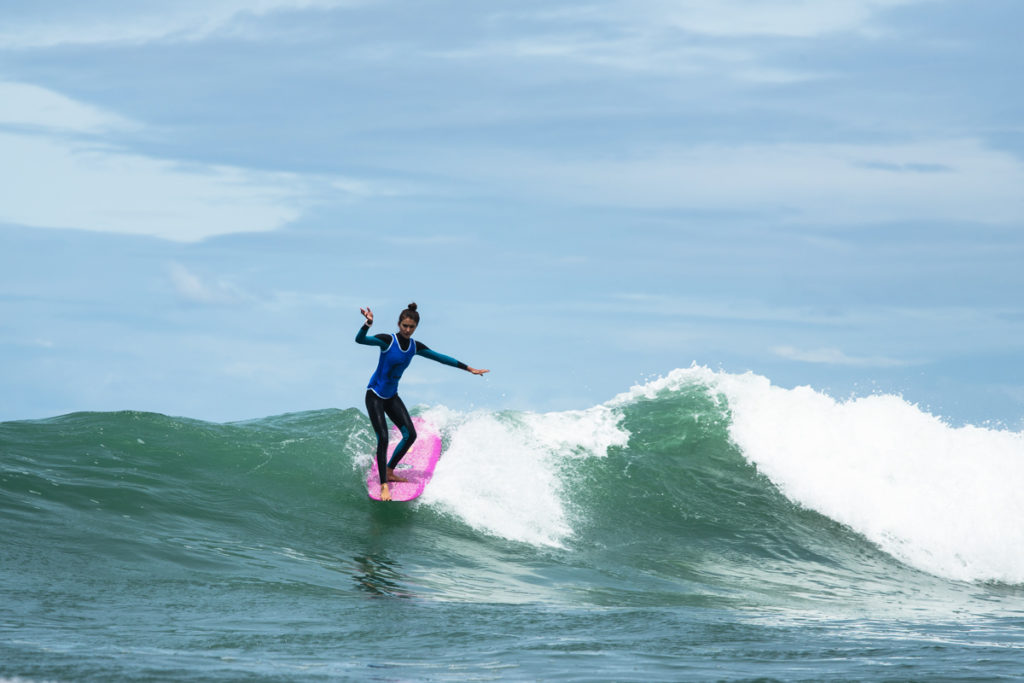 Victoria perches on the nose during her heat at the Duct Tape. Photo @jimmicane

I heard that you’re studying for a degree in journalism, can you tell me a bit about that?

I love school and I was missing studying something, so I thought why not start studying journalism, because I love taking photos and writing. So I took a college course online. But instead of doing it in one year, I can split it and then when I’m ready I will do the big test and then after that I can just be a freelancer. To be honest, it’s been a long time since I’ve worked on it, maybe two or three months, because I’ve been so busy lately, but it’s still going on, and I’ll be back on it after this contest, because I have two days at home.

Yep, then I’m going back to Morocco and then Greece and then Paris and then Holland- and I was only home for one day before this contest! It’s a crazy schedule.

Tell me about some of those trips. Are they photoshoots?

Well, earlier this year I was in Mexico to do a road trip and the Mexi Log Fest, and for the road trip we were doing videos and shoots and stuff and then the contest was at the end. After that I flew directly to Bali for a shoot with O’Neill, which was a fashion shoot and also a surf shoot, then I flew from Bali to home for a day, re-packed and then flew to here. I’m here for the contest and then I’m going to Morocco for a Reef shoot, then Greece for another shoot for Reef, then Paris is going to be a fashion shoot and then Holland for an O’Neill shoot- so I’m always on something.

Woah, that’s a lot of travelling! Is it strange juggling between the worlds of surfing, high fashion and academia? Do you meet very different people in each?

The people are totally different. I feel like I have three different personalities! The surfing family is way more mellow in terms of style, you know, it’s like being able to live in the same clothes for a whole week, just wearing a bathing suit or wetsuit and not really caring about if you have makeup on or not. And then in the fashion world clothes are so important, so for example during fashion week, you have to change your outfit like six times per day. Then I study when I have some more time at home and I’m just speaking to teachers online, I don’t really meet anyone. So they’re completely different but at the same time they’re super complimentary and I think that’s why I love them all.

Obviously they’re all modes of expression; writing, surfing and fashion, do you feel like there’s any other common thread that runs through all three?

Yes, I think photography. I have always loved taking surfing shots, and then art shots, for fashion shows and shoots with my friends, and I really like taking portraits of people when I’m travelling, so I think that’s the main thing that brings them all together.

What kind of stuff do you like to write about?

I like to write about different cultures and countries and the journeys that I have there. I describe the nature and the people and also my feelings, sometimes. But I don’t like to write about sport or contests of fashion or clothes or anything. I would love to write for National Geographic one day, that would be my main goal, because I love animals, and I love every culture that I’m grateful to see during my job and my travels. My biggest piece was about Papua New Guinea, where we were meeting people who had never seen white people before and they were living with nothing but a the same time they were the happiest people, dancing when the sun was out or when it was raining. I would have loved to have developed it a bit more, but then I was off to the next thing.

Is there anything happening in surf culture right now that you think is really exciting?

I think it’s a pretty good time to be a longboarder, right now, because you are way more recognised in the world. We are very lucky to live in this time, because it’s getting even more fashionable and every company wants to be involved and the contests are getting more into the traditional long boarding, so that’s very interesting. Everyone here is such an inspiration; we all came from different places but we all feel like family, so it’s really nice to feel this emotion develop together and we are all pushing each other to the next level so it’s pretty cool.

We saw that you’re really into environmental stuff at the moment, can you tell me a little more about that?

I’ve been doing a lot of beach cleaning with Reef and SurfRider- as it’s a big part of the brand to be very conscious about what’s going on. My mum was very interested in conservation, and she would always teach my little sister and I that it was very important to be careful of what we were eating and to clean the beaches, so I’ve been doing that since I was really young.


My main goal would be to start my own brand out of an environmentally conscious place. But it’s hard to make it my priority at the moment because I’ve got so much other stuff going on. But, I’ve started speaking with some producers. I would love to have more people in the next generation pay more attention to what’s actually going on. And I would love to write about what exactly is happening in the world for the countries where there’s not as much awareness.

Do you feel conflicted having to fly so much for your job?

Yea, but you know at the same time, everything that I’m doing as well is good for the environment, so I don’t really feel guilty about taking so many flights, because unfortunately there is no other way for me to travel, if there were then I would do it.

I think everyone can take smaller steps to be more aware and try to live better with care for the environment. So yea, I’m sad that I take more than 100 flights per year, but at the same time that’s what I have to do for my career. I’m also the kind of girl that every time I go surfing, I pick three bits of trash off the beach. I do stuff like that to try and find a balance between my lifestyle of travel and care for the environment.


I think my parents just raised us like that, we travelled a lot, but we’ve always been really careful about what we’re doing for the planet.

There’s a lot of talk at the moment around the effects that social media has on young people. Obviously you have a massive following on social media, so do you feel a responsibility around what you’re putting out and the impact that could have on people?

Of course, I didn’t really choose to be a public figure, it just sort of came, just from posting me and who I am and trying to be transparent as much as I can be on social networks, but yea obviously we have a voice. I think it’s good because we can use it in a good way, and I use it a lot to talk to the little girls who feel ashamed about who they are and tell them that I was struggling too when I was 15. I was just that awkward young girl, who was super tall with no confidence. I want to tell them that your body is yours and don’t let anyone tell you who you should be or what you should eat, or if you should eat more or less- because we are all unique. I think it’s important to have that sort of strong message as a girl.

Obviously on the environmental side as well, I tell people like let’s create a game, like ‘pick by the beach’- a couple simple things like that can be used very strongly when you have a big following.