Sports are often defined by the people who go and watch them as much as those actually doing them. Association football springs to mind in particular, the various fan tribes being as much the defining factor of the match day experience than any passage of play or venue. Hundreds of thousands of Britons’ entire lives are defined by the weekend rhythms of home and away fixtures, a turbulent pastiche of Stone Island hooligan wear, pints, frying onions, an uneasy marriage of purposeful bigotry with prawn sandwich indifference, the one-eyed outrage of radio phone ins in traffic jams. Near the other end of spectrum is Wimbledon. A crowd very well represented by women of a certain age, who rather than follow tennis, actually focus in specifically on the goings on for a fortnight at the All England Tennis Club in SW19. They mightn’t be able to name the quarter finalists at that year’s Australian Open, but there’s nothing they couldn’t tell you about Pimms, strawberries, Tiger Tim, Murray Mound, Sir Cliff, etc. Not so much devotees to the sport as absolutely fanatical about one particular tournament. Head to Twickers, where you’ll find 90 thousand pale, Cotton Trader top, bootleg jean n’ Timberland, Torygraph-reading, velcro walleted, ‘No bloody sleep on tour!’ bores. Possibly. But who actually goes to World Surf League CT events in Europe to watch them? Core surf fans? Incidental beach go-ers? Autograph/selfie hunters? We decided to investigate. 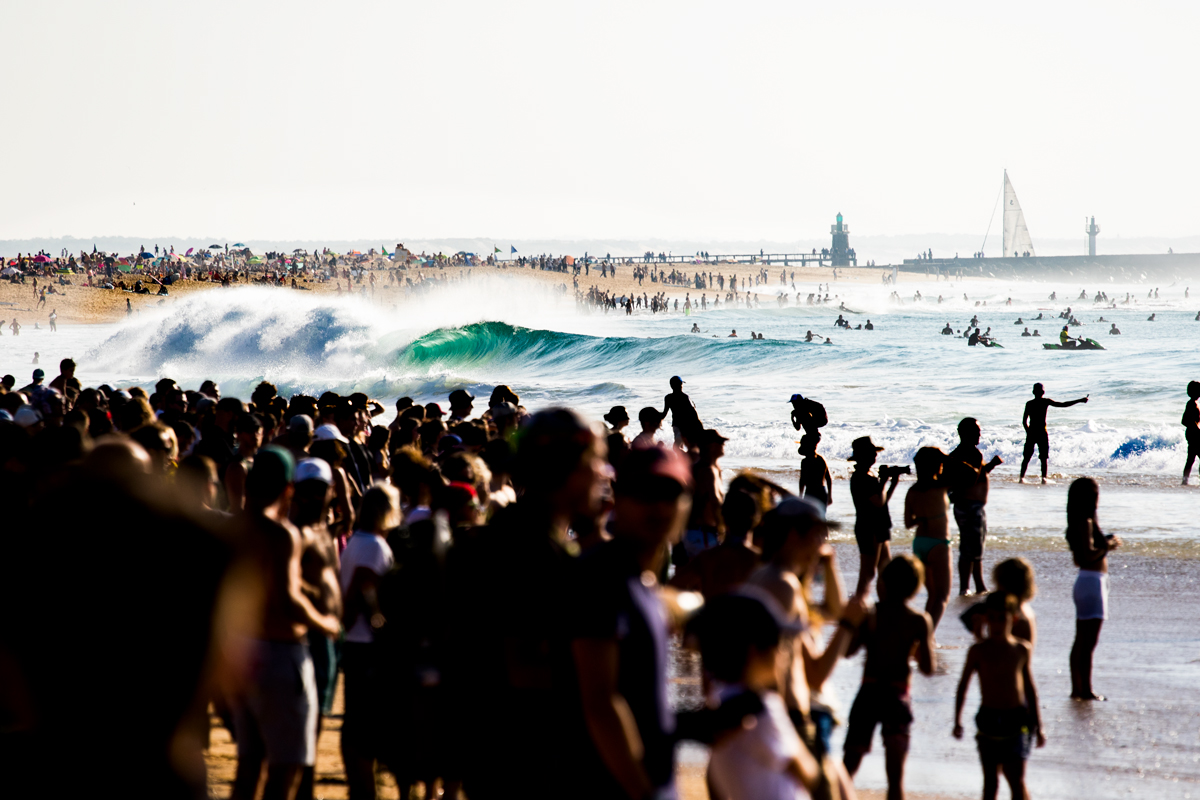 The Self-Loathing Surf WASP The SLSW twitches nervously. Watching a heat for a bit, almost immersed for nearly a full 12 minutes, or so before thoughts return to that right up at… Thing is, look at all the crew. He thinks, semi disgusted. Why so many? He cannot believe how crowded it is ‘this year’. The irony that everybody else came for the same reason as him escapes him, that his trip coincided with a major international event wasn’t a coincidence at all. He hasn’t brought every board in his wretched quiver, just a conservative four board selection, and a very strong sense of entitlement. The number of Rio Carnival go-ers remarking, ‘Bloody ell! People! Dancing everywhere in the streets!’ is none. The number of self-loathing surf WASPS is a lot, and growing.   Well Dressed Innocent Bystanders Unlike most (all) other sports, there always seems to be a healthy smattering of people who went to the beach just as they usually do, only to find a few thou Spaniards on the sand and a loud PA announcing a confusing array of echoey numbers. The thing is, you’d have to be fairly non-observant to have made it to the shorey without realising something was up. Squads of marines with machine guns on the road, Gendarmes with dogs on the path. A few thousand more cars than usual. You know, a few wee visual clues. You can spot the innocent bystanders by the fact that he is probably wearing chino slacks and a bright pastel, probably cashmere golf sweater, even though it’s t-shirt and shorts weather, and she is trying stop the Yorkie terrier doing a slash on a hair braiding bongo couple’s hemp satchel. 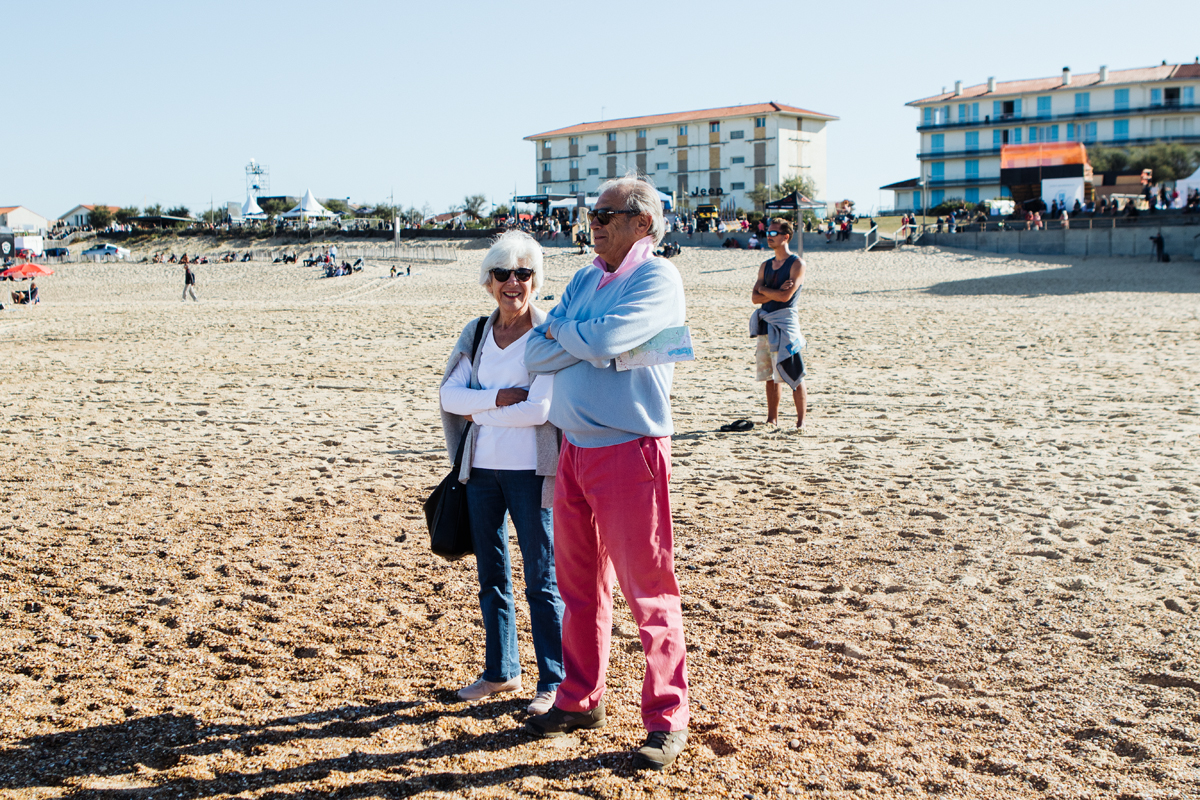 Burning Men & Women In uncertain times, you can still rely on certain truths. Like the toke massive being never far away, and being reassuringly consistent. Sure, ‘erb might have become thoroughly domesticated lately, what with CBD oil and Grannies extolling the virtues of THC gummies on their arthritis, but whatever. At any major surf comp, there’s still a strong representation from the red eyed and slightly paranoid. Crowd density is key to the location of a comp toke outcome, which often ends up being somewhere they feel is just enough removed from the pack, but in reality is billowing bubonic chronic all over the general public. Misjudging the fine line between being invisible in plain sight and being gawped at by literally hundreds of people has harshed many many a mellow. But hey, it was a slow heat anyway. 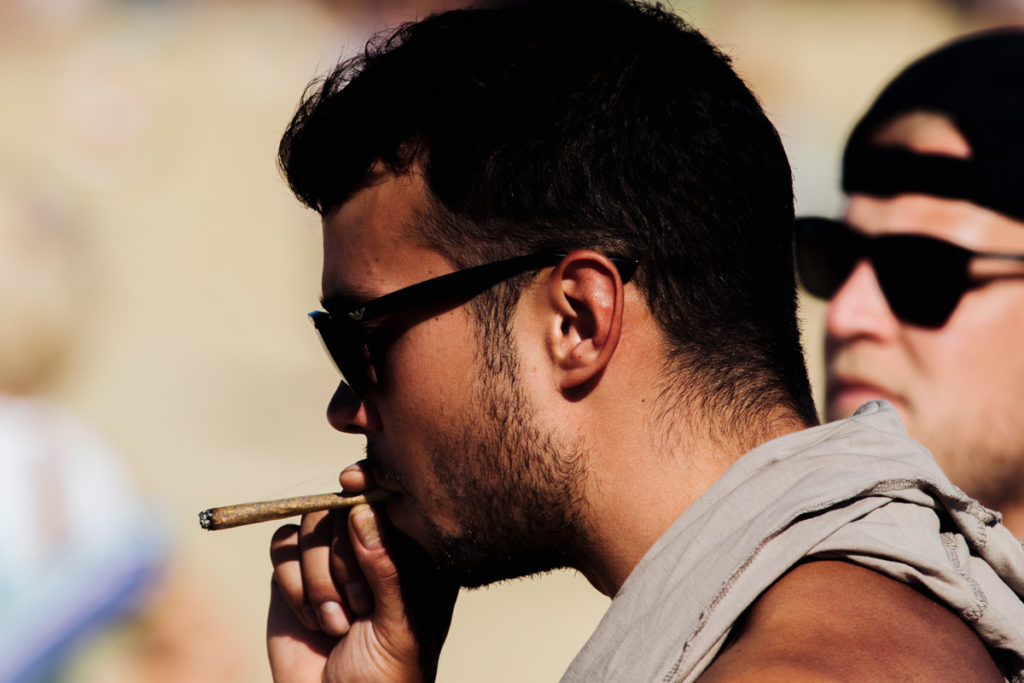 The Surfing is a Sport Fan Probably the rarest of birds, there are some who actually know what’s going on, who’s surfing against whom, etc, that aren’t being paid to be there. They’re following it that closely merely for their own enjoyment. They actually love the ins and outs, the thrust and parry of elite pro surfing. An extreme example could be Rip Curl co-founder Doug ‘The Claw’ Warbrick, who I’ve seen scoring each wave himself in his notepad, then writing down the judges’ score, to come up with his own unique stat, the panel’s margin of error. There are more people than you’d think that are into it this much, mainly because the number you’d think, is none. 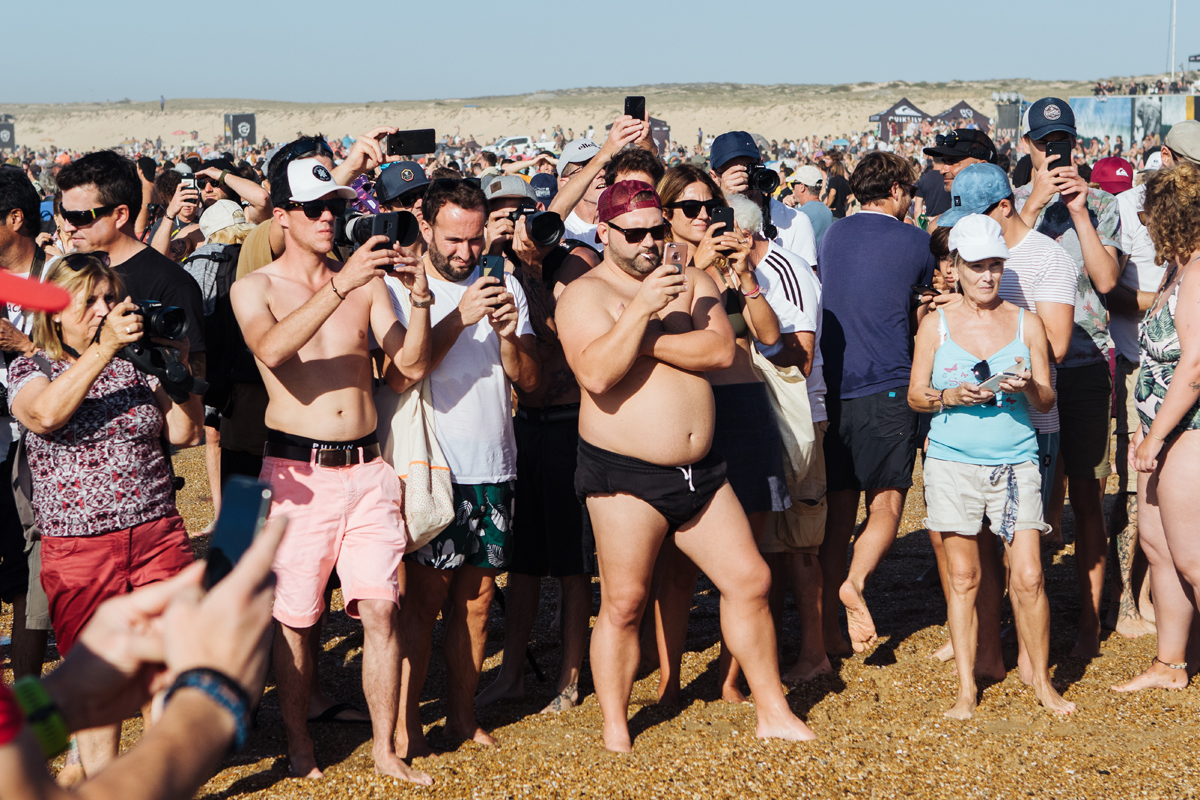 Nearly Naked People Nudity and sport have had some great moments. Usually, though they are dramatic, fleeting and culminate in arrest. Like almost everything, the pics are always better, always more iconic from the 70’s when there was so much more hair, both curtains and rug, so to speak. These days, TV broadcast directors have been briefed not to show any of it, so a plucky Test match lad or  maybe throng of Russian feminists, barely make it on screen. Surfing is a bit different, though. You can be almost naked for 10 hours a day in the middle of a big crowd, on TV, so to speak. Like really nearly naked. I’d love to see what would happen if someone actually went the whole hog and streaked the Quik Pro France. If security dudes in muscle tops and boardshorts would rugby tackle? If a Gendarme would use their beret to cover the bush? Probably not though, seeing as the event is held at a beach where people routinely go nekid. Maybe it’s ok to be nude so long as your stationary, and it only becomes a public order offence when a comedic jog, jig, or cartwheel is added. I’d love to know. 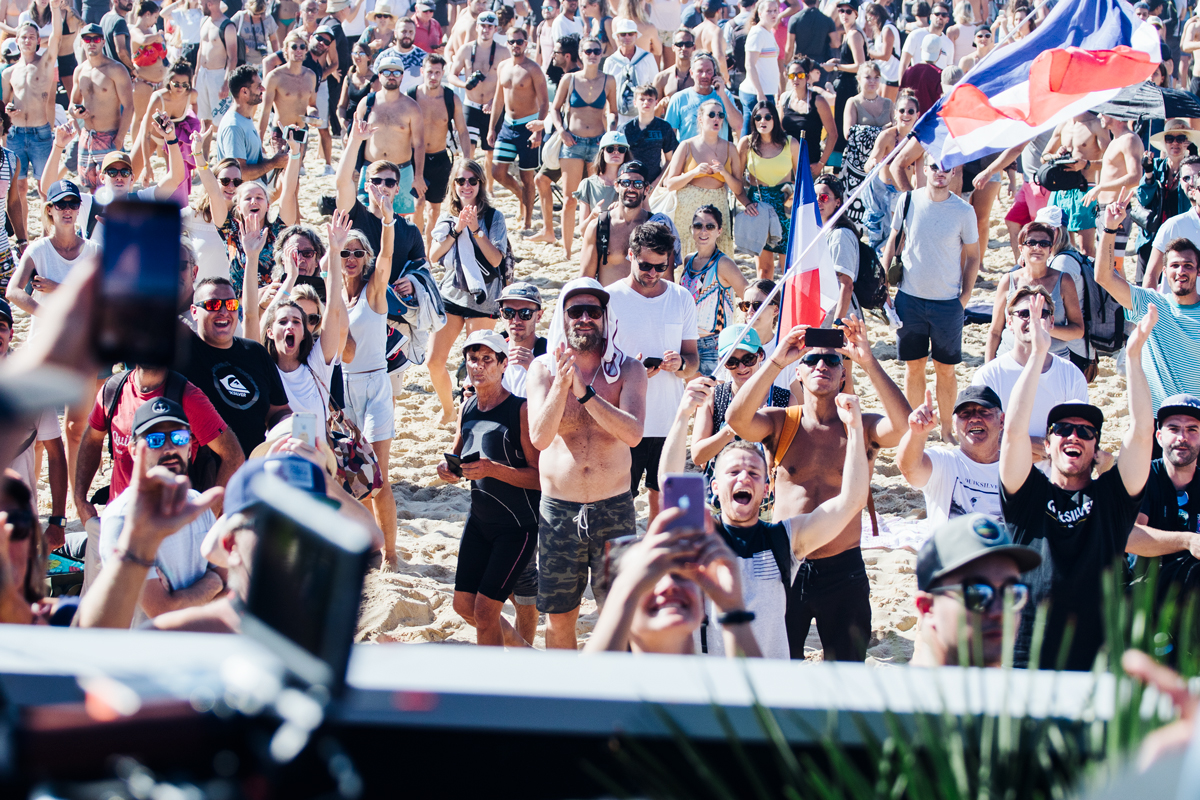 For all the Wozzle’s attempts at recreating a ‘soccer crowd’ atmos, no beach is yet to break out in “ooooooooh you’re SHIT AHHHHhhhhhhhhh” Photo: @lugarts

Young Families There probably aren’t many sporting events in the universe that young parents decide to bring babies and toddlers to as much as a surf comp. You’ve got to admire the gumption of the surf comp going young family. Despite all the odds, despite the heavily continental climate (freezing in the morning, scorchio at lunch), despite toilets being at least a km away on very soft sand, despite no changing facilities, nowhere to get anything to eat, despite high trampling risk, despite the very very slim likelihood of nap time having the faintest whiff of a chance of being respected, folk still think it’s a great place to bring a one-year-old. And despite all those odds, there’s junior, three packets of Pom-Bears deep, happily weeing at will, blissfully unaware of that last crucial change in priority, having the very best time of us all.