Home » Croyde: Welcome to the Shire

Croyde: Welcome to the Shire

The legendary home of surfing in North Devon

The Shire is the lesser known name for North Devon; it is a surfing paradise on its day and I love it. I was born here in Barnstaple on the 6th May, 1975 and have never left, except to go surfing, naturally.

I’ve never felt the urge to move away and why would I? I know people who would chew off their own arm to have the chance to live right here in the Shire. The Shire has a rich surfing heritage although things only really kicked off properly in the late ‘50s and early ‘60s with shapers popping up in small garages as well as people shaping boards in their back gardens.

Before shaped boards were available, people used to have to make do with wooden belly boards which are still popular to this day. When the shortboard revolution hit in the late ‘60s, a lot of the more traditional longboards shaped prior to this got chopped up and re-glassed as shortboards to save the cost of starting from scratch. Some of these old boards can still be found to this day in the roof of the Red Barn in Woolacombe.

More and more spots were discovered, the level of surfing went up and up beyond national level and a local surf scene was defined. I could, of course, go on and on naming people – there are many who have helped shape the history of surfing in the Shire over the years. I always remember as a grom learning to surf on a Paul Blacker Lazar board I borrowed from a neighbour. It was lush and I was hooked from my very first ride. For years, me and my school buddy Richie Cooper, who now resides and surfs in Lanzarote, would surf Saunton after school.

I loved the waves at Saunton; perfect, long peelers which seemed to go on forever – you had all the time in the world. Saunton was the perfect wave for us to learn on. Later, we stepped things up a level and on my Richard Cram twin fin, started to surf other spots in and around North Devon, such as Croyde and beyond.

The Shire has a multitude of different breaks from low tide; world class barrels at Croyde on its day, to mellow, long rides at Saunton Sands. Surfers of any ability will find waves here if they know where to look.

Starting in the north, Woolacombe’s Combesgate Beach is nestled below Morte Point and can rival Croyde when it’s good. It is only surfable from mid to low tide due to the rocks, but it can have great shape and receives much more shelter around mid tide from strong offshore, easterly winds. Just to the south of Combesgate Beach is Woolacombe’s main beach. This is probably the Shire’s most popular beach with ample parking right next to the waves and good accommodation options. It also has some quality pubs, bars and restaurants such as the Red Barn overlooking the beach and Bar Electric just behind, right up to the Marisco night club – the oldest in the UK and still going strong!

Boards and wetsuits can be hired in the village and surf lessons are available through most of the local surf shops. RNLI lifeguards patrol the beach throughout the summer season, which makes it a popular and safe choice for families.

Woolacombe is home to one of the best surf clubs in the country – The Woolacombe Boardriders – boasting members like ex-British Champion Neil Clifton, pushing the limits back in the day, through to Stu Campbell, British Champion in 2011. Other standout local surfers include Josh “I’m a pro-surfer” Witts, Ste Corcoran, Archie “what ya talkin’ about” Willis, Paul Barrington, Alex Gibson, and many more. When the winds blow from the south or south west, Putsborough to the southern end of Woolacombe’s main beach can be a life saver and provide shelter when all the other beaches are blown out and onshore.

It also picks up slightly less swell through most swell angles than the other main beaches, which makes it a good option on macking winter swells. Putsborough can suffer on the dropping tide and works best from around mid tide on the push up to high.

Heading further south around Baggy Point you will find the hub of the scene in the Shire – Croyde Bay. Renowned as one of the best beach breaks in the UK, at high tide, it breaks like many of the other North Devon beaches, but once the tide drops out to low, Croyde can serve up some world-class A-frame peaks and barrels. People have suffered serious injuries surfing low tide Croyde and even smaller days can pack a punch with strong rips sweeping through the line-up. For this reason, it is best left to the more advanced surfers only.

In recent years, its popularity and reputation as one of Britain’s best beach breaks has also been its downfall in some ways, with hot sunny days seeing a huge influx of surfers from all over the country, wanting a piece of the action.

This can turn what is already a heavy beach break into something much worse, so the lifeguards are always kept busy throughout the summer.

Thankfully, you can still find empty peaks throughout the winter months which is when you will find most of the local boys (and girls) who haven’t headed off to warmer climes, out in the line up. These include me, of course, along with Taz Knight, Andrew Cotton, Simon Skelton, Lyndon Wake, Billy, and Laura Crane.

On past Croyde is Saunton Sands, the place I learnt to surf and also one of the best longboard waves around. For good reason, it is home to one of the best and most competitive longboard clubs in the country – the Hotdoggers – with surfers such as British Longboard Champion, Ben Haworth, along with Ashleigh Braunton, Greg Norman, Greg Robinson, Phil Hill, Eric Davies and of course, Norman Wright, the chairman.

At mid tide, ‘the Cave’ breaks; the line-up next to a large cave in the cliff face, where the banks line up and the waves peel hundreds of metres down the sandbar. It is comparable to a mellow right-hand point break; not great for your average thrusters, but you can have all the fun in the world on a retro twinny or a longboard. Of course, there are many more spots in North Devon if you are willing to look hard enough. One of the not-so-secret spots is The Point, where I’ve had some of my best ever surfs over the years. It can be epic, providing long rides with good turn sections and barrel sections through the inside. It was first pioneered in the early ‘70s by the likes of Bruce Palmer, Tim Heyland, Mark Wheel, Kevin Cross and Richie Carter.

It always has a strong local crew on it when it’s on and it’s not a spot you can just paddle out to the peak and help yourself to. When I was a grom, I can never forget it was the likes of Mark Wheel who I had to prove myself to in order to get a wave.

As with any of the more ‘local’ spots, you should give the locals their space and respect is the key to success out here. Hours and hours have been put in to get this wave wired long before some of the modern local crew were even born. Respect this, snag a few on the shoulder and one day, you may get the wave of your life… if you’re lucky.

This article was originally published in Wavelength issue 229. Be the first to get our articles in print and online by subscribing here. 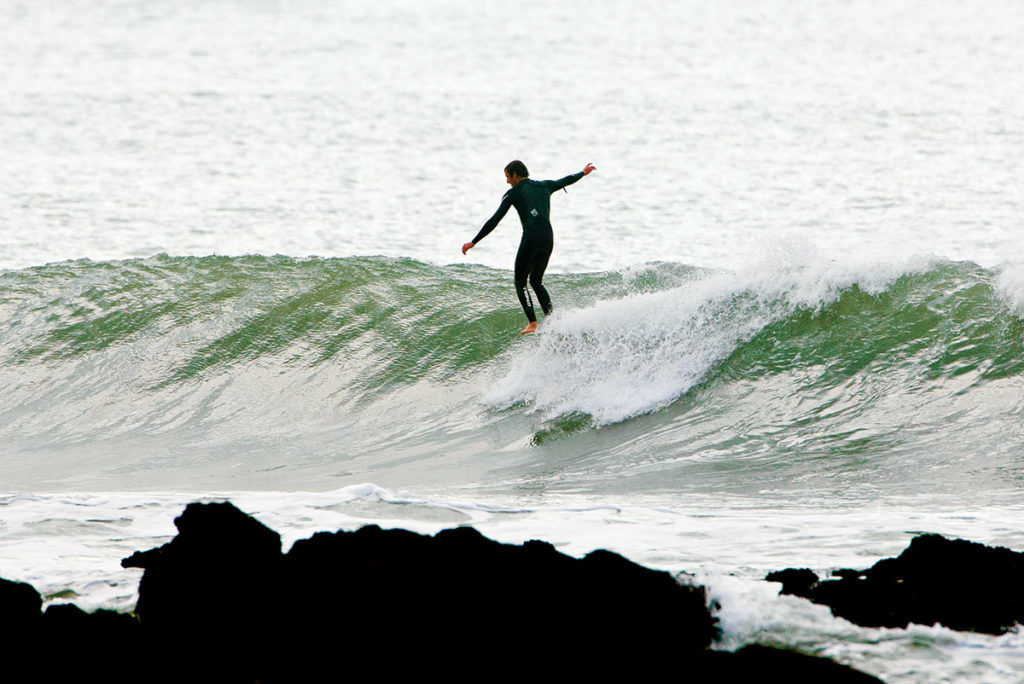