Culture Wars: Surfing At The Olympics

[Surfing in the Olympics? High time the competitive side of the sport got the truly global platform it deserves? Sacred pastime of the ali’i whoring itself in the quadrennial ‘30 billion dollar advert for the world’s worst companies’? With Olympic surfing upon us, it’s time to brush up on the lyrics for the Hawaiian national anthem* / boycott the entire shit show altogether… Surfing’s comin’ home (to Tsurigasaki Beach)!]

The Duke was a surfing Olympian many moons before Dominic Barona and Leon Glatzer became two of the most famous surfers in the world you’ve never heard of, just not for surfing. While he won gold 100m freestyle in Stockholm and Antwerp, it would be well over a century before his first love, surfing, would debut in Tokyo.

So what’s the problem?

If surfing were to have a soul searching quandary over whether or not it really wants to be just another archery/ping pong/synchronised swim, rather than a sacred lifestyle choice centred around dedicating oneself to living in tune with the cosmic rhythms of the universe, well that horse bolted long ago (party waving in a B&W Guinness ad).

The post pandemic surf boom now means you could cross step to the moon and back on daily sales of Decathlon foam boards stacked nose to tail, pausing only momentarily to tssssss Branson/Bezos at the edge of the exosphere at their tone deafness, whilst having a quick whinge that the solar wind’s come up early, a-gain.

So if surfing keeping itself special is no longer an issue, what’s the beef on a payday for your fave Central American with a Euro passport?

While global wavepool tech has come online just in time to offer a guaranteed start time and the much vaunted ‘level (but, crucially, undulating) playing field’ for Tokyo 2020, Fernando Aguirre, the little guy who chose a dickie bow in the tropics as his central self-parody accessory, also the man behind Reef Brazil‘s man surfing, woman in dental floss thong bending over iconography, has repeatedly stated his desire for ocean surfing, over any plastic, chlorinated replica.

Steph Gilmore, among others, doesn’t agree “A wave pool made sense that we get the same opportunity as each other and it comes down to your performance on the wave and that’s it.” Alas, despite eleventh hour flirting from the brand new PerfectSwell wavepool in Japan, and pretty much every Olympic surfer heading there for an IG warm up shoot, the ocean’s non level playing field it is.

In many ways, none of them wave qual or level playing fields, it absolutely should be in a pool; Olympic surfing in a wave pool is like late capitalism’s ultimate sub/dom dungeon, perfectly capturing the commodification of everything, even stoke. If the modern Olympics are a festival of corporate greed masquerading as sporting tournaments, and one of capitalism’s central tenants is to take common, public goods and create false scarcity by making them private, then rent access to them, then the Olympics & wavepools seem like the perfect fit.

Meanwhile, despite it being half a foot for the entire waiting period for 2020 when the Games would have run, in the lead up to the 2021 dates, a huge south swell is headed to Chiba, looking like Aguirre had it right all along. Fernando, take a bow (tie).

Aside from the pool/sea squabbles, there’s also been a certain amount of disquiet lately around the 50th State of the Union surfers representing the stars and bars, rather than Hawaii. This one is due to pro surfing‘s rare administrative nuance of having surfers compete on tour under non UN recognised sovereign state sub-regions, and why you see Hawaii, Basque Country etc next to surfers’ names on heat sheets. So whereas the WSL leaderboard shows the Hawaiian flag next to Carissa and John’s names, it’s replaced in the Olympics, by a star spangled banner.

Meanwhile, the rainbow nation flag of SA was recently replaced in the men’s competition by Il Tricolore of Italy, as an injured Jordy Smith was replaced by Leo Fioravanti. With France, Germany, Italy and Portugal competing, Europe is almost on par with South American representation, which has 5 nations in the mix (Brazil, Chile, Peru, Ecuador, Argentina). 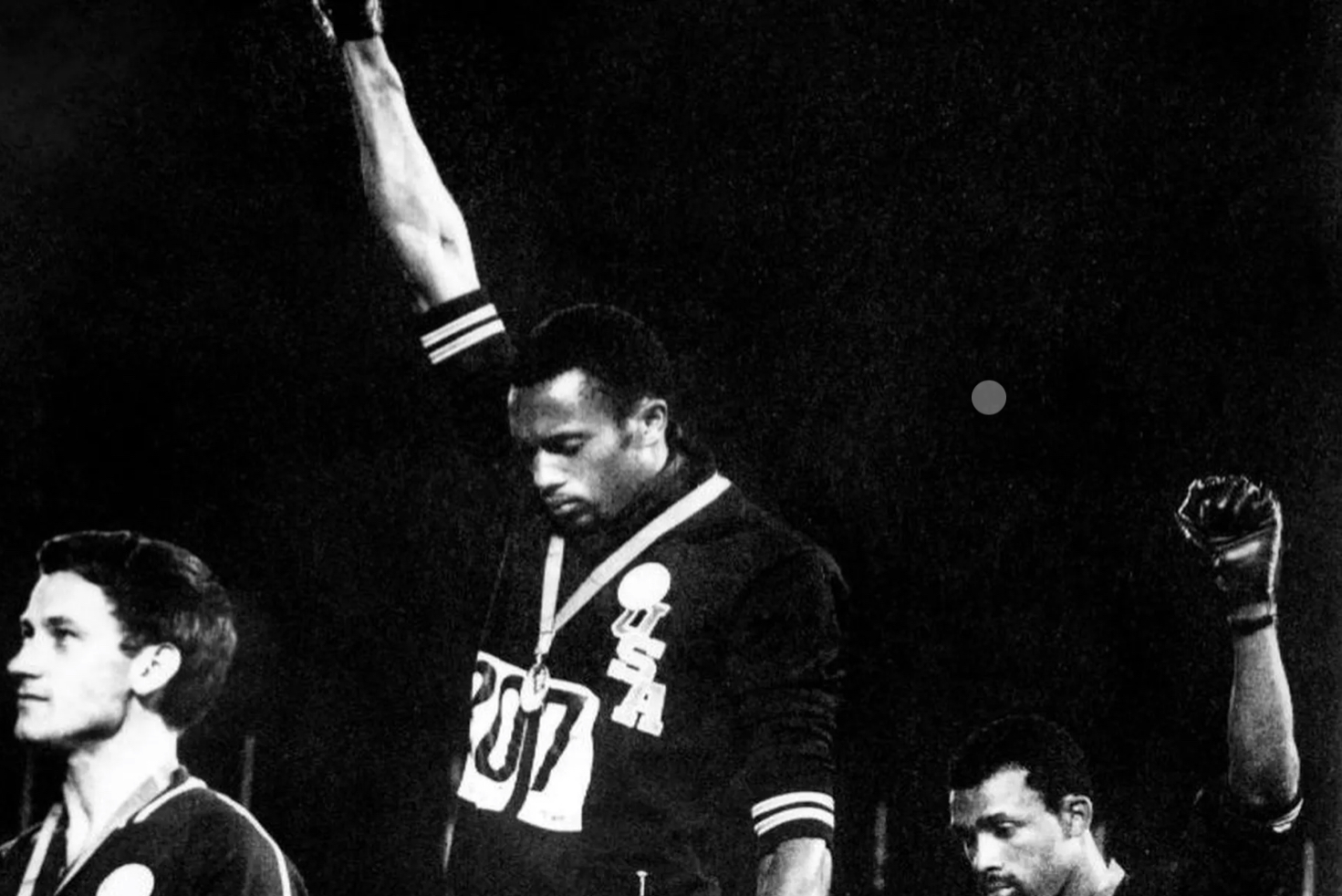 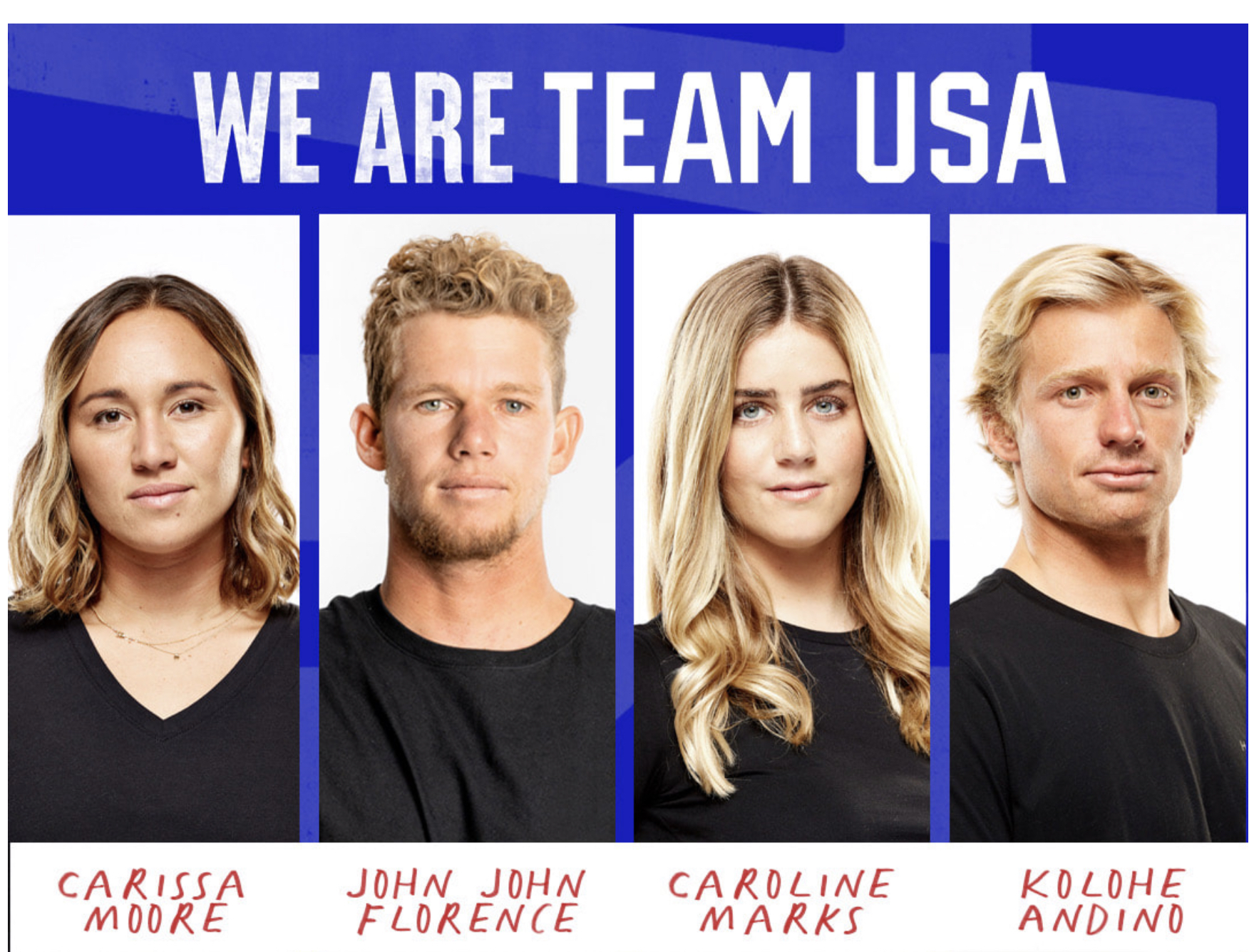 (L) Black power at the 1968 Games. For 2021, any images of the taking of knees is strictly prohibited from official Olympic and partners’ social media channels. (R) Unlike for WSL events, where surfers like Florence and Moore fly the Hawaiian flag, in Tokyo they’ll be Americans.

In this crowded world

If you’re one of those people who’s staunchly anti Olympic surfing because you think the lineups are busy enough already, And don’t want to encourage more Olympic inspired crowds, don’t fret. After the London 2012 games, when GB won an unprecedented 29 gold medals and finished 3rd on medal table behind USA and China, participation in sport across all age groups actually went down across the UK.

Rather than inspiring the public to action, it turns out medals success is merely an admin/investment pissing contest. In fact, despite just 7% of the UK population being educated in private schools, over a third of Team GB medals won in London and Rio were by athletes educated in fee paying schools (over half in rowing).

[Stretching before surfing? Jaunty little mince up and down the sand? As with so many of surfing's polarising issues, being decisive is more important than being right. The executioner’s blade [...]