[Stretching before surfing? Jaunty little mince up and down the sand? As with so many of surfing’s polarising issues, being decisive is more important than being right. The executioner’s blade glistens in the early morning sunlight; be on this side of the block, be on that side of the block. Anywhere but caught betwixt the two.]

There are but two types of surfer in the world; those that perform preparatory physical activity immediately before paddling out, and those that don’t.

For all our perceived diverse individuality as wave riders, we each and all fall into into one of these two very distinct categories.

Either you stretch on the beach, windmilling arms, puffing out cheeks as you a lean over an earnest buttock, or you simply do not.

Different warm ups for different folk; I’ve a good pal who sticks religiously to the very same pre-surf warm up he’s performed since school. In fact, he won’t surf if he can’t do it. It’s repetition, it’s muscle memory, it’s become second nature.

First he opens his diaphragm, the large muscle that regulates the size of the thoracic cavity. As this muscle contracts, his lungs open creating a deep, long, steady in breath.

At the exact same time, the forefinger knuckle adductor muscle contracts, lifting his fingertip from covering a small hole. As he’s been doing that, the thumb adductor of his other hand has turned the wheel of a Clipper lighter. The chamber of his water pipe empties into his lungs.

For most folk, though, it’s mainly just about stretching.

Who Made Us Warm Up?

“Sport… lifestyle… art form,” starts Jean-Michel Vincent’s enchanting intro narration to Free Ride. Considering surfing as very much the first of those three makes us a warm up a natural choice. Today, warm ups before surfing attack the general public from both ends, and guess what?

Both bear the sinister touch of the cold, dead hand of capitalism.

On the elite, performance end, live WSL event streams of pros furiously heat prepping is like a warm up propaganda channel, on loop in front of impressionable kids – of course they’re going to think it’s the right thing to do.

Sally Fitz is squatting on an Indo board while catching a tennis ball lobbed at her by a polo shirted man from the High Performance Centre. Maybe there’re Beats by Dre headphones, maybe wide rubber bands around both patellas.

At the other end, surf schools propagate widespread warm up doctrine to the sport’s freshest inductees.

Surf school warm ups probably make sense from physiological point of view, but better yet, they also use up time. 15 mins jogging on the beach is 15 mins less you’ve got to supervise them in the water. For a 1 hour lesson, that’s a 25% reduction in probability of drowning.

The windmilling arms are not contagious as such, but are mighty pervasive. As a result, today the Algarve has some of the highest pre surf warm up percentages in surfdom.

Ever since March 2020, science has had a ‘the’ preceding it. It’s not some science.

And like with so many things, the science is ambiguous. Should you stretch your groin, or shouldn’t you? One leg straight, one leg bent, push down on the straight one?

Should you do that knee wiggle rotation thingy with hands on your kneecaps?* Will stretching make your muscles actually weaker and more prone to injury. Shouldn’t you instead elevate your pulse?

We don’t really… care. Bad for you, good for you. Carbs. Keto. You can quibble all that amongst yourselves. 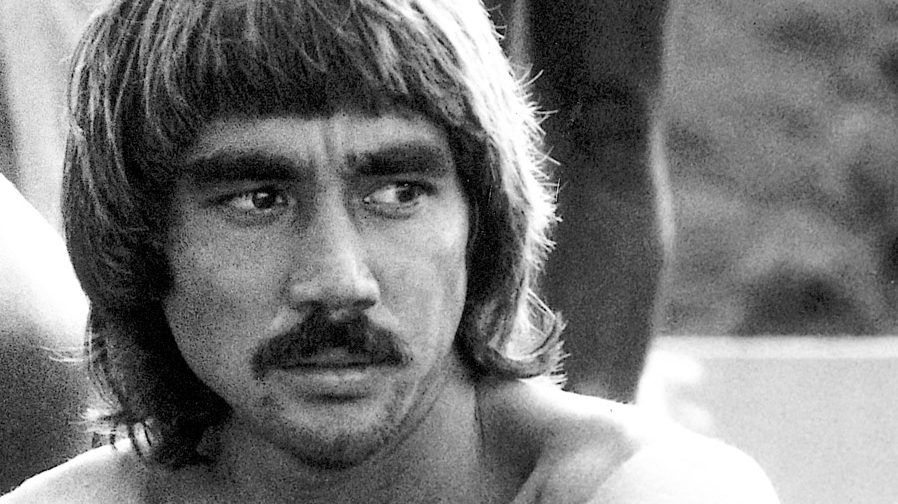 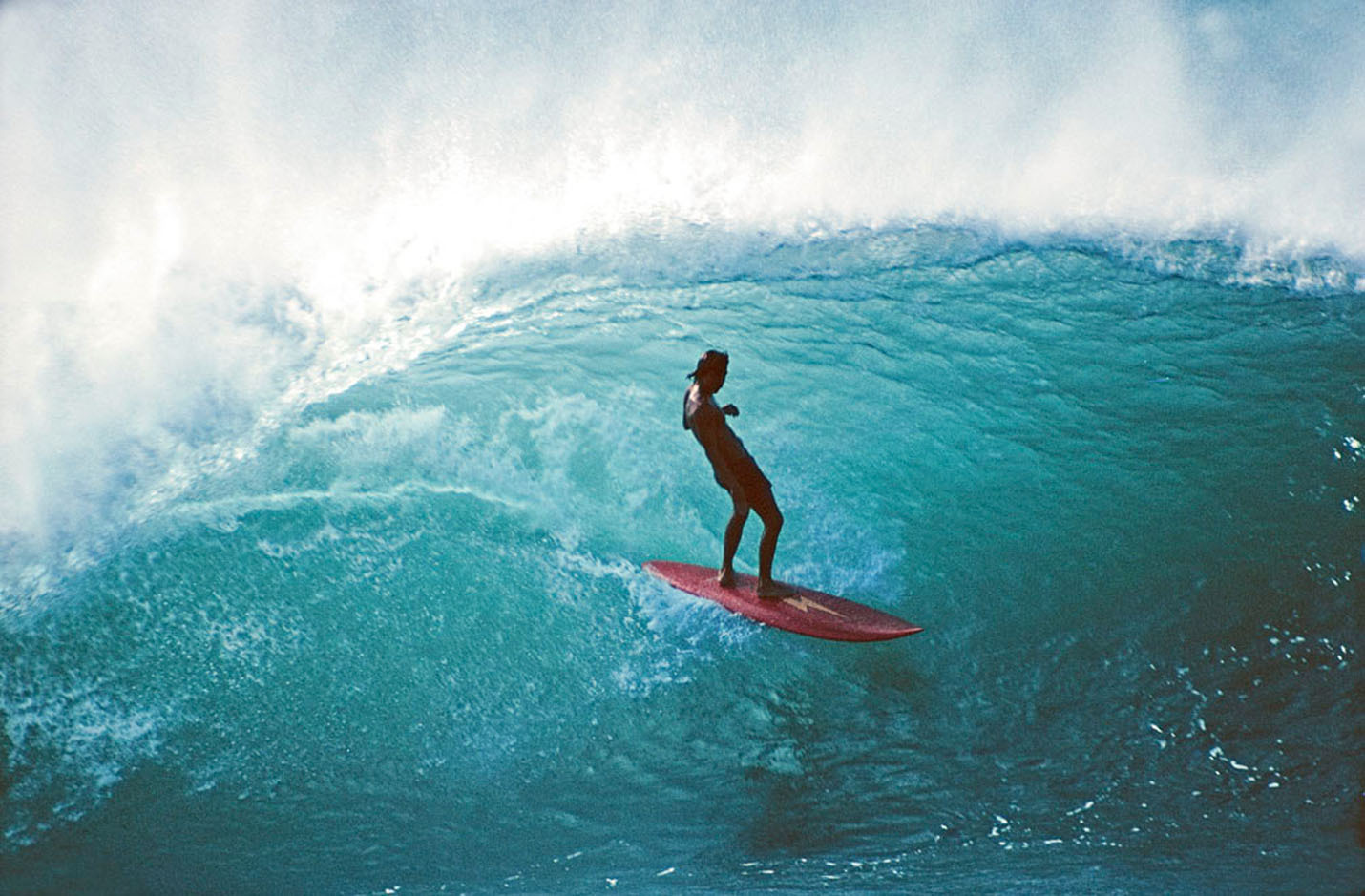 If Not Just Before Though, Then When?

If you’re not on the CT, not having a surf lesson, not coming back from surgery, are self conscious of the social stigma of a beach warm up, but don’t want to sustain soft tissue damage/limit your own wave riding possibilities, take a pointer from one of the most flexible tube riders, and greatest humans of all time.

“Yoga began for me in early 1968” says Gerry of his stretch in Hawaii’s Freesurf Magazine. “I was going to the University of Hawaii and saw some girls gathered around a bulletin board. They were looking at a notice of a yoga class that night in the empty lot across from Varsity theatre. I went to the class hoping to see the girls again but instead, I found a path that I’ve been on ever since.”

Classic Lopez: Profound, but light. Informative, but not didactic.

Gerry tends to stretch at 5am, less so immediately before paddling out.

Moons ago, in J-Bay, incidentally the same time Jon Frank was there filming Litmus, a Western Australian man with a neck beard accosted me. “French surfers? They like to do warm ups, don’t they?” I said I didn’t know… but probably. His girlfriend nodded. “And then they don’t take the sets” he snorted.

I asked someone else at the hostel, and he’d mentioned it to them, too. Apparently it was a real sticking point for him. As far as I was aware, there were no Gauls in sight, or in town at all. It did demonstrate the depth of feeling some have regarding warm ups.

While times and attitudes have changed, there still exists a genuine aversion to being seen warming up in some sectors of the surf community. “I might have a little stretch in my kitchen before leaving, but never on the beach” said one non beach warmer upper who may or may not have been WL‘s own Head of Influence @lugarts, “in case somebody I know sees me.”

It’s busy day today at the beach where I live, and in the interest of data-driven reporting, I spent an hour this morning watching the comings and goings of throngs of excited surfers. Well, mainly the comings.

Confronted with fast, semi closing out overhead peaks on the back end of Storm Justine‘s trail of destruction, of 42 non-professional surfers that arrived and paddled out across two breaks I was observing, 17 performed an on the beach warm of some kind, and 25 didn’t.

I was was unable to ascertain whether those 17 mainly self-identity with Gerry, Sally or Mick Fanning, although a combination of all three seems most likely.

10 European Waves To Surf Before You Die

How many of these Old World classics have you ticked off?

From the high latitude Scandinavian outposts preferred by bearded rubber fetishists. To Macaronesian Atlantic isle beauties and much on the Continental mainland between, Europe has an embarrassment [...]