A sign of the times, but is there hope for the future?

Over the weekend the autopsy of a dead pilot whale in Thailand revealed 80 plastic bags in the animals stomach.

A team of vets tried for several hours to resuscitate the animal, found alive in a canal near the Thailand’s border with the Philippines, but their efforts were unsuccessful. The whale was said to have vomited up five plastic bags during the rescue attempt and a subsequent autopsy revealed that its stomach contained over 80, weighing in excess of 8kg.

Experts believe the whale may have ingested the bags due to their resemblance to squid, which is a staple of the Pilot whales’ diet.

Thon Thamrongnawasawat, a marine biologist and lecturer at Kasetsart University, told the Guardian that the bags had made it impossible for the whale to eat any nutritional food.

“If you have 80 plastic bags in your stomach, you die,” he said.

Thailand, and its South East Asian neighbours are some of the biggest ocean polluters in the world, with 60% of the world’s marine plastic pollution coming from China, Indonesia, the Philippines, Thailand and Vietnam. 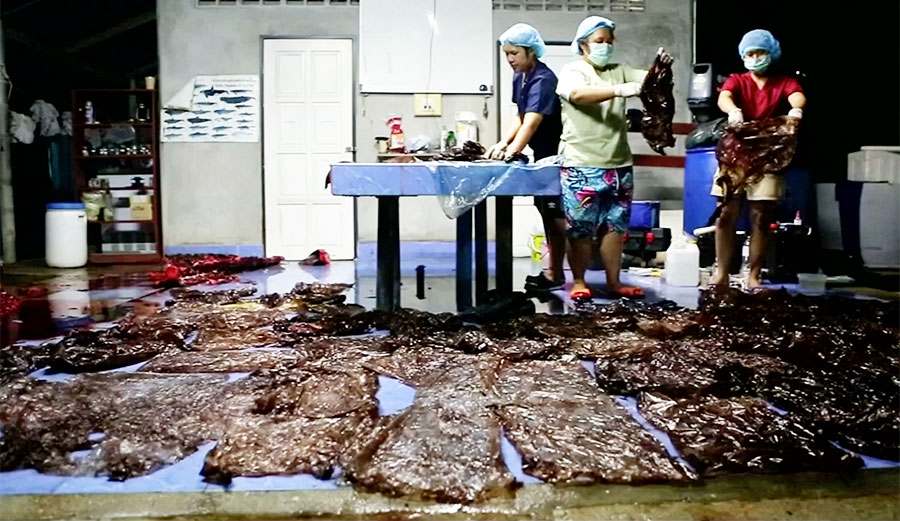 The excavation of plastic from the dead whale’s stomach revealed a truly shocking amount of plastic. Photo Thai Whales

However, there is hope for the future. Last year China announced that they would no longer be importing and recycling massive amounts of plastic waste from other countries, opening up a gap in the market that other South East Asian countries are likely to fill. The global need for large scale plastic recycling centres, close to industrial hubs, where labour is cheap, is as large as ever and by creating a profit motive for these countries to build the necessary infrastructure, their domestic recycling policy would undoubtedly become more efficient as well. Environmental campaigners are warning that the inception and growth of such an industry in these countries would need to be carefully managed and regulated to ensure human and environmental health are not secondary to profit.

While the prospects for these sorts of developments in the region are not without its pitfalls and caveats, if plastic waste were to become a commodity, to be recycled and re-sold, much less of it will end up tossed into the sea.