Cold, brown, polluted and fickle, but not always uninviting.

It’s always colder than I expect on the east coast. Sitting on the freezing railings overlooking the beach at Scratby, the north westerly breeze is biting.

Richard pulls up, he opens his van door and I get a whiff of Gudang Garam smoke. He sits next to me and offers me one. I’ve never smoked except for the odd Gudang in Indo; that taste, that smell and the sweet sugar on your lips as the tobacco burns and you draw the sticky sauce through the filter.

He sparks one up, I am instantly transported to a cliff overlooking a long left in Indo – long period swell lines wrap in from the Indian Ocean and unload on a perfectly foiled reef.

A gust of wind takes the smoke from my face and I’m back to reality, short period swell lines pour down the beach. I grew up surfing here; it was just a mile and a half cycle ride from my house in Ormesby. I used to lay awake in the summer with my window open, listening to the distinctive wail of an offshore shipping buoy. Sat off the top end of Scroby Sands, a treacherous bar offshore, it signalled the slightest bit of swell. Then I’d get on my bike at first light and gun it to the beach, only to find it nine times out of ten exactly how it was now, windy, with short rippy lefts. We used to surf it a lot and occasionally it would throw up a dredgy section, but despite the cliffs, it was never like Indo, and today was no different. We’d surf it anyway of course.

I wasn’t laughing as I was actually badly concussed, and spent the next few hours spewing and generally not knowing what was going on

Out at sea, the north end of Scroby Sands was a maelstrom of white water. “Remember when we surfed that?” Richard chuckled between drags. I could – it was the closest I have ever come to losing my life. Despite months in Hawaii, Indo, Oz, the South Pacific and hypothermic times in Iceland, the Scroby Sands session was the sketchiest moment in my twenty five years of surfing.

Three of us launched a boat from the beach at Hemsby; there was a small swell running, but it looked like it would be head high out on the sands. We got out there easily and arrived at a slack low tide, but the waves were not the reeling Superbank-like perfection we had hoped for, more like a chest-high shifty shorebreak. It was fun, not epic, but more fun than we would have got on the beach. 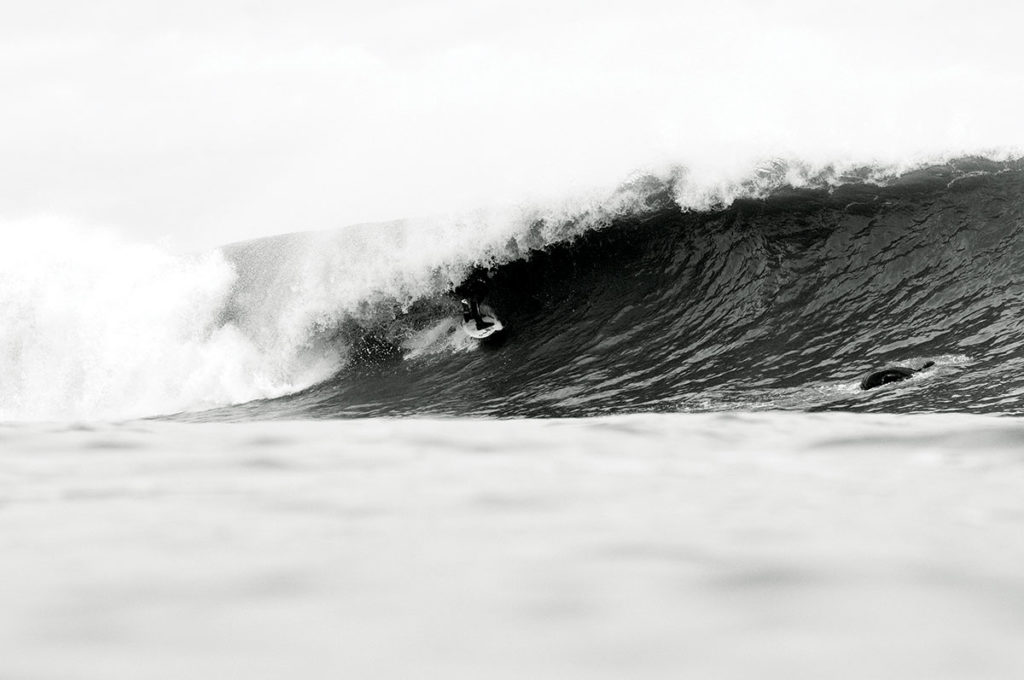 Then the tide began to push, the surf got considerably better but the current was a nightmare. After 10 minutes we couldn’t get back to the peak, which was a problem because our boat was moored fifty yards further out. After 20 minutes we realised we were totally screwed, we were able to stand up to our waists in water at the moment on the sands, but that wouldn’t last for long and we’d have no other choice but to paddle for shore.

Paddling with that current meant we’d end up around Great Yarmouth somewhere, which was a scenario we didn’t really want to happen. Another 10 minutes elapsed, we had all made a paddle for the boat, but the current was pretty savage by now. We were resigned to losing the boat and having to paddle in when the next thing I knew the RIB was bearing down on me.

The rising tide and current had broken the anchor rope and the boat came out of nowhere smacking me square in the face. I saw stars whilst the boys paddled for it, scrambled in and got the engine started. They swung it round and picked me up, laughing at the already swollen shiner I had developing.

I wasn’t laughing as I was actually badly concussed, and spent the next few hours spewing and generally not knowing what was going on. It had been a stupid thing to do, but looking back on it, pretty funny.

As we got out of Scratby the swell was building. Richard had to bail for work in London the next day, whilst I cruised south following tide and swell into Suffolk. I love the Suffolk coastline; once south of Lowestoft it is desolate all the way to The Deben at Felixstowe Ferry.

Sure little towns like Southwold and the now uber-posh Aldeburgh break up the barren stretch, but if you’re prepared to drive and walk a few fields you can find a few little peaks to yourself. They are often too small – the coast bends away from the swell here, but when it’s big enough it is almost always clean. Today was small and clean, fun to surf, but nothing special. Fishermen dragged their boats up through the surf, selling their catch straight from shacks. It doesn’t get fresher. In the distance sat the looming monstrosity of Sizewell nuclear power station, the one boil on an otherwise stunning bit of coastline.

The next swell was a cast iron reason for a road trip. Solid groundswell from off Norway and a day of clean winds forecast in the North East. Back in the day spotting these was an art form, a brief glimpse of the weather chart as low pressure slipped into the swell window.

That was often all we’d see, then load up my mate’s brother’s van and make the trek from Norfolk to Scarborough. Sounds easy, but driving through the Fens and then through Lincolnshire is a long, shitty journey on crap roads, especially when you’re stuck in the back of an Astra van cocooned in the middle of boards and stinking wetsuits. We never stopped in Lincolnshire; I have no idea what the sand bars of Mabelthorpe and Skeggy hold.

Maybe one day I’ll find out. It was and still is a joy to reach the Humber Bridge, then across to Driffield and down into Scarborough. Today, as always I am pleasantly surprised by how much more swell there is here than in Norfolk, just a couple of hundred miles difference and a lot less offshore sand add meters to a swell.

The wind is bad though, so I point the car north and in a couple of hours am getting suited up near the Scottish border, where it’s smaller than the Borough, but fun and I’m alone on a wave that isn’t epic but is super clean. It’s chilly and I’m not fully back in North Sea mode yet, wearing my 4/3mm in February, but wettie technology has come a long way and it’s good enough for a session. 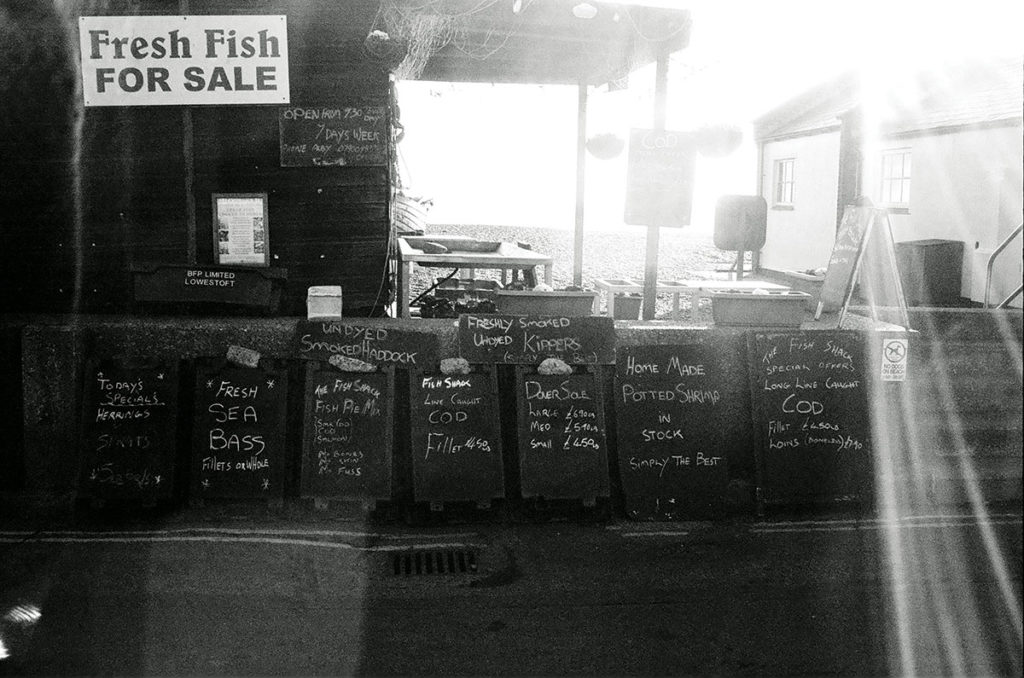 A drive down the coast reveals setups cleaning up in the afternoon sunshine, there are waves and surfers everywhere. By nightfall I’m a little further south. I contemplate meeting friends and staying inside a house or a B and B, but it’s not needed with an Arctic sleeping bag. I park the car up next to a wall and climb into the sleeping bag, staring up at the stars until eventually I slip off to sleep.

At 5am I’m ready to get in, it’s cold and dark, but I suspect a classic North Sea day is about to unfold. The reef is fun at dawn and there’s a crew from all over on it. Spotting charts is a thing of the past with forecasting websites, but the waves up here are not empty either, in fact it’s a solid local crew who are on it at first light and not itinerant pros or travelling surfers.

At 5am I’m ready to get in, it’s cold and dark, but I suspect a classic North Sea day is about to unfold

What is more they have the waves sussed and dominate the peak having the little takeoff zone to themselves for a while. They know what’s up, soon the wind will hit and it will be ripped apart. When the breeze does eventually pick up, I decide to get out, freezing cold in my 4/3. There are still plenty of waves coming through, but I’m keen for a wave on my own before the swell totally disappears.

One thing about the North Sea, swells rise quick and disappear even quicker so you’ve got to take your chances and seize the moment to get a wave at the optimum time. I do just that on my own at a fun left sand bar. The swell lines still pour though, but with diminishing power and size.

Before long the murk descends and I’m out, changed, and in the car heading back south in no time. After two fun swells in one week the goose chase is over. So now it’s back to swell watching, hoping a low stalls in that little gap that gives Norfolk a chance.

This article originally featured in issue 213 of Wavelength Magazine. Click here to subscribe to our print issue.