Emergency On Planet Shred "If you surf, you need to lend your voice”

Surfing and environmentalism seem like natural bedfellows, and always have.

Being immersed in the beauty of the marine environment when going for a surf is what makes up the majority of the experience – much more so than the actual act of riding waves – for many people.

But if there’s been a worrying trend across society, mirrored in the surf community in the 21st century, it’s the notion that saving the planet requires making a purchase of some kind. A reusable coffee cup or water bottle, boardshorts made from plastic bottles, etc, etc.

While these things should all be preferable options to throw away alternatives, none of them will save the planet as such.

In particular, the attention paid to the plastic problem, which is a huge problem, has nevertheless lead some to claim we’re getting complacent about some of the bigger issues, that we’re sleepwalking towards disaster on climate collapse, on habitat loss and mass extinction.

If there is one big thing on our side these days though, it’s the relative ease of spreading the message almost instantaneously, via social media.

Here are some of the headlines affecting the environment and surfers locally and globally in February 2019, and what you can do to get involved, right now, today. 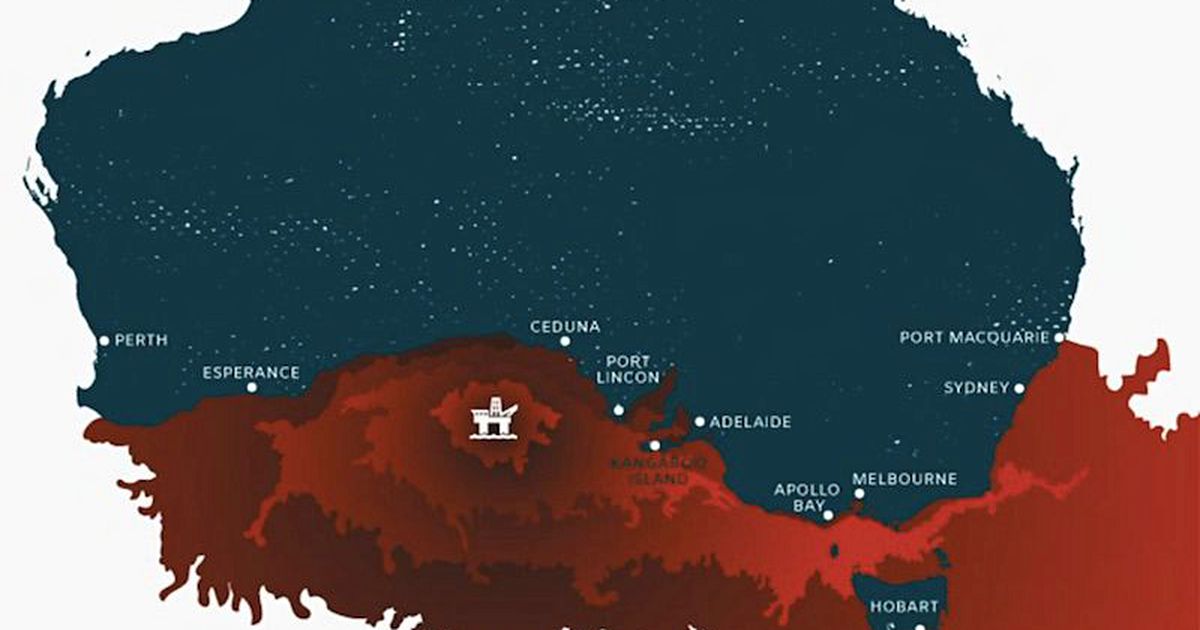 Potential spill affected areas from proposed drilling site. Some have claimed a spill in the Bight could be ‘twice as bad as Deepwater Horizon’.

In a mass mobilisation of the Australian surf community reminiscent of the backlash against France’s South Pacific nuke tests in the 90’s, an announcement this February by Norwegian oil company Equinor that they plan to start drilling 300km off the coast, 5km down  in the Great Australian Bight has seen a huge response from Australian surfers and media, in part lead by veteran surf journo Sean Doherty.

“We’ve got 30 days to stop this and if you surf you need to lend your voice” said Doherty via his IG. An image taken from Equinor’s own spill assessments, almost the entire Australian coast could be affected by a spill.

Equinor, (formerly Statoil) is two thirds owned by the Norwegian government, hence the appeal from Down Under for Scandinavian surfers to also voice their concerns.

Australia, which has the 2nd highest CO2 footprint per capita of any country in the world (after Saudi Arabia), has been developing coal mining and oil exploration in recent years to the dismay of environmentalists.

With a recent announcement by the Great Barrier Reef Marine Park Authority to approve the dumping of one million tonnes of dredging sludge from the Hay Point Port, home to one of the world’s largest coal loading facilities, the threats to coastal waters and marine ecosystems in Australia continue to grow.

What can you do? The closing date for public comment is 20/03/19. Submit an opinion here. 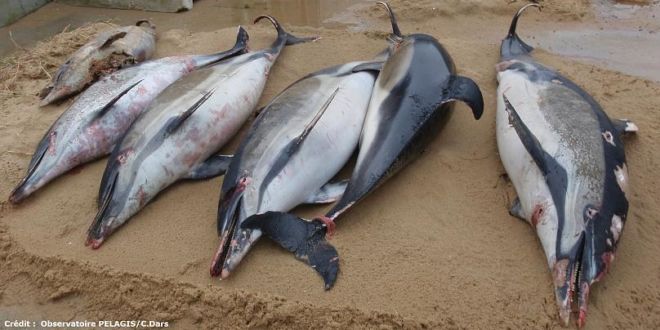 600 dead dolphins have washed up on beaches on the Biscay coast of France already in 2019, according to Sea Shepherd, “Most of the bodies found are mutilated, with severed fins, gaff hook marks, deep cuts, and broken rostrums consistent with capture in fishing gear.”

The environmental organisation commenced Operation Dolphin ByCatch with vessel M/Y Sam Simon in French waters monitoring fishing since 11th Feb. They estimate 80% of the dolphins killed by commercial fishing sink at sea, thus the total number of dolphins killed in the first few weeks of 2019 is close to 3000.

“Dolphins swim through the sea bass-spawning waters where many trawlers and seiners are fishing – which is already an aberration in itself – using techniques widely known to be deadly to marine mammals,” said Lamya Essemlali, President of Sea Shepherd France and director of its Operation Dolphin ByCatch campaign.

Non-selective fishing operations (including trawlers, Danish seiners, and gill netters) targeting sea bass and hake for the French market, as well as French and foreign vessels engaged in industrial fishing for surimi and fishmeal further offshore are responsible.

What can you do? Stop buying fish, for a start.

Get involved with Sea Shepherd 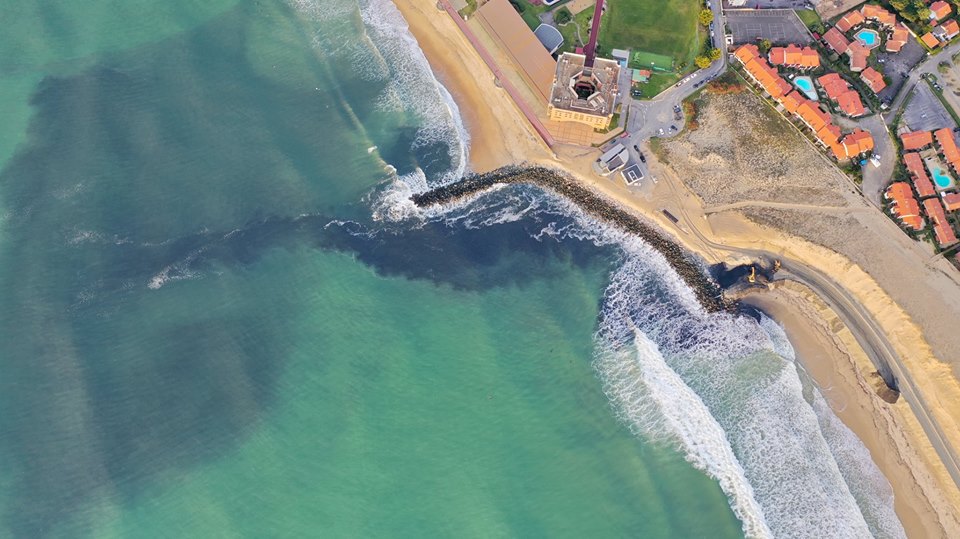 After a suspension of dredging activities in the Lac d’Hossegor due to a legal challenge over pollution from sediment by Sepanso and Friends of the Earth early in 2019, the dredging has since recommenced. Sediment from the lake is currently being pumped to the beach at Santocha (the beach that goes from the bunkers to the last jetty) and resulted in pretty rank looking dark brown waters outside the lineups of Santocha, Prévent and Centrale de Capbreton.

With this February’s school holidays coinciding with warm 20 deg plus weather and pumping surf, many surfers avoiding Capbreton altogether. The lac is estimated to be silting up to the tune of 20 000m3/year, and with the piping already in place from pumping sand from La Sud in Hossegor down to Capbreton, the sediment was seen as ideal for beach nourishment in Capbreton, which is pretty much disappearing (in the 1950’s, the bunkers were on top of the sand dunes).

“The actual concentrations of heavy metals like cadmium, chrome, mercury, nickel, zinc, lead, and PAH’s along with various other nasties in the sediments are the subject of much debate”

The prevailing N to S flow should take the sediment taken down the coast and offshore, but long period W swell has reversed the flow, meaning the town’s beaches blanketed and surf schools cancelling lessons. The actual concentrations of heavy metals like cadmium, chrome, mercury, nickel, zinc, lead, and PAH’s along with various other nasties in the sediments being churned up by the dredging are the subject of much debate, depending on whom you ask. In a colourful exchange of views on FB, Pierre Froustey president of MACS (responsible for pubic works) called those opposing the dredging “ayatollahs of environmental extremism.”

WSL Teams Up With Surfrider Against Trump’s Drilling Plans

In a relatively rare overtly political move, the World Surf League has recently joined Surfrider Foundation in campaigning against the Trump administrations recent moves to open up 90% of the American continental shelf to new oil drilling.

Having announced plans to overturn the Obama Administration’s restrictions on offshore gas and oil exploration, the US government now plans to expand offshore drilling in the Atlantic, Pacific, Gulf of Mexico and Arctic Ocean.

According to the Surfrider Foundation, “This drastic proposal opens over 90% of the Outer Continental Shelf to new drilling and puts our nation’s coastal communities, beaches, surf breaks and marine ecosystems at risk of a catastrophic oil spill.”

Furthermore, a freedom of information request by the website Politico has discovered that the US Interior Department has given offshore oil drillers nearly “1,700 exemptions to Obama-era safety rules put in place after BP’s 2010 Gulf of Mexico oil disaster, effectively gutting parts of the regulation before the Trump administration officially rolls them back. The most common waivers were those that allowed the companies to sidestep tighter rules for blowout preventers — the device that failed to seal off BP’s well after it erupted in 2010, killing 10 workers and spewing more than 200 million gallons of oil into the Gulf over five months.”

Get involved with Surfrider Foundation