Home » Egg On Face: Meet The English Duo Behind Surf Comedy ‘The Outrider’

Egg On Face: Meet The English Duo Behind Surf Comedy ‘The Outrider’

“It doesn’t bloody work! Forty years ago yeah, it was something new. Then something better came along. That’s how design works.”

So says an exasperated Mike Strident, the former world no. 2 and shaper of an era-defining single-fin model called “The Outrider”. Strident, like design, has moved on: “You’re a tennis player and still playing with a wooden racket,” he tells Tommy Tonata, a nostalgia-smitten, single-fin-riding Californian who’s made a career out of peddling a ‘70s aesthetic. “Please,” says Strident, “let me make you a board that works.” But Tommy doesn’t want to hear it.

This is the premise of “The Outrider”, the latest mockumentary from English filmmakers Jeremy Joyce and Rob Lockyear of Two Eyes Film, whose previous previous shorts include “The Shaper”, “#vanlife”, and “Freezing”. It’s another deft skewering of surf culture, and a typically mischievous exploration of the vexed issues of hipsterism and surfboard design. Watch below, then scroll down for our chat with the boys.

WL: Single-fins, flares, and – to quote the film’s protagonist, Mike Strident – getting girls to blow coke up your arsehole: were the ’70s a happier time for surfers all-round?

Jeremy: Single fins? Big hair? Short shorts? Outrageous moustaches? Who wouldn’t be happier?? Mike was in his heyday in the 70’s and it went downhill from there. Rob wrote the line about blowing coke up your arsehole; to be honest I’m not sure where that came from. I think Rob revealed something about himself there – but hey, each to their own… Rob?

Rob: I just liked the vision of excess. You’ve got to be more frugal in these times of austerity. 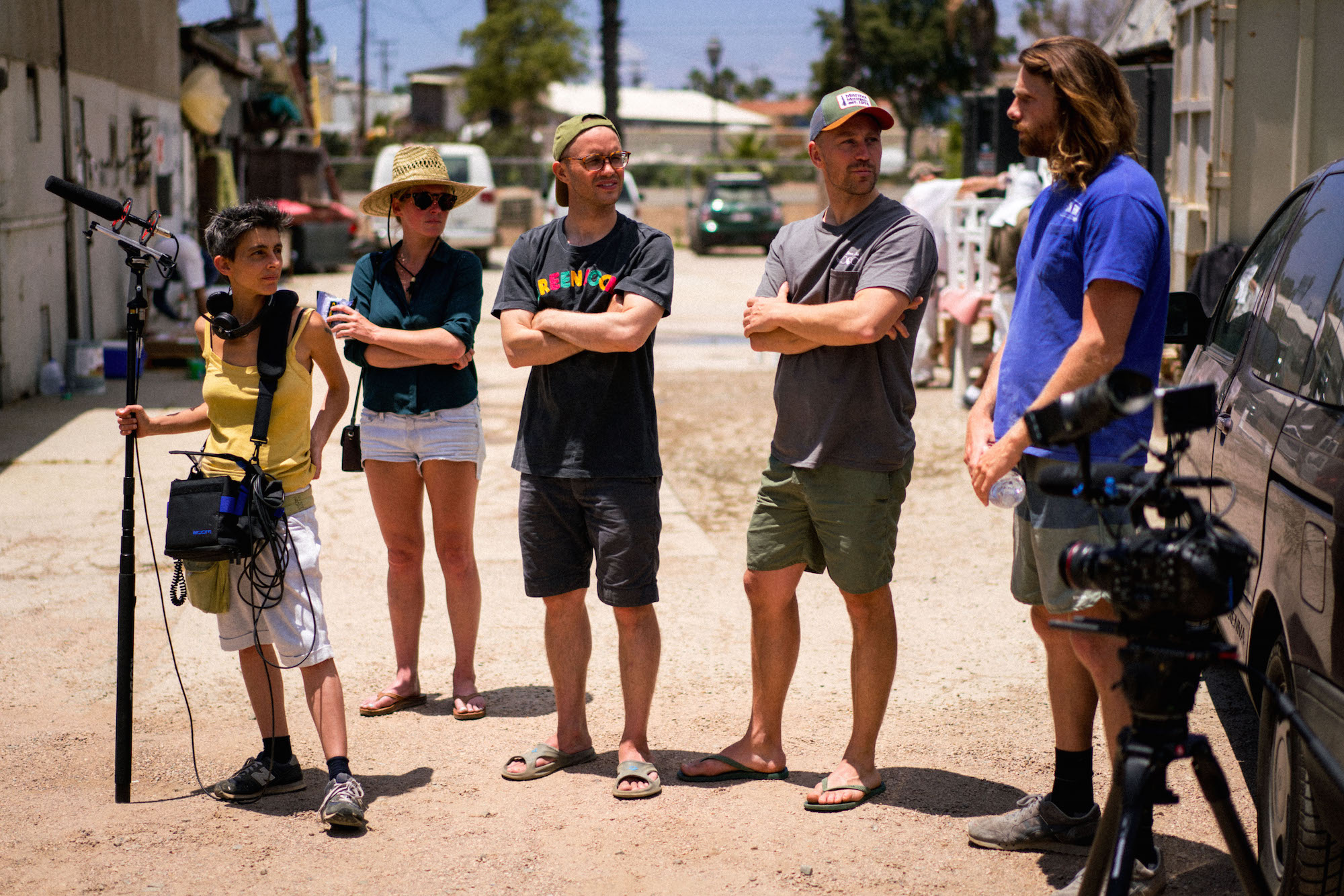 You obviously mock the single-fin-riding hipster community, but the film remains kinda non-committal in the retro board vs thruster debate that rages between Strident and Tommy. I wonder what your real views are on retro equipment and the people riding them, and what kind of boards you tend to ride yourselves.

Rob: Yet another thing we can’t agree on. I remember Jeremy buying a ridiculously thin, potato-chip thruster (Atlantico) off a pro in Seignosse in the late ’90s. It took me way too many years to realise those boards weren’t for me. I loved Thomas Campbell’s movies like Sprout and The Seedling. I bought a Takayama Model T in WA in the early ’00s and smashed the windscreen of my rental car when I shut the boot. I was so into that vibe I even shaped my own egg with a ridiculously deep vee and a huge raked fin. You actually could jam it on the rail! I didn’t glass the fin on straight so it hummed as you went down the line until it just snapped off. Jeremy is definitely more athletic (he’ll love reading that) and tends to ride more performancey boards (he’ll love that too). “The Outrider” was shaped by Ryan Lovelace in his shaping bay in Santa Barabara – he’s a pretty big dude but we squeezed him into Tommy’s costume to make all the shaping look legit. It’s a 7’2″ tri-plane hull and a thing of beauty. So we mock ourselves – actually it’s just me isn’t it?

Jeremy: Thanks for calling me athletic Rob! 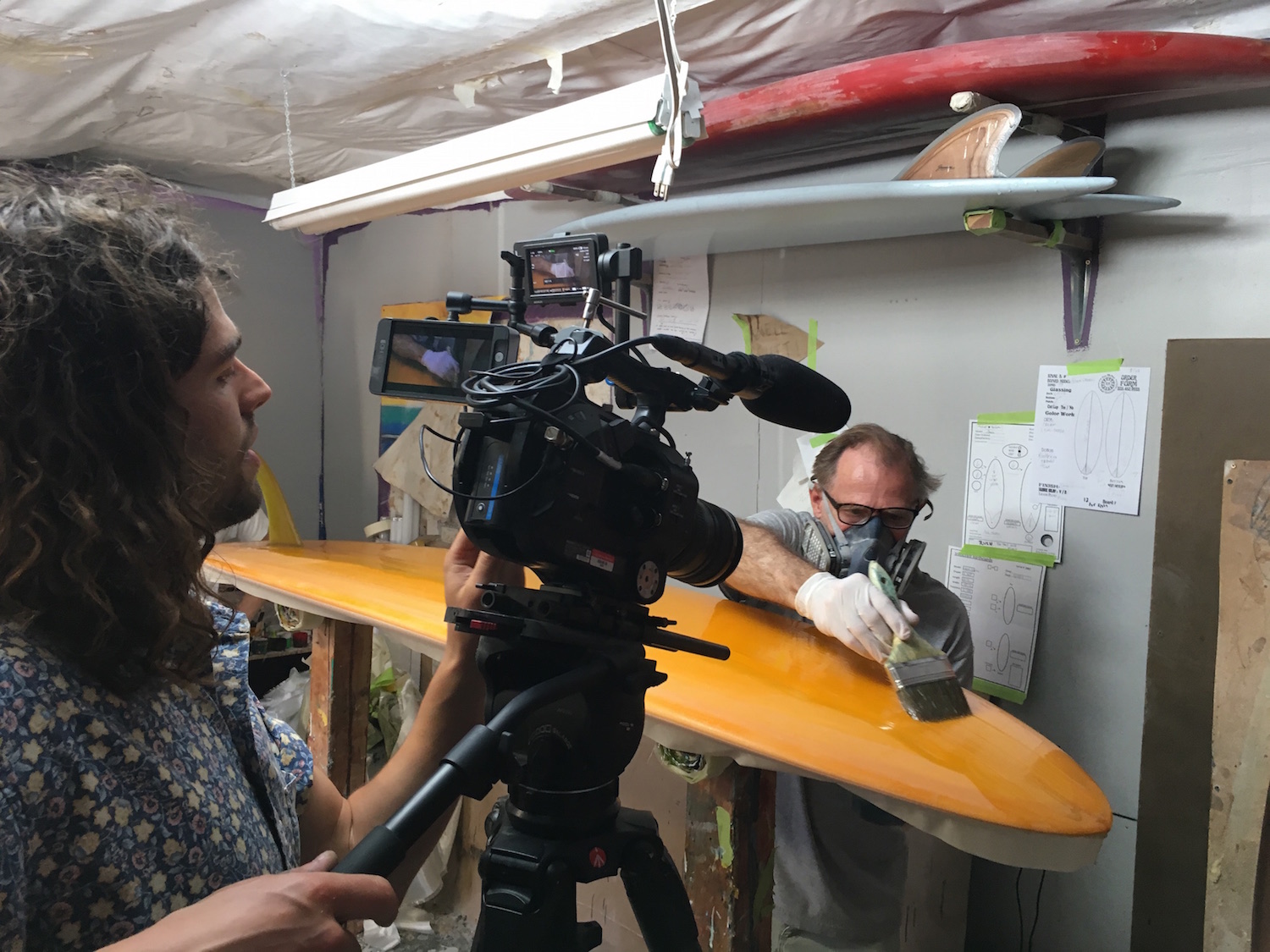 Mike Strident is played by Danny Webb, whose film and TV credits include Alien 3 and Doctor Who. Photo: Two Eyes Film

Strident, who finished 2nd in the world in the ’70s, is an Englishman, judging by his accent. Did you invent a backstory for him?

Jeremy: Yeah we had a backstory for Mike, although we felt OK not explaining it in the film. Mike was from a military family that moved around a lot – he relocated to the North Shore in his early-teens. His outsider status motivated him to prove himself in big surf and he rose through the ranks quickly, establishing himself as an oddball charger and innovator. Our first thought was to cast an American actor but when we met Danny Webb, who plays Mike, we knew immediately that he should be Mike. Aside from being an amazing actor, Danny is a surfer and happens to be a big hull / single-fin geek – so it fell into place nicely. Also, we kind of like the idea of a Brit placing second on the world tour…

Liam Gallagher apparently believed Spinal Tap were a real band. Have you encountered anybody who’s taken the satire of “The Outrider” at face value? Would you consider that a kind of validation?

Rob: It’s the best feeling in the world. After “The Shaper” we got an email from someone asking if he could order a “Wavefucker” – we are still unsure if it was really, really deadpan, parody feedback. Genius if it was but pretty sure it was genuine. We love screening our films in cinemas with hundreds of people watching – you can feel the change in the audience as they realise something is up. Jeff Divine (legendary surf photographer) let us use his iconic pictures of Simon Anderson’s thruster for the film and he said “Wow! Close to the bone. I know shapers that fit that profile exactly” – when someone gets nervous we know we are in the right place. 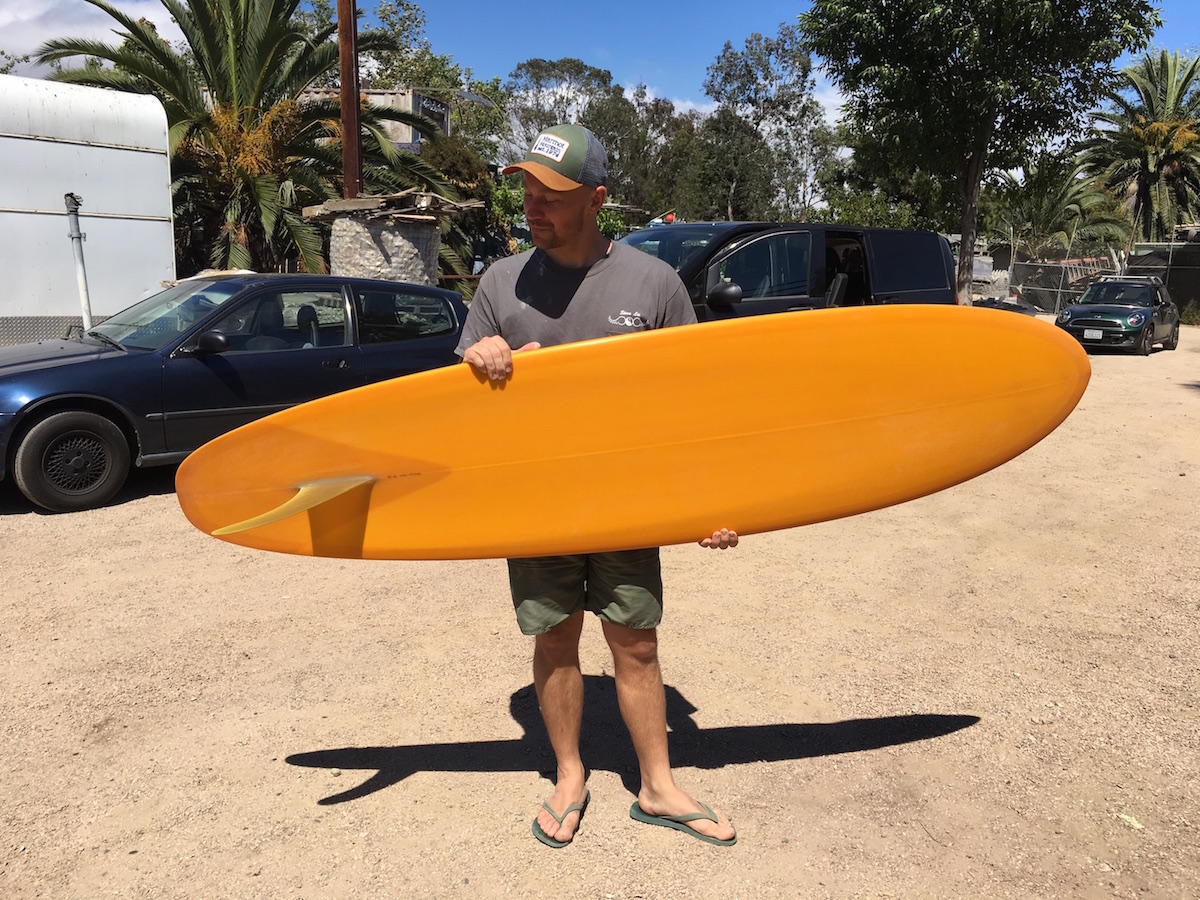 Did you do most of the filming in California?

Jeremy: We did all the filming in Southern California. We had an Airbnb base in Oceanside so we shot lots around there and we did a couple of nights up in Santa Barbara, too. It was amazing to go for early morning surfs before shooting each day and we had the whole cast and crew staying together so it was really fun. We were supposed to head across the border into Mexico to shoot the acid trip scene but we didn’t have time, so we found a tiny back road near Rincon Point, made a little campfire and prayed that the cops wouldn’t show up during filming!

We were amazed by how generous people were when we were out in California. We got all of the locations for free in the end – I think it was the quaint British accents and also a general air of desperation that swung it. Surfer Magazine Photo Editor Grant Ellis very kindly let us turn his house into Tommy Tonata’s pad, Jacob Ells from Jive Surfboards lent us his amazing VW van (which we were terrified of breaking), Chemistry Surfboards gave us a board to use as “The Ocelot”, and Surfer Magazine HQ let us use their studio for the opening scene. As well as that, Bird (from Bird’s Board Shed in San Diego) basically let us have a free run at his huge vintage board collection – so we got to surf some classic boards when we were making the film. It was my first time in California since I was 2yrs old so it was an exciting shoot!

How big an operation was the whole thing, and what sort of equipment were you using?

Rob: We like to keep it really small. Our crew was Jeremy and me as writer/directors, Ben Cox on camera, Marina Fusella on sound, and Christine Cangelosi helping with the production design. Working really closely with the actors and giving them loads of freedom to bring themselves to the part is something we both love. We shoot most things guerilla and improvise a lot so it just wouldn’t work with a big crew – we have to be agile and ready to run from the cops! We shot on a single camera (Sony FS7) except for the water stuff which was a Sony A7s in a $150 dollar water housing we got on Amazon Prime while we were out there. Ben had never shot in water before and did an incredible job. Marina is a really experienced sound op and is also tiny so was handy for squeezing into shaping bays and rickety old vans.

What’s the money like in surf mockumentaries? How did you fund “The Outrider”, and what do you do when you’re not mockumenting surf culture?

Jeremy: We thought by now we would have earned enough cash from film-making to buy houses by the sea – but instead we have earned about enough money to buy a bag of Doritos each. We were pretty fortunate, though, to have a great sponsor in Allpress Espresso who backed us to make “The Outrider”. They’ve helped us out for our last four short films and without them we really couldn’t have made anything. We also did a Kickstarter campaign to fund this film and we were really grateful to all of those backers. When we’re not Mockumenting (you’ve coined a new verb there!) I am working in photo and film production in Tokyo – and Rob is Design Creative Lead at Allpress in New Zealand. We deliberately live miles apart so we don’t have to see each other very often. But yeah – unless we are missing something there’s not a whole lot of cash to be made in independent film-making. We’re hoping to make something next where we can pay our team properly and be able to afford better catering than just In-and-Out Burgers.

You’ve poked fun at cold-water surf trippers, pretentious shapers, middle-aged weekend warriors, people who live in vans, and now nostalgic hipsters… whose next on your list of targets?

Rob: This is the question! The Outrider is a stand-alone movie but it’s also one episode of an 8 part series we have written called “Inside the Ride”. Each episode follows a different character – a 90’s burn-out and hotdog addict who’s coming back on tour (again) at 46, a former pro who set’s up an organic commune on a surf-starved island off Norway but finds out it doesn’t get surf, a Byronshire free-surf couple who are living their best lives but are also pyschopaths, a young female rookie fighting to stay on tour while being sexualised by her sponsors (we are desperate get some women in our films!) – the list is long. Our dream is to build a whole world of characters whose lives and stories overlap and intersect – we’ve got to the point where we know how we work and we have a crew that can get it done. We just need someone to back us and give us a shot. Anyone? Hello?