Home » Everything You’re Dying To Know About The Brand New Bristol Wave Pool!

Everything You’re Dying To Know About The Brand New Bristol Wave Pool! All your questions answered: How many different types of wave are there? How big are they? And can I get barrelled? How shallow is it? How cold is the water? What's the capacity? How many waves will I get in an hour? And more...

Today, after ten years of hype and preparations, the Wave Bristol finally opened to the public.

We went down there to see what was what, capture some footage of the assembled crew of British and Irish rippers, and try and find out the answers to all your burning questions.

Let’s dive straight into the details then shall we? 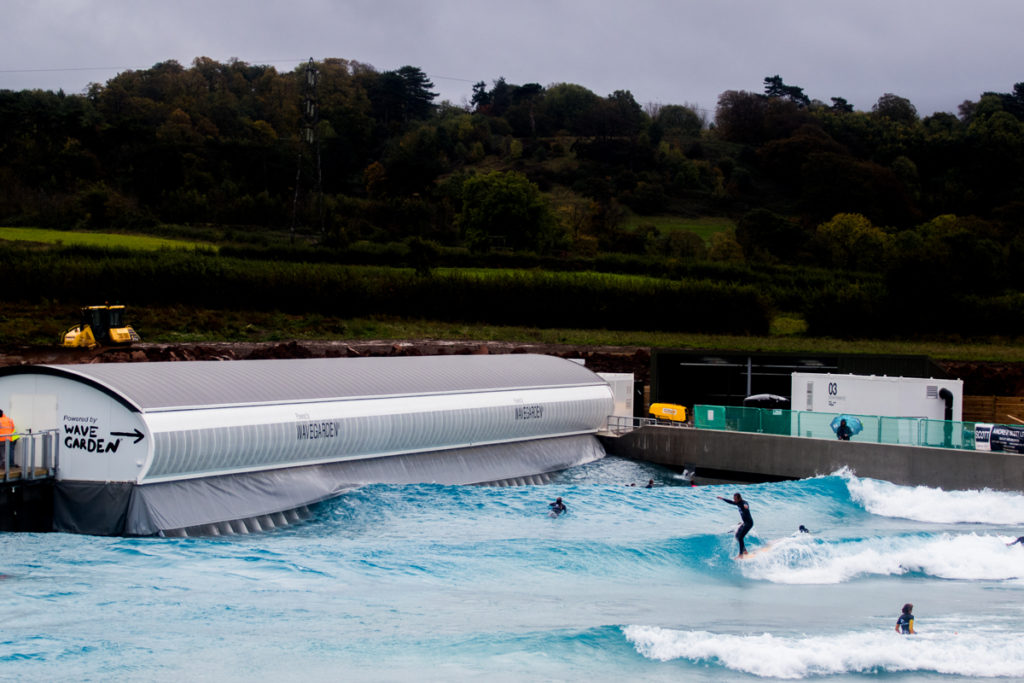 Bearman hanging 10 on the inside.

How many different types of wave are there? How big are they? And can I get barrelled?

While The Wave is apparently capable of a huge variety of shapes and sizes, including long tapering walls, square tubes and air-friendly end sections, there are currently 15 different finalised wave presets. Right now, however, only one category- containing 3 different sized waves- has been risk assessed and is available to be surfed by punters.

While there was a lot of talk today about the ‘grande’, ‘tube’ and ‘beast’ modes (each with their various different increments) all the surfing took place on waves in the signed-off ‘Malibu’ category, to give you an accurate idea of what you can expect from a visit.

To confuse matters a little, all of the bigger, more hollow waves you see in photos, like the header image above, and the footage below, were captured during the testing phase of some of the more serious, but currently out of bounds settings, which means you won’t be surfing waves that look like them in Bristol for the foreseeable future.


Think of it like the menu of a brand new restaurant, one of The Wave staff told me, where more new dishes (wave types and sizes in this case, obviously) are added as time goes on.

While they don’t throw up 4 foot kegs, there’s no doubt the ‘Malibu’ setting waves currently on offer are super fun. Each of the three stages offers up an incremental increase in size, starting at around thigh high and culminating in punchy chest high bowls. You start your session with the smallest setting to get a feel, before graduating through the levels. In each increment, the shape of the waves- both right and lefts- and the way they run along the reef remains largely the same; an easy take-off, followed by a soft cutback section, which sets you up for a nicely paced wall that bowls up and runs all the way to the inside.

The answer then, to the much-asked question: ‘can you get barrelled at The Wave Bristol?’ is yes; but not on the waves currently available to punters. If you’re small and the wind is howling offshore you might score a little head dip on the Malibu setting, but nothing like what you see in the shot up there in the cover slot.

Exactly how big it will go remains to be seen, but for now, base your judgement of what you’ll be surfing on the images in this post. 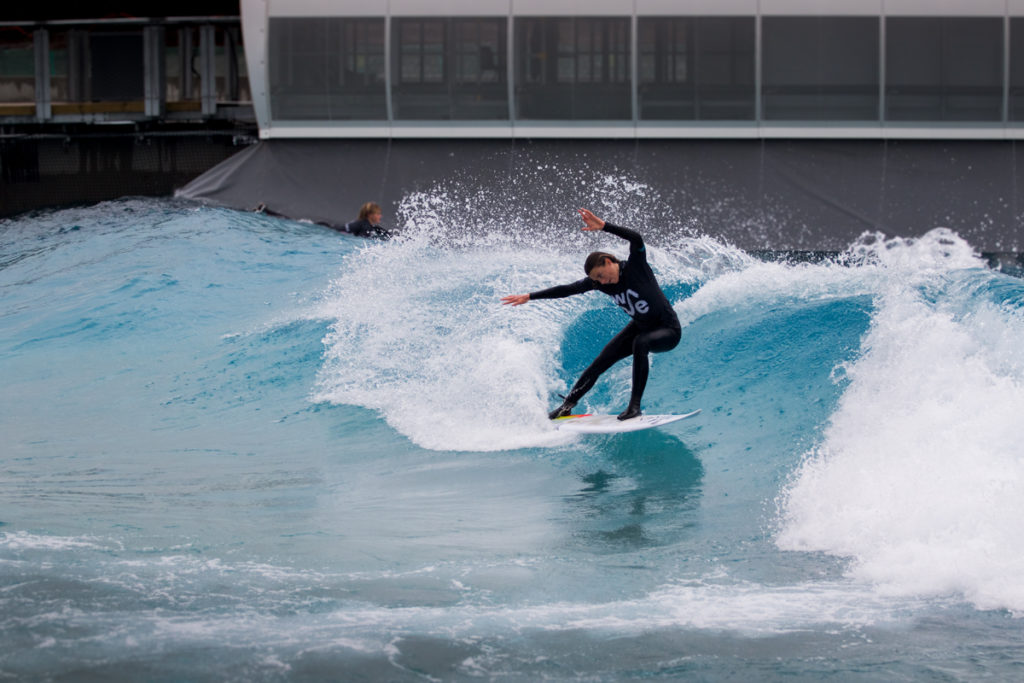 Lucy Campbell laying it on rail on the right.

How shallow is it?

It’s pretty shallow! About knee deep where the wave breaks, however it doesn’t feel at all dangerous, as there’s always a nice white water cushion to land on and the instructors advise you on the best form of dismount.

How cold is the water?

At the moment it’s around 13 degrees C- so most people are in a 4/3 and boots. It will no doubt get into 5/4 territory as we enter the depths of winter. 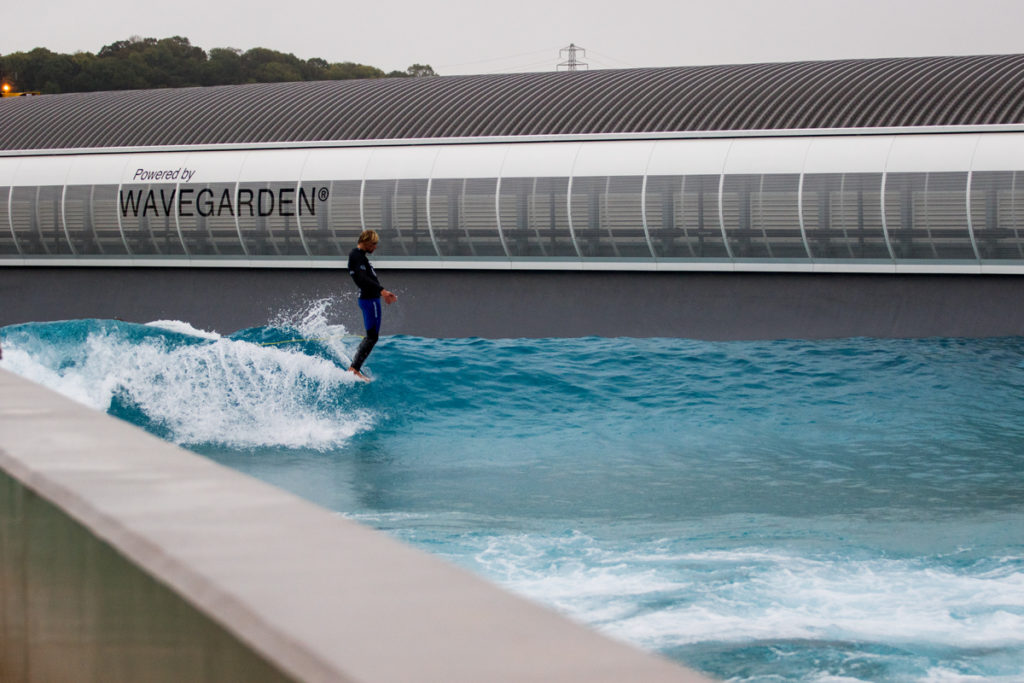 Jordan Zervas on the nose, straight off the take-off on the left.

How many people are in the pool, on each side, at one time?

There can be a maximum of 35 surfers on each side of the pool, split between three take-off areas; the advanced peak, the intermediate peak and the beginner peak (which is the whitewash).

However, you’ll only be sharing the ‘advanced peak’ (which is where you’ll be surfing if you can go down the line on an unbroken wave) with a maximum of 14 others. 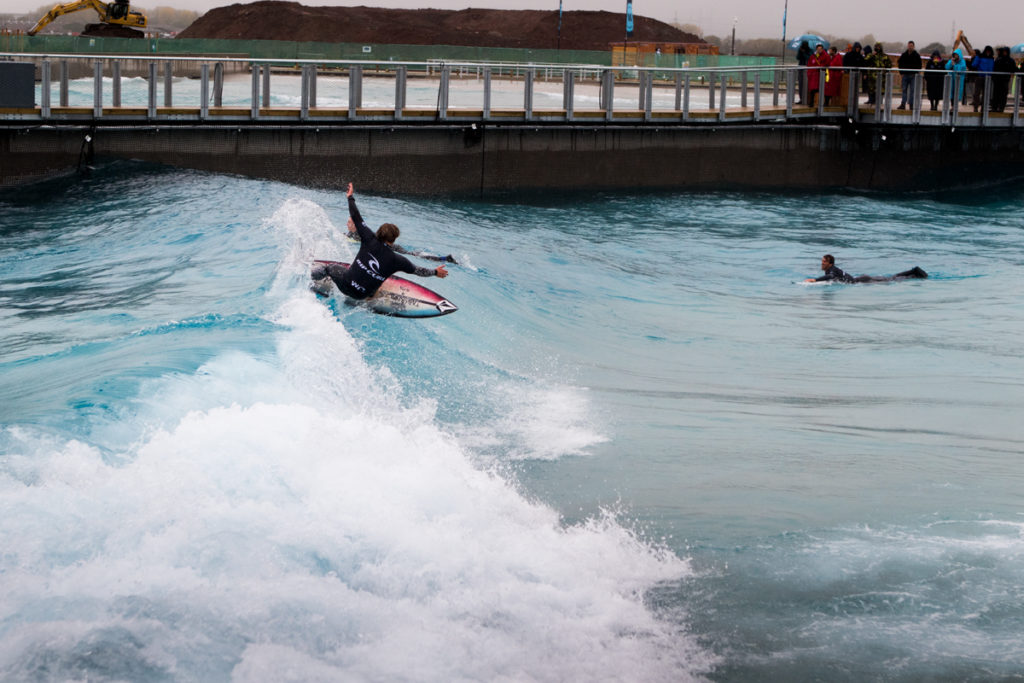 Harry Timson off the lip on the left.

How many waves will I catch in an hour and what does this work out at in terms of cost per wave?

This is a difficult one to answer for a number of reasons. Firstly, it depends on how many people are in your session. Numbers can vary wildly and one member of staff told me there are still lots of quiet, mid-week session slots up for grabs where you wouldn’t be sharing with many people at all. It also depends on how many waves you catch per set- which is determined by how quickly you paddle back to the peak after your wave and how far through the set you caught your first wave, how many waves in a set they’re running and how long they wait in between sets to let the water settle. 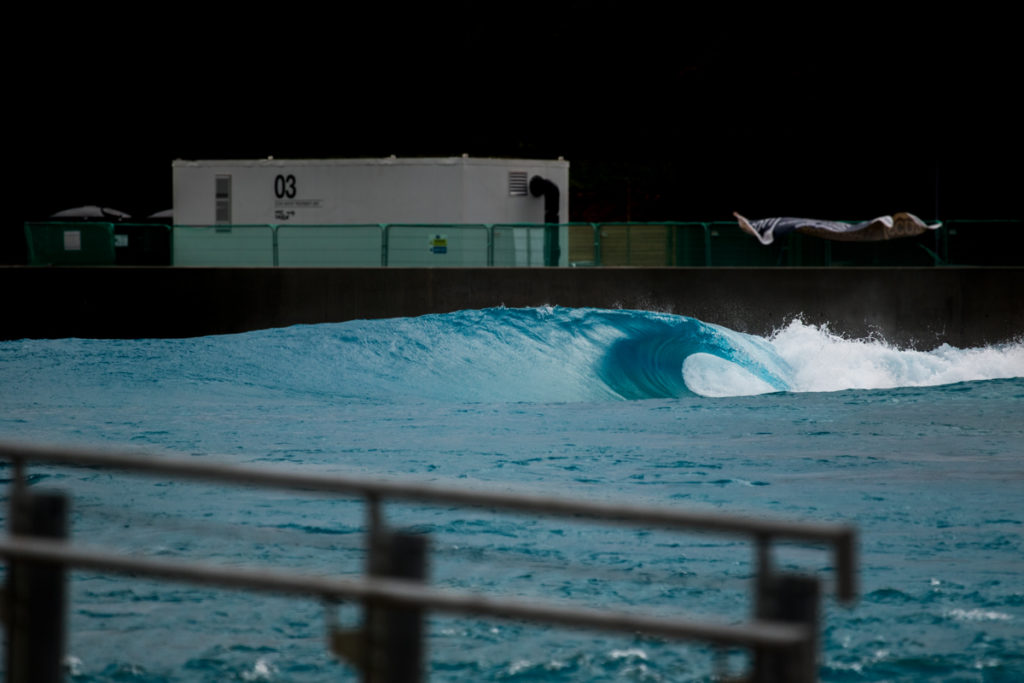 The team in the booth show the assembled crowd what a little more power looks like.

Rest assured, while this seems like an important detail in the run-up to your surf, no one gets out of the pool exclaiming anything other “I’m knackered.” The pace is so fast, that even at max capacity you will have just caught your breath and spluttered a review of your last ride at your mate by the time your next wave is up. 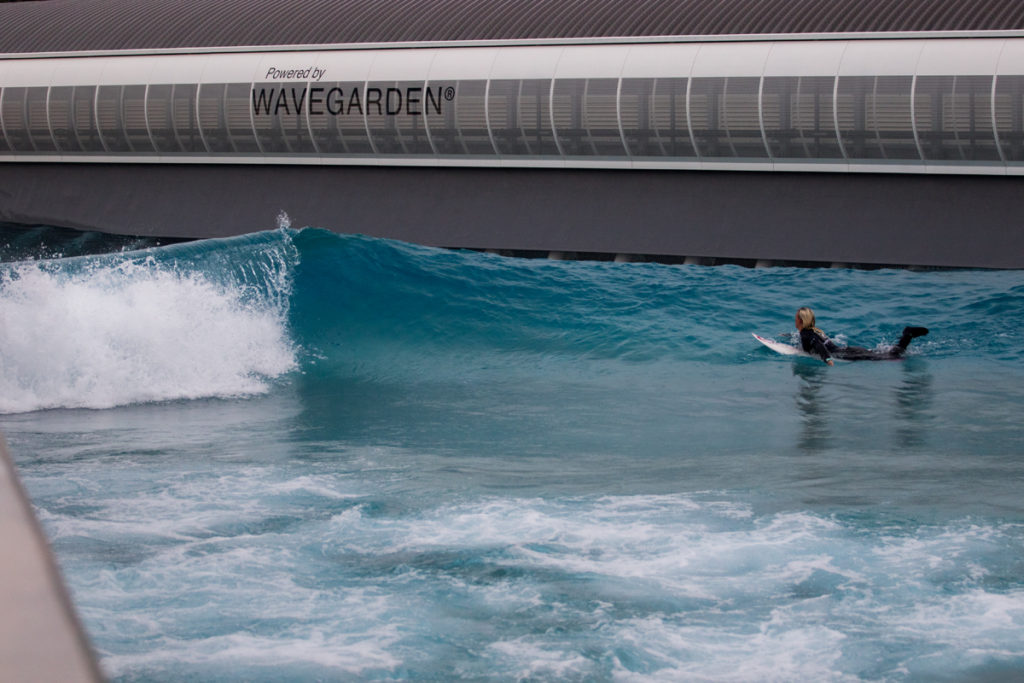 Ellie Turner paddles to the take of spot.

What happens if I miss my wave?

You get another go at the next one. If you miss that one too, you join the back of the queue. If the session isn’t at capacity, you’ll usually end up getting another wave from the same set (so about 40 seconds after your missed one). 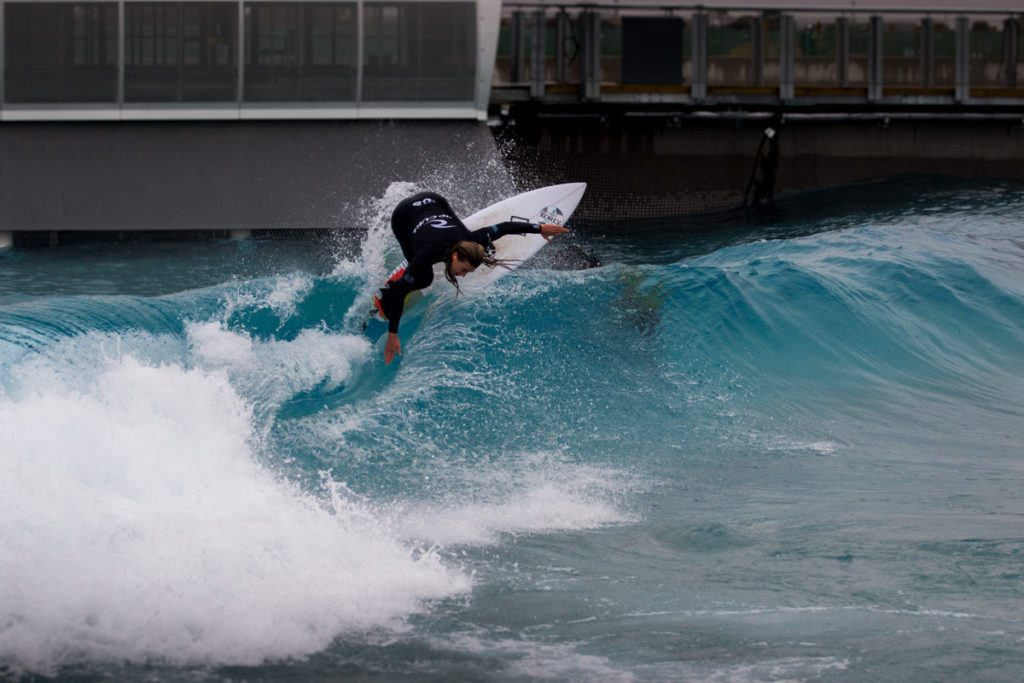 What board should I ride?

This depends completely on what you want to do out there. I surfed a 7’2 egg and pretty much went straight in the pocket, our filmer Ollie Treacher surfed his 5’7 toothpick, with a front deck grip, which he put on rail and whacked off the lip.

Over on the other side, Bearman and Skindog were nose riding on their nine-foot plus longboards. Bring the board you ride in 2-3 foot beachies and if it doesn’t feel right after the first half-hour, go and choose from the extensive free-to-borrow range that the Wave have in stock.

Reubyn Ash with a roundhouse on the inside.

If you’ve got any more questions, pop them in the comments we’ll do our best to answer them, plus keep an eye out for an edit from today dropping tomorrow!