Fickle Frontiers: One Spring Session At A Heavy UK Slab

Oli Adams, Ben Skinner And Josh Ward set off in the hopes of scoring a super fickle slab, somewhere in the UK

As the boat circles into position on the inside of the reef, its long fingers jutting out from the large deserted headland which towers behind us, the first proper set of the day appears on the horizon.

The boat driver’s glance flicks nervously towards the ribs engine, as it rasps and splutters, sending plumes of grey smoke into the inky morning sky. ‘If the motor cuts out and I shout paddle, grab one of those’ he told us, pointing to three oars in the back of the boat.

About 20 feet away Oli Adams, Ben Skinner, Josh Ward and three local guys began to scratch over the first wave of the set, mindful of the advice offered by Josh Cleaver, one of said locals, before they paddled out. “The first one will look really inviting” he’d explained “but it will put you right into the impact zone for the rest of the set. I’ve seen boards tombstone for 100 meters down the reef dragging the guy attached to them along the bottom as they go”. 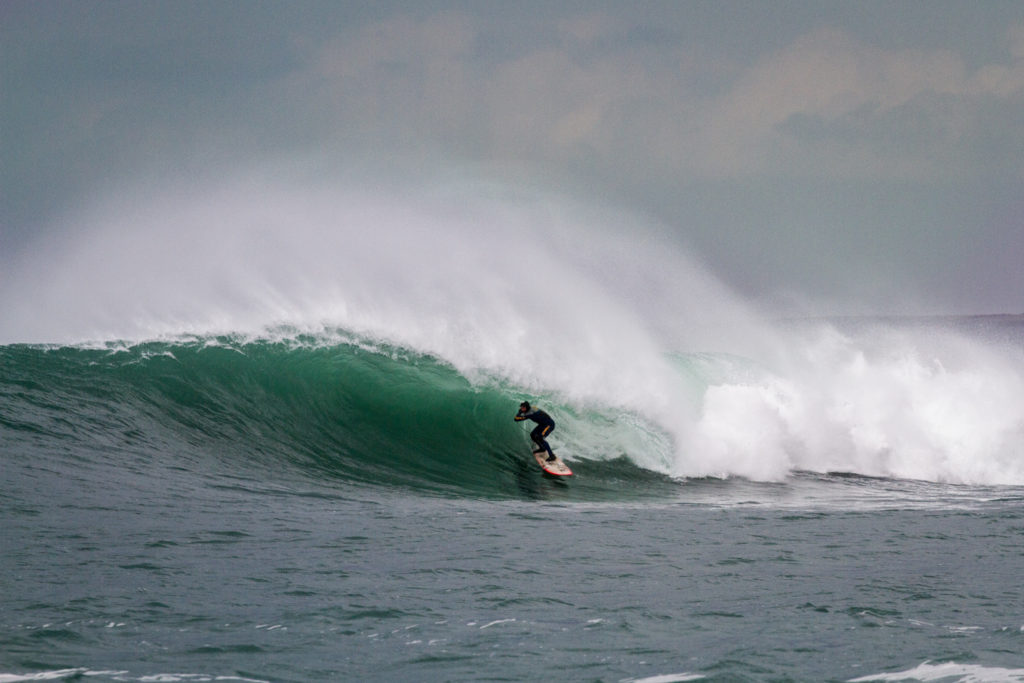 Ben Skinner on the first set wave of the day. Photo Luke Gartside

As the first wave began to break wide of the pack, the engine roared to life, thankfully rendering the drivers precautionary words redundant, at least for the meantime, as it raced up and over the oncoming wall. Just as we made it over Skindog took off on the one behind, making the vertical drop, before man handling all 9 foot of his board up into the pocket, stalling for a second and disappearing behind the curtain.

‘Its ingrained in my head the wave that you caught’ Oli tells Ben later, ‘I remember it so well, I knew when I saw that it was good one, and then you came flying out down the line with that look your face.’ After that, we knew it was going to be a good day.

Oli had been keeping an eye on the chart with a view to scoring this wave for years, but the decision to finally put the trip together now was not an easy one. As many of you may have read online, he had recently undergone surgery that saw his core sliced open and part of one of his major organs removed. This trip would be his first venture back into waves of consequence. Such an operation would see most people, in line with the doctors advice, taking it easy and not, after just three months recovery, throwing themselves over the ledge into overhead slabs breaking into waist deep water.

‘If I’m honest I wasn’t really ready’ he said ‘but when we saw that chart the froth just got us, we had to go’. The first person he rang was Ben Skinner, who, having made several trips to the wave previously and failed to score it, was super keen. Ben said his immediate priority was getting safety provisions in place and so set about securing a boat, a jet ski and inviting along senior lifeguard and good mate Josh Ward. ‘Its a fucking heavy wave and its in the middle of nowhere and so with Oli not quite being at the top of his game yet we just had to be safe and ready for everything,’ Ben recounted. 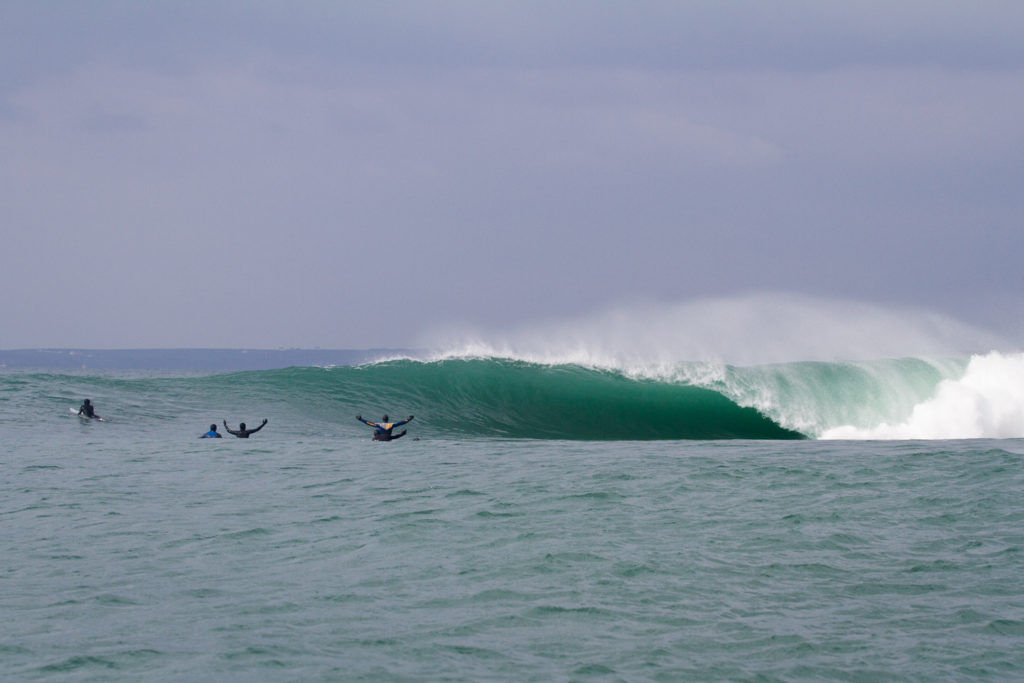 The pack salute a perfect one as it rolls through. Photo Luke Gartside

Once out there the boys set about trying to feel the wave out ‘its constantly moving around the reef and messing with your head’ commented Oli ‘and once you do get one its one of the hardest take offs into a barrel I’ve ever had’. The lack of crowd however eased the pressure and the vibe in the line up was really positive ‘I enjoyed hooking up with the local crew too’ mused Ben and Oli agreed, ‘it was a really good thing to see, that waves there and its so heavy, but theres a cool little crew there, just full underground charging it’.

‘They’re just walking out there, no boat no ski, long paddle, we really respected that’ added Ben. ‘And they were cool to us too’ continued Oli ‘it wasn’t like fuck this is our spot, what you doing coming out here with a jet ski, they were stoked to see what It was like to tow into it and that was really cool because in a lot of places you might get a bad vibe like that but they were stoked’. 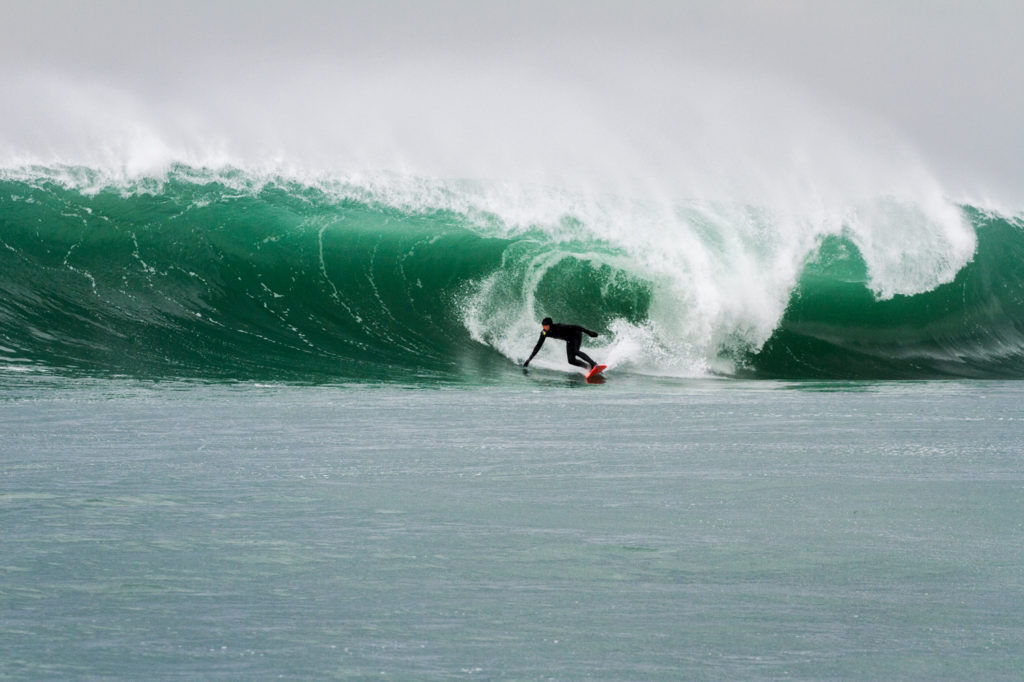 After a few hours of paddling in the swell was hitting the tidal sweet spot, and the boys decided to have a few goes in the straps. The sun was out and the waves were some of the most picturesque I’ve ever seen in the UK, jacking up as they hit the slab, lips hovering for a second illuminated turquoise by the afternoon sun, before folding over and exploding onto the shallow reef. Whilst Skindog whipped into a few runners, Oli felt as though he was holding back.

‘I was just a bit hesitant, in my situation’ he said ‘the doctor had advised me not to push it for the first year after the operation as I had to be careful of getting a hernia, and it had only been three months… I mean I got a few pretty sick ones, but not compared to what you could get out there’. Despite this however Oli’s take on the session was a largely positive one, as he told me that since coming back his performance surfing has felt much better and that the whole thing played an important role in building his confidence, ‘I got so hammered a few times out there, there was a few where I towed in and tried to pull into the slab and I just got a lip to the head and was pushed into the reef and got thrown into all sorts of positions, but my body was fine. Since then I’ve just felt much more psychologically ready to start really pushing my surfing again.’ 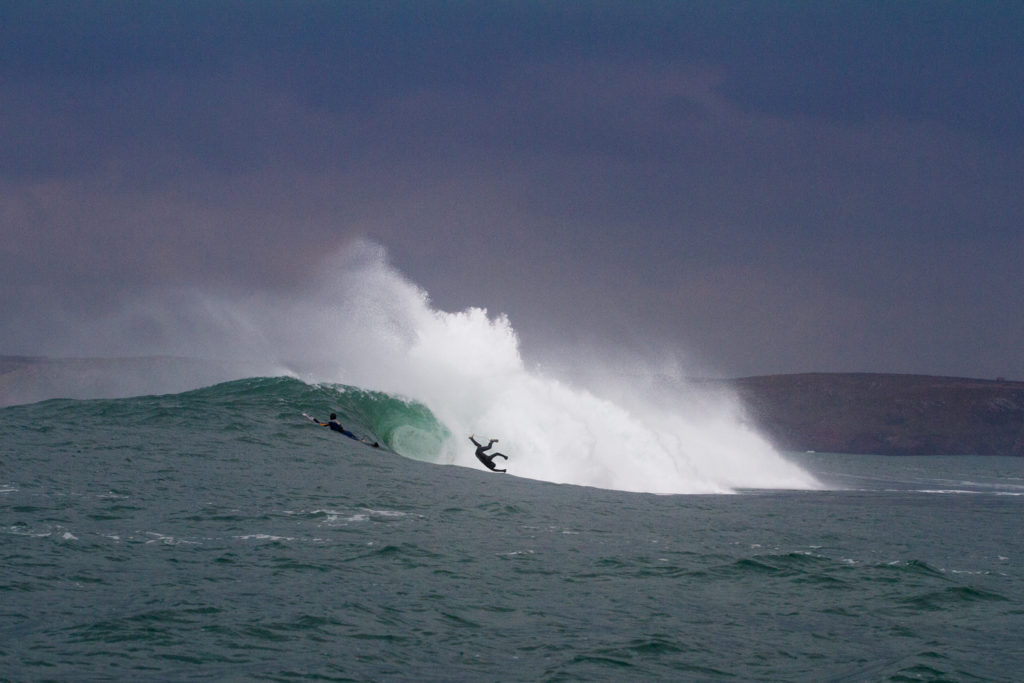 As the session drew to a close and we started to think about heading for shore, the driver announced that the engine had a problem and that the boat was stuck in reverse. Whilst grateful the issue had arisen whilst we were no longer within spitting distance of the impact zone, the news was not particularly welcome, as 6 hours of repeatedly circling into position, swaying in the Atlantic chop had taken its tole on me.

I sat, delirious with sea sickness, balled up in a few inches of water in the front of the boat in no fit state to be of any assistance at all. I remembered back to that first set of the day and wondered incoherently to myself if the time may have come to heed the drivers request and grab an oar each and get paddling.

Luckily filmer Timmy Boydell had not forgotten his sea legs, nor his knowledge of the inner workings of boat engines, gleaned through years of tinkering. He sprung into action and after tugging on some wires he managed to get the boat going back forward and we headed for the shore. 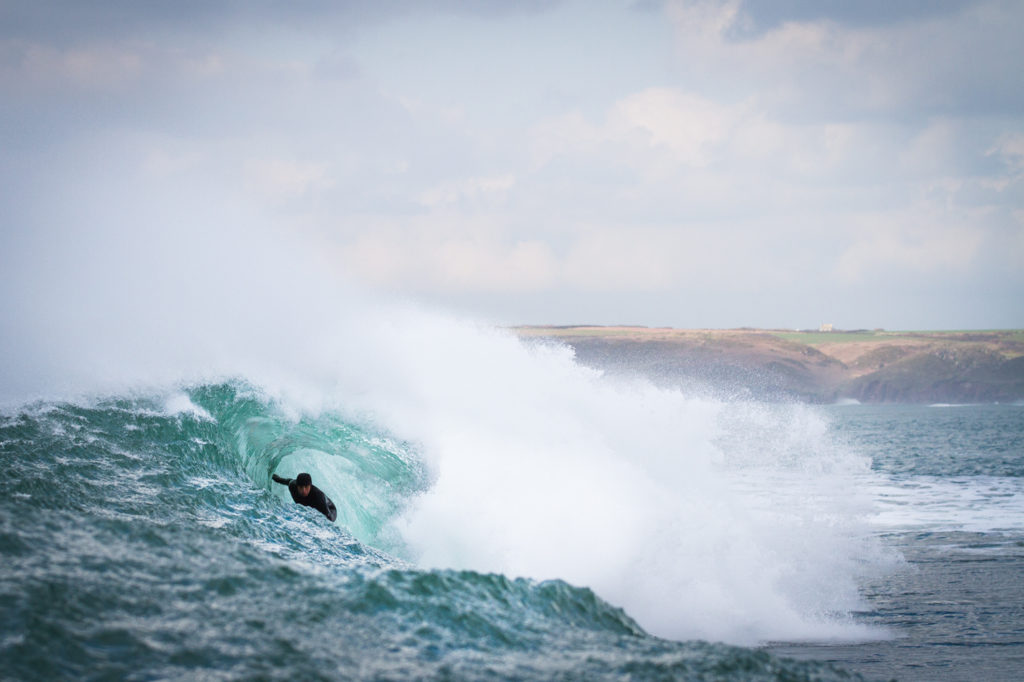 Oli Adams tucks into a runner on the inside. Photo Luke Gartside

With my feet back planted on dry land, flicking through the shots it struck me what an impressive show the boys had put on, with Oli’s clear determination not to let his op, or the medical apparatus it left permanently attached to his body hold him back and Ben and Josh’ eagerness to support and facilitate this important step of his recovery.

‘I feel like a whole new world has opened up’ said Oli when I asked him about his plans for the future ‘Ive got a lot of stuff in the pipeline and I’m just excited to get on with it and try and make it happen.’ ‘I want to win a world title’ replied Ben to the same question ‘but in that process, I want to just keep surfing with my mates, ‘cuz that day I was just frothing out and that’s what it’s about, I just genuinely love going on surf trips with the boys.’ 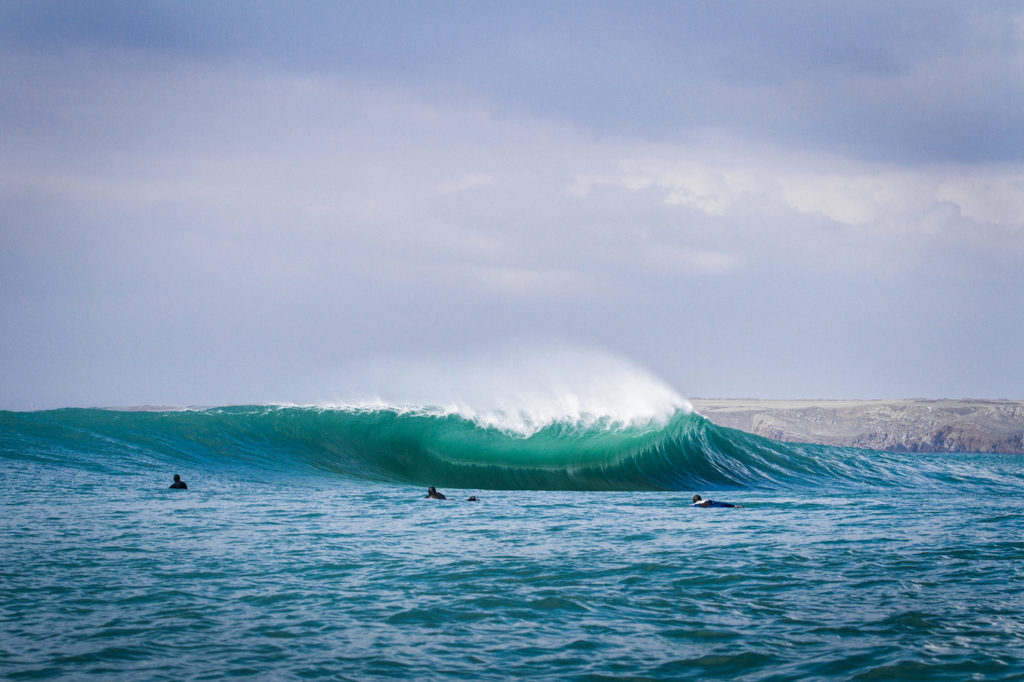