There aren’t many instances in an adult’s life where letting the imagination run away with you is advantageous, but this was one of them; standing on a beach on a remote British island, sand whipping at our backs, watching perfect ankle-high waves reel down the sandbar we had travelled 16 hours to find. 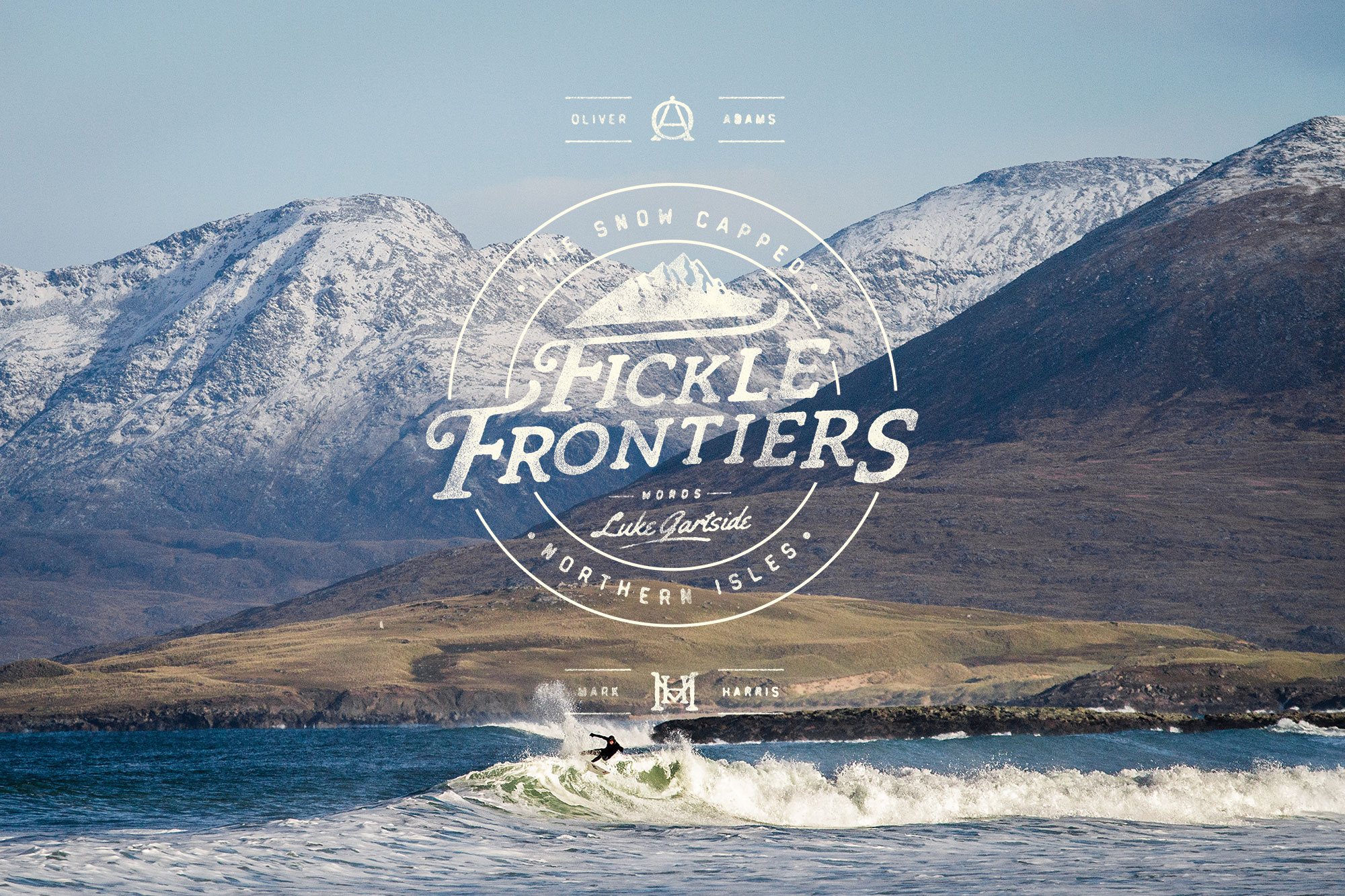 Search of the most promising of these peaks. As the tide moved and the wind grew calmer, a groomed set marched in, sending overhead,

Whilst the reality could easily give way to bitter disappointment, the image in our minds of what we could one day find here kept it firmly at bay.

Behind every great new discovery there are these recce missions, and I was riding along with two of the UK’s most prolific wave hunters – Oli Adams, and Mark ‘Egor’ Harris. The pair had spotted a swell a few days before and decided to scope out the potential of this particular set up, which they’d found on Google Earth.

Upon our return to our lodgings, we poured over a conveniently placed map on the wall, studiously working through the various possibilities offered by the coastlines of neighbouring islands. 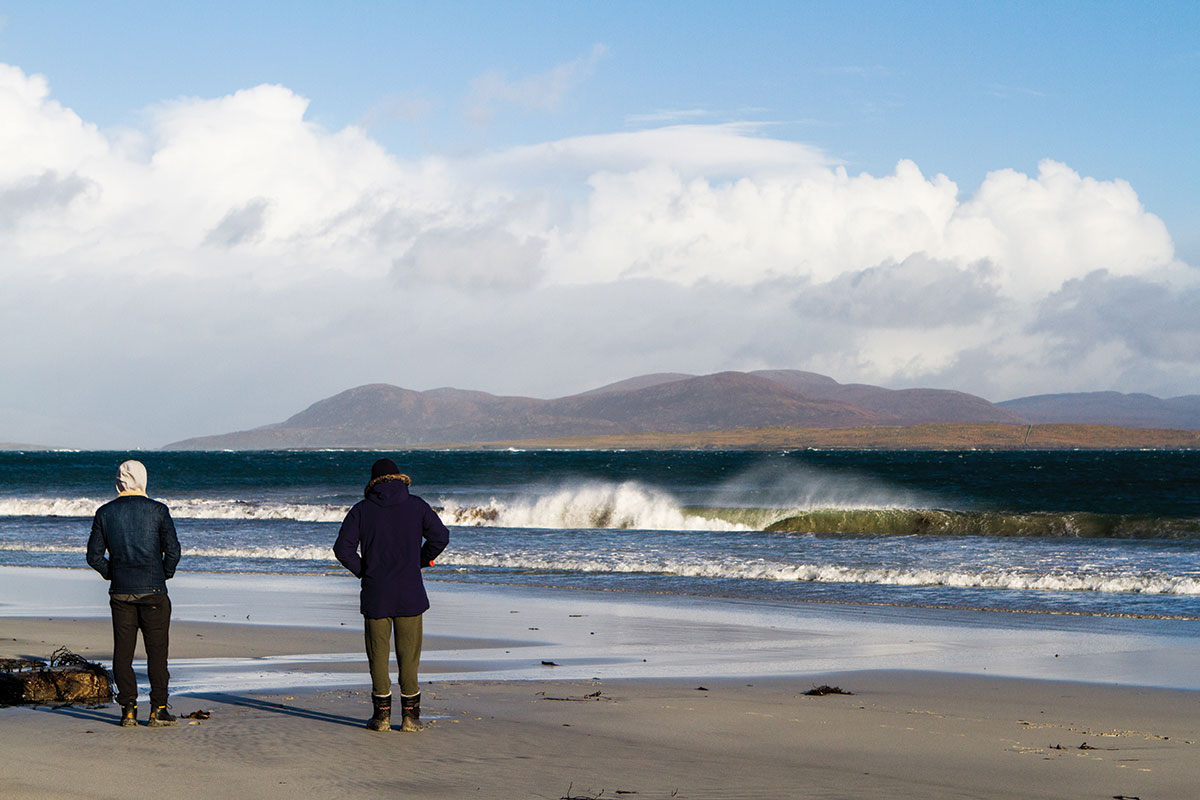 Oli and Egor seek solace in the potential as ankle high drainers reel off down the sandbar.

It didn’t take long to find a stretch that presented an optimistic outlook for the following day. We packed our things, readying ourselves for a turbulent ferry crossing.  It’s a common occurrence on these trips, explained Oli, that you won’t actually score the spot you’ve been looking at and obsessing over before your arrival, but there’s so much divergence in the British coastline that you can almost always find a consolation prize:

“We get close to 360 degrees of swell, and we don’t get trade winds, so the weather is completely changeable all the time. Every spot needs a specific chart, so searching here has almost endless possibilities, and you know you’ll never even get close to scoring every spot.” 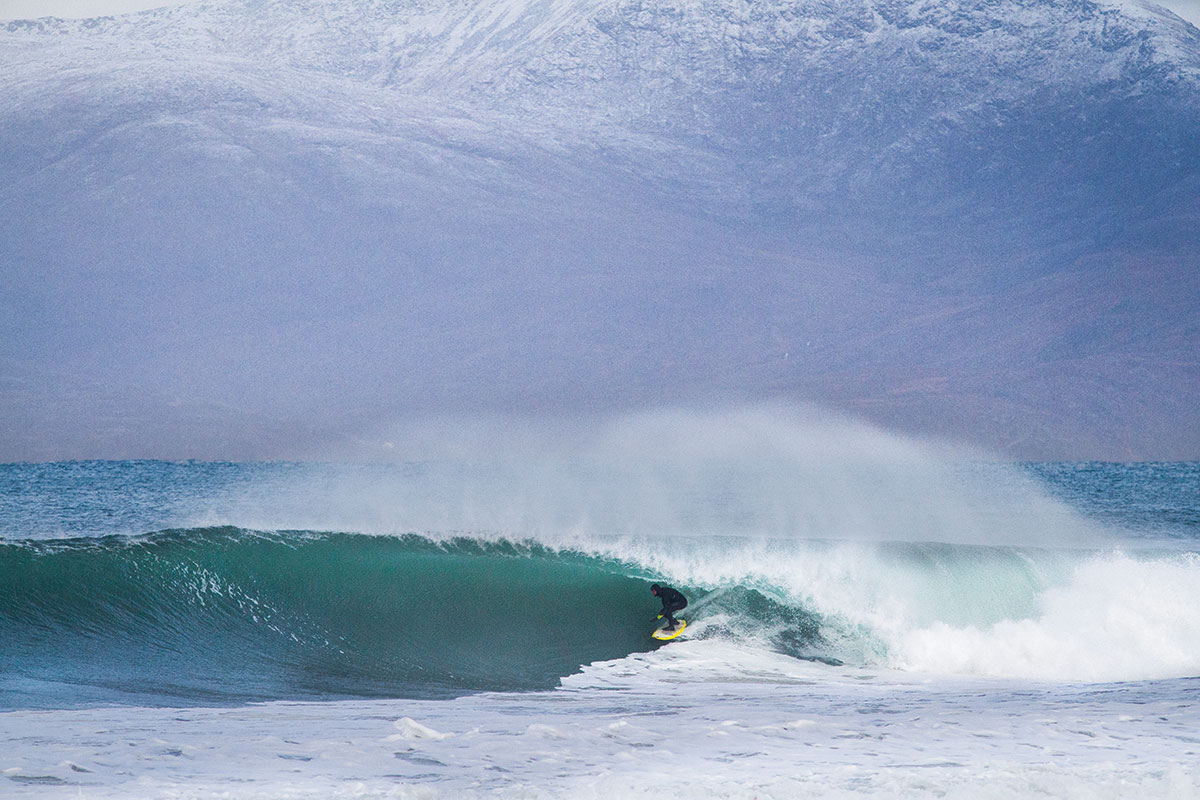 The next morning, we arrived on a new island, which, although just a short distance from the previous, played host to a drastically different landscape, with snow capped mountains rising up from the horizon in virtually every direction, and an expansive, rugged coastline strewn with rocky outcrops and long sandy beaches. As soon as we drove over the brow of the first hill, we could see that a lack of swell would not be a problem here, as bending lines collided and folded over onto a sandbank packed up against a headland.

Nothing was neat or perfect, and for the next hour we searched for diamonds in the rough, driving slowly along winding coastal roads, squinting at waves as they sucked dry onto rock just below, and, when our vision was obscured, hiking up over colossal sand dunes to gaze down on the pristine stretches of beach beneath them. 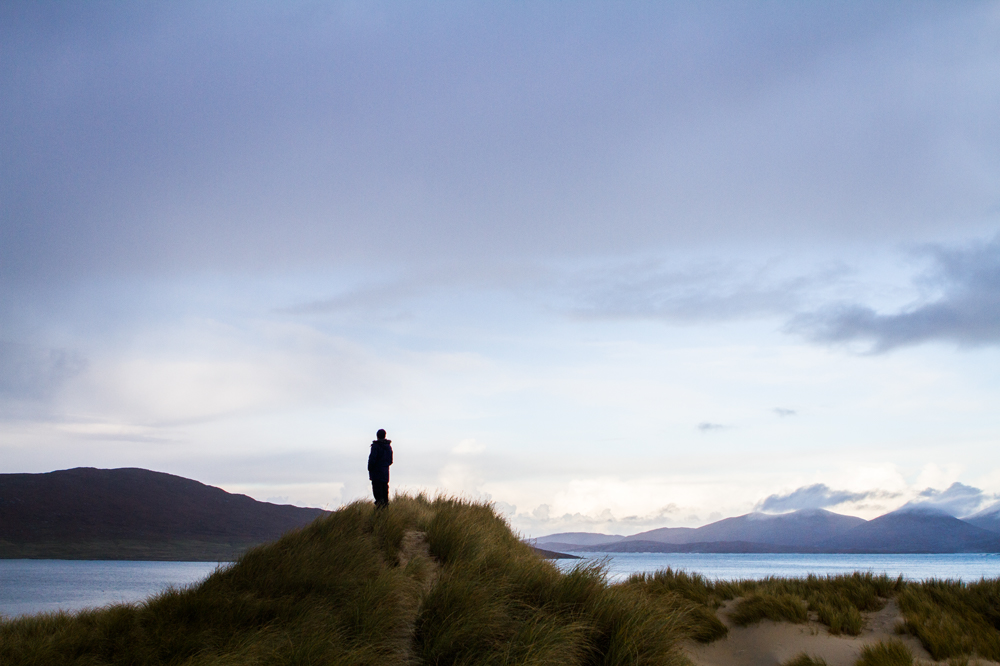 After weighing up our options, we eventually settled for one such stretch of beach, with various peaks breaking haphazardly along it. The boys headed back to the car to get changed, leaving me alone on the dune to scour the turbulent line-up in search of the most promising of these peaks.

As the tide moved and the wind grew calmer, a groomed set marched in, sending overhead, Graviere style kegs reeling off down a sand bar as it met the shore. I hooted and pointed for an audience of none, lost in a child-like excitement that recurred frequently over the subsequent days. 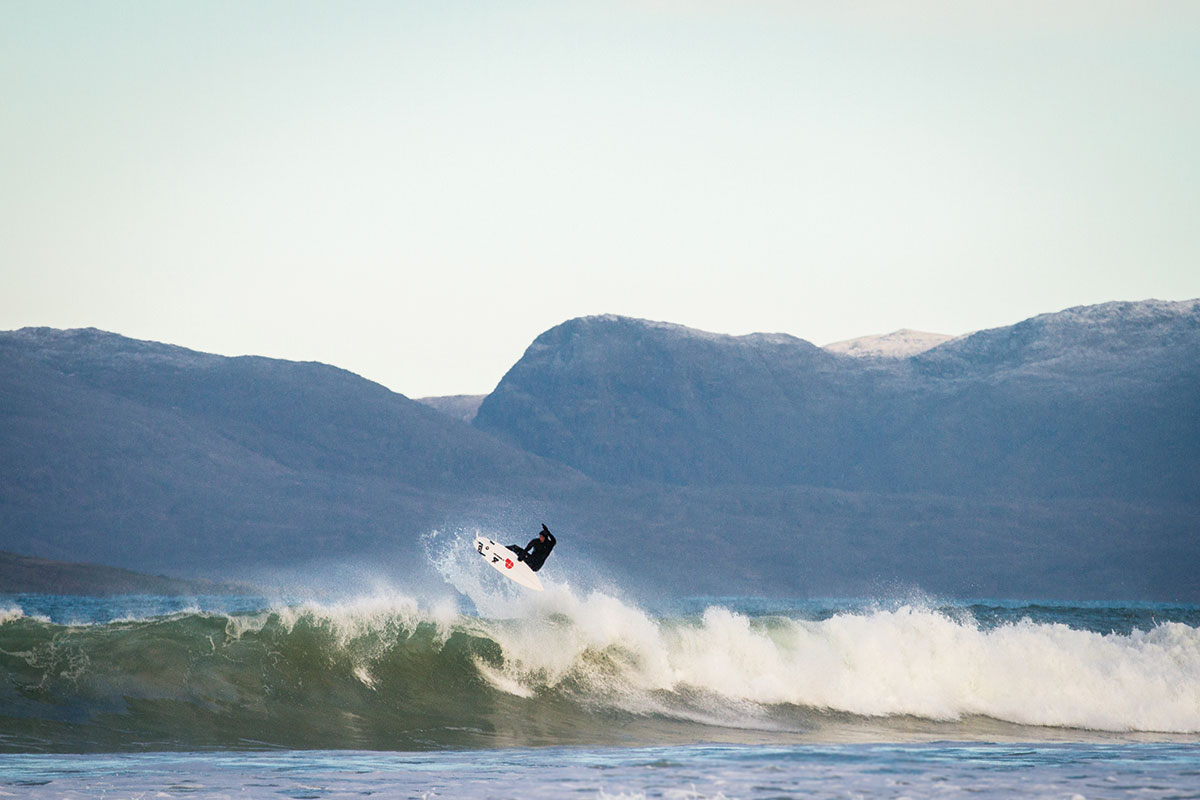 The boys were already planning their return to the islands as we set off home, faces ruddy from howling wind and low winter sun.

“It’s just the fact that there could be a freezing cold, empty G-land out there,” Egor told me, as he reflected on what motivates him to drop everything and head off on these trips.

“In the past we’ve discovered some absolutely mind blowing surf spots, and they’ve given me the best times of my life in surfing.”

Oli agreed, and the two of them soon began recounting tales from their previous discovery missions. As conversation touched on the ethical dimensions of such trips, I put an accusation I’d heard to the pair:

“Are these sort of voyages all about the ego of the surfer though? Just the old imperial mentality of planting a flag in the ground and claiming the land, appropriated through the tropes of surf exploration?” 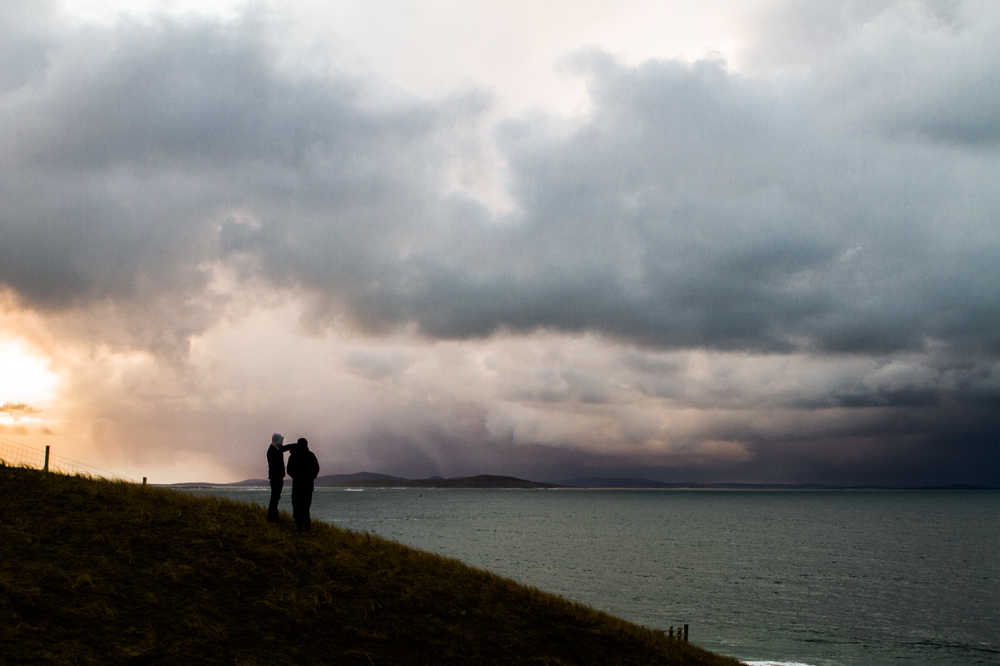 “I think that’s one of the most common misconceptions,” Oli replied pointedly. “I watch back the video from when I found Beefcakes, and it actually sounds far more like that than I meant it to.

“I didn’t mean it like I was sticking my flag in and it’s mine,” he continued, with slight indignation. “I meant I went searching and I found it.”

“It looked like no one had surfed it, although it turned out a couple of guys had.” He paused for a moment. “But I don’t give a crap who’s surfed it! I’m just stoked that it’s there.”

“You don’t know who surfed a place first or who’s surfed it before, or if anyone even has,” added Egor. “But because of the lengths you’ve gone to find the waves, you’re stoked.” 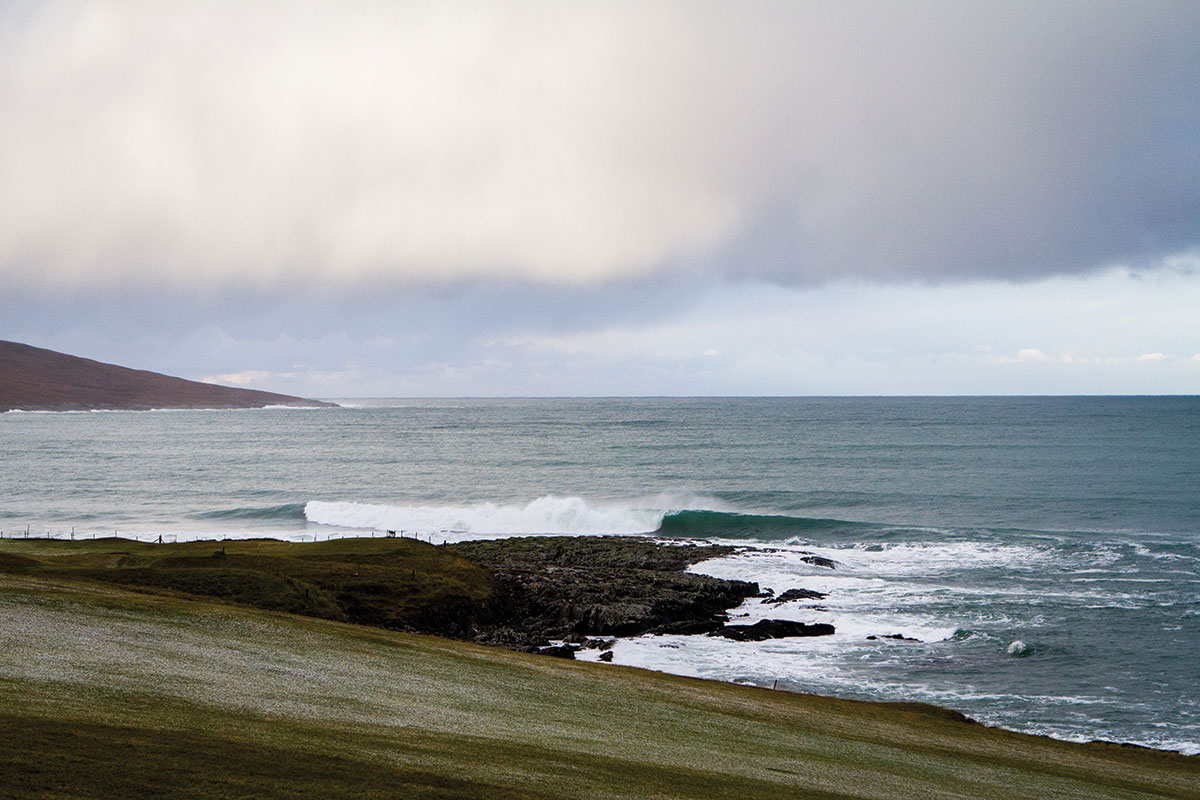 A wave unloads on to a shallow slab on one of the islands many rocky outcrops.

“If somebody else goes and finds it, they’ll have the same experience we did, and I’ll just tilt my hat to them because I know what they’ve done to go and score that wave.”

And what of the notion that pro surfers and their accompanying fleet of cameramen don’t care about exposing spots that locals may have worked hard over the years to keep under wraps, I proposed to them both.

Oli was the first to answer. “Well, yeah. Because I’m always travelling around shooting with a filmer, people think that I love the limelight and I want to blow up their spots, but it’s not about that.

All of that is a tool for us to get there. If we didn’t make a video, these trips wouldn’t be affordable or feasible. I’ve made it into my job so I can do it.” 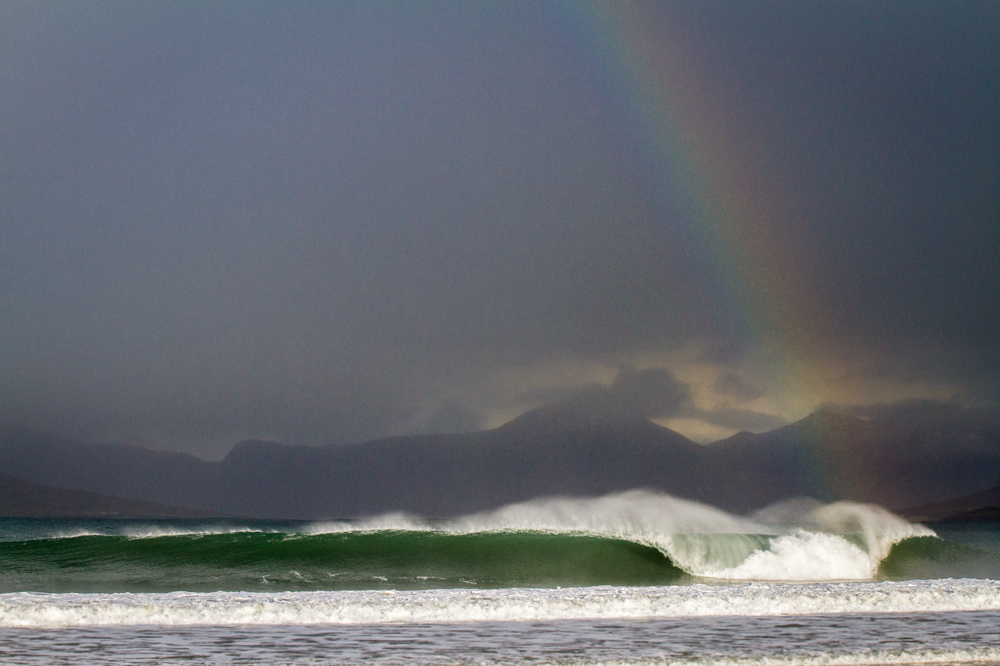 “I thought about that when we found Evies,” said Egor pensively. “Oli’s right – we have to do it to get a tiny bit of budget to go on the trips, otherwise I’d be on the building site and it would be too much of a sacrifice to miss work and go chasing swells.”

“The ideal situation for me” Oli continued “is that somebody just puts money into my bank account, no one knows who I am, I don’t have any sponsors, and I can just go away and hunt around, surf and get the buzz, without having have to tell anyone. That would be the dream, but unfortunately that’s not realistic.”

“I love it, and it’s a passion.” added Egor “I also hope people read that article in the magazine and they feel the buzz and excitement and the element of adventure and discovery, and it encourages them to get outdoors and go down the road or check that beach on a different swell. If it inspires them to get outside more, that makes me really happy.”

And with that, I abandoned my attempts at playing devils advocate, letting the conversation slip back to the planning of the next adventure. 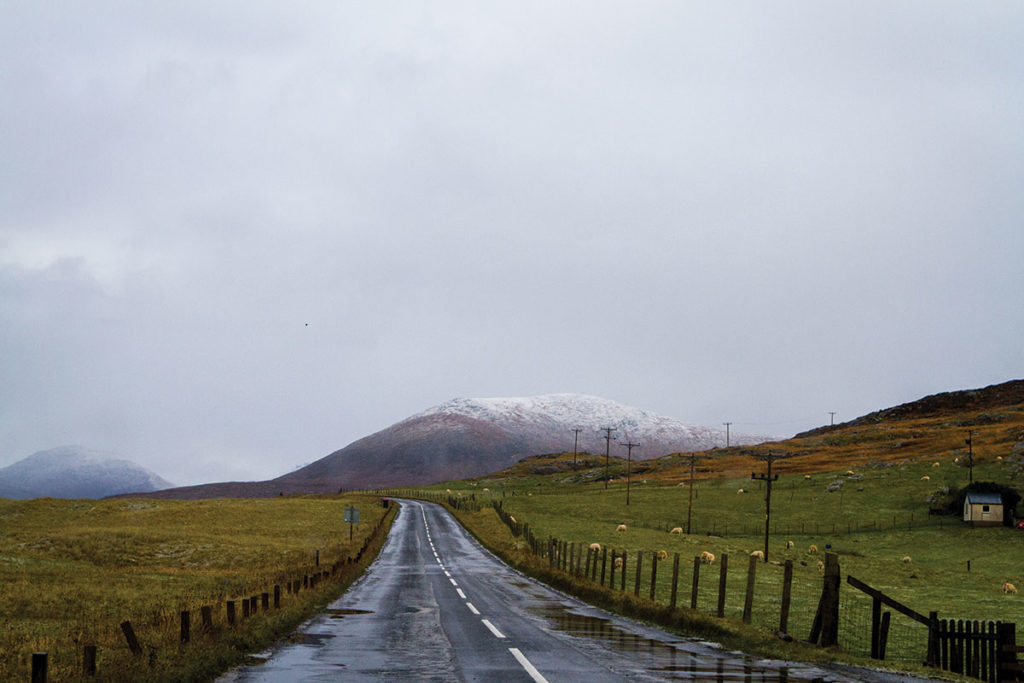 This article was originally published in Wavelength issue 249. Be the first to get our articles in print and online by subscribing here.