[As Wavelength celebrates its 40th birthday in 2021, we revisit at some of the more colourful chapters in European surfing history.]

Essential accoutrements for the golden age of surf discovery surely include VW vans, moustaches and open minds. The valiant quest for long, reeling point tubes was mainly undertaken in the 1970’s, the decade that gave the surf world its arguably finest, single fin aesthetic, as well as some of its very best vistas. Before slabs or oncoming sections were things, the holy grail was impossibly stacked, improbably long tapering walls, where nature met – even exceeded – the realms of surfers’ imaginations.

One of Europe’s very finest waves, Thurso East, was no exception. The moustache, VW bus and most importantly, open mind, belonged to none other than Paul ‘The Gill’ Gill.

In mid-70’s, Britain looked very much like a Ken Loach film. Lots of grey, lots of grim, plenty of brown. While over on the North Shore, Bugs, Shaun et al. were about out performing each other in Free Ride, in Britain getting away from it all was still very easy to do. Especially when you drove north.

Gill, a geography and geology student from Liverpool, equipped himself with The Surf Report and ordinance survey maps in his quest for new surf adventures. Having already made a few finds in Wales, he headed to the other North Shore, the one atop the island of Great Britain.

“In late summer 1975, I drove to the far north in a split screen VW camper. The then current UK surf guide had areas marked around Edinburgh, Fraserburgh and the Mull of Kintyre, but I knew there was so much more to go at” says Gill. His search took him along the swell drenched stretch of coast between Cape Wrath and John O’ Groats. 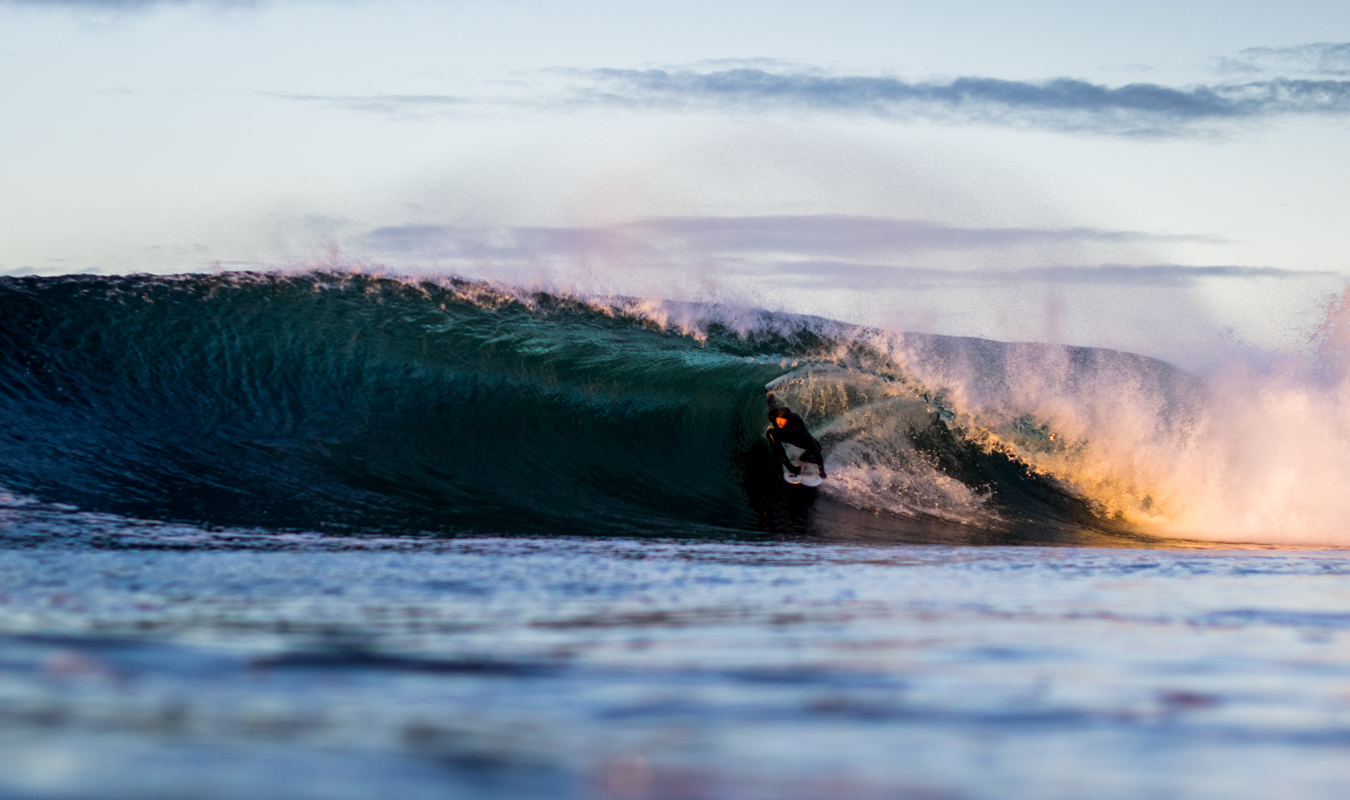 Surfing in Scotland was already established, but still very much in its fledging stage. The first Scottish competition, with just six entrants, was held in 1971, and pockets of surfers were found at places like Fraserburgh and Aberdeen. That still left an awful lot of surf, with very few surfers.

“I went round to revisit Thurso and was shocked at the perfection I’d stumbled upon. Double overhead Kirra style tubes were reeling all down the reef to the castle and then another section to the river.”

Unsure his backhand was up to the challenge of 8ft tubes, Gill went to check a more sheltered peak closer to town.

“There was a young fella standing on the sea wall checking it, turned out he was a novice surfer who’d been to Newquay, tried surfing and continued up in his home town, but had nobody to surf with. His name was Jim.” Gill enquired as to other surfers in the area. “You’re the only one who has ever come up here.” reckoned Jim. 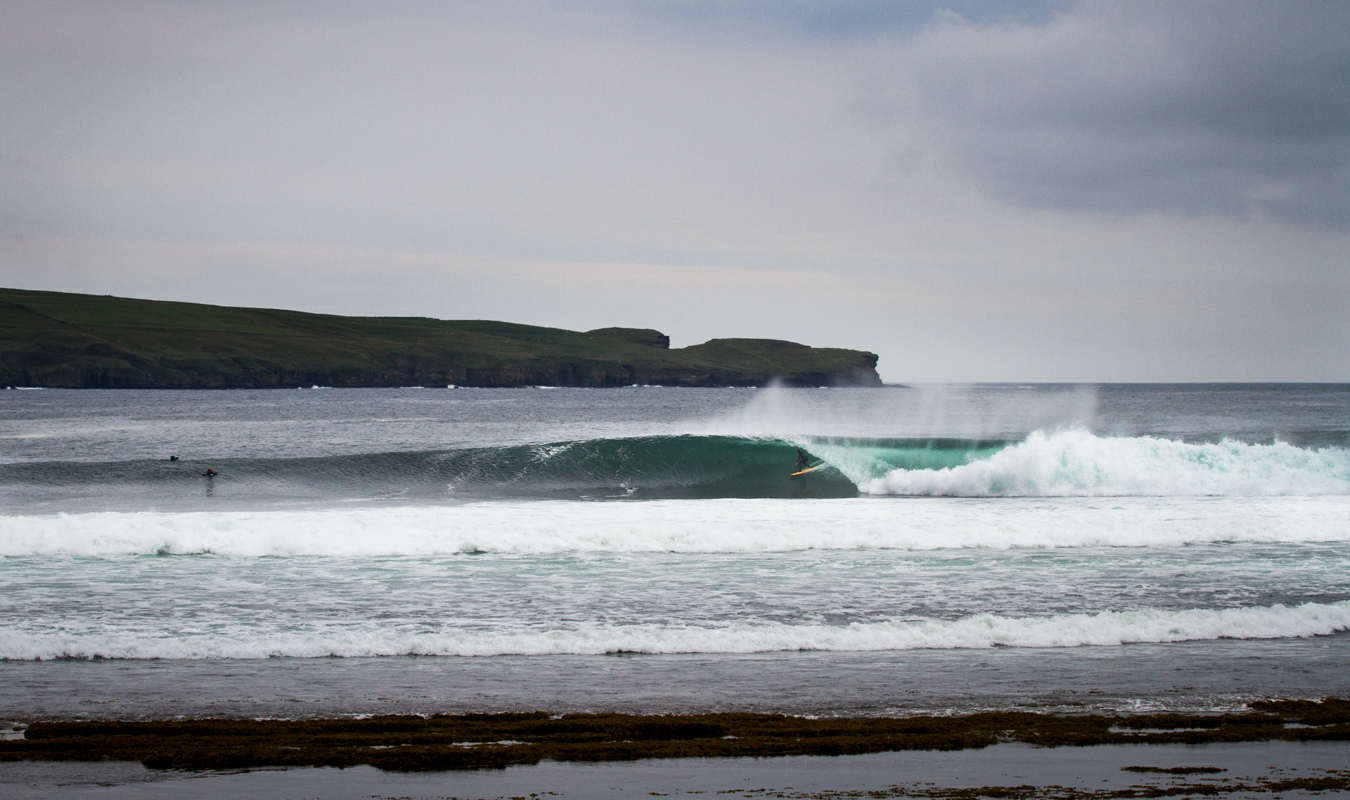 When Gill pointed out the big reef in front of the castle, now known as Thurso East, Jim replied it too dangerous to surf over there. The following day the swell had dropped enough to entice Gill out “to try my luck.”

Another intrepid Liverpudlian, Pat Keiran, was in Scotland the following year, 1976, apprehensive about all the reefbreaks, having only ever surfed beaches in Wales and Cornwall. “I hadn’t seen anybody surf it,” he says of perfect reef at Thurso East. So seduced was Keiran by the quality of the wave, he became the first outsider to move to Thurso to surf.

With only a handful of other surfers active in the area, and infrequent visits from surfers from places like Fraserburgh, he spent countless sessions in perfect waves, all on his own.

In 1978, Keiran wrote a letter home to fellow North West Surf Club members in England. And while the noble tradition of letter writing might seem quaint or out of date today, it doesn’t seem nearly as alien to the modern world as the sentiments in young Pat’s message.

[As Wavelength celebrates its 40th birthday in 2021, we revisit at some of the more colourful chapters in European surfing history.] In late 2003, a Cuban-registered cargo vessel made a [...]