Five Outrageous Tales Of Surf Related Injury From a shaper's bizarre blood vessel blockage to a 2X world champ's burning scrotum - here's proof some of the worst surf related injuries happen outside of the water...

As our regular readers will know, we usually display a fervent dedication to journalistic rigour here at the ‘length.

However today, we’ve decided to take a day off from fact-checking and quoting on the record accounts to bring you five of the kind of dubious tales you’d usually overhear propping up the bar at your local.

We’re not being lazy, but rather honouring one of surf culture’s greatest traditions; where cold hard facts are much less important than entertainment value when it comes to spinning a good yarn. That’s not to say of course that at least a few of these stories aren’t true, it’s more just an admission that most were enjoyed third hand over a few pints and the chances are a little embellishment has slipped in here and there.

But hey, it’s a post-truth world, after all, so let’s dive in, shall we?

We’ll kick things off with possibly the most dubious of our five accounts. This one comes fresh from a mate, who heard it off his girlfriend’s mate, or her brother, or his housemate or something.

So one day the fella in question, whoever he was, boards a flight to France. Late on in the journey he starts experiencing shooting pains in his chest and down his left arm and calmly informs the air hostess he reckons he’s having a heart attack. She’s not convinced, as he’s a young, healthy-looking chap, but books him an ambulance for when they land all the same.

It turns out, after closer inspection at le hôpital, that it was, in fact, a heart attack and the cause was something rather strange. Apparently the bloke had been glassing a fresh stick just a few hours prior to his flight- possibly some sort of channel bottom twin- but history doesn’t relate – when a bit of the resin had found its way onto the skin near an open wound on his arm. When he washed himself off with a bit of paint thinner at the end of the session, the resin had thinned and managed to slip into his bloodstream where a few hours later, it had hardened, causing a blockage severe enough to trigger a small heart attack.

After being kept in hospital for a week, he was released with a clean bill of health to get back to glassing boards, although we’re guessing he probably makes sure all wounds are thoroughly dressed before stepping into the bay nowadays. 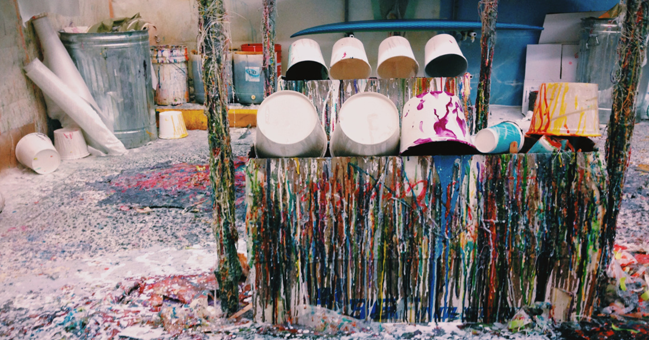 Colourful resin makes for lovely boards and fantastic artwork. Not great when it gets in your veins though. Photo Eye Symmetry surfboards

The next outrageous tale of surfing injury features none other than 2-time World Champ Tom Carroll. The hard-charging Aussie was no stranger to injuries, clocking up a whole raft of horrible breaks and perforations during his illustrious 15-year career, however, we reckon this one surely takes the cake when it comes to most outrageous.

The year was 1987 and TC was surfing a Japanese shorebreak when the nose of his board wedged itself into the sand, causing his back foot to slip off and him to land ass-first right on to his fin. The result was 13 stitches (8 on the inside, and 5 on the out). To keep the wound clean doctors gave him a super-strength anti-bacterial wash, however, the instructions were all in Japanese, so Carroll assumed- somewhat brazenly- that lathering it all over the affected area was the best course of action. Within minutes, his entire scrotum was breaking out in horrible blisters, sending him scurrying out of his room into the lobby of his hotel, where he ran around screaming and pointing at the area in a desperate attempt to acquire some relief for his burning sack. He later discovered that he was supposed to dilute the liquid in a 1 part to 100 solution. 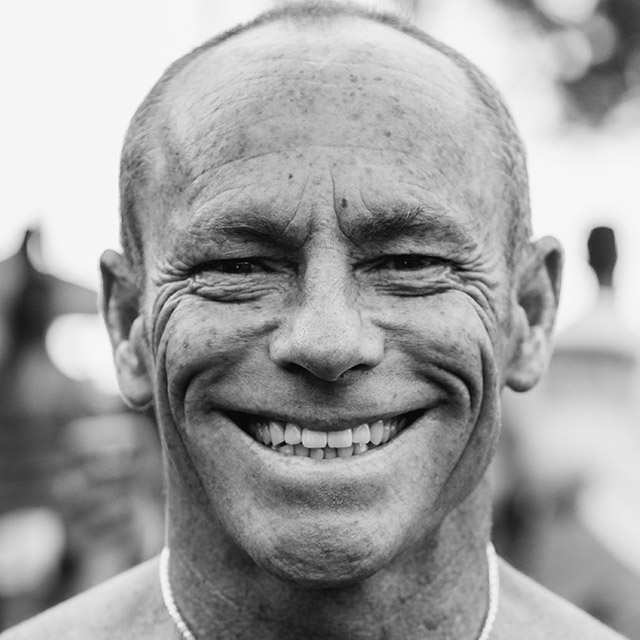 Rumour has it TC didn’t smile like this until a good six months after the burning subsided. Photo Quiksilver

Back in the amateur ranks and closer to home, a friend of a friend was out surfing a terrible Cornish beachie one freezing winter day when he wiped out and popped up with his leash wrapped tightly around his little finger. Although his hands were numb inside his gloves, something didn’t feel right, so he caught a wave in to investigate. Back on the shore, he asked a young bystander to give the digit in question a little wiggle, to see if he could feel anything untoward. The poor chap reportedly went white as a sheet and advised the surfer frantically to seek medical attention as soon as possible. Fearing gore within, he left his wetty gloves on and made a b-line for the nearest hospital. Upon arrival the doctor peeled off the glove to discover the tip of his pinky had been cheese-wired clean off by his leash in the incident. Unfortunately- despite the presence of the detached nubbin, which was perfectly preserved in the fingertip of the glove- the doctors were unable to stitch it back on, leaving the surfer in question with the nickname Richie Nine Fingers forevermore. 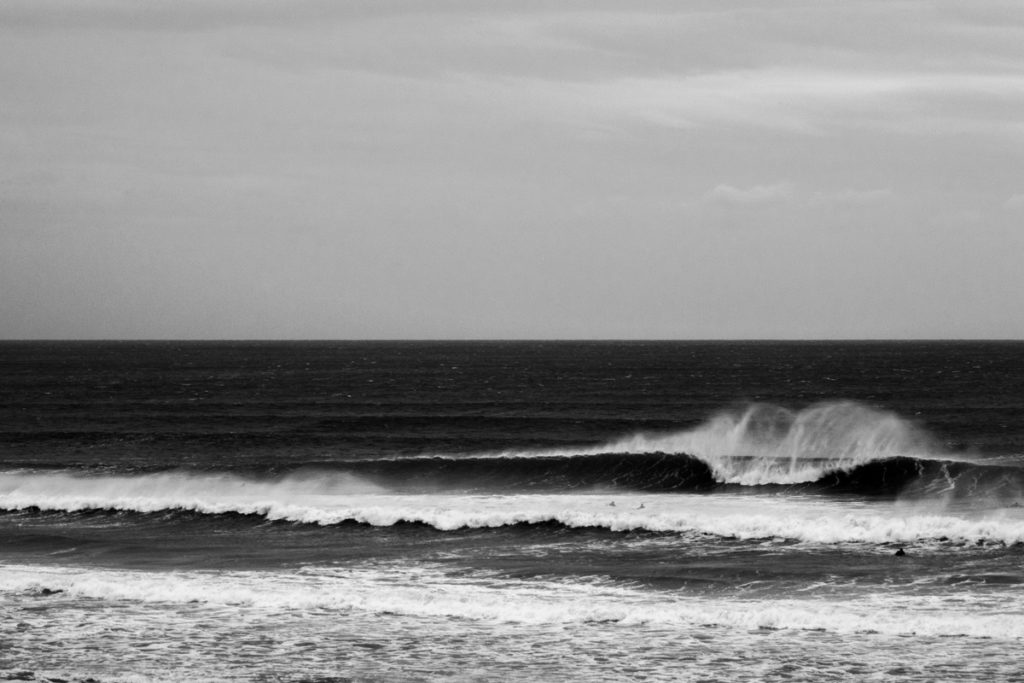 Is an average Cornish beachie ever worth losing even a little bit of a finger for? Photo @lugarts

Perhaps the least dubious of today’s stories features South African surfing legend Derek Hynd, with the outrage lying more in how unimpeded Hynd was by such a seemingly life-altering injury, rather than the event itself.

It was 1980 and Hynd was surfing one of his local events in Durban, SA. He did an innocuous-looking kick out, hopping off the back of a two-foot wave, only to have his board spring back and the fin hit him square in the eye. The best eye surgeon in South Africa was summoned and the eyeball was sewn back up, but the operation failed and Hynd was left with just one working peeper. It is unknown whether this is the true root of his love of surfing without fins, however the incident would certainly be enough to put me off using them for good.

Eye injuries caused by over-elastic leashes were fairly common back in the day, however arguably none-wore theirs better than Hynd, who immediately bounced back to come 7th on the world tour the following year. (A close second would be Jack O’Neill, one eyed surf industry titan and inventor of the full suit.)

The final story comes courtesy of our art director, aka the man who makes our print magazine look as beautiful as it does. A few years back he booked a dream, no expense spared boat trip with a whole bunch of his mates to the Maldives. Following a few days of not scoring anything classic, the passengers spent an evening raiding the booze cabinet and attempting a series of acrobatic dives from the roof of the boat. Ali has a lovely backflip in his repertoire, but on the encouragement of his mates, decided instead to challenge himself to a forward rotation. Their one piece of advice, before he jumped, was to make sure not to over-rotate.

The result was a slow but dramatic under-rotation, which saw him plummeting the 20 feet down to the Indian Ocean in an inverted fetal position, before slapping hard onto his back. By the time he made it back up to the roof of the boat, he was hucking up blood. After 24 hours laid up in spine-tingling agony, gobbling down the boat’s entire stash of painkillers to no avail, he went ashore to the nearest hospital. The next day he returned to the boat with assurances his condition should soon improve and a tube of ibuprofen gel, which the boat’s all-male Indian crew insisted on massaging into his neck and shoulders in its entirety.

After this overdose of lotion did nothing to ease the pain and the worrying spine tingles persisted, Ali was forced to cut his trip short and fly back to Blighty wearing a Bo-Selecta style neck brace. He’s subsequently had to buy a very expensive chair, which I always sit in when he’s not in the office, to ease his recurrent back pain. 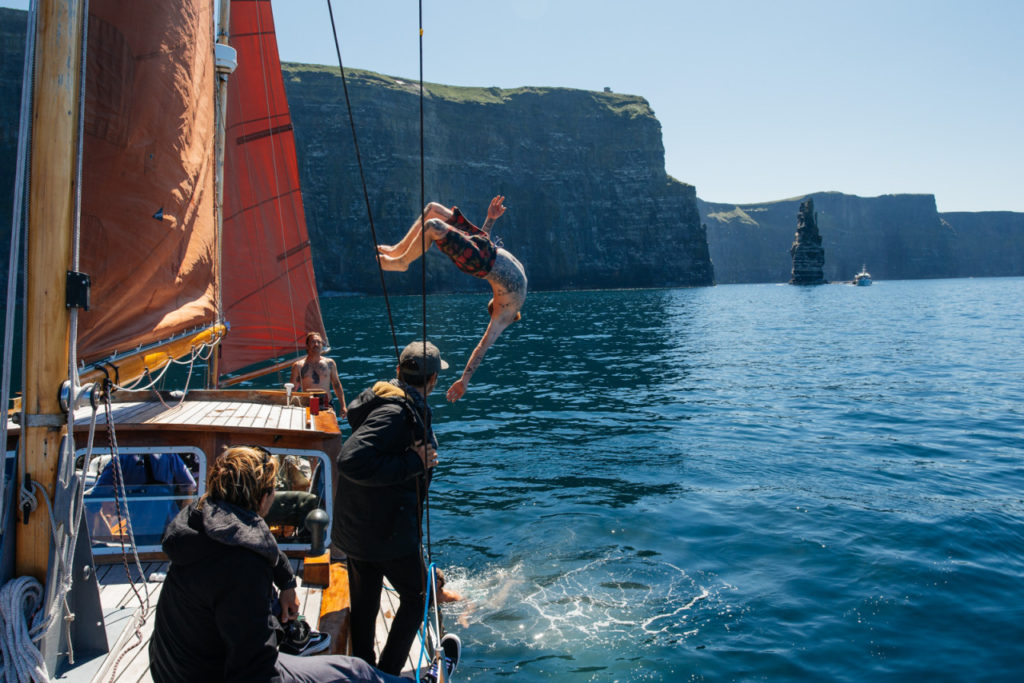 Chippa Wilson sticks to what he knows, with an extended backflip into the Celtic Sea. Photo Bonarme