You’ve been getting your Hawaii on all winter, from comfort and safety of your own home.

You’ve been stoking on the Volcom Pipe Pro webcast, so much so that you had ham and pineapple pizza three nights last week, even though it’s actually just wrong.

You’ve imbibed edits from N Shore ledges from JOB to Koa Rothman to Mase Ho. You flirted with the idea of attempting to recreate the Waimea standing wave at your local. You even strummed a few chords out on your uke. Regrettable, but it happens.

Well now it’s time to take your relationship with the 7 Mile Miracle to the next level, it’s time to actually go to Hawaii.

And what better time to go than late season? None. None whatsoever. 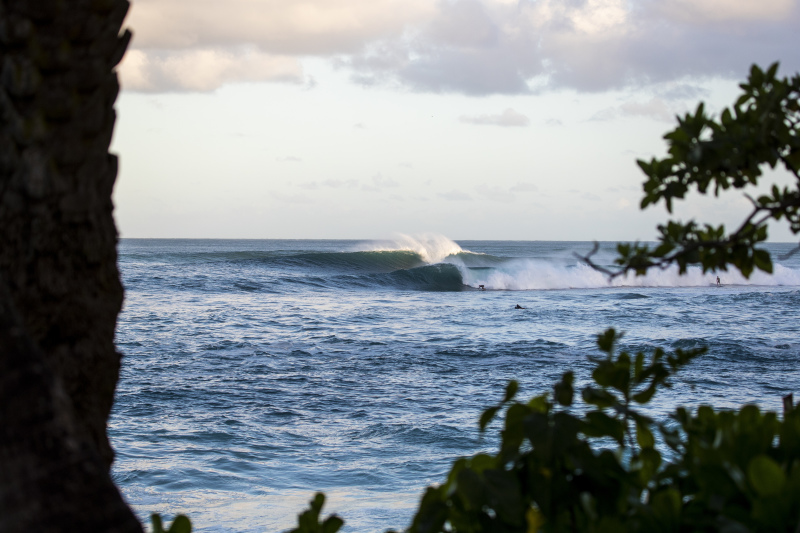 With its spread out lineup, wide peaks, inside bowls and relative lack of pros, Sunset may be your best chance of getting a legit N Shore wave count. Photo: Heff/WSL

1. Cultural caché. Everyone goes on surf trips these days. There are Russian airline stewardesses who’ve surfed Bali more times already this year than you have your whole life.

Having just got back from Sri Lanka, in some circles, might been seen as something to be ashamed of. A missed opportunity to go somewhere with actual waves, instead.

Costa Rican couples yoga retreats, Moroccan missions, none of these lend much in terms of gnar lord points these days. I mean, folk are just hard to impress.

You just got back from the Algarve? Well done, Peter Troy.

Hawaii, on the other hand, doesn’t just change you, it changes those lucky enough to be around you checking the surf when you get back. That big day at your local reef on the swell of the winter? You don’t really call that big, any more.

It’s not just your thousand yard stare, your new quiver of Rawsons, your new found bravado in heavy water. It’s all of these things, and more.

“What’s going on with Roger? He seems different. I heard he paddled out 7th reef Boneyards and was doing the crossword between sets, and surfing switch in the tube on a fish…”

“Yeah. He just got back from Hawaii…”

2. It’s warmer than home but not ‘too’ warm. It’s like, just right. You won’t burn your face off on the first day, you won’t get double pterygiums before brunch.

Go to the equator in February after four months of Europe’s brutal icy darkness and it can be a case of too much, too soon. The Islands, on the other hand, nestle at a very reasonable 21 deg North, and thus are moderate in their tropicality, not punishing.

It’s boardies and maybe a top. Or a shortie, if you’re skinny. It’s fine. It’s just a body.

3. Not all of the QS top 700 have gone home, but many, many have. That means it’s considerably less crowded in terms of overseas pros and their entourages than Triple Crown Season in Nov/ Dec.

You probably don’t need me to tell you that good surf trips and the QS being in town, go together like oil spills and nesting seabirds.

Let’s assume you go after the Pipe QS, then not only have the QSers gone home, they’ve actually gone home twice! 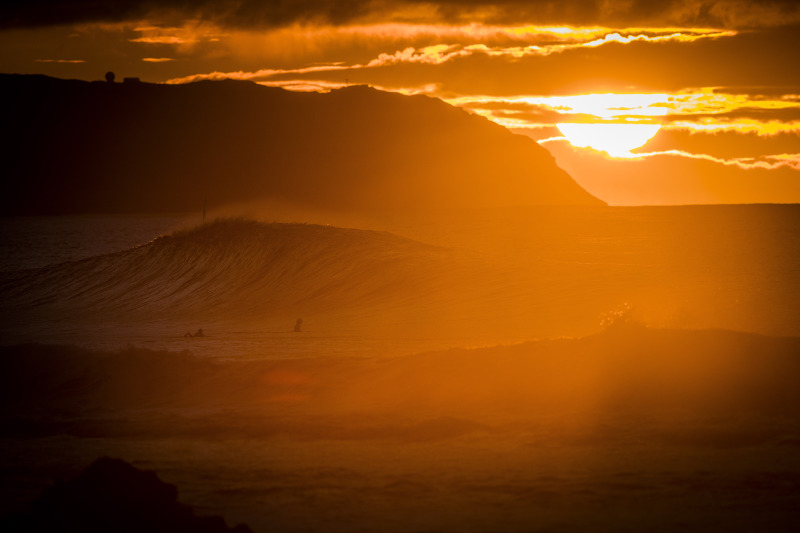 While ‘gramming sunsets is generally to be discouraged, the exception is of course, Kaena Point. You’re in Hawaii, you let people know. Photo: WSL/Poullenot

4. If it’s been a good season from early on, and to an extent even if it hasn’t, the local crew have had their waves and might be a bit mellower in terms of their overall lineup ferocity.

Think apex predators – the big cats perhaps – that are dangerous when hungry, but much less so when well fed.

By the time Feb rolls around, all being well Pipe bombs have been snaffled and satiated appetites. Edits have been made and garnered enough views to keep sponsors happy, contracts renewed.  All this means that the late season North Shore tripper might find his or her chances of nabbing a bit of their own Seven Mile Miracle stoke that wee bit higher. And every little helps.

5. It’s (a bit) cheaper. It’s still not exactly a bargain, but certainly less premium priced for digs than the Thanksgiving to Xmas, Vans Triple Crown peak.

Flights are also a bit cheaper from mid-Jan after the festive season, or Kalikimaka, as you now call it.

6. You can pick up mad used boards. Sure, your local shaper makes guns too, but do they give you the horn in the same way a classic North Shore foamsmiths do?

All those aforementioned pros that go for the silly season, they order swathes of Arakawas, don’t need/break em all, then put them in the used rack to sell. And there they are, just winking at you. 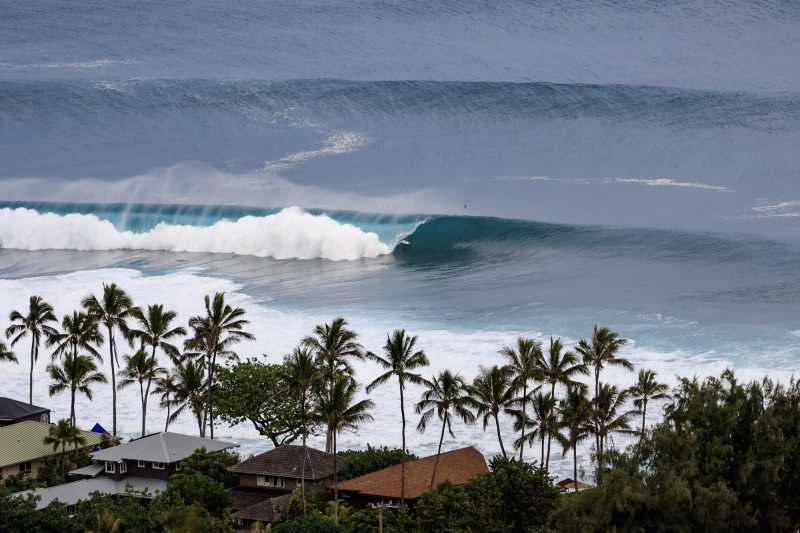 7. Swells are coming much later these days. OK this might be somewhat shonky science in terms of the long term climatic record of our planet, but for the last couple of seasons at least, solid W and NW swells have come to the party in April, which is pretty late.

Usually, as the northern hemisphere heads into summer, a blocking high establishes itself in the North Pacific. More often than not in the last few years, this has happened later than usual, meaning storms keep getting generated and swells keep on coming.

Or at least that’s what you’ll tell yourself as you reach for the credit card to book flights.

8. Better photos. All North Shore photos are cool versus their equivalent from elsewhere.

You biting into a Kua ‘Aina burger, awesome.

You riding a bike on the bike path, Bushman under arm, fantastic.

You checking the surf at the Rockies right of way, incredible.

Contrast that with your surf trip pics from basically any and every other surf trip, which, in truth, are a blight to both your Profile and everyone else’s News Feed. Let’s be clear about that.

There is no danger whatsoever of that friendly Kiwi called Simeon posting pics of you awkwardly bottom turning in a long sleeved white rashie and reef boots on the North Shore, but there is every chance of that happening in Indo. In fact, it’s guaranteed. 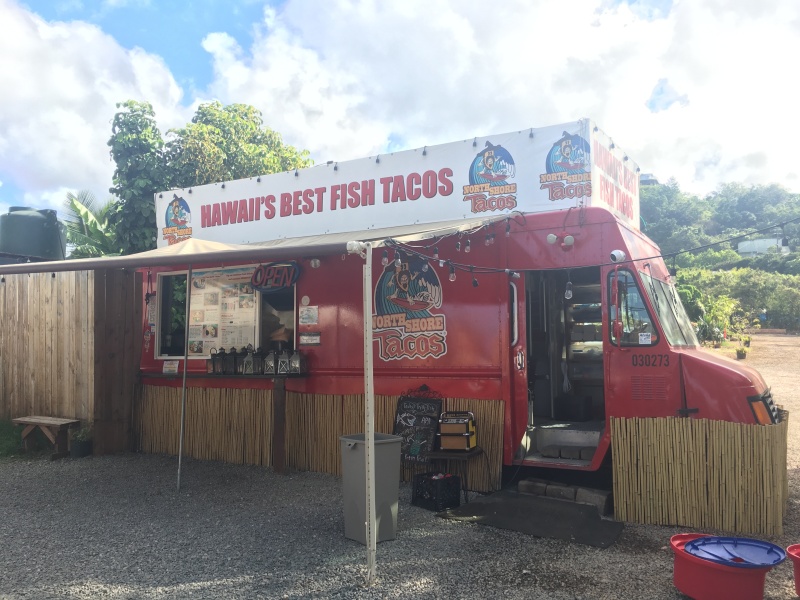 Of the many annoying habits you picked up and are since inflicting on your crew back home on a regular basis, asking if you can stop at a ‘food truck’ on the way home from surfing is up there. “We’re going Sainsbury’s, you twat.” Photo: WSL

9. Saying that, why should you go to late season Hawaii versus early season Indo? Good question. Actually, on balance… go Indo.