“Everything in life is vibration” – Albert Einstein.

You may often find yourself searching for waves in some awesome part of the planet, and because of this unique view of the World and actual physical and mental connection to the Earth, situations may arise to test you.

You might find the planet sends you a message, expanding your horizons in eye-opening ways that could easily be overlooked if you’re not used to looking for them. A couple of months ago, in South West France, I found myself in the throes of one of my burn as many candles from as many angles as quickly as possible, full steam ahead phases.

I was being paid to create good vibes at the sickest surf house in Hossegor and burn about in a brand new gangster-black Mini Cooper S, all solely to ensure my new friends/customers got the best waves and had the best trip possible.

In reality, this entailed surfing the best barrels in Europe at dawn, surfing them again at lunch time, then eating and drinking for the rest of the day before finishing up with a 3am Eau du Vie story time nightcap, for a month. Life was very, very good.

But clinging on to a decade old, finely crafted ego of a self-proclaimed, international vibe creating, surf travel rockstar and riding that wave with no intention of slowing down, can be exhausting. Essentially, I needed a day off. Luckily, this coincided with our chef’s downtime.

We decided to cycle to Biarritz and back, sampling as many typically French delicacies as we fancied to fuel our pedal-powered excursion.

After several hours, a handful of oyster and champagne breaks, and a questionable decision to fill our water bottles with local rosé (which definitely had a part to play with a rather bloody bail into a ditch), we were back in Hoss and heading to meet our crew at Chez Menus. Turns out Kelly had also popped in for a moules-frites or two.

With Slater being my biggest hero, and feeling like a bit of a liquid-fuelled hero myself, I played it cool, spinning yarns much similar to this one, all while contradictorily drinking pints, smoking Marlboro Reds, whilst still proudly sporting full cycling lycra like a 70’s Tour De France Athlete.

“Whether it was the loudness of my outfit, or the volume of the deliverance of my fables, I caught the attention of The King.”

I was outside, on approximately my twentieth fag of the day, pint in hand, talking some shit to my mate about how surfing has made me more present or something, when Slater strolls past, pats me on the shoulder, and says, “Take it slow riding home tonight, mate,” to which I reply something (almost definitely) witty, and we end up having a five minute conversation about surfing in Newquay, which he remembers as being a cool town with big waves.

Then he politely excuses himself, starts to leave, before turning around (in slow motion in my head) and says, “Slow down buddy”.

I’m on fire. Somehow I make it home and obviously don’t remember going to bed. I might have fallen asleep on the toilet.

A few days later I break my foot, rolling it off a curb, not even pissed. Fuck. Obviously, I didn’t see the messages being delivered to me by something bigger than even Slate’s himself. Obviously, I’m now listening. 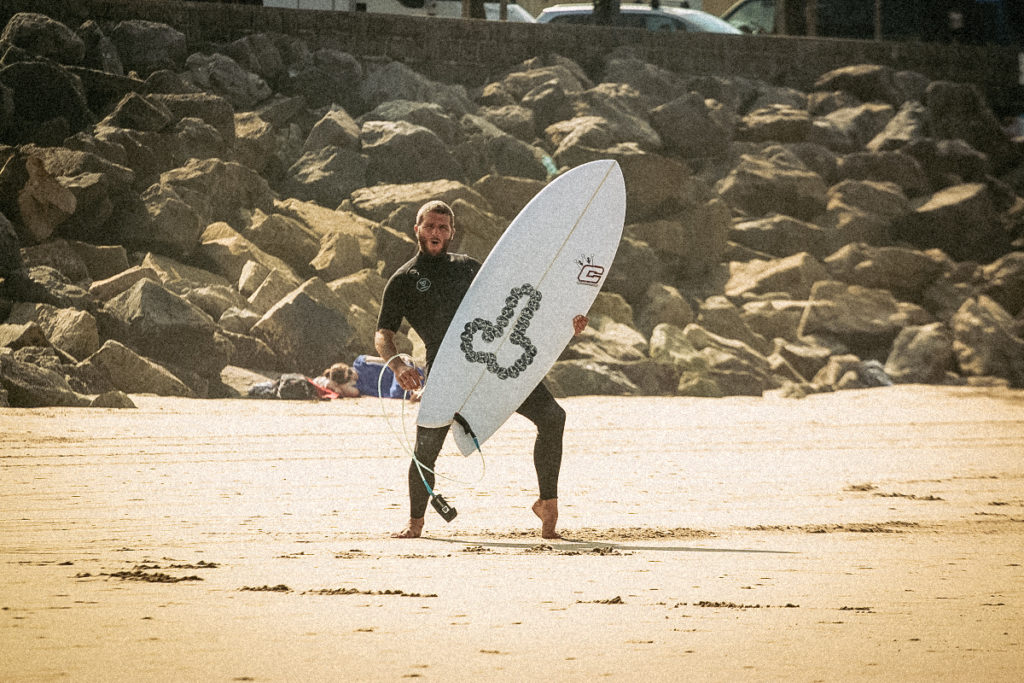 Fast-forward a couple of physically painful, slow, reflective months and I’m attending a Yoga Teacher Training Course in the tropical paradise of Costa Rica. My foot is still pretty fucked, trapped in one of those inflatable boots.

I’m feeling like shit, so I sign up for a Reiki session. A woman who knows nothing about me proceeds to tell me my life story, adds that my nervous system is a mess and that I came to this course at the right time. Coincidence or not, less than a week later I take the boot off and my foot has healed faster in those few days than it did in months.

One month later, after the most mental experience of my life, more overwhelming than any alcohol, drug, or sexually induced high, I’ve graduated as a yoga teacher.

And the initial intention of teaching yoga on surf trips has been replaced by something else: an understanding, or more of a knowing; knowing that yoga, surfing and life are all connected.

It’s all the same thing, bound together by something bigger that, every now and then, will send us a message. We just need to have our eyes open to see it, and allow ourselves to truly listen to hear it.

Bearing this in my newly, slightly more peaceful mind, I’m now kinda confused. The surf and yoga combo has become a buzz-term.

When you hear surfing and yoga together, you think tropical surf camps, sweaty shoulder stretches, and distracting downward dogs from ladies in Lululemon. I mean, it works, and there is a relationship there, but it’s in the phases of a casual courtship rather than the full-blown marriage it deserves.

This is probably because our Western view of yoga is of physical exertion, stretching, maybe even exercise, which isn’t necessarily wrong, but this body movement, or ‘Asana’, is just one-eighth of what makes up traditional yoga.

I missed a crucial part of living the yogic lifestyle that I outlandishly overlooked for decades: be kind to yourself, love yourself, and take care of yourself. This is known as ‘Ahimsa’ and its literal meaning is ‘do not kill’, or ‘do not hurt people.’ In a world that’s growing increasingly harsh, it’s easy to fall into this aggressive way of life.

I’ve seen, and even been part of, instances where this attitude has extended to the place most of us are using to relax and enjoy ourselves: the ocean. Our egos take over, and they collide. We give people we don’t even know dirty looks for riding a piece of the ocean that we think is ours.

We may even shout at them, or punch them. Fuck that. Talk to those sharing this miracle with you. Smile if they get a bomb. Salute them. Scream. Go nuts. You are sharing a magical time with absolute strangers.

It can be difficult to wait for the next wave, even on good day, but try it. The positive vibes are infectious. And if you’re just starting out, don’t blame yourself if you don’t progress as fast as you want, let it develop at its own speed, and enjoy the ride. 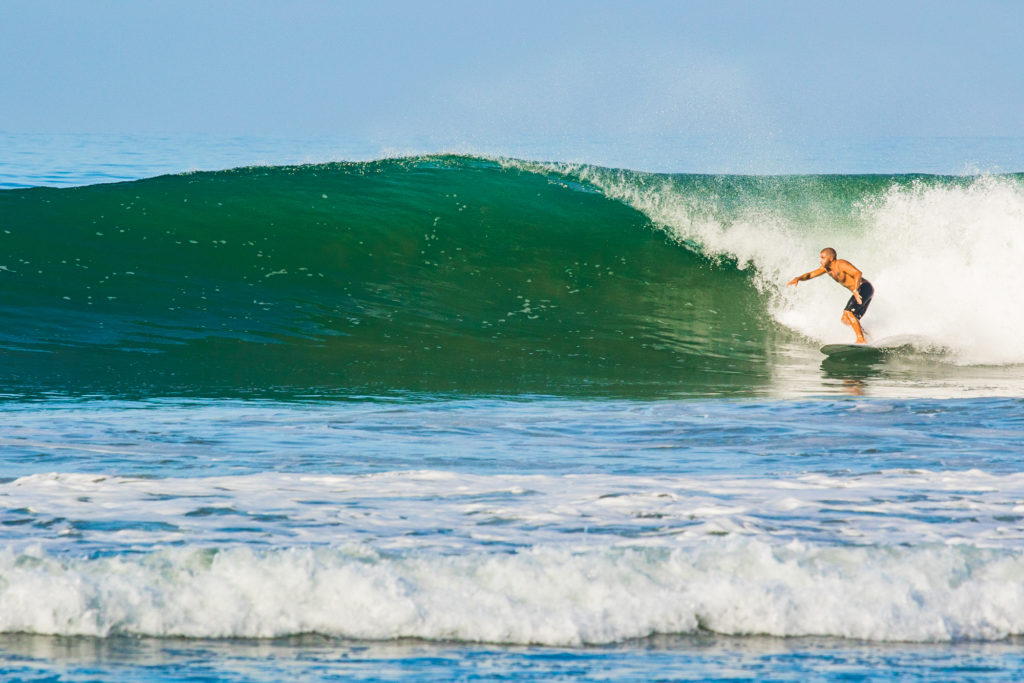 I won’t go into everything that ‘yoga’ consists of, but long (1700 year old) story short, the combination of Asana, Ahimsa and the other ‘limbs’ were essentially used to prepare the body to be able to sit for long periods of time, to meditate. Therefore, yoga boils down to meditation: the aim to be completely present.

You know what else gives you that experience of being present? Surfing. The repetitive motion of paddling out back, that intense blur of presence when you’re flying down a wave, even the sitting out back, it’s all very meditative.

You literally feel like a part of the wave; you are the wave. Our relationship with surfing and yoga is so much deeper and connected than we think, which, for the realists amongst us, is backed up by actual science.

Remember in school when you learned that we’re made up of atoms and that these atoms are in a constant state of motion? Well, scientists now say that this motion is just vibrating energy, that the law of nature states everything must have a vibration.

Sound is also a vibration and so are thoughts. Everything that manifests itself in your life is there because it matches the vibrations of your thoughts.

To begin to understand what I’m trying to say here, picture the human body – a big, beautiful mess of cells made up of atoms, which are in turn made up of particles of vibrating energy – then picture the ocean and the waves we slide around on.

The form of the wave takes on its shape because it is responding to something in nature. It is music that has taken on visible form. The form we have taken on is no different, deep down; like every wave that has ever existed, we are all unique, shaped by our own individual vibrations.

So next time you’re watching a set roll in, paddling out back, or cruising down the line, do so with an even bigger smile on your face knowing that we are all vibrations, we are all the ocean, we are all the waves.

And, if your idol sends you a message, listen.

Max works for Ticket to Ride, running surf and yoga camps all around the World, with the next (less debauched) adventure being a surf & yoga camp in Costa Rica.

This article was originally published in Wavelength issue 249. Be the first to get our articles in print and online by subscribing here.