So you fancy a trip away, of course you do. By the looks of things – and allow me to be frank here – you look like you need one. You want to ride waves, you want to get out there and explore, have epic experiences in the great beyond.

Sure, you could take the big metal bird in the sky off to distant shores, but that’s all a bit carbon guzzling and pricey. Plus, deep vein thrombosis, baggage handlers from hell vs your precious quiver of surfboards, forgot to print out your boarding pass… I’m getting anxiety attacks just thinking about it.

Hence the rise and rise of the staycation in recent years. In terms of a surf trip, it also happens to help if you live on a collection of green and pleasant islands surrounded by all kinds of beautiful coastlines and surf opportunities, like ours.

Thing is, partly due to popularity, and partly due to the fact that they’re pretty epic machines, camper vans are a bit pricey to get hold of, and then there’s the maintenance and upkeep.

For all #vanlife’s lo-fi chic, it’s no poor person’s game.

This being the 21st century and all, of course there’s a handy solution that lives on the Internet, in the form of the shared economy.

A clever person coined the phrase “access is preferable to ownership” and how very right they were. You can hire a camper with Yescapa and get that epic road trip experience and make memories you’ll savour forever. It’s like Airbnb, but for camper vans.

An old fave, you’re not breaking new ground here, but the coast is so long and varied that you can find a wee slice of whatever you fancy.

Go festival style for the Boardmasters and Newquay surrounds and go large, chill out in the dramatic surrounds of North Devon, or double down and keep going until Land literally Ends, you never know what you might find.

There’s even a slice of the magical Shire in south Devon, if you’re feeling really lucky. With so much on offer and an option for every wind and wave combination, it’s no surprise the SW is the epic centre of the UK surf scene.

Breaks: Fistral, Porthleven and Croyde are the regional classics

Bring: A sealed 3/2 for summer/autumn should be sweet 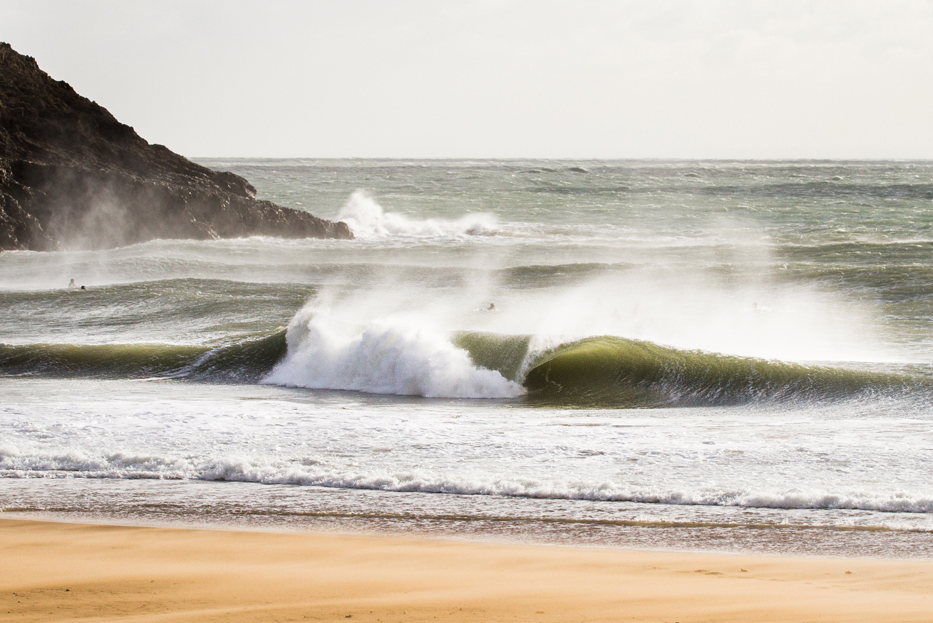 Cymru: come for the Eisteddfod, stay for the tubes!

Walians have been wanderers for millennia, some of the oldest pilgrim routes in Britain cut up and down this ancient, beautiful land. In terms of fun, it’s not all rugby, male voice choirs and sheep… there’re great waves to be had, too.

The west coast is relatively swell-sheltered (by Ireland) compared to north Cornwall, but still cops more wave action than you might expect, ideally you want your Atlantic lows a bit lower.

“It’s not all rugby, male voice choirs and sheep”

Meanwhile, there’s epic scenery and loads to discover, from castles to pointbreaks to pubs. And just in case Huey isn’t cooperating, as luck would have it, there’s Surf Snowdonia located up near beautiful Conwy, where the waves are guaranteed to crank every single day, a must-surf for van trippers in the area.

Breaks: Fresh West is the swell-puller, with the coast having surprises in store for the adventurous.

Bring: The brine can be fresher with a wee bit less Gulf Stream, plus, a cagoule could come in handy. It’s green for a reason. 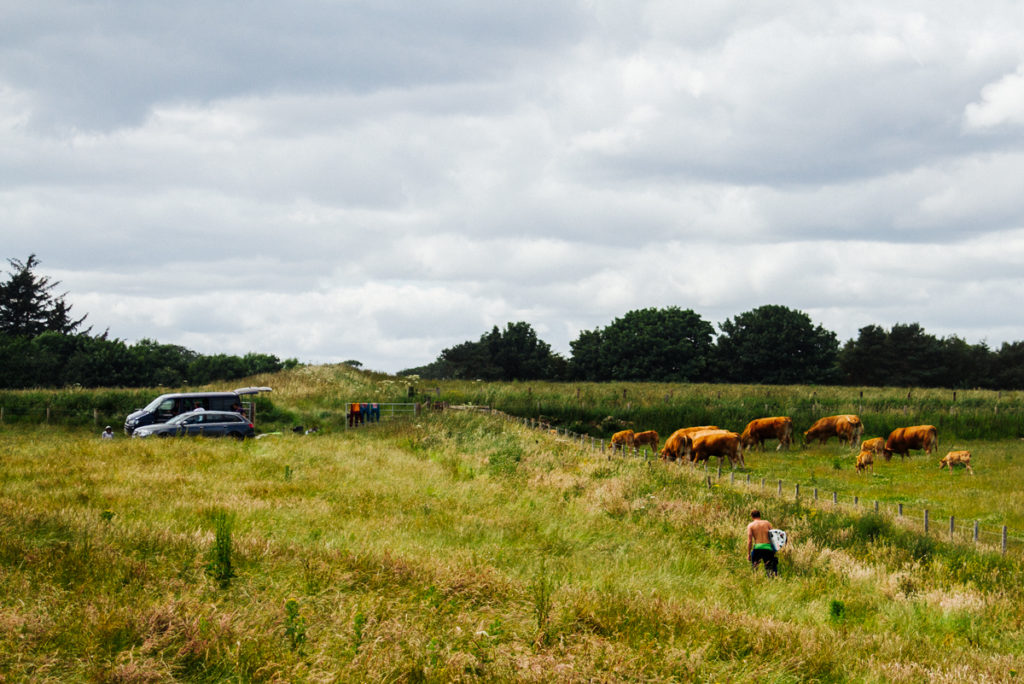 The cows aren’t sitting down, a surfer isn’t wearing a fleece… must be summer in the North East!

Home to some of the very finest surf spots in Britain, the coastlines of Yorkshire, Tyneside and Northumberland may not be as etched into the general public’s psyche as surf destinations, but every surfer knows just how epic the waves can get.

While summer surf is generally not known for its consistency in these parts, you can get lucky and score some unseasonal swells without the crowds, and then when autumn fires up, so too does the North Sea.

Waves or not, there’s loads to explore and much less of a scene than the Atlantic coasts, making the NE a great last minute choice when all the elements all come together.

Breaks: Scarborough is a regional classic. Tynemouth has a beach scene you weren’t expecting around the Toon. 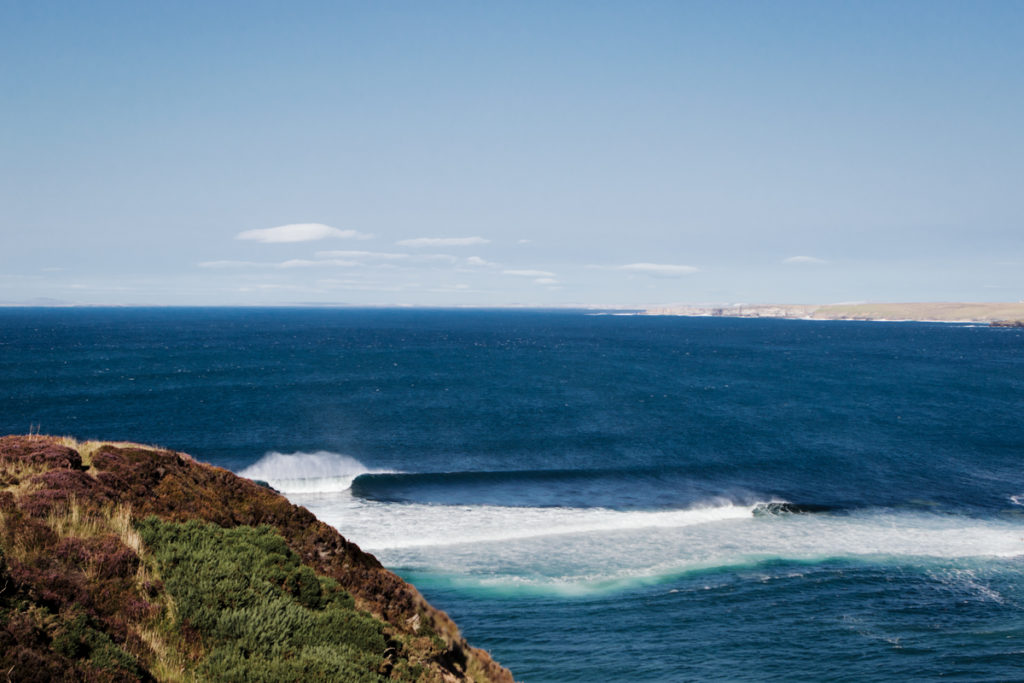 Scotland is so beautiful that Packham and Strachan refuse to leave between Winter and Springwatches.

Thing is, they don’t even like Golden Eagles, they just pretend to so they can have their pintails in their trailers and get deep in the Caledonian curl as often as they can.

Seriously though, if you’re prepared to make the extra investment in terms of driving time (assuming you start down south that is… if you live in Inverness, it’s a mere short hop) you’re in with a chance of scoring the best waves in Europe on any given day.

Mind blowing mountains and coasts, wildlife and whisky, once you’ve scored up here, the experience will invite you tae think again about ever going elsewhere.

Breaks: Thurso, Brims are the Caithness go-to’s while on Lewis, try the beachie at Europie.

“once you’ve scored up here, the experience will invite you tae think again about ever going elsewhere”

Save the planet by getting in green room on the Emerald Isle. Photo Pete Flemming

You’re gonna need to jump on a boat to drive to the island of Ireland, which means you could even score a cheeky Wales side trip en route to the ferry, the classic Celtic twofer.

Ireland is blessed with world class surf, world class pub culture and all round epic vibes. In terms of van tripping, it’s got everything you need, with a long and varied coastline with sweeping bays, dramatic headlines and surf in every nook and cranny.

“The craic is always offshore”

Weather-wise, sure, it’s not California, even if your van is, but rain or shine, the craic is always offshore. Despite several decades of worldwide acclaim as a surf destination, it’s still not as crowded as it could be, meaning there’s plenty of elbow room for those who savour a bit of solitude.

Breaks: Easkey, Bundoran and Lahinch are the main surf towns, but there waves are more or less everywhere

Yescapa offers camper van rental with more than 6,500 leisure vehicles available across the UK and Europe. This campervan rental marketplace connects holidaymakers with local owners and provides insurance, security and mediation for each hire.

Try hiring a campervan first to help you decide whether you want to invest in one in the future. Prices can start from £40,000 to purchase a new campervan – a huge investment that not everyone can afford.

With cheaper prices compared to traditional rental companies, you won’t have to purchase an expensive vehicle if you only plan to holiday for a few weeks of the year.

Thanks to the sharing economy, it’s not only holidaymakers who are reaping the rewards of the UK’s current camping renaissance. Since its launch in 2012 Yescapa has grown significantly, generating over £10 million for leisure vehicle owners benefiting from the boom in camping tourism.

Yescapa allows campervan owners to earn when their vehicle would otherwise remain idle on a driveway. It’s quick and easy to get started with insurance included for all owners as standard.