It all started as a one-day event on the grassy knoll above Pantai Batu and each year since the team at Deus have been adding and tweaking, seeing it morph into the surfing extravaganza, complete with ladies division, Fish Fry, and men’s logging event, you see today.

The event kicked off Friday with the Men’s Qualification heats, sent out in heavy swell and windy conditions. Both men and women’s qualification heats were set to run but organizers decided early on to postpone the women’s heats until the next day, a decision that was greeted by a cheer and an audible sigh of relief.

No matter the gnarly conditions the men still treated us to some exceptional surfing, dropping into the bombs out the back with grace- and even sometimes ease. That strategy didn’t pay off for Deus rider Husni Ridhwan who was caught out of place took a heavy beating. The announcer joke that “we’re now calling those big ones out back ‘Husni’s’”.

Later when the scores were read out and he came last, all Husni had to say was “ahh fuck” followed by a little laugh.

Saturday saw the Ladies Qualification heats. Those lucky enough to be awake at 7am found glassy conditions, and significantly less swell than on previous days. The performance right-hander at Pererenan was peeling perfectly nearly all the way to the beach. First at it, was round one of the ladies.

The audience were treated to a show style and grace all morning as conditions held and coffee flowed. Heats progressed until the early afternoon when the wind began to pick up again. With the field set for the men’s and women’s semi-finals, the crowd retired, satisfied with the show they had seen to the shade of the Deus Temple of Enthusiasm to await the opening of Andrew Wellmans ‘Lookbacks and Laybacks’ art show in the evening.

Sunday saw finals day and the Fish Fry event. As dawn broke glassy conditions were revealed once again. The first men’s semi-final heat was in the water at 7am sharp for what would be a thrilling day of competition.

Consistent swell offered all the contestants a fair crack of the whip, with wave selection and patience proving paramount. Progressing through to the men’s final we saw Kai Ellice-Flint, Jack Lynch, Harrison Roach, and Matt Cuddihy and while the ladies lineup included Rachel Tilly, Honolua Blomfield, Hiroka Yoshikawa, and Sierra Lerback.

The finals proved to be the dramatic show we had been waiting for. With Harrison Roach dislocating his shoulder trying to keep hold of his board; he finished the final paddling with one arm. Others struggled too with various injuries and ailments, however, plenty of waves were ridden.

The ladies final saw Rachel Tilly snag some of the best waves of the competition, with a noseriding masterclass, punctuated with big sweeping turns. As is tradition the winners of each event were kept secret until the wrap up party in the evening.

As swell started to build again it was time for the Fish Fry; a keel fin fish only comp. We saw loads of flowy turns, some airs and even some barrel rides as twenty-four riders — both men and women — battled it out in frantic heats for the honours. With the fish fried and the tide dangerously low, it was time to retire to the Temple of Enthusiasm to await the final results and the epic wrap up party.

In the end, Harrison Roach won the men’s competition, and Rachel Tilly won the women’s with Nathan Monchet taking out the fish fry. 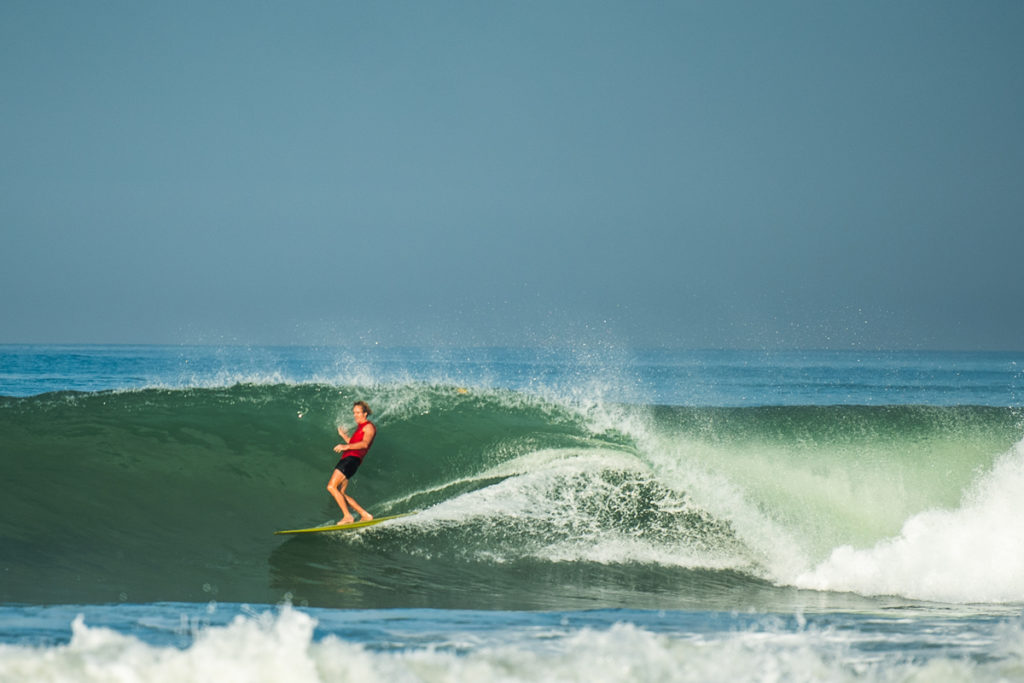