An Honest Review Of The Wave Bristol’s New Expert Settings

We went to the Wave Bristol to try out the new settings and answer to all your burning questions...

It was easy to forget, as I joined several dozen surfers frolicking in the sun at The Wave Bristol yesterday, that the country is currently in the throes of a mounting pandemic.

Sure there was the odd elbow bump in lieu of a handshake and the odd mutter about lockdown, but for the most part, sombre Corona chat was replaced by the excitable buzz of surfers breaking down the intricacies of the Wave’s new ‘expert settings’, which rolled through the shimmering pool from dawn till dusk.

I was joined by Cornish cruiser Mike Lay, who was coaxed up the A30 from his home near Land’s End by the promise of the newly available tubes.

To give him the best chance of getting in the blue burrow, Mike took the ‘expert’ slot, while I jumped in for the ‘advanced plus’ setting (the ones they’ve been running for the last 5 months on the smaller setting are simply called ‘advanced.’)

These new sessions comprise two new types of waves; T (which stands for turn) and B (which stands for barrel), with each increment of size and difficulty assigned a number, although it’s best to not get too bogged down in all that.

“There were a few locals out there speaking in code that I didn’t understand,” Mike explains, “asking if it was T2 or T3 for the first two sets, but the instructor was just like ‘we don’t need to get that technical.’”

Basically, the advance plus session begins on something just north of the existing advanced setting, then ramps up three times throughout the session. The expert session begins on the final setting of the advanced plus session, before also becoming larger and more hollow in three separate stages. While they don’t look wildly different in photos, we can assure you the new waves definitely have a lot more power when you’re up and riding (or getting rolled around on the inside.)

Each session serves up around 12 sets, offering punters a go at at least that many waves and up to twice that if you’re willing to sprint paddle back to the peak after each.

On the advanced plus setting the most noticeable shift, aside from the increase in size and power, is the change to the first section. The drop is definitely more critical than the previous setting, but the upshot is the eradication of the little flat bit that used to come straight after it. Instead of delaying your bottom turn or trying to nurse a cutty while you wait for it to wall up, you’re offered a much steeper, more powerful section straight away. 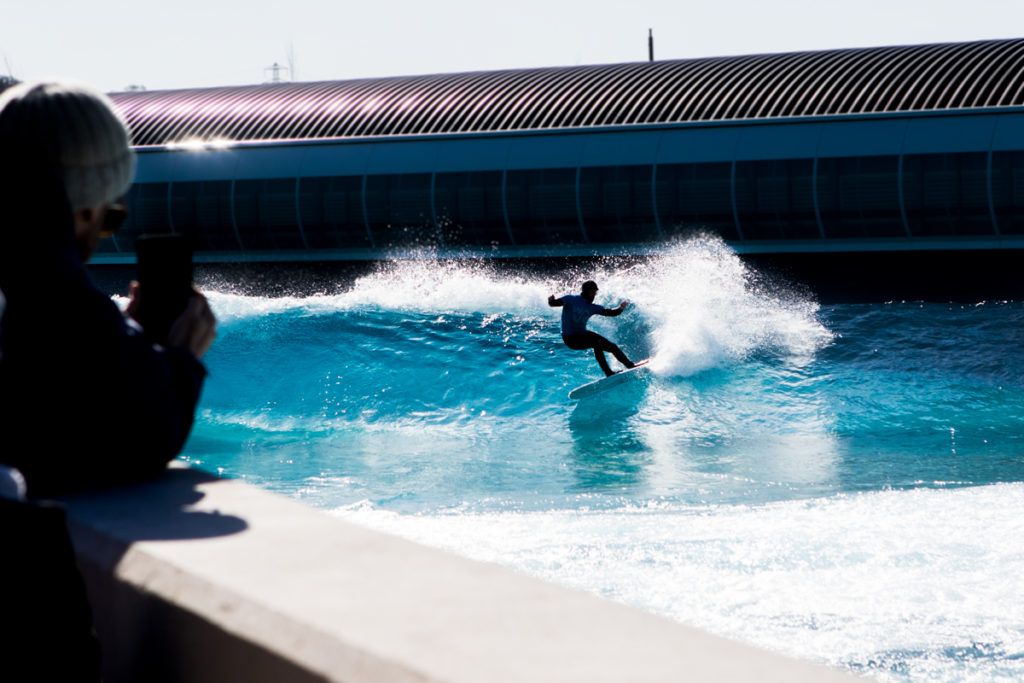 “I feel like I’ve seen videos of Lukas [Skinner] doing sushi flips off that first section,” says Mike, “But I decided not to do that. It’s just like a friendly wall, perfect for a high line pump then a cutback.”

“You’re aware you don’t want to push that first turn too hard, because it doesn’t want you to hit the white water,” he continues, “even on the early settings it bottoms out quite quickly after that first bit.”

This increase in difficulty does mean a few surfers who looked experienced when up on their feet struggled with the take-off initially, although it seemed to be more due to positioning than ability. The instructor provided some tips to those struggling, suggesting taking off a little further from the wall for reduced steepness and providing markers to show you where you should be paddling and popping up. 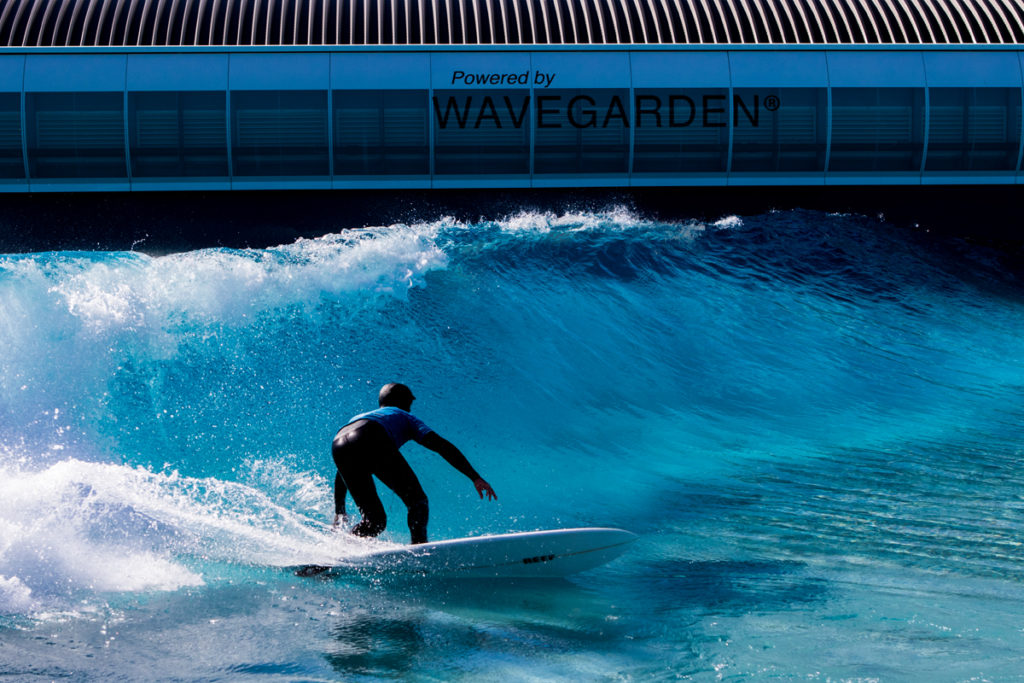 After the initial cutback section comes a steeper, bowlier section, which sometimes offers a little head dip on the advanced plus settings and a barrel on the expert. In each case though, every wave in the set is different to the ones before and after it, thanks to the way the water moves around the pool.

“On the turbo setting, I got tubed on the first wave and came out, so on the next one I thought ‘I’ll just stall here and get really tubed’ and then it didn’t even barrel,” says Mike. “Some of the barrels are tricky and some were easy and beautiful,” he summarises. 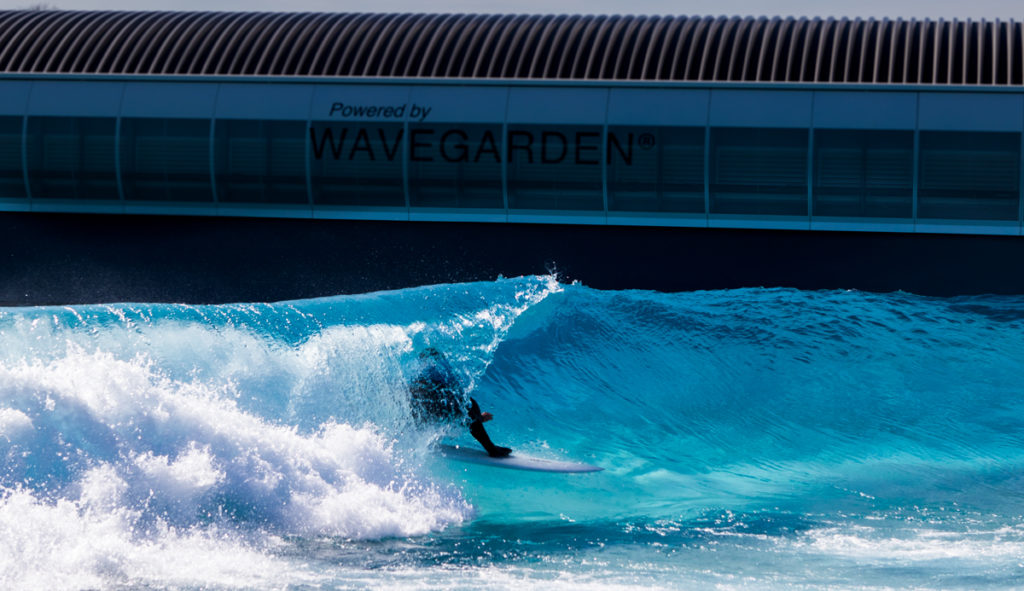 Although it’s hard to identify which waves in the set offer the best barrels, if there is a rhyme and reason to it, it’s probably the sort of thing you could get dialled into if you surf there all the time. Even if you’re not lucky enough to get a tubing wave every time though, the bigger, more powerful bowl is much better suited to practising turns than the previous smaller setting. 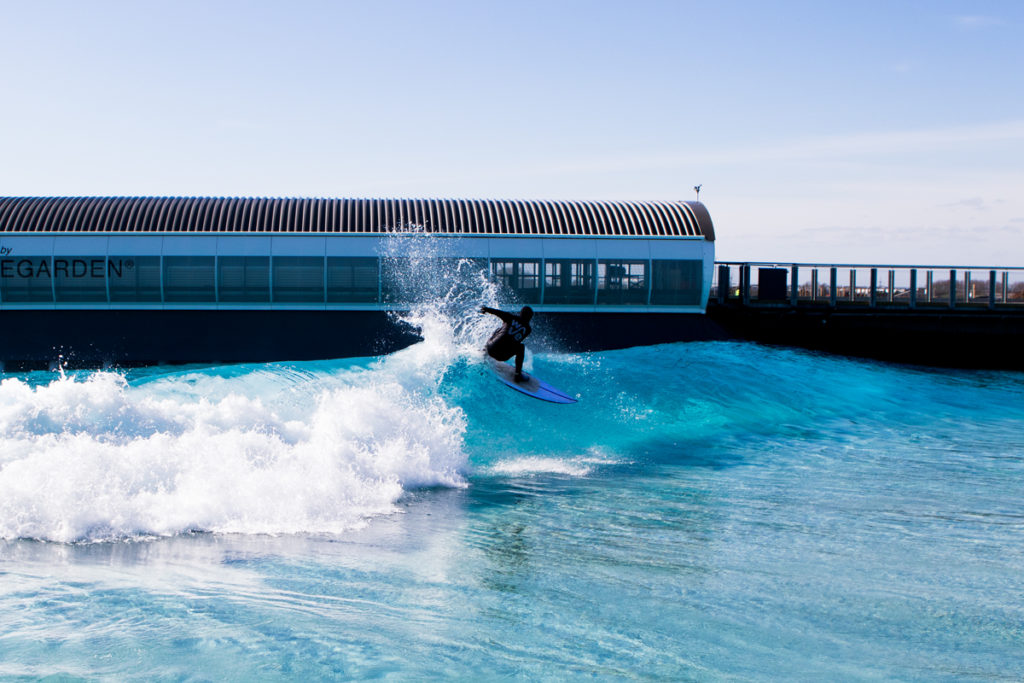 Mike was riding a 6’10 Bos surfboards twinnie, which he concedes had a lot more volume than he needed. “There’s a lot of energy going up the face for how big the barrel is,” he says, “so you feel you’re fighting against a lot of upward energy, which is trickier on a bigger board, whereas on a smaller board you could just sit on the fins more.”

Equally, I took my Fourth 7’2 egg in for the advanced plus session, having surfed the original setting and felt like any extra volume was a bonus. However, I too felt a little over-egged and reckon you’re better off with something that fits a bit more easily in the bowl. Put simply, bring the board you’d ride in a punchy 4-foot beachie. The craft of choice, if you’re keen to maximise time in the keg, is definitely a bodyboard. 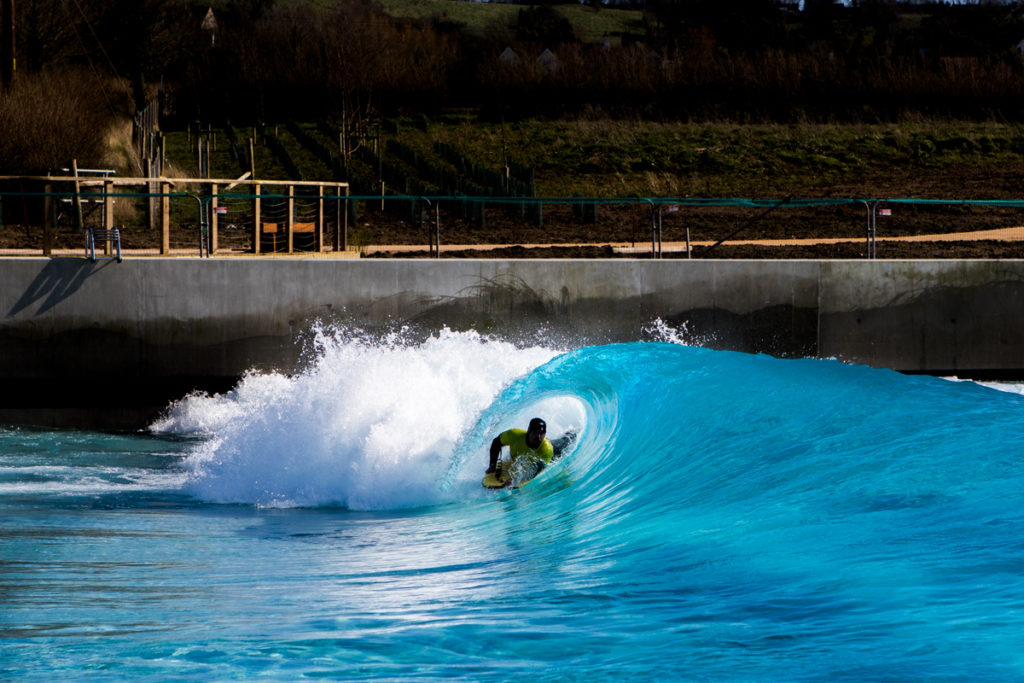 “How did that thing just spit its guts out!” Mike exclaimed as he sipped a beer after his surf in a sun-drenched spot overlooking the right. “That’s the best thing that’s happened today, a wave just spat in inland England!”

Spirits high, I broached the highly contentious question of pricing, asking Mike if he reckons the new settings are worth the revised cost of £45.00 per session.

“Most of the guys I was out there with were from Bristol and Wales,” he said. “They’d all surfed it a few times before and if I was in their position, living within an hour’s drive, I’d be spending £45 all day long. Living in Cornwall I won’t be back every weekend, but it’s the sort of thing that if I’m going up to London or the North, heaven forbid, I’d consider dropping in because I know you can have a good surf in Bristol now.” 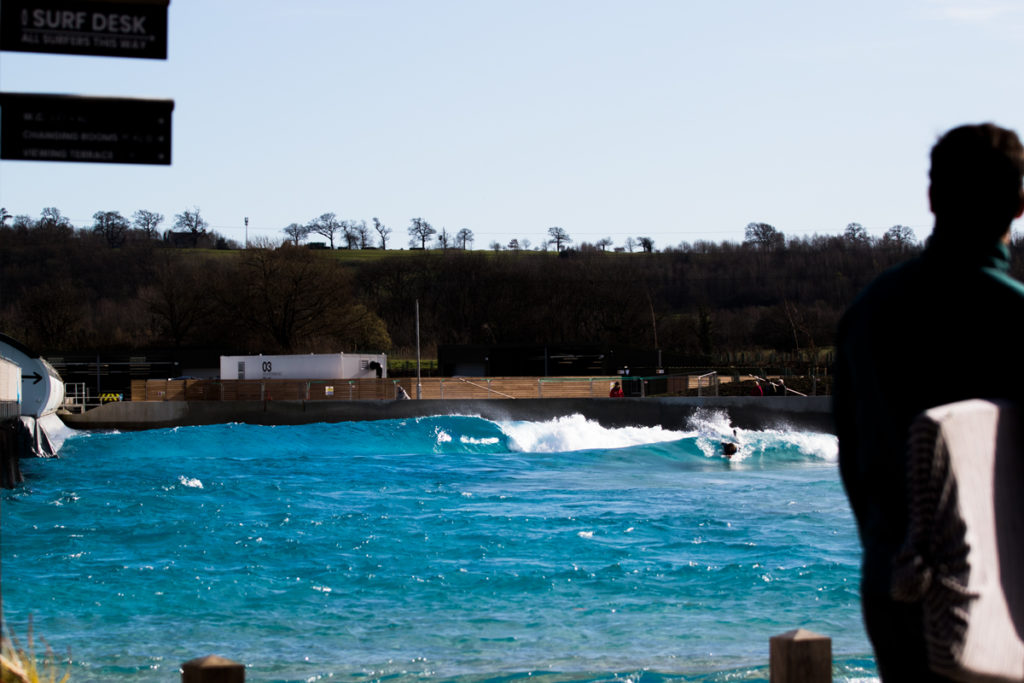 If you’ve got any questions about the new wave settings drop them in the comments. 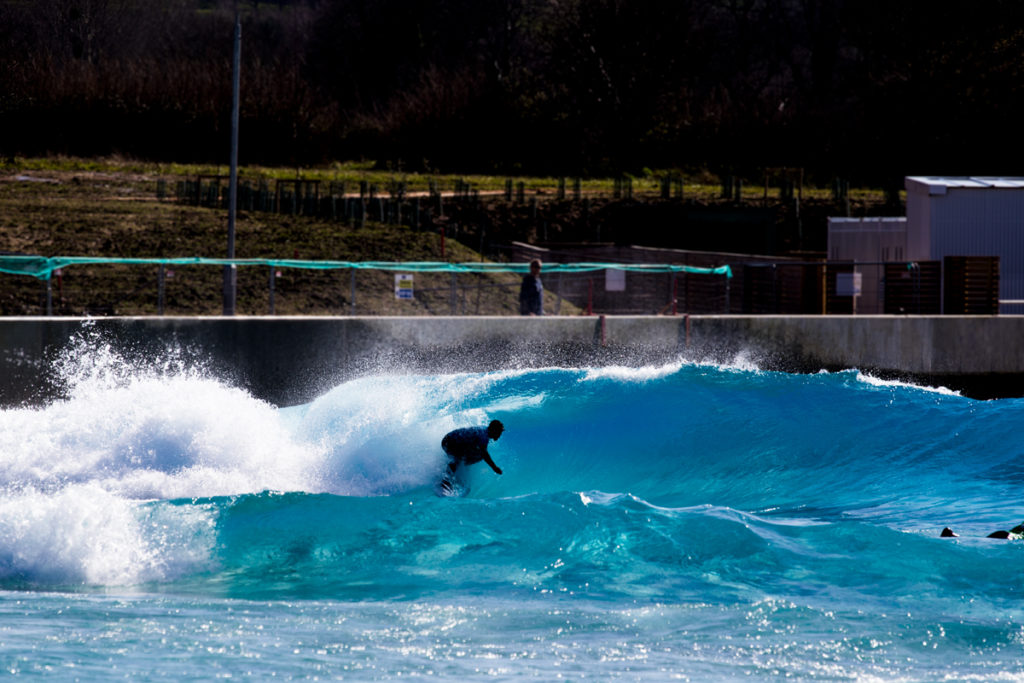