How To Get Your First Proper Barrel According To Three Of Britain’s Best Surfers We asked three of Britain's most prolific barrel hounds for some detailed advice on how to get properly kegged.

It’s a familiar scenario for the intermediate British surfer; you can take off and make steep drops, you have your bottom turn dialled and can generate speed, but you’re still waiting for that first proper tube.

You’ve had head dips and the odd vision, but you haven’t been properly shacked. In order to help you on your quest we hit up three of Britain’s most prolific barrel hounds to ask them for some pearls of wisdom on how to nab your first bazza.

“I started bodyboarding before I stood up,” begins Tom Lowe, “so pulling into closeouts was second nature to me. Bodysurfing also helps, with both you gain confidence of being washed underwater, wave knowledge and pulling in.”

The most important point, which was echoed throughout the guys’ advice was pick the right spot on the right day. “There’s no point paddling out with a mindset that your going to get barrelled if there just aren’t any on offer.” says Alan Stokes. “Even if it’s howling offshore, six foot and clean and looks a little hollow, if you’re in the UK the chances of you finding a tube, let alone trying to stuff yourself inside one, are pretty slim to say the least.” 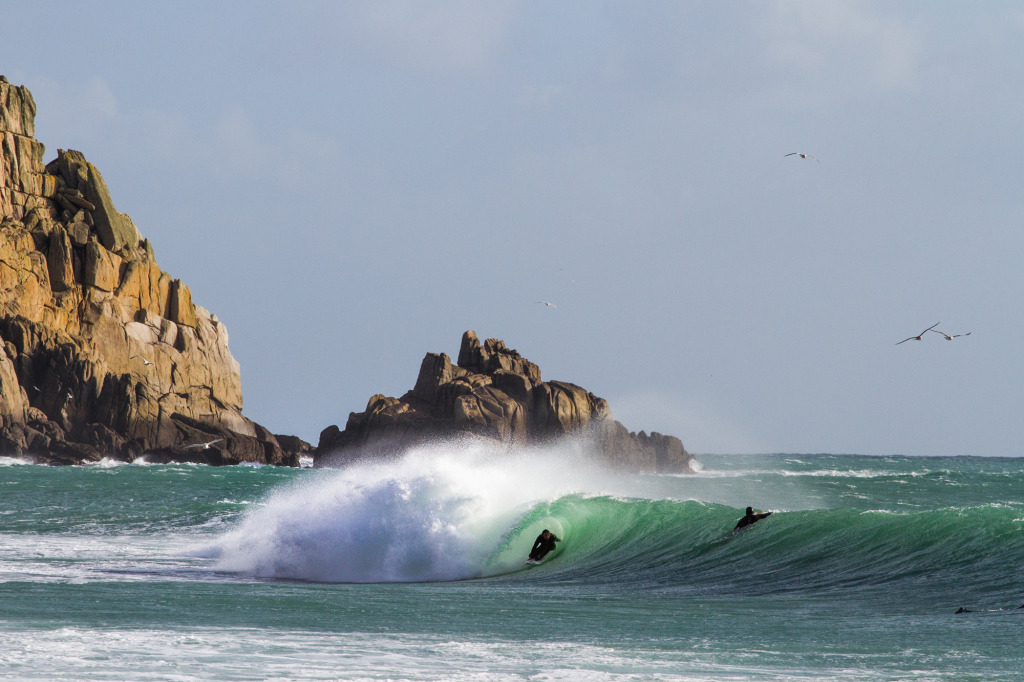 “The best place to find hollow beach break waves are where a left or right wedge forms. A wedge is a combination of ocean swell and the subsequent refraction of the last wave. When both waves meet they form an apex, the power and speed of the wave are increased, allowing the lip of the wave to throw much further, creating a hollow barreling wave.”

“Most beaches that have a good left or right wedge will usually have a large headland that continues to refract incoming swell lines across the beach. If the headland still refracts waves across the beach at low tide, this could be a great sign that there are some hollow wedges to be found. Your chances of getting barrelled anywhere are also greatly increased in offshore winds. In the UK the stronger the offshore the better.”

The further behind the apex or wedging part of the wave the easier it will be to set your rail get balanced and get tubed, once you are on your feet

Once you’ve found the spot, positioning yourself in the line up is also super important says Stokesy. “The best way to learn about a break is to spend some time just watching and studying how waves break and how water moves throughout the changing tide.

“Once you have pinpointed where the hollow waves are breaking consistently and at what tide, you can paddle out and work out the perfect place to position yourself in the lineup. Once you’ve found the spot, work out a reference for your position. Anything that allows you to know where you are in comparison to the breaking waves that you want to surf” 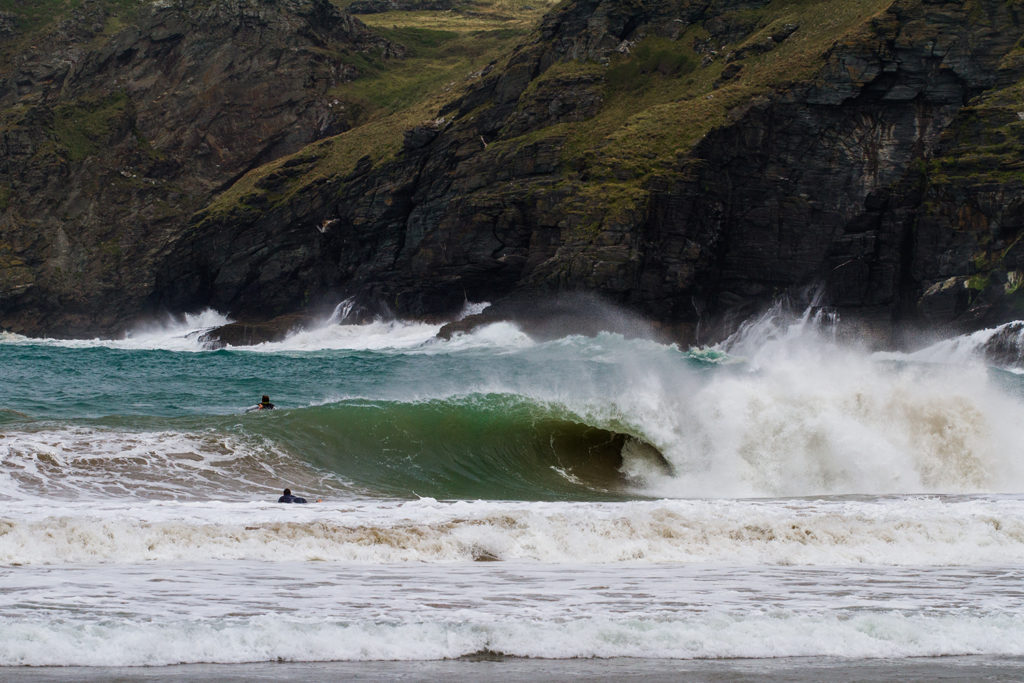 One of the south west’s heaviest wedges. Photo Luke Gartside

“Finding the right wave sounds simple enough,” elaborates Jobe Harriss “but the amount of people you see pulling into sections that aren’t hollow enough is unreal.

“The hollower the wave, the easier the barrel is to make (within reason that is, if there’s a Namibia style drainer, chances are people like you and I will be taking a trip over the falls). Make sure there’s a nice corner on the end too, you don’t want to be pulling in to too many closeouts, as we’ve all seen what can happen, just take a look at KS’s foot x-ray.”

“The further behind the apex or wedging part of the wave the easier it will be to set your rail get balanced and get tubed, once you are on your feet.” continues Stokesy.

“Try and catch the wave as early as you can with some big powerful strokes. Also angle your paddling so that you’re not facing the beach but almost looking along the beach, as if you’re chasing the wedge as it runs parallel to shore.

“Adding weight to your chest at this point to force the nose of the board down the wave face. Catching the wave earlier will give you that spilt second to readjust and wait for just the right moment to pop to your feet.”

“Once you’re up, it’s important to set your rail and pick the line you want to take through the tube, as you duck under the pitching lip. A nice smooth driving bottom turn, not too low or out in the flats, is perfect to sling shot you onto a mid face line, along the wave face.” continues Stokesy.

“You also need to read the wave’s pace,” says Jobe “if it’s racing down the line you need to put your foot on the throttle and try to match its speed. If it’s holding back a bit, stomp on the tail and slow yourself down to match the wave’s pace; matching its pace is key to finding your way out.

“The wave will either swallow you up if you’re too slow or you’ll be barrel stancing your way along the face of the wave in front of the bazza. In terms of the stance, this should come relatively instinctively, just get your body to fit what the wave is throwing at you.”

“Put the time in and practice, soon enough all those closeouts will pay off when you pull up at a perfect reef somewhere and get shacked off your melon!”

“When you jump to your feet try to land with your foot positioning slightly further forward than normal and also slightly over to the rail edge that is engaged in the wave.” add Stokesy

“This helps keep your rail for slipping, as you enter the steeper part of the wave. Add a little more weight to your front foot than the back foot, but be sure to keep the fins engaged. Now begin to lift your head raising your front leading arm out in front of you.

“At this point you should be just coming in under the lip with the tube and tube exit stretched out in front of you. Using your leading arm, point and look at the tube exit, maintaining a solid stance with your weight still slightly pushing on the front foot and inside rail.” 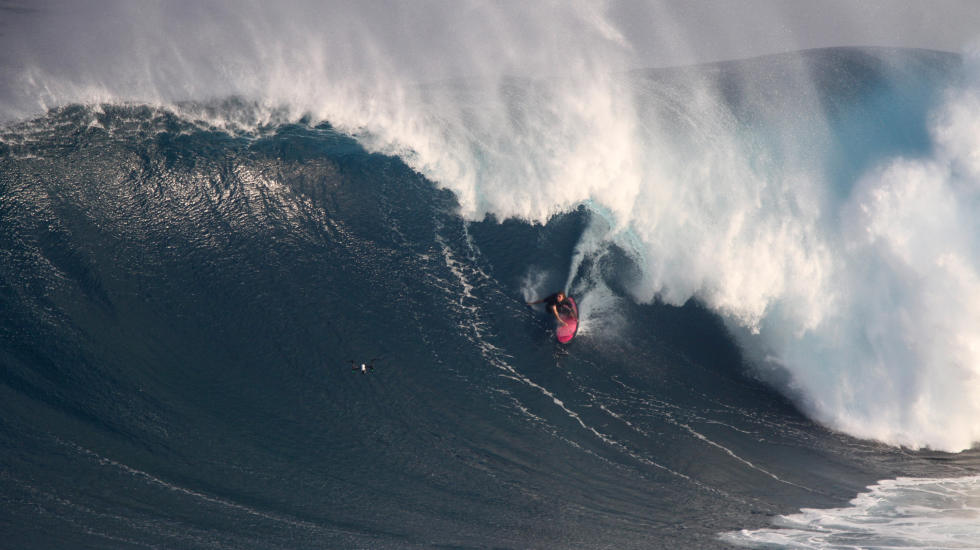 “When you’re in the barrel, keep your eyes open!” says Jobe “It sounds stupid, but I closed my eyes whenever I got into a barrel for years and it doesn’t get you very far. If you’ve got your eyes open, just hold your line and the wave will do the work, don’t try any movements or anything to start with, just hold that rail and you’ll find your way out.”

“Visualisation is powerful too, I do it a lot in big wave surfing, imagine and feel it as if it’s happened. More often than not, it soon unfolds.” adds Lowey.

“Most of the time, just as you’re about to come out of a barrel and you think you have made it, a big weird lip smacks you in the head,” says Stokesy of exit strategies.

“Or the wave suddenly pinches shut. So brace for impact, legs strong, eyes looking straight ahead, knowing that at any moment you could get knocked off your board.”

“Put the time in and practice, soon enough all those closeouts will pay off when you pull up at a perfect reef somewhere and get shacked off your melon!” summarises Lowey.

“And hopefully your mates in the beach car park see it” adds Stokesy “and are hooting their car horns at your triumphant prowess. Turn around and take a bow like Big Z, you’ve earned it.”