London based surfers: Head down to 71A gallery tomorrow for an exhibition of iconic surf imagery, hosted by Huck and Rob Machado, featuring work by Steve Sherman, Todd Glaser & Art Brewer.

To celebrate the release of the Momentum Generation, Huck, along with Rob Machado, will be hosting a pop-up photo exhibition this weekend in London, featuring iconic images by Steve Sherman, Todd Glaser and Art Brewer.

Here’s what they had to say about the pop-up:

Taylor Steele’s //Momentum// series of films were for us a dispatch from surfing’s Holy Land. And the tight cadre of impossibly talented, preposterously privileged, infuriatingly pretty young surfers that made up the cast were blessed apostles whose fate it was to ride the most radical waves on the planet in the most progressive fashion imaginable. It was all put together with that driving soundtrack that perfectly punctuated the schwacks and the punts. If you were left feeling like an outsider, as you watched Todd Chesser slide into that cavernous Backdoor barrel, it was understandable. Especially from the perspective of Britain’s gloomy, piddly waved latitudes.

From that gilt edged upbringing on the edge of waters which threw and pitched and ramped into our dreams, the Momentum generation sprouted from an extended and riotous slumber party on the North Shore to every VHS player in every scuzzy surf shack in the known surf universe. There was of course all the complexity of any life, any relationship, moving on apace in their personal lives and between each of them. But we never thought about that as they pulled into barrel after barrel and busted air after air. From our perspective things were pretty simple. We envied these guys. We wanted to be them. We tried to surf like them. We failed.

But the underlying differences and the contradictions in this seemingly one-dimensional crew expressed itself in time. So many of these individuals emerged to define a distinct corner of surf culture. Rob Machado grew his hair, became an acolyte of the single fin and the twin keel and swooped and crouched beyond the Tour’s confines and deep into surfing’s soul. Shane Dorian became defined by cojones and commitment to chasing rhinos. Taylor Knox and so many more of these kids grabbed a foothold as permanent fixture in the top 44 and in the campaigns that flogged us our barely worn board shorts, steadfast in the certainty that in any conditions and in any continent, they would get more waves than you and chuckle at you whilst they dropped in.

King Kelly, of course, went on to become the Greatest Of All Time, the champ’s image in our eyes waxing and waning from gee-whizz celeb golden boy to cryptic enigma and freak of nature. He became for us surfing’s shaman-next-door, a man whose athletic brilliance reminding us implicitly that this surfing game, the one he had mastered like no other, really was the sport of kings and queens.

Over the years, we have been lucky enough to have rubbed shoulders with the members of the film’s original cast, and been able to share our perspective on what made this generation so special. For this pop up show we drew together a short edit of our favourite images from our favourite photographers.

The Momentum generation lived lives we could only dream of. But in doing so they inspired us to live our own unique versions of that impossible dream. And for that we are forever grateful.

With special thanks to Art Brewer, Todd Glaser, Guy Martin and Steve Sherman. 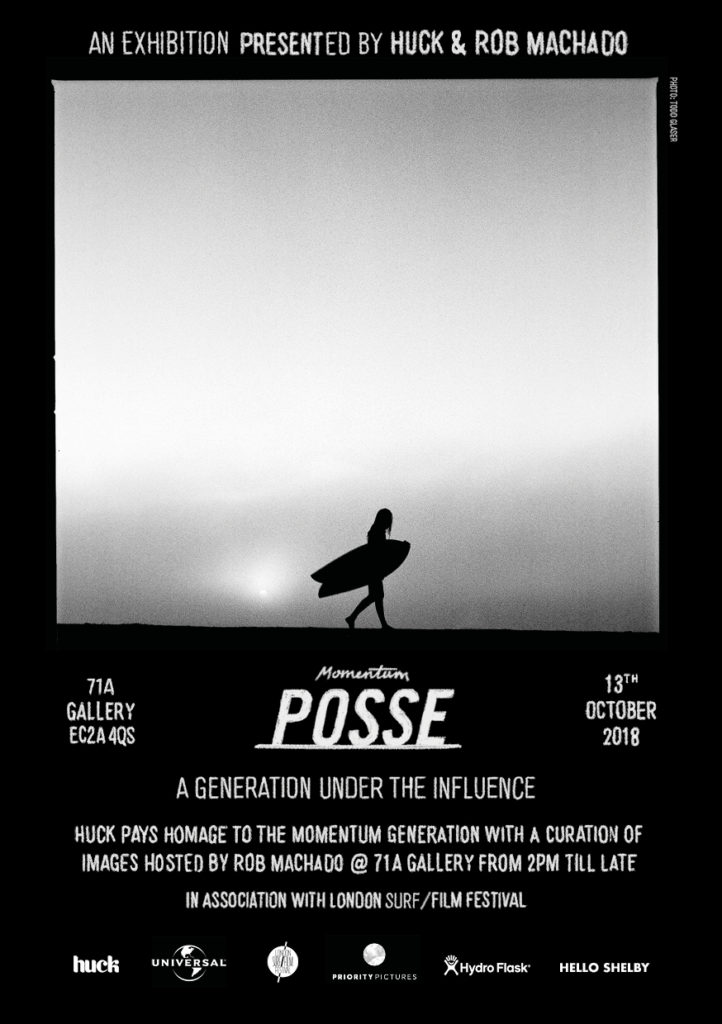 The film will premiere at the London Surf Film Festival tonight, before being taken around the country on our UK tour. Tickets are selling fast, grab yours now to avoid missing out!