Home » WATCH: Imani Wilmot Is Transforming The Lives Of Jamaican Women Through Surfing

WATCH: Imani Wilmot Is Transforming The Lives Of Jamaican Women Through Surfing Watch the winner of Best British Surf Film 2018, plus, read an interview with the project’s Cornwall based directors.

The documentary tells the story of Imani Wilmot and her efforts to transform the lives of Afro-Carribean women through surfing. It was created, in collaboration with Imani, who is herself a filmmaker, by Cornwall based production company The Right To Roam, made up of duo Joya Berrow and Lucy Jane.


Joya and Lucy grew up in Dorset and Wales respectively, in rural settings fringed by the sea, spawning a love for the natural world that has formed the basis of their filmmaking. Their first major project ‘Away With The Land’ focussed on a Scottish crofter, who has dedicated his life to an eighteenth-century farming tradition in symbiosis with the soil. Then, last autumn they released  ‘Every True Person Of Kalofer Without Freedom Can’t Live’ which documented the annual harvest in a Bulgarian rose valley. Each presents a careful consideration of how communities and individuals are shaped by their unique interactions with the natural world.

Earlier this week we caught up with the pair to talk about their goals for their new film, the lack of diversity in mainstream surf media and the abundance of interesting stories in developing surf cultures.

What do you hope to inspire through your films and filmmaking philosophies?

L: I would say that our mission is based on the principle that nature is a therapy, and we feel that filmmaking is a medium that can challenge how removed people have become from it. We think nature should be accessible to everybody, but it’s not, and we want to use film to try and do something about that.

In the context of this particular film, we’re both surfers, and the genre of surf film is one I’ve loved and wanted to explore for a long time. With this project, we see a space to use the film as a tool to send out a strong message to the surf community.

Tell me how you met Imani and the female surfers of Jamaica.

L: We’d just been in South America for nine months in 2017, where one day we found ourselves filming the Colombian national surf championships for a hostel company. While at the event, we realised there was a massive community of surfers around the world who were being completely ignored by the mainstream surf media. I was looking online and thinking surely there must be something we can do to bring this situation to light and eventually I found an article about Imani.

When I found out about her work I thought this needs to be told, it could positively impact and inspire so many people. For me what she’s doing is the blueprint for how one person can make a difference to the people around them, but also the global industry, and that’s one thing we all need to remember; that it’s worth doing whatever we need do to make a change, because it’s possible when you set your mind to it!

Can you tell us a bit about the Jamaican surf scene?

L: The Jamaican surf scene is small and they are a very strong community. There’s no surf shops or commercialised elements of the industry yet. It’s just the strength of the Wilmot family, who have set up the Jamaican Surfing Association and surfing competitions like the Makka Pro. They have managed to reach out to people and get a quiver of a couple hundred boards, which are held at the Jamnesia Surf Camp and anyone can have access to. Imani, her brothers and extended family all offer classes at no cost to some and a greatly subsided rate to others, because they see the value of empowering the locals to get into surfing. 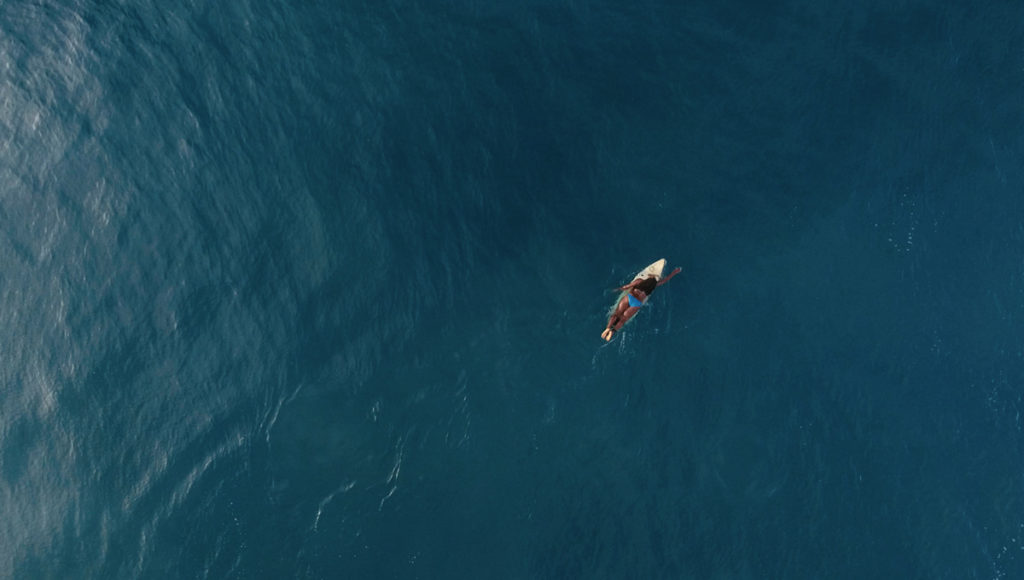 In a lot of places where there is a big established surf scene, people romanticise the days before it existed. Did you get the sense in Colombia / Jamaica they are rushing towards that without thinking about what they might be giving up?

L: They totally love and value how it is now, and when they competed internationally, people admired the Jamaican team because they had a completely different way of being, where they are very humble in their approach to competitions. That’s the unique energy they have passed on and built within their surf community. However, there’s always the other side, which is that it’s much more difficult to make a living out of surfing when based in a more remote surf community such as Jamaica.

“For me what she’s doing is the blueprint for how one person can make a difference to the people around them, but also the global industry, and that’s one thing we all need to remember; that it’s worth doing whatever we need do to make a change.”

Do you feel that brands have a responsibility to represent more than just a narrow slither of elite level surfers in their marketing campaigns, or is that asking too much of them as commercial entities essentially just focussed on selling product?

L: Absolutely they have a glaring responsibility and it’s essentially at their own loss because they’re missing out on a massive audience. If all we’re talking about is money making, then by completely ignoring a whole community of people in their advertising, they are losing business. Most importantly, there’s a necessary and increasing pressure on brands to show a major level of social responsibility and I think as consumers we’re much more interested in buying from brands who demonstrate that. So why not be that first brand to show an interest in portraying a diverse array of surfing athletes?

“I think surfing helped to liberate me and help me gain back some level of oneness with myself,” says Mel, one of the women Imani encouraged into the water for the first time. Frame: @therighttoroamfilms

Generally, the people who brands look to sign are either competitively successful or have already built up their own massive followings on social media. Do you think that could be an empowering tool for people in these developing surf communities?

J: I think it’s quite unrealistic to think that’s going to work out in these situations. You need a combination of forces working together to achieve sponsorship, to travel to the competitions and get the spotlight. It’s something that would take huge amounts of dedication to do this alone, especially when you are struggling to identify and see role models for yourself within the global surf industry.

L: A great example of someone who has dedicated themselves to using social media as a tool to make the change that they want to see in the world of surfing is Rhonda Harper founder of  Black Girls Surf. The organisation runs an empowerment and development surf camp for Black girls wanting to pursue professional surfing. She has had to invest her life savings into supporting these athletes to make it work and that is not sustainable.

Hopefully, the film will connect more surfers to filmmakers, who will also see more of their responsibility as visual creators and the role they can take in this argument. New visuals open new doors!

“Teaching your kids to surf is a special thing.” wrote Billy Wilmot in an article in Surfer mag. “You know how much they’re going to enjoy the first time they stand up and you’re going to be the one who gave them that experience. That’s a special feeling, knowing that you’re the one who showed them what surfing is.” Frame: @therighttoroamfilms

Do you think there’s anything unique to surfing that made it particularly empowering for the women in the film?

L: Billy Wilmot, Imani’s father says, when you surf, your eyes are taken from whatever they’re being distracted by – the noise, corruption, discrimination, or general daily setbacks – and turns you towards the horizon. This horizon is open, and it’s a space where anything is possible.

J: These women cross a boundary when they pass from land to sea. A space where they can go and look into themselves, removed from the burden of the negative impact of the Jamaican patriarchy. They are alone, with a powerful sisterhood in tow, paddling towards the horizon, overcoming fear and looking towards infinite possibility.