Home » The Inside Scoop On China’s Olympics Surfing Programme

The Inside Scoop On China’s Olympics Surfing Programme

The Far East doesn't just want to make your surf gear. It wants to use it, too.

It’s 6am at Riyuewan – Sun and Moon Bay, Wanning, China.

A full moon shimmers off the surface of rockpools in the exposed reef a few hundred metres offshore, a reef that provides reeling, fun, if not life-changing lefthanders under consistent, clean wind swells off the South China Sea.

Bizarrely, from the current low watermark, the tide will flood in at varying rates before reaching high water in some sixteen hours time, before ebbing again for a mere eight.

But the tidal curve isn’t the only unusual thing about the place.

Located a 21 degrees N – the same latitude as Hawaii – it’s already hot and sticky in the pre-dawn. Aside from the constant whoosh of traffic on the highway, the only other sound is the rhythmic footfall of a group of two dozen kids out for a morning run.

With some as young as 8-years-old (lagging back a bit, understandably), the kids are part of China’s Olympic surf training program. After the run and a group yoga/stretching session, they’ll be surfing all day in the beachbreak out the front with coaches, before analysing images from their sessions.

Then the same program repeats all week, before time off at the weekend, which invariably also involves surfing. 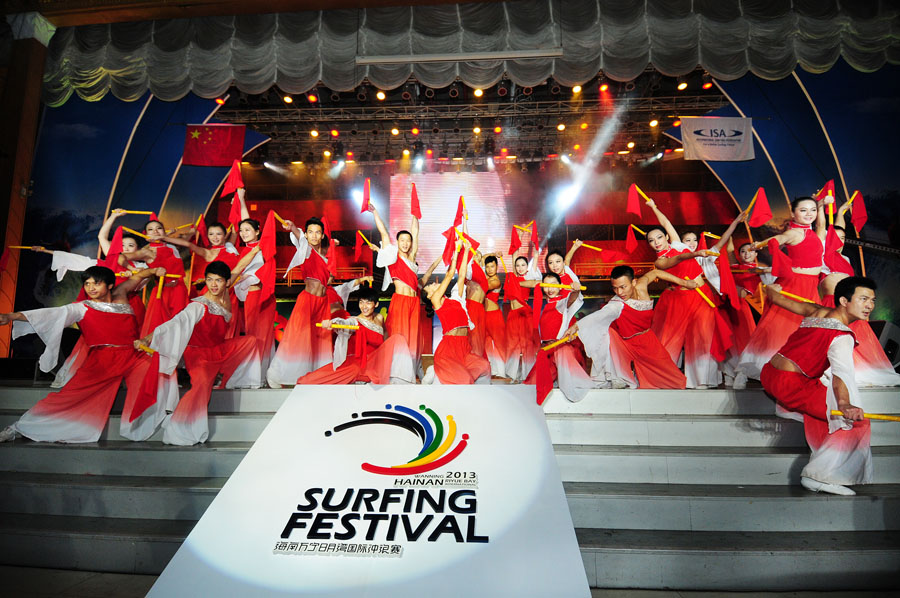 The opening of the Hainan Surfing Festival. Photo ISA/ Tweddle

These are just the sixty or so that happen to be billeted here behind the break at Riyuewan. In a couple of hours, four large coaches will hiss into the lane outside the newly built high-performance centre, all loaded with surf cadets staying in inland towns.

They come from all over China, selected by province. These provinces might be entirely landlocked, like Guizhou or Sichuan, in fact, some of the kids’ first time ever seeing the ocean was upon arrival at the residential training program set up to turn them into Olympic level surfers.

One western ex-pat formerly involved in the program tells me that some of the kids might have finished just outside the top 50 in national swimming age groups, and were persuaded to give up the pool to join the surf program.

“Some kids had never even swam before, nor showed any prior affinity for water sports, but their parents had been convinced to send them away to the surf program in return for payments”

Another tells me that some kids had never even swam before, nor showed any prior affinity for water sports, but their parents had been convinced to send them to the surf program in return for payments made to them to fill regional quotients.

“Some of the families are really poor, maybe they can’t afford to send their kids to school even. Sending them away to learn to surf can be a life-changer.”

You may have seen footage of the Chinese version of Slater’s Surf Ranch, which was made after a handful of Chinese officials visited the Lemoore facility (requesting to see the foil and machinery, unsuccessfully), but took enough pictures and notes in order for Chinese engineers, famed for their ability to replicate technological innovations from sight, to build a similar facility in Quinfeng.

Although beset by structural issues and currently non-operational, the pool was used to host a regional championships in early 2019 in 600m long waves, and it won’t be too much of a stretch to expect a newer, bigger facility to be online before too long. Funding, for the time being at least, appears not to be a problem.

With the likes of Peter ‘PT’ Townend and Ian Cairns on the payroll as surf coaches, as well as plenty of other Aussie surf coaches who roll in and out of town on shift contracts, all the ingredients are there to develop surf talent at the highest level.

With Bali a couple of hour’s flight away from the national centre in Hainan, and consistent Pacific surf in Taiwan and the Philippines even closer, the travel opportunities for Chinese surfers to develop mean their training grounds extend far beyond wavepools and windswells.

On any given day at the beachbreak at Riyue, scores of groms are wiggling down the line on epoxy Merricks, Chilis and Losts (which, incidentally come from factories in Thailand, much closer to Riyue than your local).

Meanwhile, a mini hipster longboard movement – a legacy of the Swatch Girls ASP Longboard events in the early 2010’s – sees several toes over on every set. The standard is higher than you’d expect, and getting better by the day.

Bearing in mind all this comes from a standard start of zero surf culture a decade ago, the trajectory is clear to see.

‘Alex’ Qiu Zhuo, 16-year-old goofyfoot and Hainan local made history this January by making Round 2 in the Corona Open China QS5000 and currently sits at =25th (albeit after only one event) on the QS.

As long as the funding continues (and surfing stays in the Olympics) Alex and his peer group could soon be the rule, rather than the exception. And it’s not just homegrown talent, but Chinese global diaspora too who could help bring on the world’s most populous nation’s surfing fortunes.

Zeke Lau is rumoured to have turned down a recent offer to take Chinese citizenship in order to try and qualify for the Olympics for China. For the right price, it’s not hard to imagine a CT surfer with Chinese heritage to make the nationality switch, as many already have to other Olympic hopeful nations. 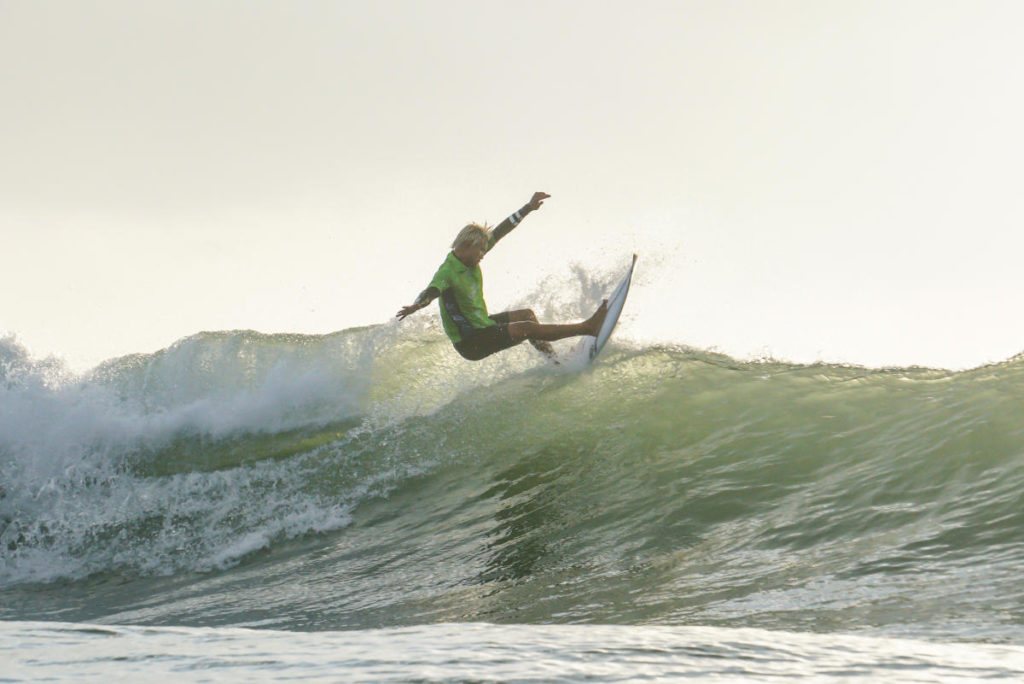 While talent development programs associated with communist countries or autocratic one-party states might smack as particularly unsavoury with sports like surfing, it’s one of the things that goes along with the Olympic status we’ve courted and coveted for so long. It is essentially an aquatic form of gymnastics and will be treated as such by authorities hoping to accrue medals on the world’s biggest sporting stages.

Sending primary school kids – some of whom don’t apparently even enjoy surfing – thousands of miles from home, in order to train as surfers, mightn’t be exactly what The Duke had in mind when he went about sharing the global stoke, and might well offer a new kind of perceived moral high ground for surfing’s traditional xenophobes to sneer down from when Brazilians are no longer a legit target for keyboard warrior intolerance.

On my last day in China, I’m out on the peak with a ten-year-old grom from Sechuan called Mumu. The most talented surfer in the current crop of any age group, Mumu speaks enough English for a classic grom personality to come across. If you can’t help but think the talent development program seems a touch sinister, as many do, Mumu puts a thoroughly human touch to it that you can’t help but being stoked about.

He laughs that his puppy fat is keeping him warm against the brisk offshore (‘it’s my wetsuit’ he quips, grabbing his belly) and tells me his favourite surfer is John John. He eases into a sucky 2ft left (head high for him) and smashes a series of fins out lip blasts with style and a giggle all the way to the end of the point. He’s as good as any 10 year old surfer I’ve ever seen.

While surf fans wonder whether Kanoa, John John or Italo will win gold in Tokyo 2020, or indeed Teahupoo 2024, the real legacy of surfing’s Olympic inclusion, rather than the furthering the personal wealth and fame of a handful of already lauded athletes via top-down marketing, could the true globalisation of the wave-riding via bottom-up inclusion from countries whose previous role was restricted to providing cheap manufacturing labour for our gear.

Geopolitics and sports-washing aside, or whatever other misgivings you might have about the program that’s currently creating surfers like Mumu, there’s no denying that elite surfing at least, could be much more diverse.

If surfing’s traditional lifestyle, born in the 1950’s represents peak white privilege, in the 21st century, the IOC and recent collaborator ISA have designs on bringing it much closer to The Duke’s global vision.