Few understand the intricacies of UK waves better than Alan Stokes and now he’s put that expansive knowledge into designing a new range of boards geared up to drawing unique lines, maximising speed and having as much fun as possible.

For the last year, British surfing veteran Alan Stokes has been working on an entirely new range of boards, each geared towards drawing their own unique lines, with an emphasis on speed and glide.

Throughout his 20 year career Stokesy has always experimented with different boards, but the last half decade has seen him dive head first into the world of esoteric craft. Through working closely with his long term shaper and studying the nuances of board design and how they translate into wave riding, Stokesy has built up the knowledge required to conceptualise his very own range.

We caught up with him, as he touched down from a winter away in Costa Rica testing out his new shapes, to find out more: 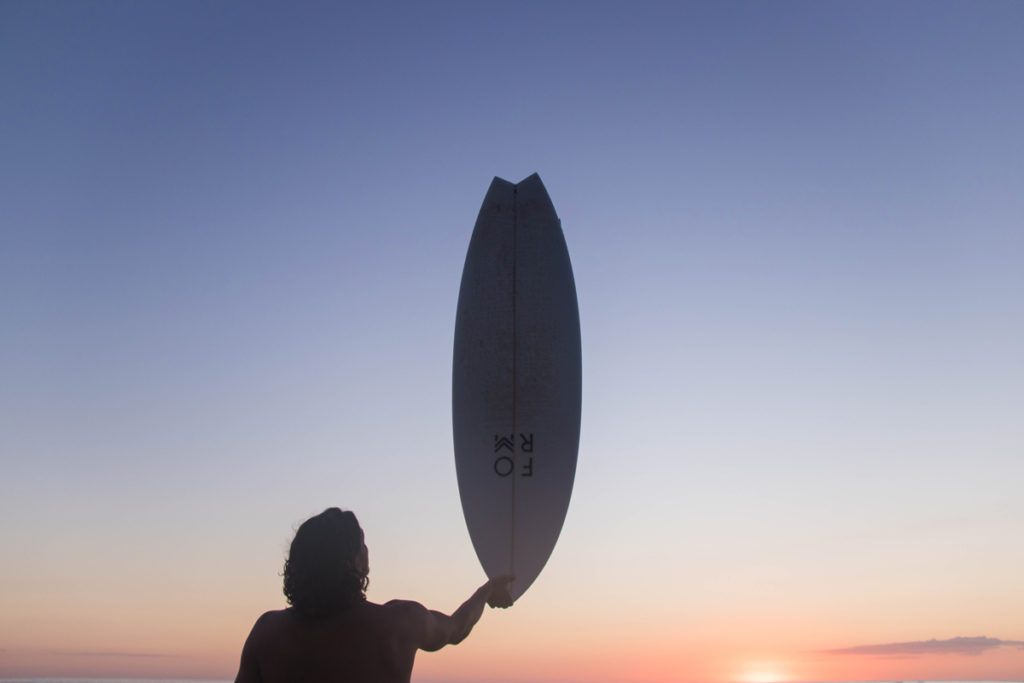 Hey Stokesy, can you tell me from the beginning how the new range of boards came about?

For the last few years I’ve been experimenting with so many shapes and concepts, right the way up from the Stoke-a-pop, which was a 5’3 originally, to longboards, hydrofoils and the whole twin fin thing recently. It got to the point where I went up to the factory, and ordered a 6’3 pin-tail gun, fairly full outlined with a channel bottom and keel fins.

I was a bit over paddling out at Fistral on my 5’11 step-up, because I just knew I wasn’t going as fast as I could, and the whole twin fin thing has really switched me on to the fact that the funnest thing about surfing is the speed, and if you carry that into a turn, or an air then that feels good. Initially though, you want to be going as quick as possible, with as little effort as possible. I wanted to make that work in bigger surf so I figured, just stretch the outline of my twin fin out, get some channels in there for control at ridiculously high speed and the keel fins for smooth rail transition. 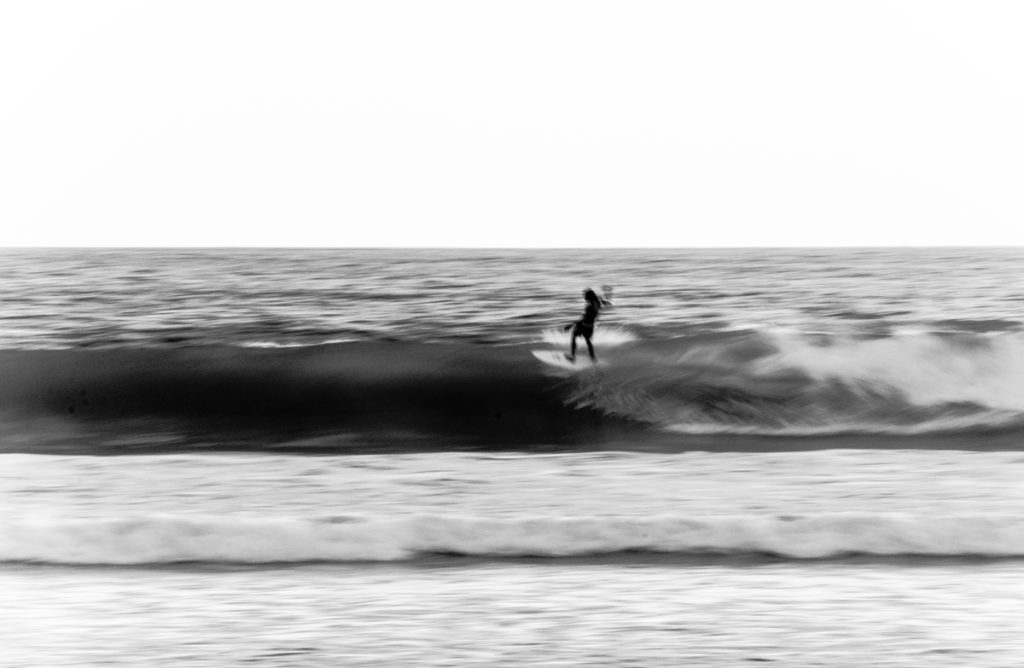 Can you elaborate on the benefits of keel fins in a set up like that?

They let you keep speed through the arc, they allow you a seamless flowing feel from take off till the end of your ride, because you haven’t got a rail that is trying to dive. The thing with a thruster is that you’re essentially pivoting quite quickly so that instant direction change is quite extreme, so the chances of that rail catching chop or wanting to dive are quite high, whereas with a twin fin you’re essentially skimming. And If you get the shape right and the rails right, with the right fin combo you end up with a twin fin you can actually surf really progressively, with big carving hacks. And you can still have an air game, so you feel like you’re almost getting everything that a thruster can give you. 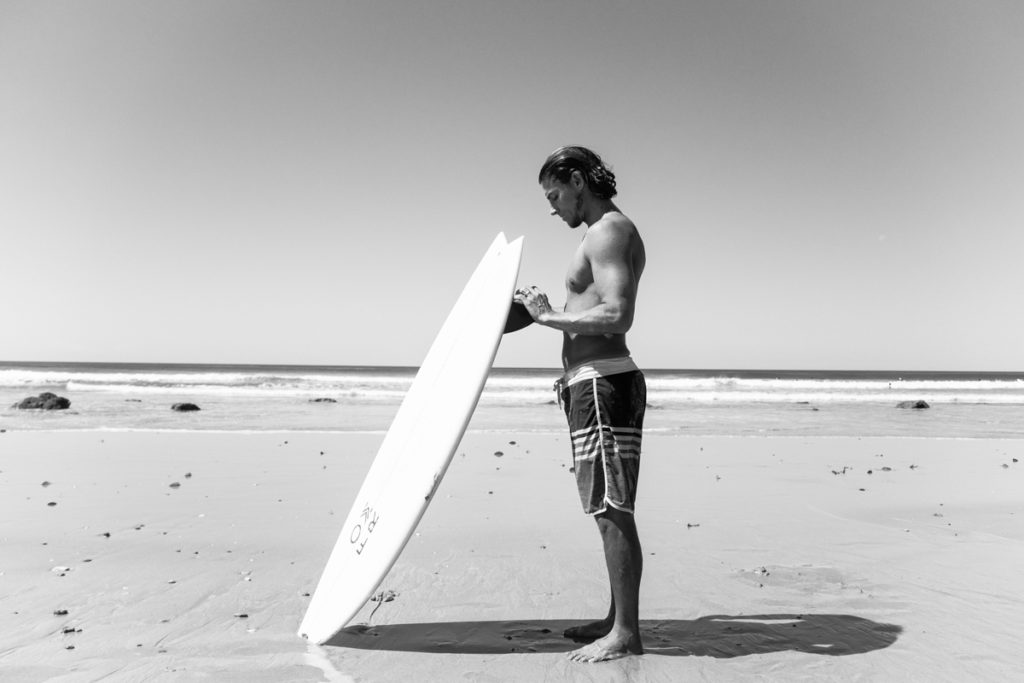 The ADPT with the twin fins in. Photo Philly Stokes

How did you develop this passion for technical experimentation with board design?

Well I’ve always experimented, but it really came when I decided I wasn’t concentrating on comps anymore. That gave me the ability to surf anything, because I wasn’t worried about whether it would be detrimental to me in a heat. Because it is weird transitioning between boards before an event. I’d want to jump back on a thruster and have a good week getting back tuned in before a comp, but I just lost that need to prove myself on a thruster, and feel like I was in tune with one just to go into a twenty minute heat. Instead I want boards that are going to perfectly suit the conditions.

I wanted that 6’3 gun for big 6ft Fistral where there’s barrels and a lot of quite full open face. There’s only a very small turning pocket at Fistral where it’s critical, other than that you’re basically out in no mans land going very fast, so I just felt like a twinny step up gunny board would draw a better line. 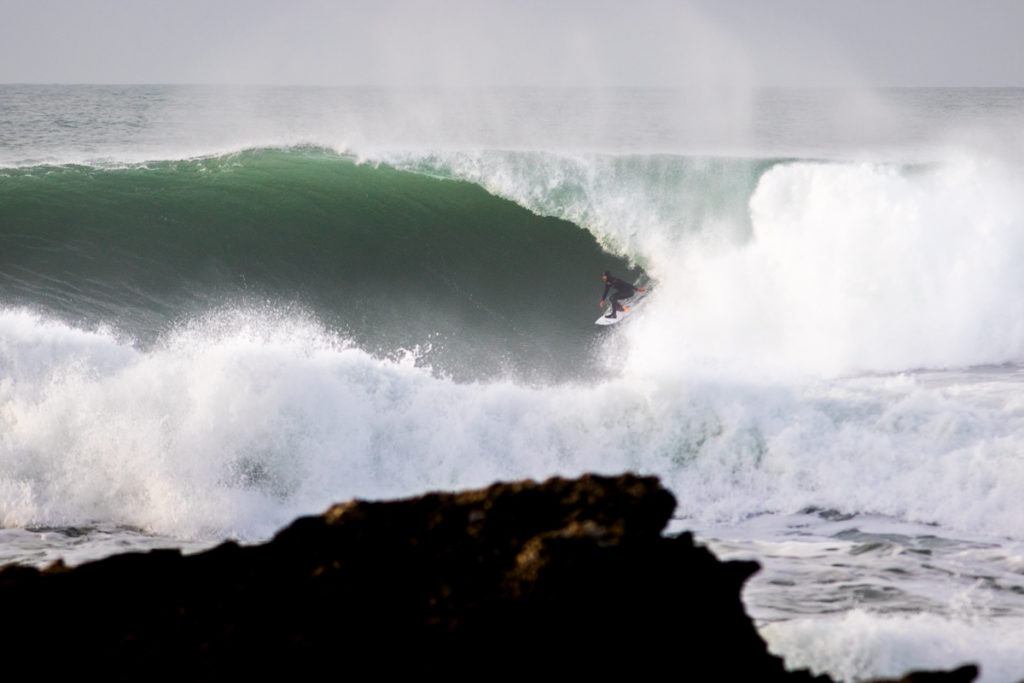 Stokesy flies down the line on a bomb at Fistral. Photo Luke Gartside

When Fistral is 6ft plus, you’re not throwing airs and stuff, there’s too much water moving, you’re just getting bucked everywhere, so you ask what are the conditions best for? Get in behind the peak, get barrelled, try a big hack. If you try to do airs you end up with a pretty pants surf, that’s UK waves in a nutshell; you’ve got to gear your surf and what you want to achieve to the conditions, you can’t just paddle out and say ‘I’m going to do this’. 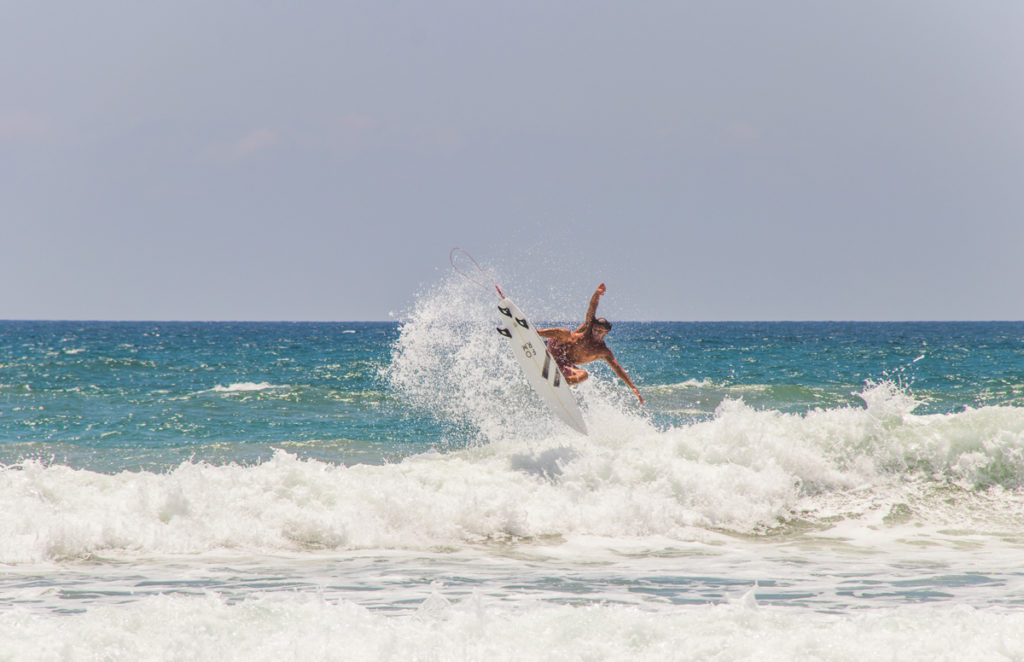 Throwing the tail on the GOTO. Photo Philly Stokes

So the shift was all about adapting to conditions and basically trying to have more fun?

Yea exactly, before that I got to a stage where I was just constantly trying backflips on my shortboard and I started to question how many hours I was wasting on this vision, because I’d got half way there on this one section one day and it had kick-started this motivation to land one. You spend hours and hours trying this stuff, literally not doing a turn for a whole surf, just racing along a wave, finding a section and getting kind of midway there. It was fun to a point, but there’s much more to surfing than that. I had a similar realisation with competing.

When you start winning, that becomes the thing that you do, and it’s an egotistical thing, but you’re geared up and your motivation is to win stuff and succeed, so you’re always chasing that. One day I realised no one really cared apart from me, and I said to myself: ‘Do I even care that much? Maybe I can have way more fun than this.’ So that’s when I started experimenting with boards. 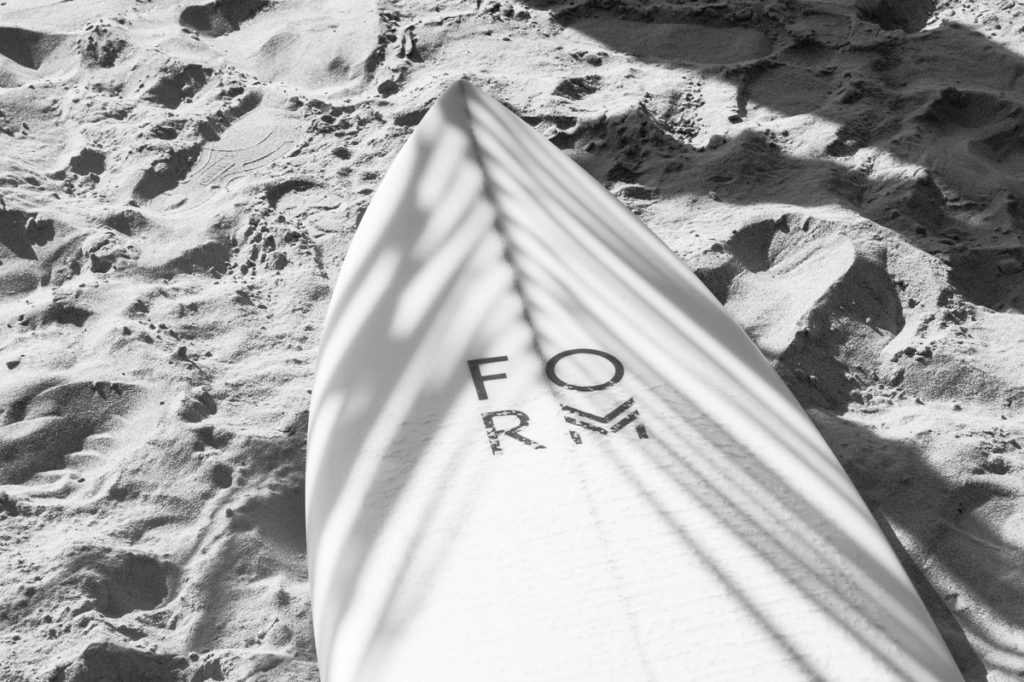 Eventually that lead me to going up to the factory and ordering that 6’3. We realised that unintentionally I had been slowly designing and tweaking this whole array of different shapes that performed and had unique riding characteristics. I ended up with this radical quiver of boards that worked so well that It seemed like a good idea to get these boards under other people’s feet, so we started FORM Surfboards.

There’s five in the initial range. Each one is geared to one specific thing, while still covering a lot of performance area. They all hinge around a twin fin performance, and speed. Each board draws its own unique line, the ADPT twin fin has an amazing arcing carve, then there’s the GOTO- a high performance thruster designed to go in British and average European waves, then a kind of high tide air board called the Fruit Scoop.

Then, a quad called the High-Line, where the tail and the nose are the same shape and it’s got that real cruisy snowboardy feel, and finally there’s the Flow-Stik, which you can ride as a quad, a thruster or a single fin and is ideal for any beginner looking for their first hardboard or intermediate to advanced surfers looking to mix up wave riding approach I ride this model as a custom with channels and twin keels. It’s amazing fun and so fast and easy to ride. 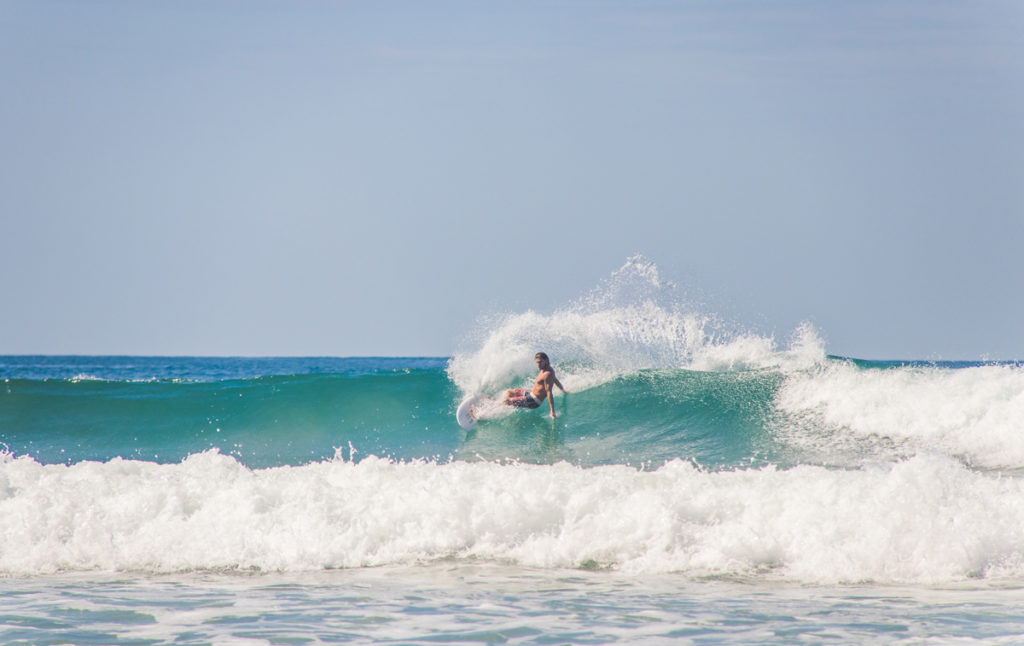 Which is your favourite from the range?

The one that I’m most proud of is the ADPT. It started with one of my small wave competitive thruster shortboards. Two years ago I was looking at it and thought if we changed the plugs it would make a sick twin fin. We made the nose slightly wider, pulled the rocker down a little bit, switched out the fin boxes and that’s been my go to twinny ever since. It performs amazingly well. After surfing it for a few months, I started looking at it again and thinking ‘I bet this would go good as a thruster…’

So now I’m looking at my twin fin that’s come from a modified thruster, saying I wouldn’t mind putting in thruster boxes. And me and my shaper kind of had the light bulb moment at the same time, and we decided to put thruster and twin fin boxes in this board.

As far as we know it’s never been done before, because the setups kind of conflict; the twin fin boxes are set further back, and further in than a thruster. So we routed out and fitted the two FCS plugs together like a puzzle, so now we’ve got a legit twin fin set up and a legit thruster set up in the same board. This is so cool it means on cleaner days you have all the speed of a twin fin and can do big open face carves and get all stylish and then on those average days you can ride it as a thruster.

It really is two boards in one especially now the fins clip in and out so effortlessly you can swap and change mid surf if the tide changes or the wind swings. Plus if you can only afford one board but want to experiment a little it’s perfect for that too. 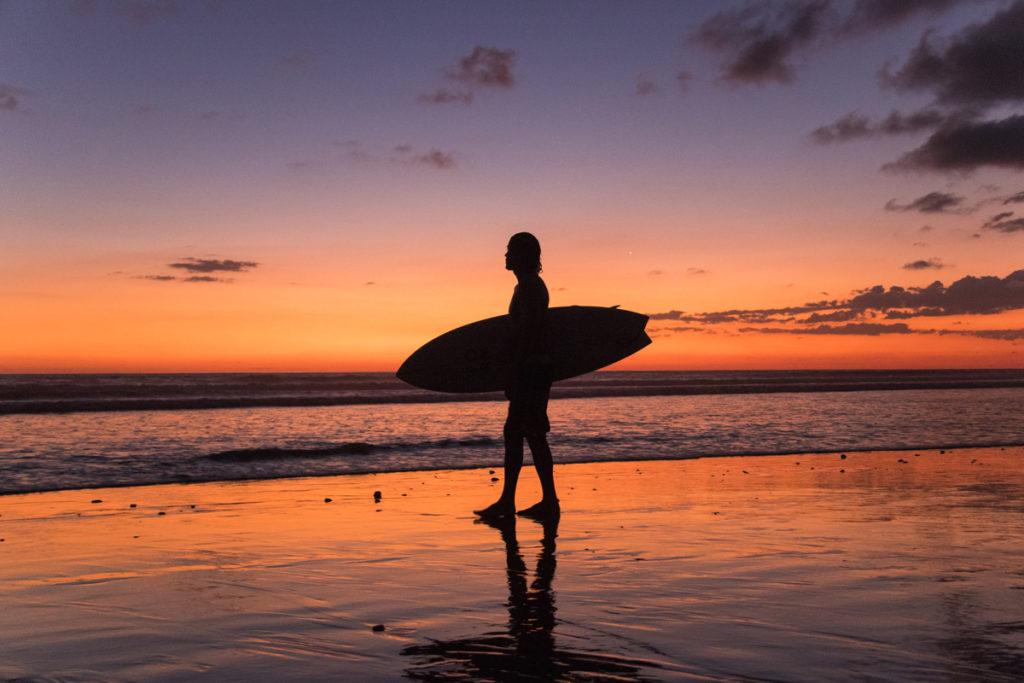 Who or what has inspired you most throughout the process?

Well, my two biggest influences have always been Kelly and Rasta, if you could mould those two surfers together I think you’d have a pretty insane surfing style and progression. I’ve always watched Rasta on his twin fins, because he’s surfed them for ever, and then Kelly’s performance on a thruster. More recently John John as well, he does those crazy mid face bottom turns and then down carves on the rail, so basically like a mountain carve on a snowboard.

Although really, I get inspiration from everywhere. I feel like surfing has become so diverse, and there’s so many people doing it, everyday we’re we’re seeing different people’s interpretations of riding a wave and the rule book has just been thrown in the bin, which is the best thing that could ever have happened, because now you’ve gone back to the days where people are discovering things for the for the first time. 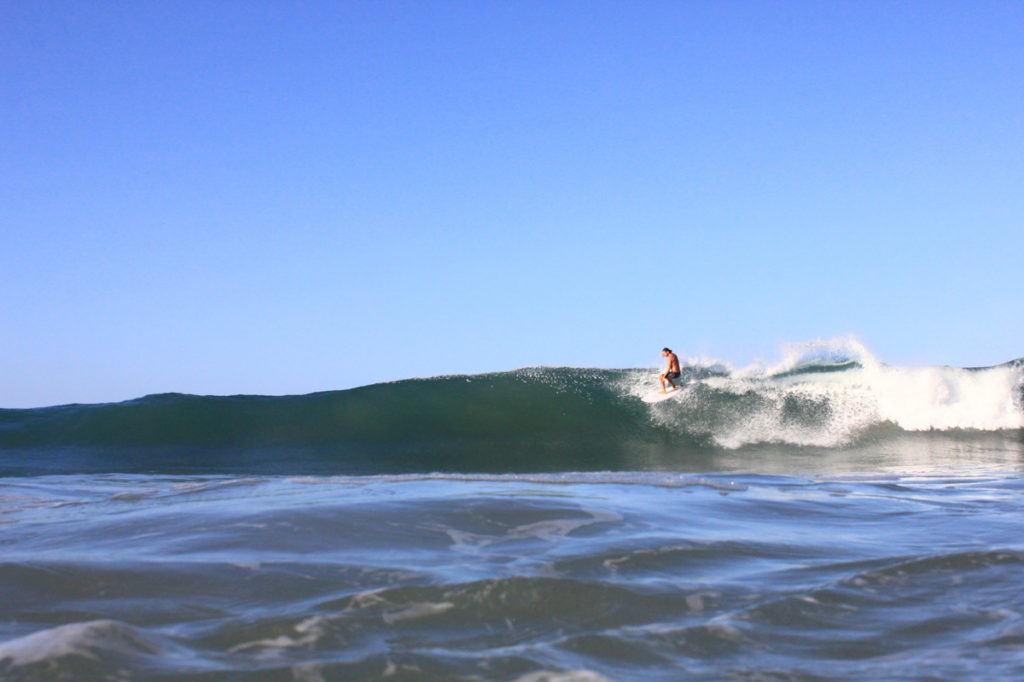 A highline on the Highline. Photo Ollie Howe

I think I’ve been affected by that change as well, I’ve always had that playful aspect to my surfing, growing up, but once channelled down a competitive path you have to close a lot of that down to keep your consistency pretty high. You want to keep everything the same; your board, your leash weight and how much wax you put on your board, because you want everything to feel like it did the last time you surfed it, so then you’re doing it without thinking and just going through the motions.

Where as now I want it to feel the complete opposite, where suddenly you’ve got this weird challenge under your feet and you have to figure out how to adapt your surfing to be in tune with that board in those conditions, and for me, that’s the real fun of it.

FORM is a collection of boards that I have been designing and surfing for years. Finding that magic spark in a surfboard is one of the best feelings. Riding a board that feels like its actually finding it’s own way along a wave, helping you surf better. These boards are the end result and each one feels magic. We have had some amazing feedback already from people riding the boards. Another focus will be to look at better production materials that have less impact on our environment but keep or strengthen the performance characteristics of each design.