Home » John John Florence To Do 2020 Tour Without Flying?

With Greta Thunberg travelling to the UN Climate Action summit in New York this September on Malizia II, a zero emissions sailboat (having previously decided not to attend due to shunning aeroplane/cruise ships as too carbon heavy), it got us wondering, how epic would it be if two-time World Champ and sailing enthusiast John Florence did the entire 2020 WSL Championship Tour under sail power?

Sure, it won’t be carbon free, he’ll need to take a couple of trains as well as using wind power, and yeah, building a boat and everything in it has a carbon footprint, as do his boards, wetsuits and the food he eats, but you get the idea.

Not only would he be making a huge saving from his current, massive carbon footprint, but even more importantly, he’d be sending out a powerful message to millions of surf fans the world over, that dismantling the fossil fuel economy should be the collective priority, above all else.

Assuming the schedule stayed more or less as this year’s date-wise, could it even be done? Would he get any freesurfing in between events? How much carbon would be saved by the no fly policy?

Without wanting to get bogged down in sailing specifics, these distances are more or less straight line sea distances between ports, the kind of route you’d do under engine. Obviously if the wind is directly in front, especially in a cat like his, you’ll end up zig zagging (tacking) a lot, 100 degrees or so through the wind and so cover a much greater distance, and thus need more time.

There’re also all sorts of other factors that would lengthen any passage, currents and storms being the main ones.

We based the routes on 2019 schedule, despite unconfirmed reports that G-Land will replace Keramas and the Gold Coast season opener might be canned for 2020 – in which case the whole thing just gets easier, anyway.

As luck would have it, John happens to own his own sailboat, the $1.7m 48ft Gunboat catamaran Falcor that is more than capable of circumnavigation. She can make over 20 knots, and will comfortably do 7-9 knots upwind, but even so, we’ve gone conservative on average speed of 8 knots.

He’d have to leave her and borrow a boat of similar spec to make the legs where a train journey is required across continent (Aus and US), but he probably knows someone who knows someone, right? 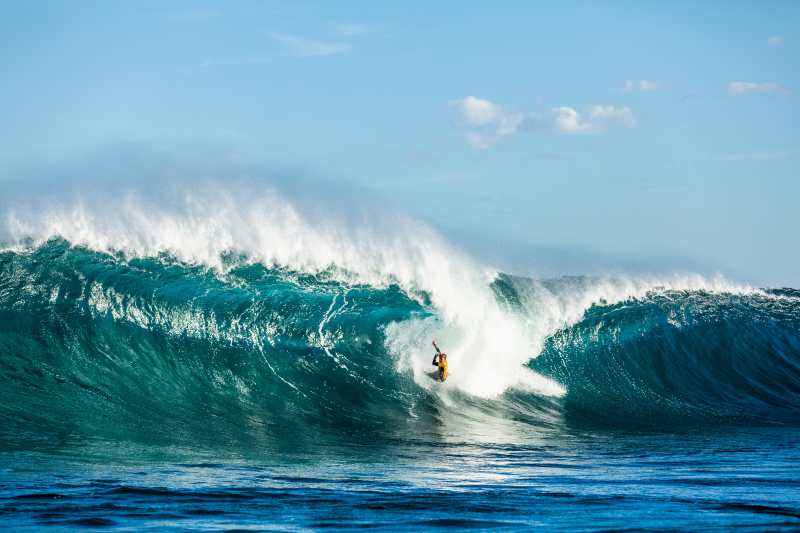 John would arrive late ish in WA so mightn’t get much freesurf practice in. Still, a small price to pay for saving the planet, right? Photo: Matt Dunbar/WSL

When the Goldie concludes John would need to get underway without delay, the 1080nm distance taking 5-6 days at 8 knots. With only 3 clear days between events on the schedule, he’d struggle if the GC final were held on the the last day and Round 1 the first day of the period at Bells, but surely the Wozzle would push Bells back a couple days, seeing as how into the environment they are these days.

After defending his Bells title, John’s got two weeks to make the 3100nm voyage to Bali, with 15 days on the schedule between events it’s maybe do-able assuming winds cooperate, but he’d be better taking the train to Perth from Melbourne (2 days), halving the distance to sail (1480nm) on a different boat, which should then take a further 6-7 days at 8 knots.

He then needs to get back to WA (6-7 days at 8 knots) which could be a struggle with only a 3 day minimum between events (assuming ends last day, starts first day, etc) but realistically, if they push it back a day or two/run the Women’s Rd 1 first, he’s sweet. Enough time to give the boat back, say thanks, and go win Margs. 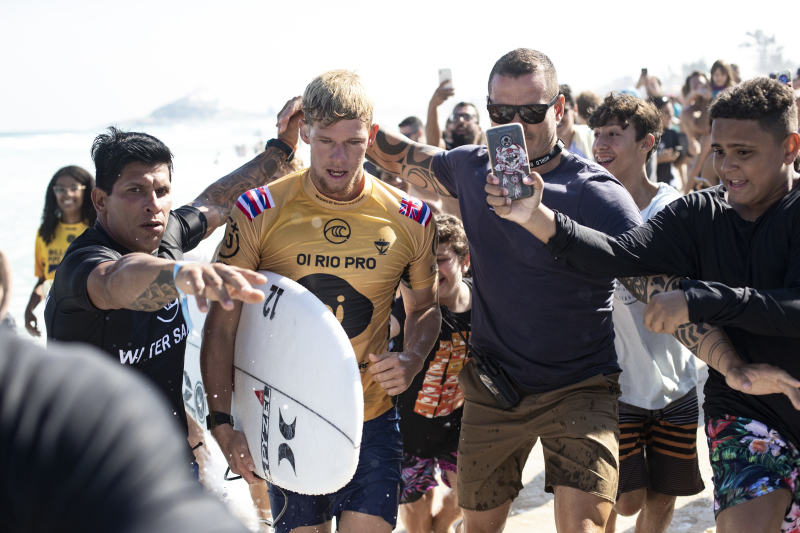 The bad news for Rio based Florence fans is that the sailing would mean missing the Brazil event. The good news? Ice caps! Photo: Thiago Diz

No Show in Rio

Bad news folks, John’s not gonna make Brazil on time. Will the Wozzle fine him for the no show? Surely not. Missing Brazil is a small ask in the big picture of saving the planet and future of all life on it, plus more than a few commentators, coaches etc are falling over themselves thinking up excuses not to go each year, anyway.

Instead John will head straight to J-Bay, a 4376nm journey from Margaret’s, for which he has a month. With around a 22 day passage at 8 knots, he should be sweet for plenty of warm up freesurfing, maybe even a bit of safari for an anti-poaching Insty post.

The Tokyo Olympics will happen while John is somewhere in the Indian Ocean, which he will be boycotting for a number of reasons. Chief among them the fact the Olympics are essentially a “7 billion dollar advert for the world’s worst companies.”

Surely the best cruising destination on tour – as well as the best surfing one – it’s gonna be tough, even for John and his fast 48ft-er to make it. It’s an 8850nm passage to Papeete from Port Elizabeth via the Straits of Magellan (under the bottom of South America), taking around 6 weeks, with only a month on the schedule. Given the fact that he can arrive in SA early, that event could feasibly be nudged forward a week or so, and Chopes back a few days in order to make this epicness happen. Bit of an eventful sail too, maybe a bit pukey, seeing as he’s going around the world the ‘wrong way’. 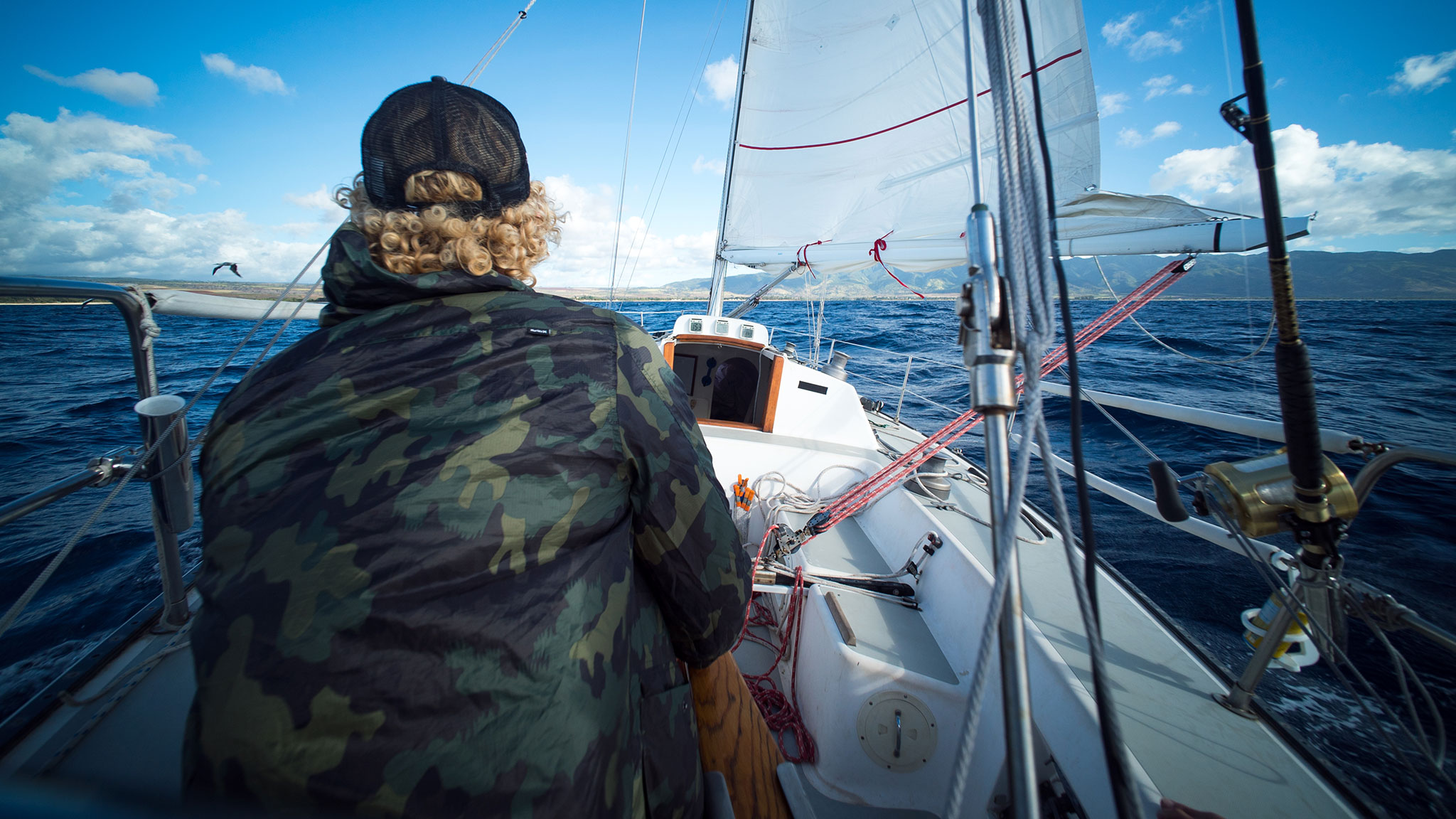 2020: While the rest of the charlatans are crapping on about ‘sustainable’ ‘eco’ drinks bottles while using 20 000kg of carbon flying around the world non-stop, Florence steps the fook up and travels under the four winds, man.

It’s a cool 3750nm up to California from Tahiti, taking some 18 days at 8 knots. There are currently 18 on the schedule, and he’d need to get the Amtrack up to Leemore from San Diego. From Leemore, Florence will need to hop on Amtrack again (via San Fran) and go cross continent to the east coast, let’s say NYC. By all accounts the food ain’t great on Amtrack, so he’d want to bring some grub along for the ride (surely Slater will sort him out some chia pods?). After the 3 day train, he’ll hopefully pick up some sweet westerlies/bit of Gulf Stream to help get him to Europe.

With the Freshwater Pro finishing 21st Sept and France starting 3rd October, he’s got under two weeks to make Hossegor, with the train to NYC taking 3 days and 3000nm NYC-Lisbon passage 15 days. That’s a bit tight. He’ll need Quik Pro to start a bit late (it’s never started on the first day, to my knowledge) or them to run the Roxy first.

The great news is that the overnight train from Lisbon to France is epic. When I did it, I had my own ensuite cabin, which is a touch pricey, but hey the WSL actually picked up the tab on that occasion. You leave Lisbon’s Santo do Apalonia station after dinner (9pm-ish), and arrive at Hendaye on the French border at breakfast, fresh as a daisy, and more than ready to crush a ‘seeding heat’ or whatever they call it these days.

John can then schlep back using his return ticket to Peniche, surely getting in plenty of freesurf time in Portugal.

When Portugal wraps up, whether he’s secured the 2020 World Title or not, John will struggle to make the 8892nm journey via the Panama Canal (13000nm via Magellan Strait) to Haleiwa. He’d be better doing a transat back to NYC, and use his return train ticket back to LA… all that taking around 20 days. From there, he can pick up Falcor again (hopefully someone’s washed the salt off the decks and picked up a few cans of refried beans) to make the 2231 nm, 11 day final sail back to The Islands.

With six weeks on the schedule, he’ll even have time to do plenty of freesurfing on the North Shore, get his land legs back, and probably even compete at Sunset, if not Haleiwa.

By which time, his sail/train journey will have saved an estimated 18.8 metric tonnes (18000kg) of carbon dioxide versus him flying to do the tour (and not including any freesurf trips /sponsor obligations).

And if the WSL decide to offer extra points for surfers who sail between events, or even if the whole of the men’s and women’s tours and all their entourages decide Business Class is for bell ends and sail is the future, well they can have the idea for free.

It’s my gift to Earth, and it’s too important to keep to myself, like Volvo never putting a copyright on the three point seat belt.