When Storm Doris hit a few weeks ago, after watching the Cribbar out of my window for a while, I wrote that despite hosting a few windy bombs, Newquay’s premier big wave spot would not be surfable that day.

It turns out I was wrong… 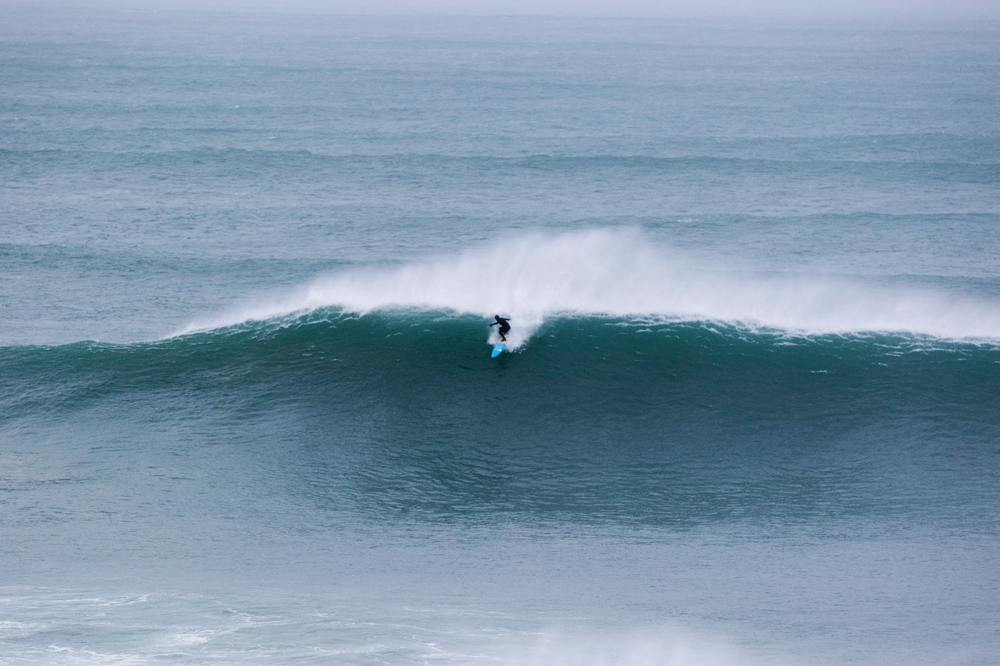 The day after, a sequence of images landed in our inbox of one lone surfer ruthlessly disproving my assertion, taking a sketchy looking airdrop on a solid one at the Cribbar. Suffice to say I was impressed and, with a view to including the images in our Storm Doris round up, set about trying to figure out who the lad in the shots was.

I asked everyone I could think of in Newquay who might know the answer, but no one seemed to have a clue as to the chargers identity. ‘Someone from down south I think’ came one answer, ‘Some visiting Aussie guy’ came another. It turns out the man in question was Truro based Jonny Leon; supermarket worker and aspiring big wave charger. Intrigued, we caught up with Jonny to find out more about him and his story.

I was always really obsessive about things

Originally from Berkshire, Jonny started doing whole summers in Cornwall from around the age of 16. During his youth, he was into all sorts of other pastimes, including the violin and ice hockey but surfing quickly took over.

“I was always really obsessive about things,” explains Jonny “and that’s I guess how I’ve been really committed to different things at different stages of my life.” It wasn’t until 2011 however, on a 13 week trip with Ticket To Ride to South Africa and Mozambique, where his penchant for the bigger stuff truly started to develop. In the following years, Jonny travelled to Hawaii, Indo five times, Mexico, El Salvador, Tahiti, Morocco, France and California, all funded by seasons spent surf coaching. “These trips gave me a little bit of experience surfing heavier waves, and a passion for it,” he says “but I was never away for long enough to really make headway with it, but I always knew I wanted to surf when it was bigger.”

In September 2015, Jonny made the decision to head out to Tahiti, to spend a month surfing Teahupoo, where, he scored a couple of good swells  before moving to the north shore of Oahu for the the 2015/16 El Nino Winter. “I worked at a Surfboard factory on this trip at the Waialua Sugar Mill, and bought a 9’8 Gun from John Carper and got some amazing waves at Waimea.” recounts Jonny. “We didn’t have much money on this trip so camped under a house in Pupukea for the whole winter.” he continues. “I ended up with pneumonia and burst my eardrums out at Waimea, so this trip was ended early for me.”

Indeed, Hawaii wasn’t the first time Jonny has hit a bit of a speed bump on his travels: “When I was in Mexico I ended up with Bell’s Palsy, paralysing my face for a couple months, and in my second year of Uni, I found out that I have a chronic kidney disease, so I have to really look after myself.”

Jonny also suffered a brain injury last year, after falling off his skateboard

Jonny also suffered a brain injury last year, after falling off his skateboard. “I lost the ability to walk for a couple of weeks and I thought I would never surf again”. However, the incidents haven’t knocked his ambitions. “At the end of 2016, I’ve tried to come up with a more sustainable way of continuing to surf big waves, so I got onto Tesco’s retail management graduate scheme.” he explains. “It’s a great company to work for, I love that every day is different and it allows me to work shift patterns down here in Truro, so I manage to work around the big swells and get small windows in where I can surf.”

One of Jonny’s big ambitions is paddling a bomb at Nazaré, and that’s where his focus is set for the foreseeable. Although Jonny doesn’t have any major backing, he has been getting some support from Diplock.

“It’s been really amazing working with Diplock on a couple of boards, investing time and love into the boards for me, I really trust them.” he said. Jonny is looking to build a high enough profile to be given an inflation vest, to take on the beatings that will inevitably come as he continues to push his limits on some of the heaviest waves on earth.