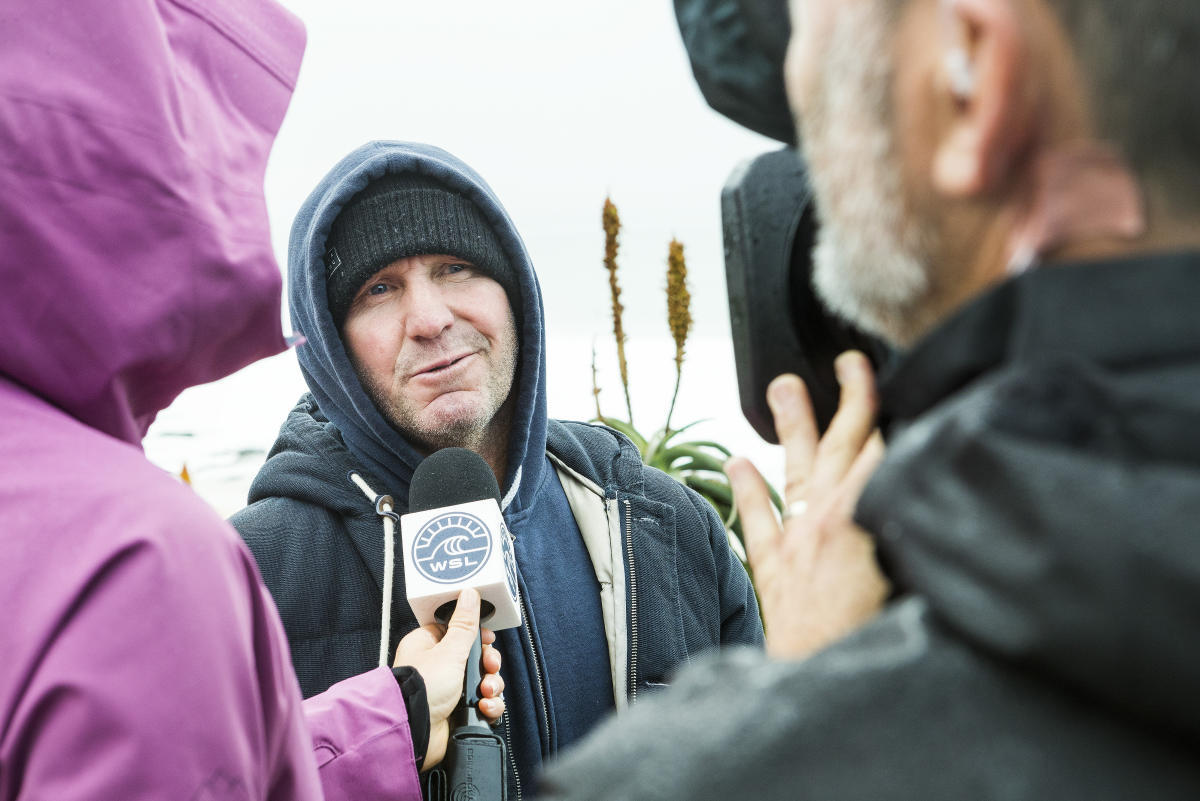 Richard ‘Dog’ Marsh is a former Top 10 WCT pro turned coach. You’ve probably seen him on the WSL’s live broadcast beside young charges such as Ryan Callinan, Fred Morais and Leo Fioravanti (he’s the short, kinda intense, kinda naughty looking man with the clipboard), or maybe heard him in the commentary booth giving his own insights to the characters that make up the WSL talent roster.

There are few people in the world that have digested as many heats on the CT and QS in the past five years or so and as qualified to make calls on the form, fortés and fallibilities of the pros. And even fewer people that are simultaneously in the inner circle of the Tour elite, yet still willing to on record with frank, no bullshit appraisals and opinions.

Hailing from Kurnell near Cronulla in south Sydney, Dog grew up with occy and was part of the late 80’s/early 90’s Aussie animal scene that surfed hard and partied even harder.

He was famously caught in the G-Land tsunami with the Hot Tuna crew in the early 90’s, and blasted several hundred metres through the jungle underwater in the pitch dark, and very lucky to make it out alive.

Living in SW France for the past ten years with his family, Dog is the modern conduit between European and International pro surfing, and has helped make guys like Frederico Morais and Leo Fioravanti household names around the surf world.

Funny, forthright, and fresh back from an epic Hawaiian season, we figured he’d be the perfect person to get on the It’s Not The Length Podcast to kick off 2019 for a chat about the North Shore showdown, his talent pool, and look ahead to the coming season. 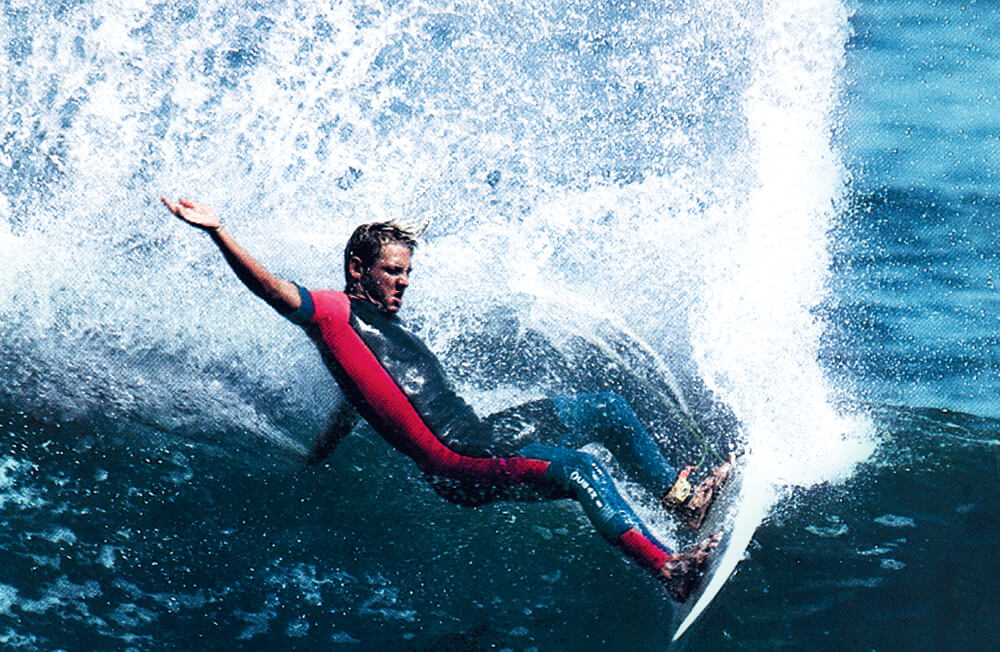 Dog back in the day. Photo: Aitionn

What’s Hawaii like these days compared to when you were competing there?

“Now it’s friendly. When I first started going there, fuck man it was the Wild West, I shit you not. You were kinda nervous, most of the time you were there. Now it’s unreal, the boys all travel a lot, it’s just sort of cross-pollinated, the surf community. It’s super mellow now, the locals are really cool. It’s got a really good vibe to it.”

Who were you looking after?

The same guys, I don’t have a real big stable. Frederico (Morais) Leo Fioravanti, Ryan Callinan, and then I had a couple of groms. Justin Becret and Tiago came over for the last two weeks just to get some experience. Justin ended up getting into the Pipe trials which was cool, and got through a heat or two. only 17 years old, so that’s a great result for him.”

How’s it work with 3 surfers and two very different outcomes?

“It’s not always the outcome you want. Having all 3 was the dream. we just came up a little bit short at the end. Fred had a real tough year, bugger all away at the end. He got badly injured at Pipeline and pretty much didn’t surf the entire trip, and it just came down to a couple of places. Joan Duru obviously did amazing in the last two events and slipped past him, and the same with Yago (Dora).”

“My 80’s background of just ‘Go get em, fkin do what it takes, paddle through em’ – that just doesn’t work for everyone, and Ryan’s a perfect case in point”

Ryan was just on fire this year…

“He’s amazing mate, you know what? I reckon he’s the most improved, or the standout of the season for me. How consistent he was through all three events, what he did in the freesurfs, and the trials at Pipeline was insane. He grew a couple of feet through this season.

What have you done to bring out his inner c**t? Make him a bit less of a nice guy in heats?

“You wanna know what’s happened? I’ve stopped trying to do that. I’ve been working with Jason Patchell who’s Surfing Australia’s Sports Psych, he’s really helped me connect with Ryan on different levels. My 80’s background of just ‘Go get em, fkin do what it takes, paddle through em’ that just doesn’t work for everyone, and Ryan’s a perfect case in point. We’ve worked on ways for him to still stand his ground, to compete when he needs to, and that’s in intensity level as well, but still be true to himself. He’s that guy who wants his surfing to do the talking, he really does. It doesn’t always work; sometimes a guy can be overly aggressive at the start and get an opportunity because you haven’t fought for the inside, for example, but it seems to be working pretty well for Ryan at the back end of this year.” 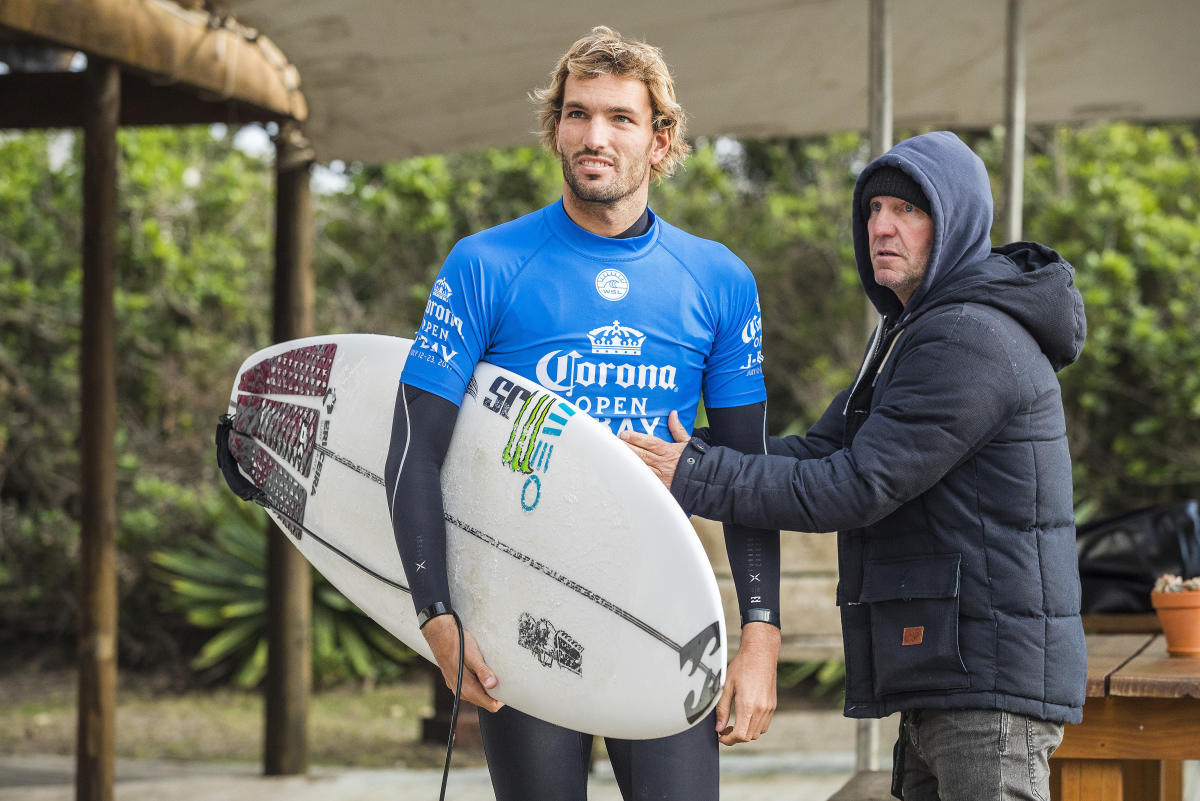 What about Leo & Fred? Different approaches?

Leo’s pretty much the opposite, super competitive, that’s probably some feedback you hear about Leo, that he comes across pretty cocky. I’d just like to point out that he is Italian (laughs) and mate, he loves it, loves that challenge, but that’s not for everyone, you know. Frederico is really similar, really aggressive when he needs to be, and that’s his natural personality.”

“Probably some feedback you hear about Leo is that he comes across pretty cocky. I’d just like to point out that he is Italian…”

After the heat when you debrief with the surfer and go through the scores on your notepad, and then they walk off, how far away are we from then seeing someone come and debrief you on how you did, coaching that heat?

“You’ve met Joel Parkinson, he’s the coach’s coach (laughs). Just this last trip to Hawaii, Mick’s been on that bandwagon too and it’s actually pretty easy to get a job as a coach’s coach. You don’t even have to come to the beach whatso-fkin-ever… you can be anywhere, drinking the finest whisky, you can sitting on the Gold Coast in your luxury fkin mansion, whatever, you can still have your two cents. It’s not something I’m encouraging (laughs).”

“We actually try to stay in the background as much as possible, and part of that is dealing with the team… the guy who’s the phsyical trainer, for me Adam Trypas does most of my athletes, and I mentioned Jason Patchell earlier, I do branch off and communicate with those guys as a group, separately, to try to keep, for the surfer, his shit super simple. Anything we can deal with as a group to keep the surfer’s job as simple as possible, I mean surfing is a pretty basic, and if it stays as simple as possible, that’s a good thing. Part of my job is decide what’s relevant and what’s not.”

Your predictions for the fates of the QS qualifiers for 2019:

Seth Moniz (Hawaii). “I see him just on the edge of qualification coming into Hawaii, and he’ll do it in Hawaii”

Ryan Callinan (Aus) I’d be really happy for Ryan to be anywhere between 15th-10th, the dream would be a little bit higher. If he can stay injury free I can see any reason why he won’t be in the Top 10.”

Peterson Crisanto (Brazil): “The kid’s ability is Top 10, and it has been for a long time, and that’s what scares me. He’s never really been able to capitalise on his ability. I think consistency will be his issue.

Deivid Silva (Brazil) “I think it’s gonna be a real hard year for Deivid. I can see him going back to the QS, and qualifying through the QS. He’s probably the best small wave surfer on the QS Tour.”

Ricardo Christie (New Zealand). “My head says it’s gonna be a tough year, my heart says he’s learned a lot of lessons.  He’s a bloody good surfer, he really is. I reckon he should just scrape in through the CT. Hopefully he’s got some good advice and doesn’t even do the QS next year, that’d be my advice.”

Leo Fioravanti (Italy) “Lots of the locations suit Leo, and knowing the kid like I do, he’s a CT surfer all day. He’ll just continue to improve year on year. I’d like to see him in the Top 15, he’s got the potential to be in the Top 10 for sure. From there you can only see the trajectory going up”

“I love Jack Freestone but jeez, he’s pissing me off…”

Jadson Andre (Brazil): “I heard he’s gonna get surgery to shorten his arms by about six inches (laughs). Aesthetically, it’s gonna make a big difference to his surfing. Honestly, Jadson’s just a QS surfer to me, I love the kid to death, but yeah, that’s where it’ll be.”

Soli Bailey (Aus): “I think he’s gonna requalify through the CT, Soli’s a lot better than people give him credit for. He nearly qualified last year, and the year before, he’s a good pedigree Soli, and he’s a bit of what the Head Judge Pritamo is looking for, which is a good turn of speed with the variety. outside Mikey Wright he’s the Aussie hope next year.”

Jack Freestone (Aus): I love Jack Freestone but jeez, he’s pissing me off. The kid’s proper, proper good.  Don’t doubt his ability, his natural talent is phenomenal, one of my favourite surfers ever, he’ll be right up there. The kid should win an event, and let’s hope it’s Snapper, wouldn’t that be good?”