How a melancholic 90’s indy surf film championing middle aged outliers revealed Hawaiian style surf in the Emerald Isle, and changed what everyday surfers have ridden ever since.

Andrew Kidman and Jon Frank’s 1996 surf film Litmus was nothing if not original. Against a background action clip parts films or the more polished and cinematic, yet fairly formulaic McCoy/Billabong films, Litmus stood out in terms of surfers, themes, storytelling and locations.

“The riders, the boards, the places, the ruminations… Litmus was easily the finest surf film of its decade” said The Journal’s Scott Hulet.

It’s been described as other things, too. ‘Moody’, ‘grainy’, ‘quite… long’ among them. I had a mate who was particularly offended by the ‘400 cartoon bottom turns’ in Mark Sutherland’s surfing n’ smack animation, in the middle.

Litmus’ cult status remains more intact than ever in the age of the edit. The film influenced what surfers all around the world have ridden ever since by championing the idea of a quiver of boards that vary by design concept, rather than different lengths of more or less the same board for different sized waves.

Derek Hynd’s section surfing his J-Bay quiver was a radical departure from the surfboard design cul-de-sac punishing average surfers at the time. Liberation from paddling around semi submerged on 17 1/2″ x 2 1/4″ banana rockered Merricks was offered via DH’s fruity forehand laybacks, emancipation from the tyranny of low volume equipment promised with each high line jive on his Frye fish.

But Litmus‘ expansiveness wasn’t only that of the mindset, board design or wave line. It was geographical, too. The Ireland segment, where Joel Fitzgerald rides what was then some of the biggest barrels filmed in Europe, at a Pipeline style reef in Ireland shot from the water, blew minds.

Ireland was known in the UK as a cold water Indo with a crew of core locals, but few outsiders imagined it ever got that raw, big and thick, that genuine Hawaiian size and power could be found on the outer fringes of these islands.

Jon Frank, one of the outstanding photographic talents to come out of Australian surfing, found himself on the North Shore shooting for Waves Magazine in winter 1994, and pretty much over the whole scene.

It’s Not The Length – Surf Podcast · Jon Frank on Litmus: Ireland Unveiled & The Birth of Ride Everything

He picks up the story:

I called Kidman from a payphone at Pearl Ridge cinemas in Honolulu, and was like, “I’m quitting surf photography, I wanna get out, I think I’ve seen everything I need to see. He said he was gonna do one more issue of the mag then quit, and was like, ‘Let’s go make a surf movie.’

He had a couple of ideas; something with Wayne Lynch in his teepee down in Victoria, and the other was Derek Hynd at J-Bay.  We didn’t overthink it really, in terms of marketing or even who would want to watch it. We didn’t have much money so we were shooting it on pretty shitty old High-8 video, I dunno if we were naive, stubborn or just stupid; but we just made the movie that we wanted to.

We bought around the world tickets, and we had a year to make the film. That’s the beauty of being 24, no kids, you can take your time. It’s not until you’re older that you appreciate what a privilege that is, to have the time to really explore a place.

I can’t remember who came up with Ireland, but it seemed like a good place to stop on our round the world trip. We were like, ‘Joel Fitzgerald, that’s Irish, he should come to Ireland.’ It wasn’t any more intellectual than that. I’d done trips with him and Kye and TF, we all knew each other.

Guys had been surfing there for a couple of decades before we got there, but it was still pretty underground. We bought a van for £500 in London, drove to Scotland, then got the ferry over to Ireland and spent three months filming that section. We hooked up with Richie Fitzgerald and his amazing clan there in Donegal, and it just fit with where we were in our lives. We didn’t want to go anywhere else. I stayed until the end of November and then flew to film with Curren in California.

We didn’t know anything about the surf there before we went, it was just through surfing ourselves that we discovered the place. I carried one board, Kidman too, one each. We were surfing quite a lot and exploring. That session with Joel by himself was towards the end of the trip. I’d had a couple of good surfs out there when it was smaller, I come from Cronulla where there’re a lot of ledging reefbreaks, it’s the kind of wave I grew up with. Joel is such an incredible tuberider and we were keeping our eye on it. It took a long time to get it like that, and it was pretty wild that day. There was no one around, no houses on the point at that stage, you just walked across paddocks and there it was.

It just felt good. We didn’t discover that wave, local guys had been surfing there for years. It was just fun, no stress, Kidman had no set agendas, we weren’t on a schedule, we stayed as long as we needed. That makes for a totally different kind of experience, not like a fast food surf trip, fly in for a swell, fly out.

Surfing in Ireland did remind us of being in the more remote parts of Australia, Tasmania or down south in Victoria. It’s an experience that’s more in tune with the whole of the environment, the landscape and the frontal weather. It was certainly a hardcore scene, the surfers in Ireland were tough. It’s a hard place to grow up and surf, they’re hard fucking people, with wetsuits that were shit compared to today. It’s a wild place, windy, you gotta wait it out. Nothing comes easy, so you’ve gotta have that connection to score it. And they’re some really challenging waves. 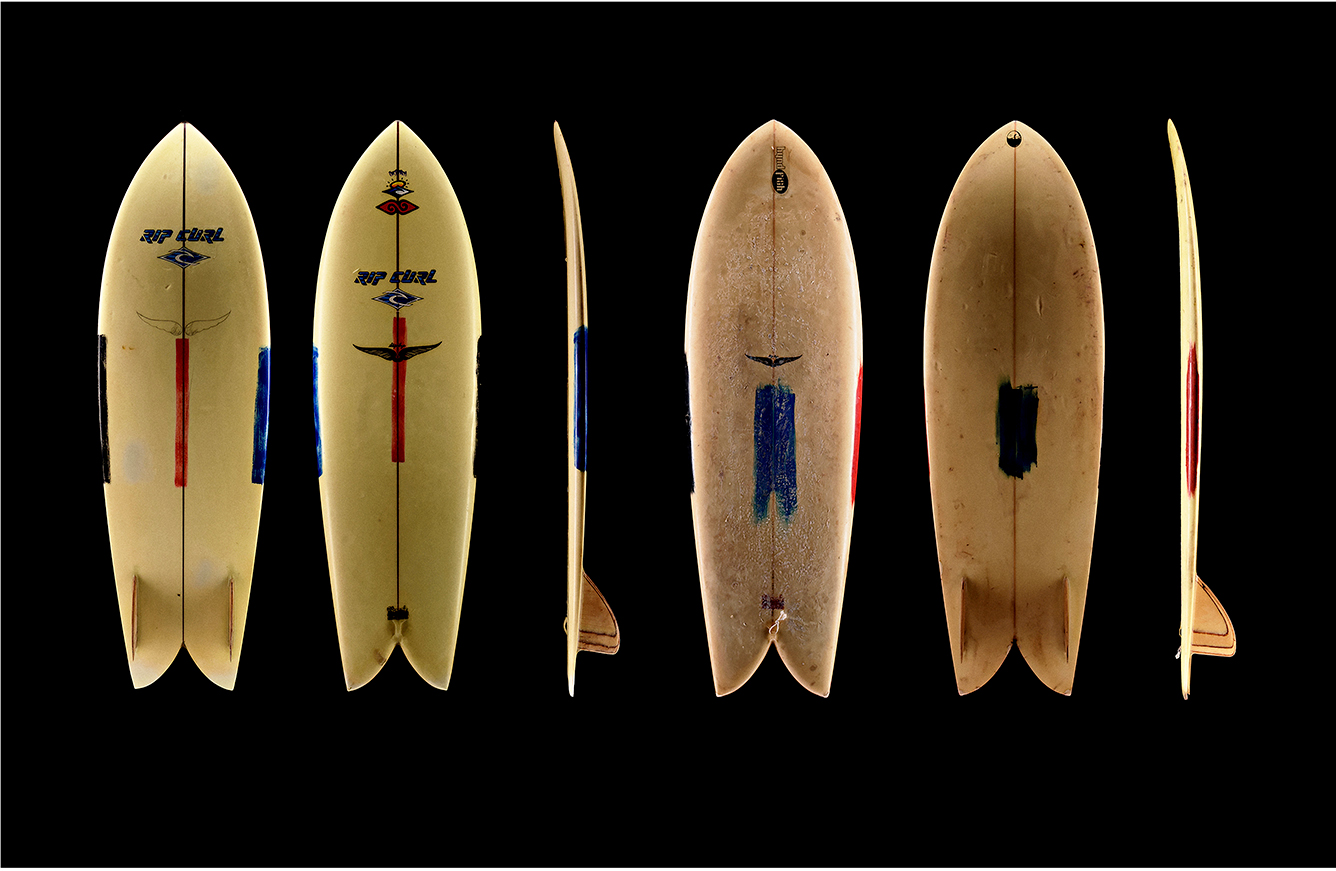 Tom Curren & Derek Hynd’s Skip Frye fishes. The Australian bushfires of summer 2019/20 destroyed Hynd’s house and its contents, including this board. The only remaining trace of it is what you see being ridden at pretty much every surf spot and on any given day, all over the world. Photo: Beyond Litmus

J-Bay was not my kind of wave, and I wasn’t used to shooting from the beach off a tripod, I found that kind of annoying, really annoying watching Kidman surf. Derek had had the Skip Frye fish a couple of years already, and a bunch of other amazing boards. Kidman and him, they love all the history. Personally, I’m not that into it. I did grow up riding single fins, so I wasn’t into the 18″ wide shortboards with crazy rockers of the time, but I didn’t know anything about fish until we got to J-Bay. Derek had an incredible quiver there, and him surfing that quickly became his segment.

I delighted in filming his part, I’d be filming him and literally struggling to keep him in the frame, as I was laughing so hard about what he as doing on the wave and how he was riding these boards. He was having that much of an effect on me, just in his approach to surfing that was so unique, like some sort of bizarre theatre. It didn’t seem like sport, it was incredibly high performance yet zero performance; the way that guy surfs – and even today with his friction free finless stuff – it was just so far left field from anything I’d seen, that I was viscerally affected.

I was pissing myself, but also blown away. I had that feeling when I was filming like, ‘this is really special’. You don’t often get that when you’re filming surfing, it’s tedious, monotonous, especially when you’re videoing, and especially videoing from the beach. It is batshit boring, it’s like watching fucking paint dry.  Your peak emotion is ‘don’t miss the best wave of the day’ that’s the big stress.

It’s a pathetic sort of paradigm to be living by; don’t miss the best wave of the day or you’ve failed at your job.

But with Derek’s surfing, it was a joy to be standing on the beach for hours each day, and I fucking loved it. That’s was just coz of the joy he had, you could see the enthusiasm translated through those boards. And people saw how incredible those boards are, and kinda snapped out of that ridiculous era of riding boards completely wrong for them and for the waves they were surfing. People actually started riding boards suited them, which was a no brainer really, and that all came from people seeing Derek having so much fun. 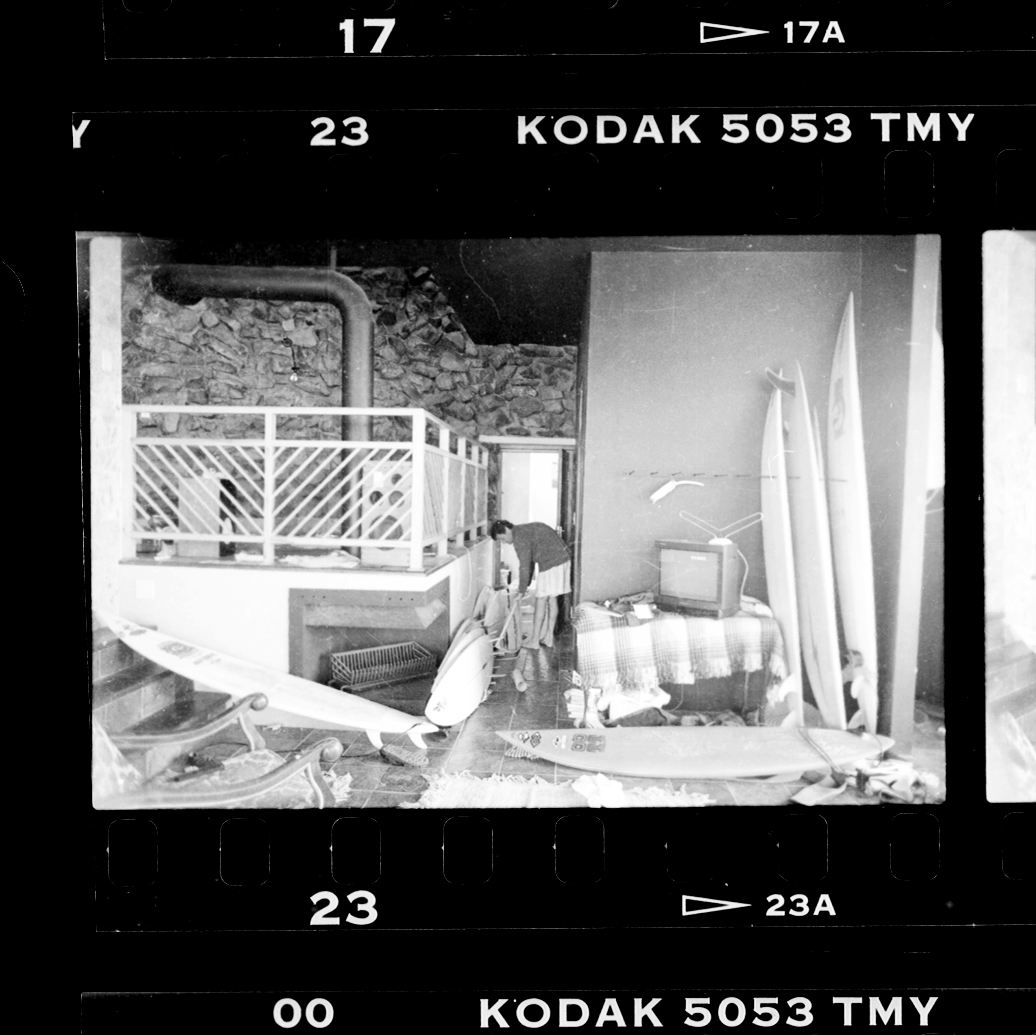 Images courtesy of Beyond Litmus.

It’s Not The Length – Surf Podcast · Jon Frank on Litmus: Ireland Unveiled & The Birth of Ride Everything

Around The World In 6 Surf Shots: Curren's 90's Backdoor Bomb by Ted Grambeau As one of the surf world's foremost photographers for over 4 decades, there isn't much Ted Grambeau hasn't seen [...]