The local council threatens surfers with a fine of up to 3 thousand Euros just for paddling out.

Surfers are protesting after the local authorities banned surfboards from the Orihuela coastline in south east Spain.

Although the ban is technically in force year round locals say they can surf with impunity in the winter months, however, when summer rolls around paddling out can see surfers threatened with a fine of up to 3,000 Euros (although none have so far been issued.)

According to the council, the ban is in place to protect bathers, however all over the world local authorities manage the needs of different ocean users and the relative dangers perfectly well and with 18km of coastline to play with, surfers are confused as to why there is no space for them.

“We do not want to be in the same area where people bathe. What gets us going is swell that makes it too dangerous for a swimmer to get into the sea,” explains Luis Tomas, owner of La Zenia Surf Club to Spanish news site Diario Information

“Surfers need areas with breaking waves and currents, and that’s precisely where swimming is not advisable. Beachgoers understand us, and support our suggestion of special delimited areas for surfing.”

The surfers have started a petition in order to get the council to reverse the decision, taking to the coastline as a mid-summer swell hit their local beaches earlier this month to gather signatures. 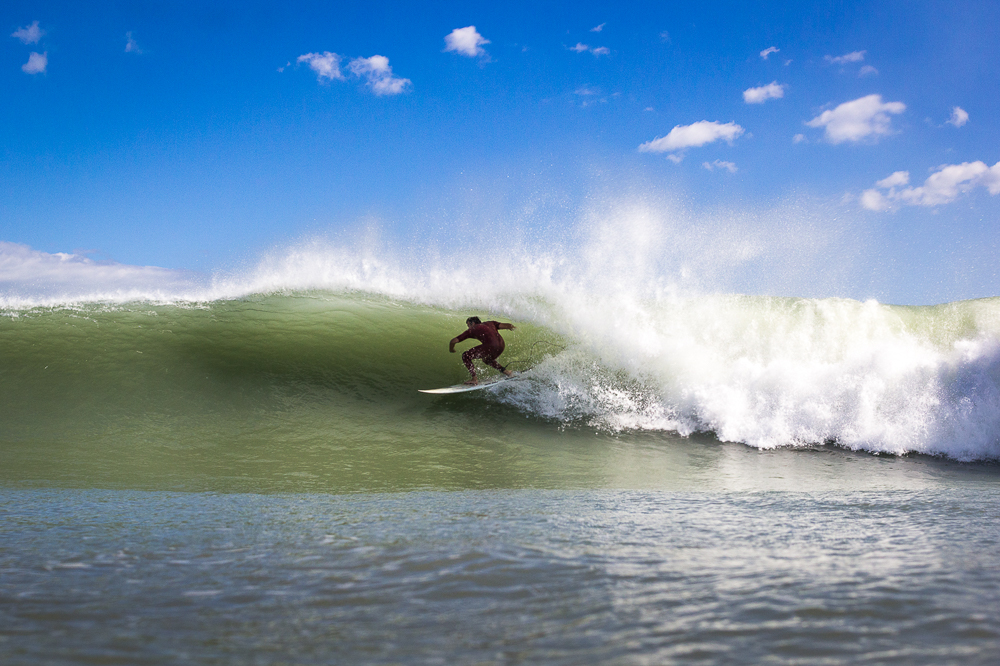 Fran Doce (@seaphrodite) sneaks under the hood a few miles up the coast in Valencia, where there is a thriving surf scene. Photo @thefrogeye

“We have had a great reception, bathers understand us and share that we ask for a small space,” said Tomas. “Our intention is that we can reach an understanding between surfers and bathers, as in many places, where each has its own space, because we know how not to hinder those who are bathing in the sea.”

Despite the ban, around fifty surfers were out in the banned area enjoying the swell. “Sometimes the local police come to throw us out, when they call the agents from the City Hall because people are complaining about our presence, they threaten to fine us, but they have never done it,” continued Tomas.

“We believe that it is a very good and healthy tourist attraction”, he continues, adding that the city council should not just promote “a a lot of sun and beach tourism” but surfing too.

Once they’ve received enough signatures, the Zenia Surf Club plan to meet with the mayor Luisa Boné, however they are not optimistic that his response will be anything other than his usual regarding a lack of space, despite they fact they are only after a small piece of the extensive stretch of coast “where it is more dangerous to bathe, but ideal for us”.