[Andy King is a coach and former QS surfer who’s done over 20 laps of the world tour coaching the likes of Julian Wilson & Mick Fanning. After an accident in 2004 that damaged his inner ear, he’s been without hearing and balance. Here, as part of a new WL series The Chronicles of Gnarlier, he recalls the time he lost Sam Carrier’s gun surfing giant La Nord in Hossegor.]

We’d had a long lunch, I was a bit drunk and was having a siesta. That’s how it all started. I had like 4 or 5 beers at lunch, and Carrier kicks me and wakes me up. I was sleeping underneath his house in his little den. So he kicks me and goes “The wind’s gone offshore, La Nord is pumping.”

My first thought, was that I didn’t have my flotation vest. Since my accident that fractured my skull, I don’t know which way is up. So I’m tired, I’m a little bit drunk – I’m disabled – and he hands me this purple 9’6” and says “We’re on.”

It’s another trip with Carrier, you can’t really say no. If you ever wanna keep rolling with him or staying at his house, you just can’t say no, or I can’t anyway. That’s the basis of your accommodation, if he comes up with an idea, a plan, a scheme, you’re along for the ride.

So I’m looking around for a leash and all I could find was a comp leash, for this heavy 9’6” gun. I’m so underprepared it’s a joke. We get down to the beach and it’s really crowded, there’s people everywhere. I couldn’t even get out of the shorey, I was like a baby turtle. I got blown up in the shorey, washed back up the beach and I remember thinking ‘This is gonna end in disaster.’

I finally get out, and Kolohe (Andino) was out there with his dad on a ski, and there were a bunch of skis towing, it was pretty solid. I actually got a bunch of really fun ones, and I started to get really confident, enjoying myself. Thing is, I hadn’t mapped it, it was a really long period swell and so every half hour so there were a couple of 15ft… maybe 18ft-ers coming through.

So I was hanging on this kinda inside bowl, and of course there comes a set, the horizon just goes black. I remember scurrying and seeing Jeremy (Flores) and Carrier were already over it, and I was paddling up it thinking there’s no way I was making it. I thought the only thing I could do was try and push the tail through. But because I was a bit drunk and tired, I got my timing all wrong. So I tried to push the tail through but got stuck and was hanging on to it, like a kiddies kick board thing in a swimming pool. 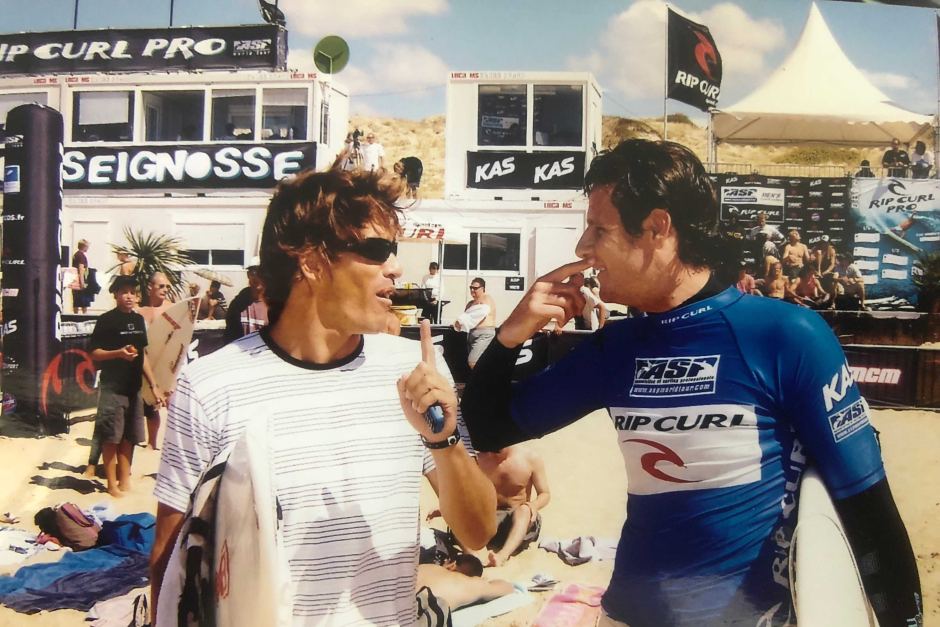 So I’m going, ‘Is this the time to push through?’ Then I was ‘oh I’ve left it too late, maybe I should hang on to it….?’ Anyway, weightlessness, then freefall backwards, then annihilated. I got winded straight away and thought ‘Fuck, I’m gonna drown for sure.’

And then that horrible sensation – coz the only way I can ever get back to the surface is by climbing the leg rope – I feel that ping and snap.

I was underwater, and in a bit of trouble. The gnarly thing about Hossegor is it doesn’t spit you out anywhere, it just traps you, regurgitates, and then the next one does the same thing. I was under for two, but it was only a three wave set luckily, and then I came back to the surface.

I was so far out, there was no way I was getting back to shore. I couldn’t go in through the line up, so I started swimming out further, thinking I’d could maybe go past Capbreton harbour, and come in down there somewhere with the current.

Carrier and that didn’t know where I was, as I was so far out, and then after about ten minutes of swimming a helicopter came. I thought it couldn’t be for me, it couldn’t have been launched that quick.  So it’s hovering over and I’m going thumbs up to the guy, “No worries, I’m sweet!” It’s done a loop around Capbreton and come back around and I’m mixing up my strokes to save energy, a bit of backstroke and so on. It would’ve looked like I’m drowning as I’m not the most coordinated as it is, I would have been floundering.

Anyway, I get to shore just before the rocks at the entrance to Capbreton harbour, in about 30 minutes, and I walk up the beach and Carrier is there with his wife and my wife, all a bit worried coz they haven’t seen me in half an hour. I’ve said to Sam “Have you seen your board?” to try and drag him in on it, as if it was his fault. “Where’s your board mate?”

The lifeguards came up and they were chatting in French, and after Carrier explained they’ll try and charge you for the rescue. So I quickly did the maths it was about a grand for the board, the chopper was more like six, he reckoned. So I decided to let the board go and swallow that, rather than get fingered for the chopper.

Obviously I didn’t pay him though, before I went back to Australia. I just left the country (laughs).

About three months later he gets a call, apparently a fisherman out of Capbreton found it, and recognised the name off the board and somehow got hold of Carrier. It had just been drifting out there over that deep water trench off Hossegor. Carrier was still a bit wary of getting charged for the heli, apparently a boat had capsized that day and that’s why the chopper was out, but they were still wanting to pin the rescue on someone, well, us.

But the moral of the story is, if in doubt, don’t go out. Seriously. It was the most humbling experience, and there was just no reason for it. We’re not 20 anymore, I’m 40 years old – and I’m disabled. I’ve got nothing to prove to anyone, better just to go surf a 2ft shorey in the harbour on a mini mal.