A collection of images and tales featuring our personal highlights and those of some of Europe's finest lensmen, from the year that was.

As the sun begins to set on 2018, we’re taking a look back at the year that was, with a dig through the hard drives of some of Europe’s finest lensmen.

For us here at WL HQ year number thirty-seven has been another stellar annum, crammed full of wave filled excursions both at home and away. We also crafted two deluxe print editions, and welcomed readers along to a series of countrywide sell-out film tours, featuring two of the finest surf-docs ever created.

No sooner had we rung in the New Year than we found ourselves gazing out at some of the very best waves Cornwall has to offer at everyone’s favourite south coast reef break. Several days of solid, clean conditions rounded out with a weekend of bright sunny skies and a ludicrous amount of tube time was enough to render the whole of January a highlight. Here’s Ishmael Hammon and Adam ‘Bearman’ Griffiths making the most of it: 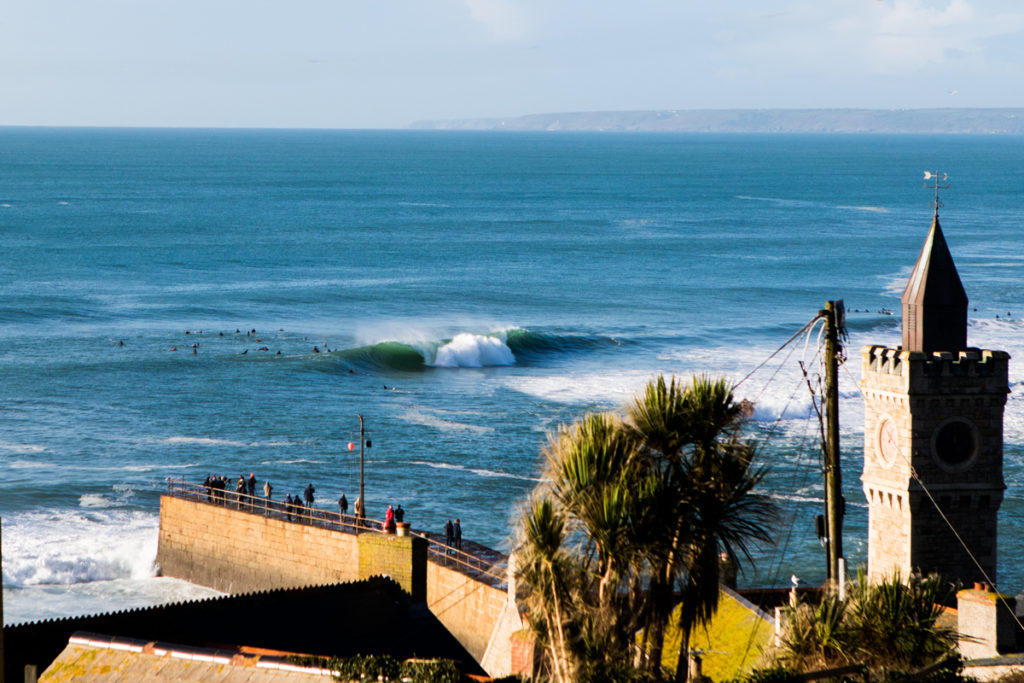 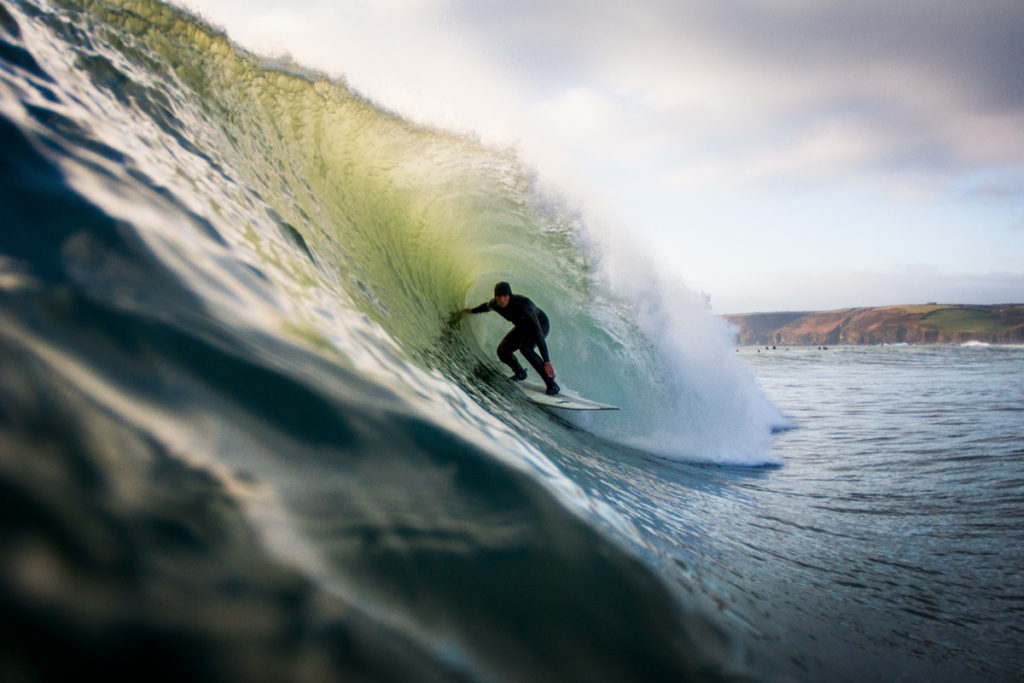 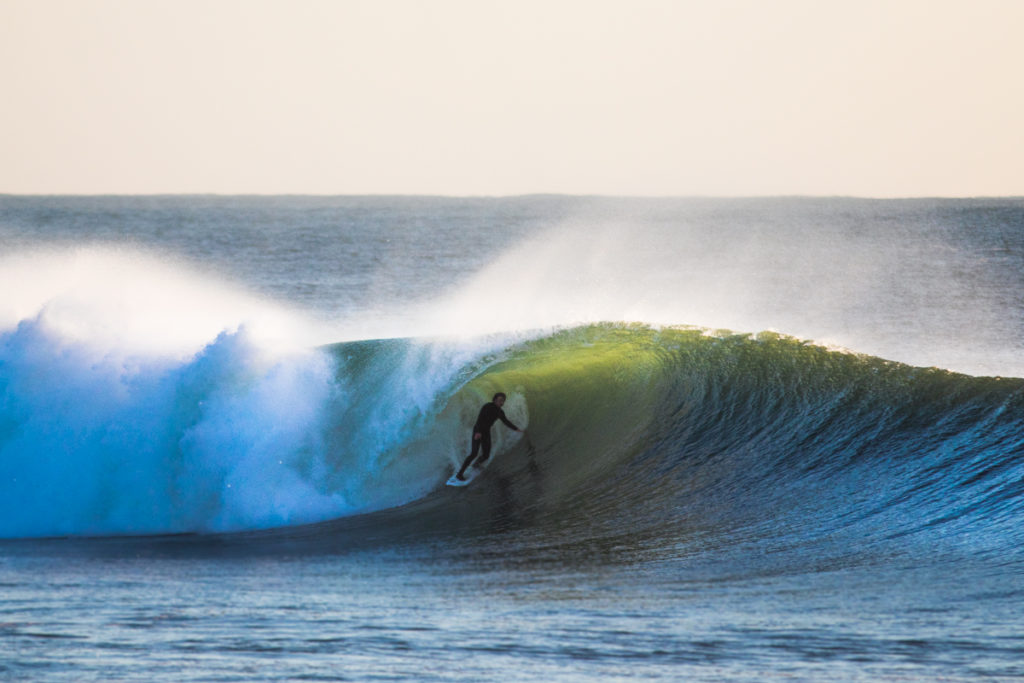 Following soon after came The Beast From The East, which buried Britain under a blanket of snow, but sent long azure lines wrapping into the stretch of sheltered Canarian coast, where we happened to be. 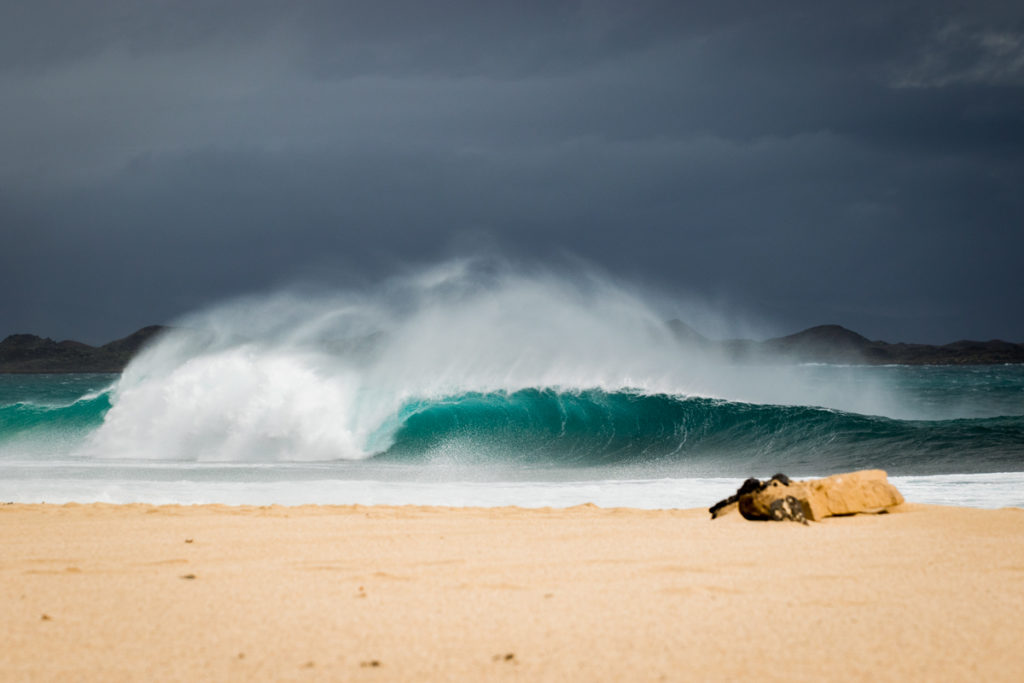 As March beckoned, a rare meteorological phenomena saw Atlantic facing lineups decorated with a sustained spell of offshore winds, lighting up the entire length of the coast. Up in Bude, Reubyn Ash jumped at the chance to snag a rare-as-hens-teeth stand up keg at his local. 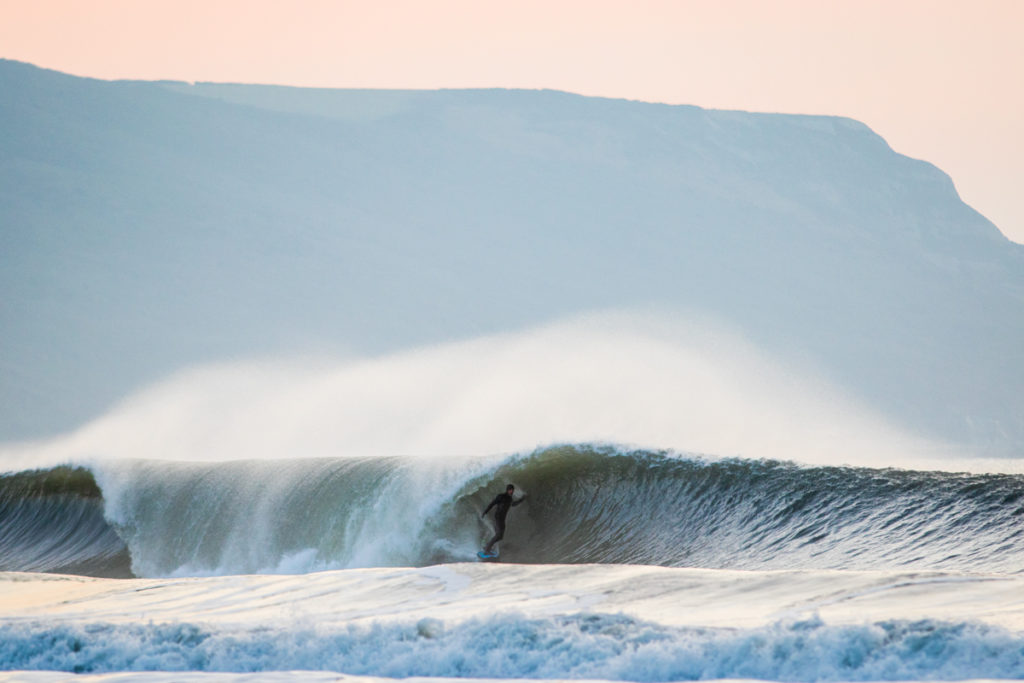 Summer was lost to a shimmering heat haze of small waves and football. Although we did manage to sneak off on a trip to the absurdly tranquil Faroe Islands– the absolute antithesis of tourist-crammed Newquay. Then, as the weather began to turn, and the Atlantic began to wake up we stole off to the wilds of northern Scotland, for a few weeks of fun waves and outdoor excursions. On the first day of our trip, we were greeted by overhead, ruler-edge swell, offshores and clear skies. 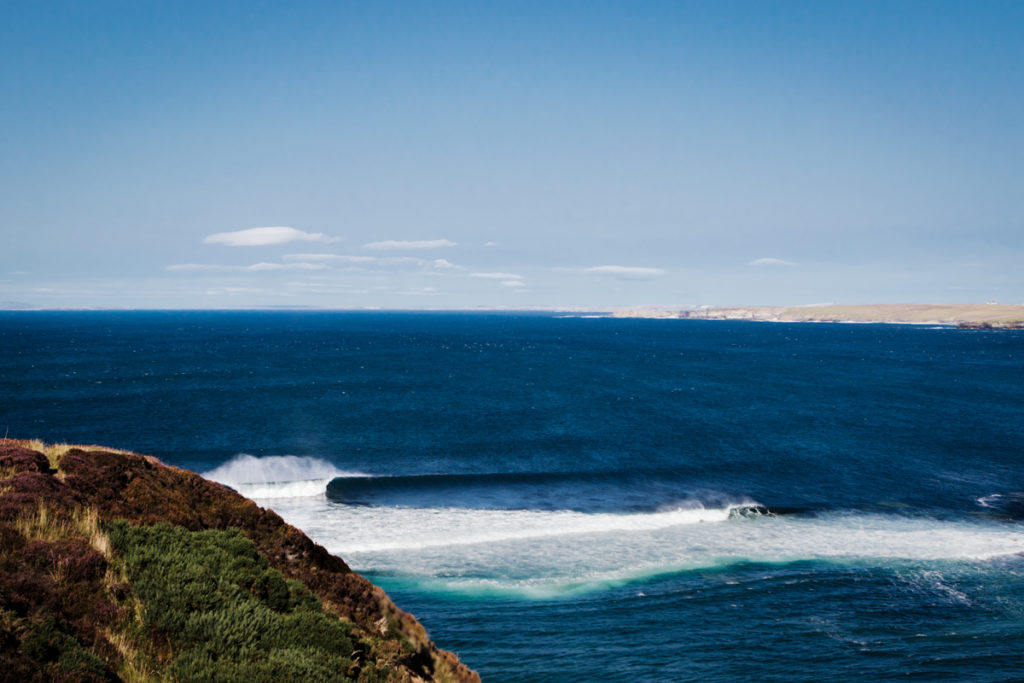 In October, we took our inaugural trip to France, where we lucked into what many locals are calling the best Graviere in two years. Here’s Joan Duru driving through a backlit cavern: 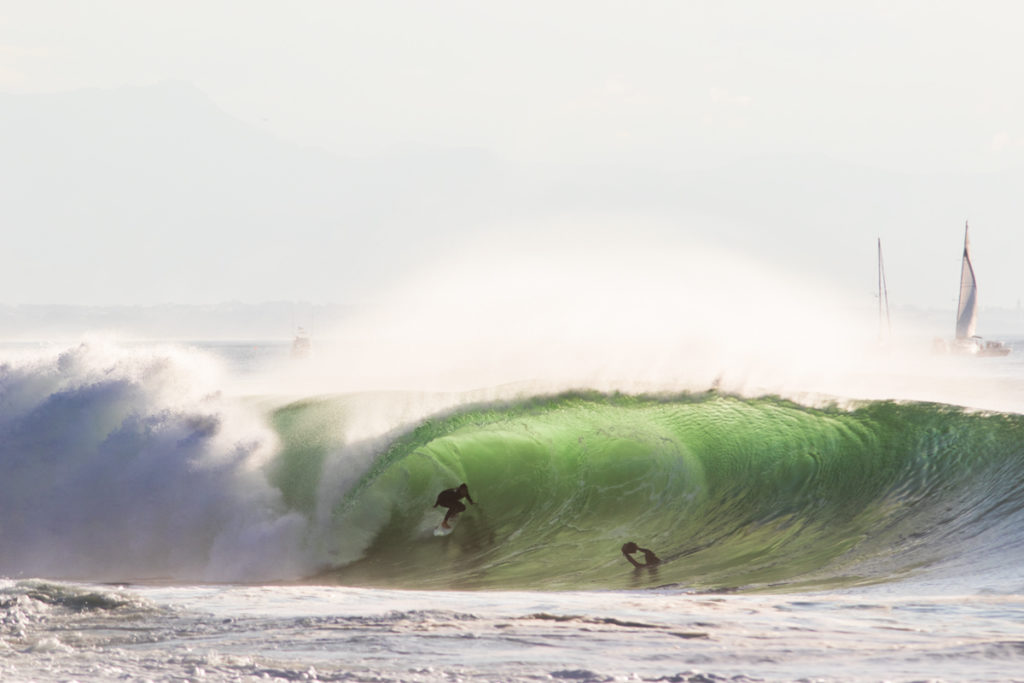 Then, a beautiful fortnight of swell kicked off the British winter in earnest. Here’s one of a sunset set at Woolacombe, doing it’s best second reef pipe impression: 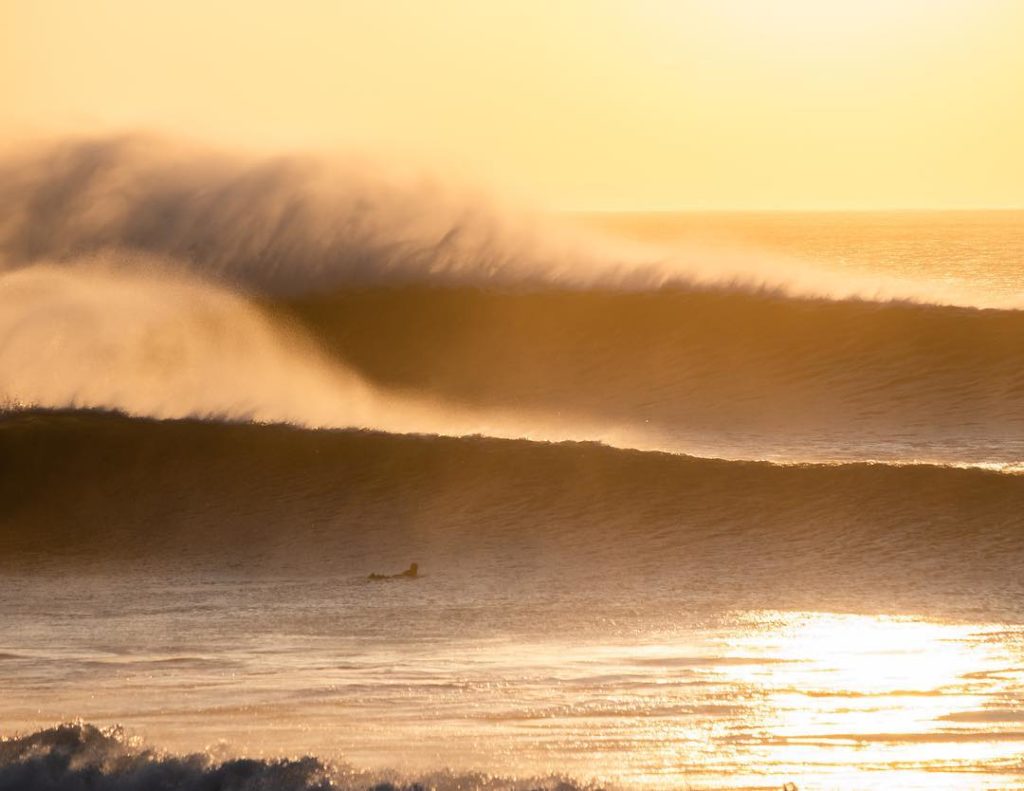 With our personal highlights covered, we sought out a flavour of what has been going on elsewhere, through the work of some of our favourite European lensmen. The brief was simple; tell us about your most memorable session of 2018.

Soon, our inboxes began to fill up with images spanning everywhere from the frozen point breaks of Iceland, to the mountain-backed rollers of the med.

Up first, south Cornish connoisseur James Warbey, whose image of Jayce Robinson standing proud at his home break became one of our favourite local shots as soon as we saw it. 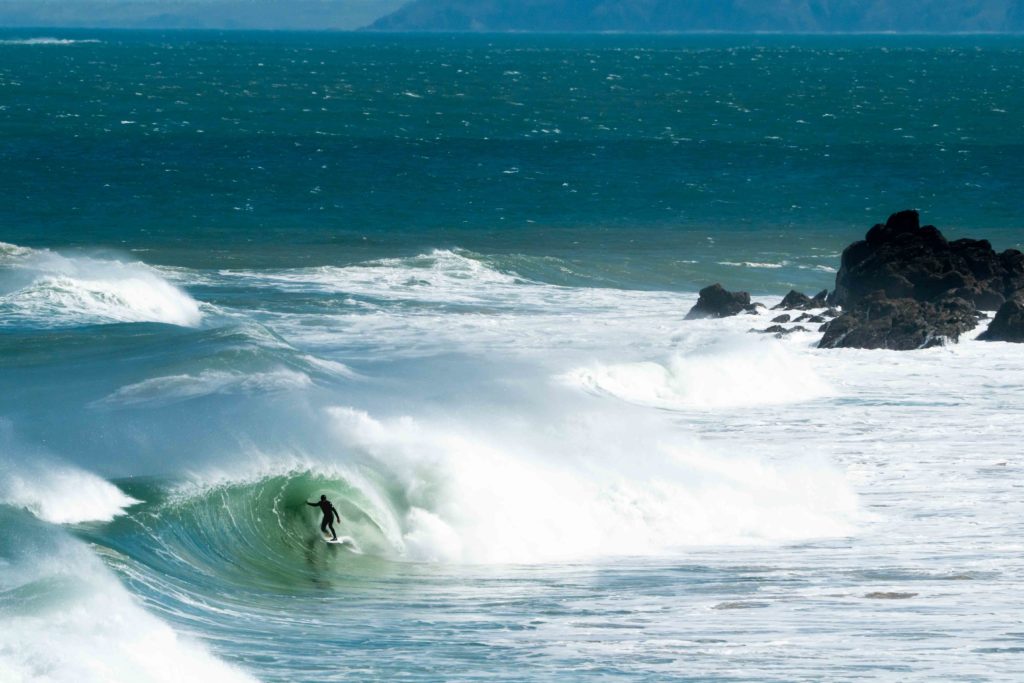 “I stood waters edge for 2 or 3 hours, before getting fed up because the direction was all wrong for the rights.” He told us of the shoot. “I packed all my gear up and climbed back up the rocks to head home. On the walk back I saw Jayce scratch into this one, grabbed my little point and shoot camera (that I have never taken on a shoot before or since) and managed to capture this. If I’d taken 10 seconds longer packing up it would have been missed.” 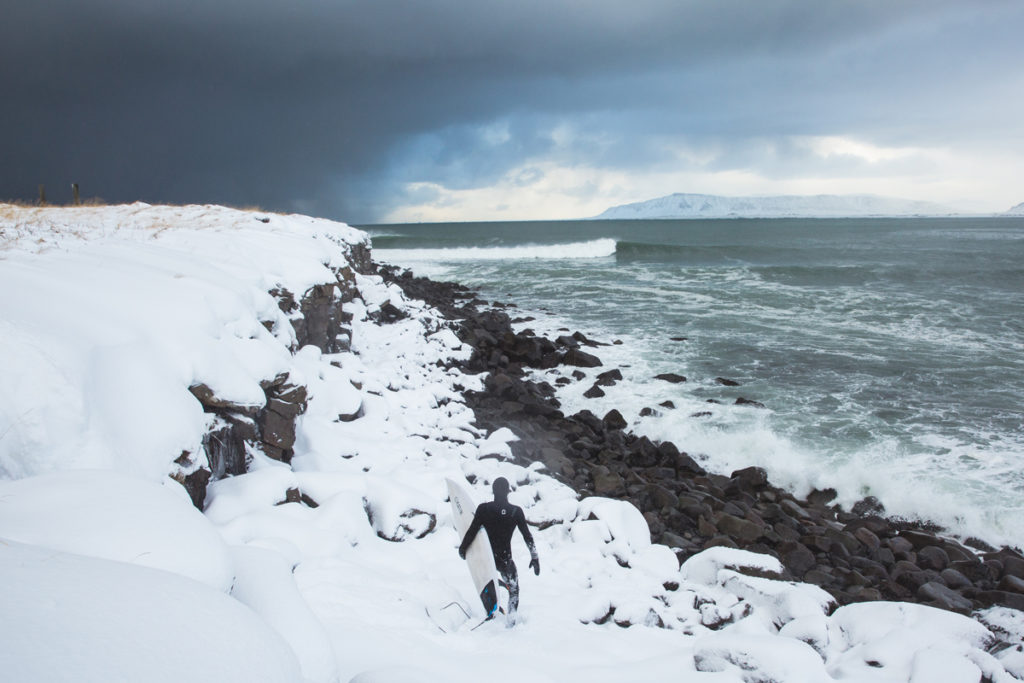 Across the North Atlantic, Icelandic Elli Thor’s most memorable frame also came from a less than perfect day. “This was not the absolute craziest sessions of the year as far as waves go but it was one of the more special ones for a few reasons,” he recounted. “Firstly we had never surfed this wave before, we had been to another wave in the area for a number of times, but this one had always slipped under the radar. Secondly, it appeared right out of the blue.

We couldn’t get a boat to get out there, so I paddled on an inflatable sup balancing all my camera gear on the front and then hiking in knee deep snow to reach the wave. Thirdly, the light was just crazy, these big weather fronts would move through dumping snow so you could barely see the lineup. All of a sudden these windows of soft light would open up for a few minutes making the snow covered scene look magical. The session only lasted an hour before the tide ruined it and the paddle back on the SUP against the wind was a nightmare but it was definitely one those sessions that you remember for a long time.”

Next up, Lewis Arnold’s offering, which was captured one of those rare North Sea days where everything comes together perfectly. “Late September the forecast and weather were looking unreal, almost every decent spot would be cooking but as is often the case, when the charts look that good for the east coast, it’s too good to be true,” he said.

“But this swell was different. The first day had been classic so we were optimistic for another epic day and got up early to make the most of it.” 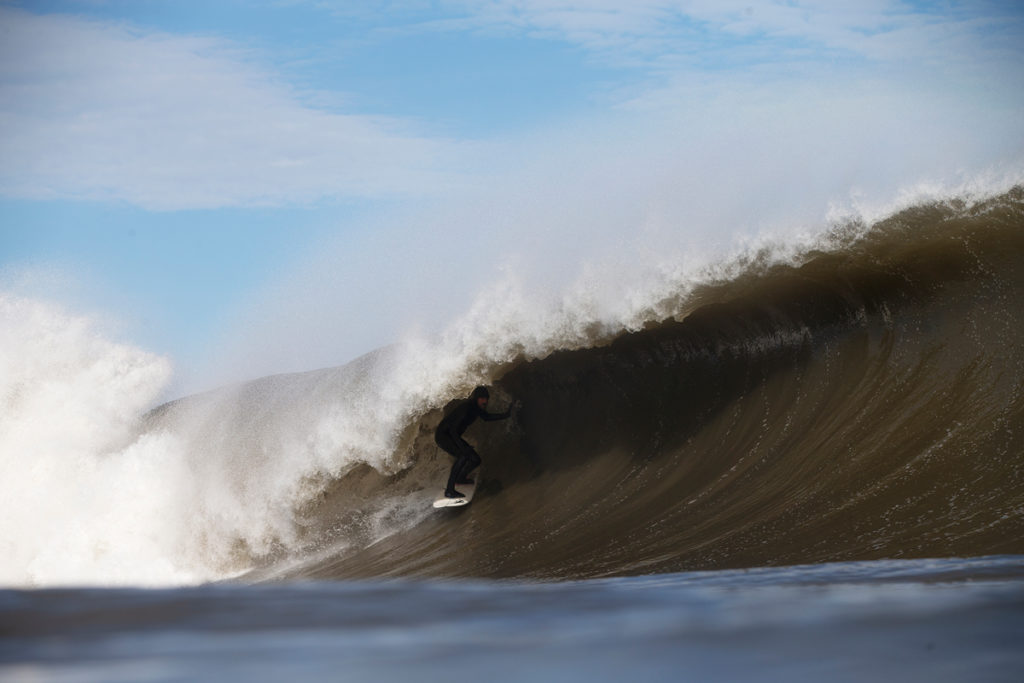 “You could see the perfect groomed lines marching in from miles away, it had to be as big and good as it gets and the nerves kicked in big time.

Gabe was suddenly very under-gunned and I was certainly thinking twice about swimming. The tide was still way higher than normally surfed here and getting out would be a mission with so much water sweeping across the reef.

I had a reccy from up on high and the sets were so mechanical and clean, it looked doable from above so I got my act together to get in with a longer lens. The swell dropped over the day but early on I reckon it was solid 8ft perfection, sunny, not cold and probably the best I can remember.

As everywhere was on, it was just the regulars and a couple of Cornish with plenty waves to go round. Everyone was stoked, the vibes were so good and that day pretty much sets the standard for the North Sea.”

Down in South West France optimum conditions usually draw borderline unbearable crowds, unless of course, you can scope out a perfect sandbar away from the mobbed lineups of Hossegor and Capbreton… 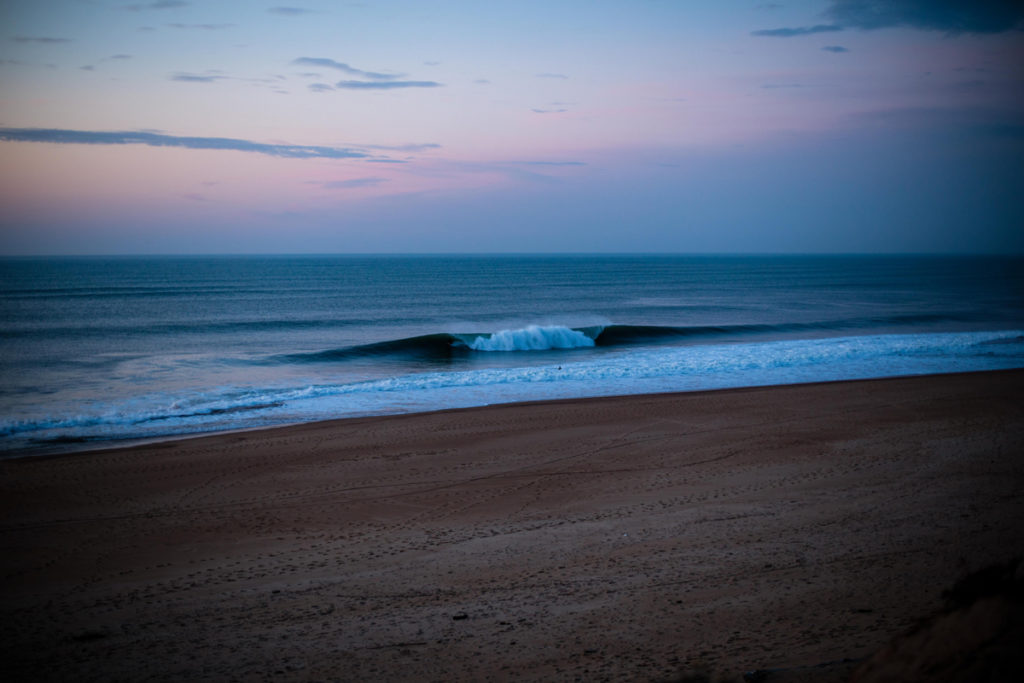 “I had stumbled upon a perfect bank a few days before the swell hit. On this morning most of the spots weren’t working very well, so out of curiosity without much knowledge of the spot I had found, I encouraged Patrick to come along and when we got there he couldn’t believe his eyes.”

A perfect spot, an incredible sandbar with peeling waves right and left. It was a peak so perfect, so close to home and so far from the crowds. Just unbelievable! For me as a photographer, it was a real pleasure.”

Down south in the Basque country, after a quiet Autumn, Mundaka finally roared to life in early November. 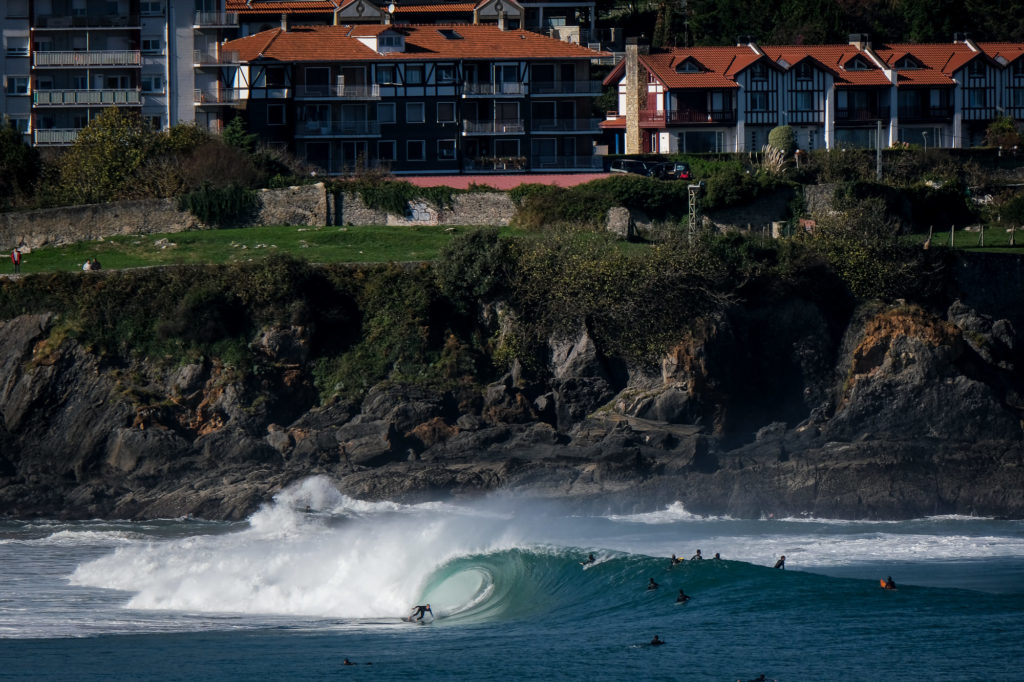 “The forecast looked pretty clear although that day was gonna be the first one with a strong swell over the sandbar and no one knew exactly what’s gonna happen,” explains Juan Fedez.

“Strong off-shore winds, good low tide, direction of the swell…everything showed a glory day in Mundaka. However, at sunrise the river mouth looked a little bit choppy and no wind. Bad sign. Natxo González, Adrián Fernández and Txaber Trojaola were the first ones to give it a crack, without much success, till the wind appeared and everything turned on. Wide and long barrels, big sets, and definitely, a glory day of surfing in Mundaka!”

On the other side of the continent the Med also played host to its fair share of glory days in 2018, but one in particular sticks out for Italian shooter Andrea Bianchi. 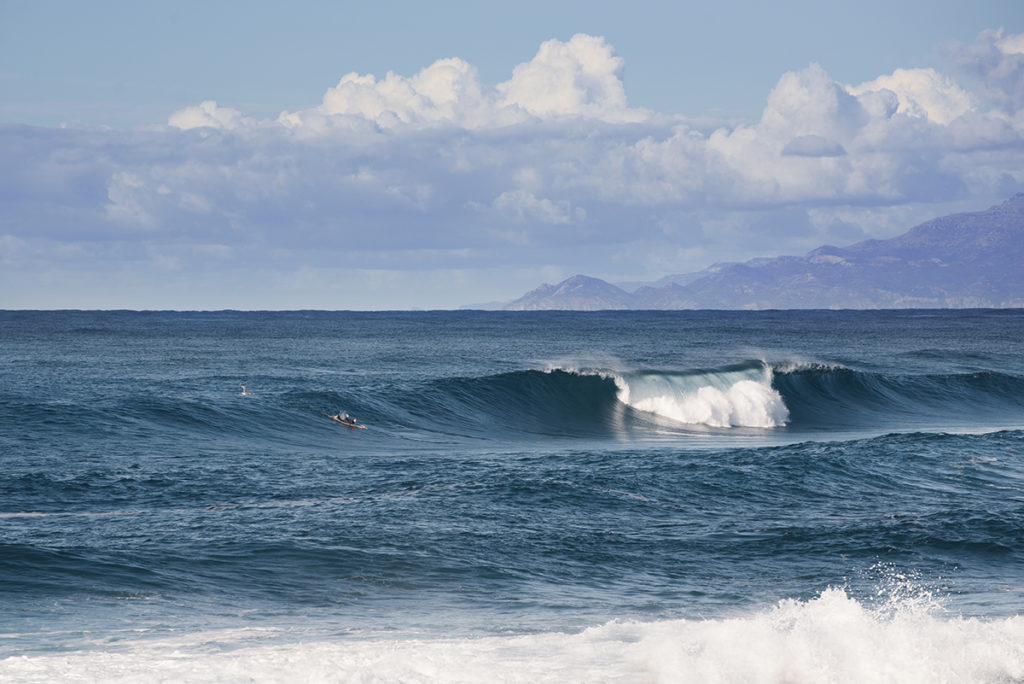 “We woke up on a winter Sunday, the cold ones with the sun, my favourites.” He begins. “ I called my little friend Mattia Maiorca (Italian longboard champion 2017) to come to a spot that works in rare conditions was looking excellent.  As soon as he saw it, he took out his Mark G single fin 8’6 and immediately jumped in.

For two hours Mattia launched himself on beautiful waves, always totally alone in the water.  In this image, a set has just arrived, and the first wave is beautiful. Mattia turns and paddles. Everything is in perfect harmony with the universe.. the sea, the sky, the nature and us…”

To round things out, here’s a tale of a trip to a mysto right which came up trumps for Diogo d’Orey, AKA In Water We Trust: 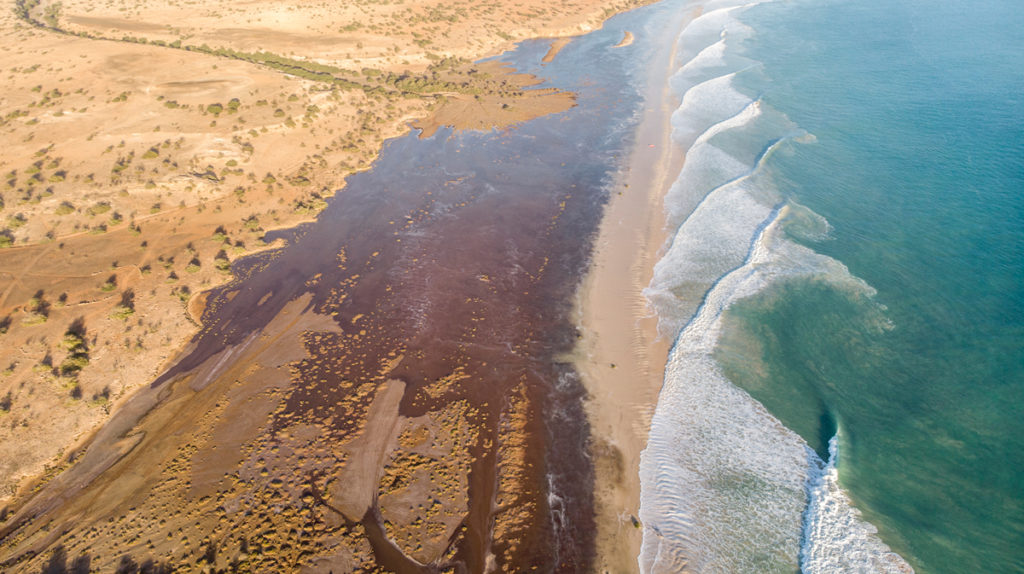 “At the beginning of the year me and Antonio Silva, my good friend and a fierce surfer, went on a mission I like to call the search for solitude. We didn’t know much about the place, only that there was a big swell coming. Took us countless hours, two layovers, a long drive and a broken tyre to arrive. But we already knew we were in for a treat once we saw the wave from the airplane window. And once we got there, it definitely felt like it was the best moment of our lives. A lot of things can go wrong on sandbars, but we were lucky to have a few incredible days out there. Trust me, nothing beats the sight of a barrel going on for 10 km.” 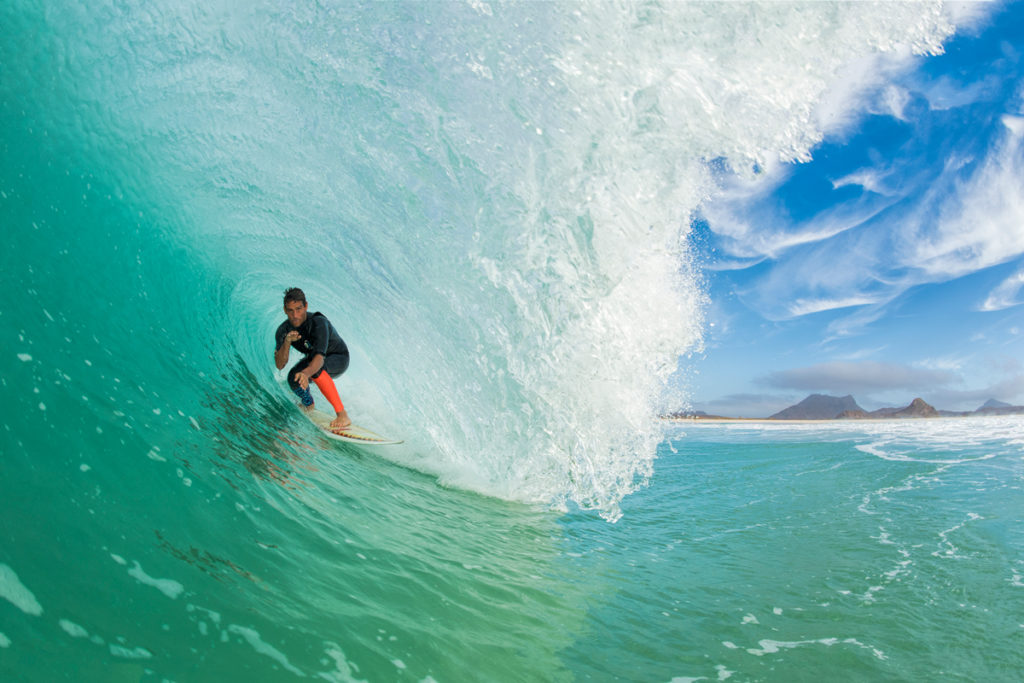 “Apart from the ecstatic feeling of documenting what is probably the best right-hander in the world, my best surf trip of the year also made me realize that nothing should stop you from living your dream. Make bold choices, do things that inspire you and others, ignore the haters and never stop exploring.” 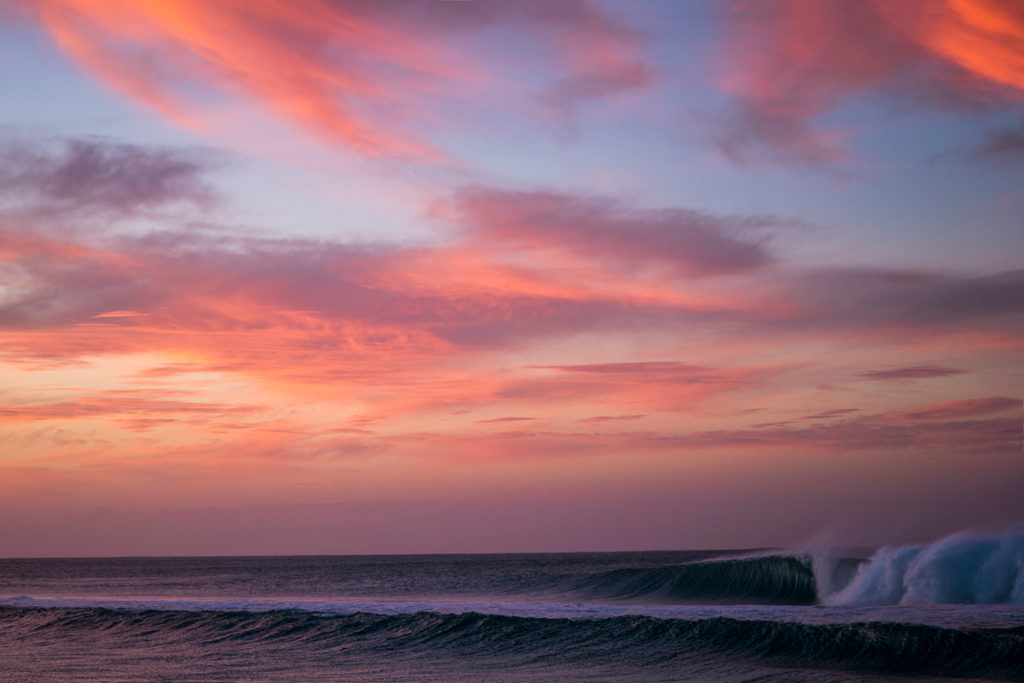 Want more surf tales from around Europe and beyond? Look inside our latest print edition and subscribe today.