Home » Is A Mix Of Ocean And Artificial Waves The Key To Fast-Tracking Progression?

Is A Mix Of Ocean And Artificial Waves The Key To Fast-Tracking Progression? Is supplementing time in the brine with fresh-water shreds the ultimate combo for speedy progression?

Ever since the world’s first commercial wave pool opened up in the wilds of north Wales, speculation has been rife that a new generation of wave pool based wunderkin will one day take over the surfing world.

While this battalion of uber-consistent freshwater shredders are yet to materialise, a much more prevalent, but much less discussed group have been quietly utilising artificial waves as a supplement to sea-based surfing to enhance their rate of progression.

Perhaps the most intriguing example are Basque brothers Kai and Hans Odriozola, the sons of Wavegarden creators Josema Odriozola and Karin Frisch. The pair devote equal time to cutting their teeth on the Basque country’s many excellent coastal waves, as they do pushing their progression in the artificial playground their parents created. So far, their approach is paying dividends, as they are already pegged as two of Europe’s finest up and coming surfers.

Outside of the upper echelons, there are swathes of intermediate surfers who have used the combination of ocean and artificial waves to fast-track their progression through the sport’s steep learning curve.

Once out of the whitewash, the pool offers the opportunity to really hone in on specific areas of development. From trying new manoeuvres to refining style and experimenting with new equipment, the endlessly consistent waves, which break every 90 seconds at Surf Snowdonia, help build competence and confidence quickly. 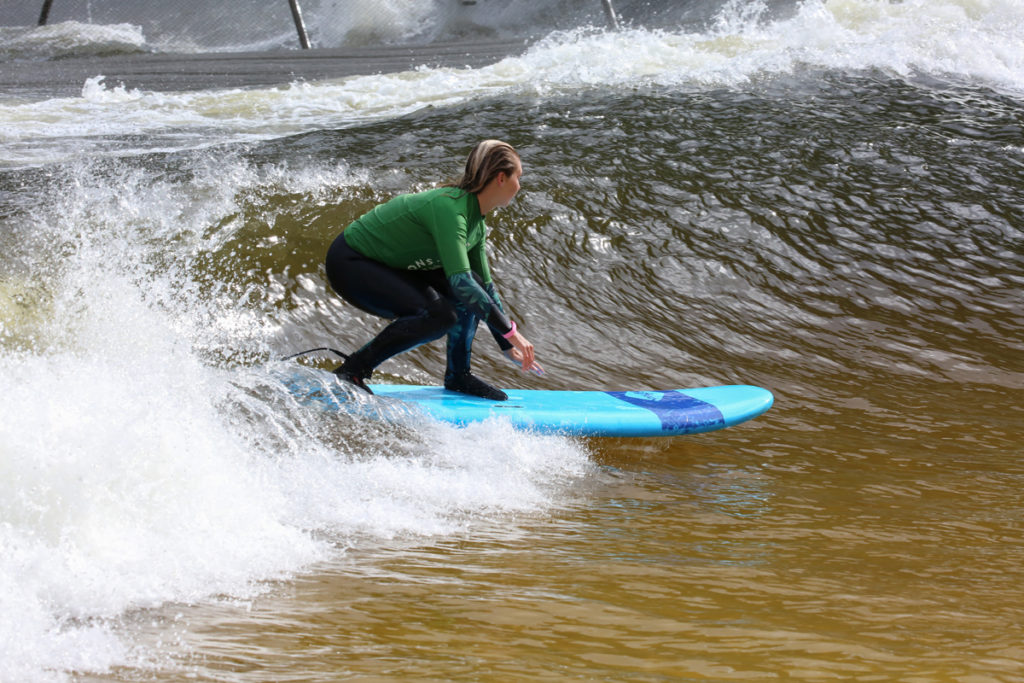 None better exemplifies this highly successful and uniquely modern approach to learning to surf than Surf Snowdonia instructor Delyth Darlington.

Four years ago, during a uni placement in Costa Rica, Delyth took her first surfing lesson. While she remembers very little progression during that initial foray, the rush of enjoyment stuck with her. Once back in Wales, she jumped at the opportunity to work on the reception at Surf Snowdonia and before long, she was putting in time in the pool.

In that first season, she went from standing up in the white water to trimming along unbroken face in a matter of months, and when the pool shut for the winter, she decided to head to Australia to surf some real ocean waves. While technically proficient, venturing into the unpredictable lineups of the Indican Ocean did serve up some challenges. “Out there I felt like my technical ability was several years in front of my actual surfing experience,” she explained. So Delyth made it the mission of her trip to learn the skills unique to sea-based surfing; how to paddle out, where to position and which waves to pick.

She returned to Wales the following year with a new found confidence and after qualifying as a surf instructor, she returned to work as an instructor Surf Snowdonia. She spent the preceding summer utilising the pools consistency to fine tune the minutiae of her surfing, while showing others how to do the same.

“One of the advantages here,” she explains, “is that it’s so easy to video and take photos, and you don’t often get that in the sea. It helps to make you aware of the little things which can make all the difference – like arm movement, the direction you’re looking in, body rotation – stuff you’re often unaware of in the moment.” After each wave at Snowdonia, you can look closely at that footage, then paddle back out and hit the exact same section, correcting any errors identified.

The pool also serves up a great opportunity to experiment with equipment, without having to wonder if your lack of enjoyment on a certain stick was actually just due to the lacklustre ocean conditions you decided to try it out in.

“When it comes to different board lengths and fin set ups, when I go to the sea I always pick a safe option because I just want to get out there and catch lots of waves and have some fun,” explains Delyth. “Where as at Snowdonia I’m much keener to play around.” 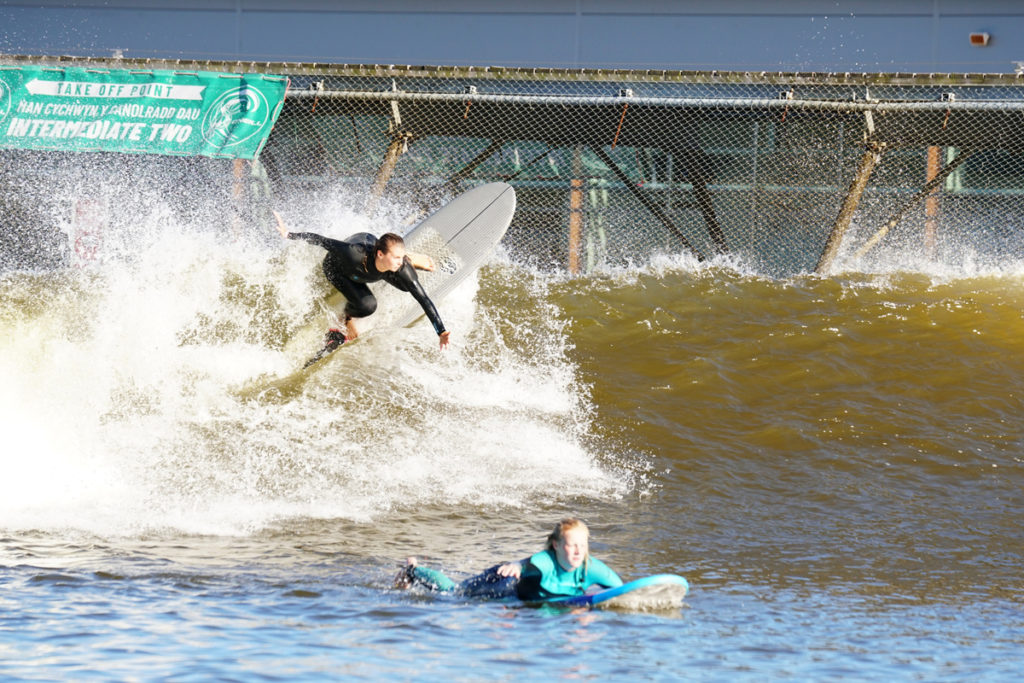 Delyth also cites her partner’s story as further proof of a combined ocean and pool approach as the golden ticket for progression fast-tracking. Despite growing up on the east coast of Australia, Sam had hardly surfed at all until he moved back to Wales with Delyth in 2018. Like her, he began by working on reception, and after just a few months plugging away on the beginner waves, he began making his way through Snowdonia’s four different levels of wave.

Last year, the pair travelled to Sri Lanka to work at a surf camp out there, for what would be one of Sam’s first ocean surfing experiences. “He picked it up so fast,” says Delyth, “by January he was riding overhead waves successfully.”

As wave pools continue to change the pro-surfing landscape, the most exciting opportunity for the work-a-day surfer, weekend warrior and keen-to-progress-intermediate remains the chance to supplement time in the sea with quick stints in the pool, which accelerate our progression and nudge us that little bit closer to the level we want to be.

Surf in the mountains-and-forests setting at Adventure Parc Snowdonia – home to Surf Snowdonia – from £35 per hour. Intensive development days, three-day surf camps and on site accommodation also available. Book Sunday evening – Thursday outside of school holidays to take advantage of off peak rates. Find out more at adventureparcsnowdonia.com.