The Story Of How An Obscure Finnish Architect Paved The Way For The Birth Of Aerial Surfing There may be no such thing as aerial surfing, were it not for a Finish architect called Alvar Aalto. Can you guess the link?

Behind each of surfing’s revolutions lies an interconnected web of events, innovations and protagonists.

Among these are deliberate moves, like the invention of the thruster, the adaptation of the jetski for towing and the refinement of the Waco air section, but there are also the obscure and accidental, that take place hundreds of miles from the ocean, but nonetheless serve as equally vital flaps of the butterfly’s wing in altering the course of surfing history.

Today, we’re going to tell the story of one of these, beginning with a design innovation dreamt up by a famous Finish architect in the 1930s, going via a Californian show home in the 50’s and culminating with the invention of aerial surfing in the 70’s.

The first half of the tale is lifted direct from the brilliant 99% Invisible podcast, which you should go and subscribe to now.

The story begins in southern Finland, in the late 1930s, with a designer and architect named Alvar Aalto. Now, while he may be obscure to you or I, he was anything but to a Finlander of the era. In fact, his furniture was so well-loved, pieces could be found in almost every building and home across the country. While he dabbled in disciplines ranging from textiles to glassware, an appreciation for smooth flowing curves permeated all that he crafted. 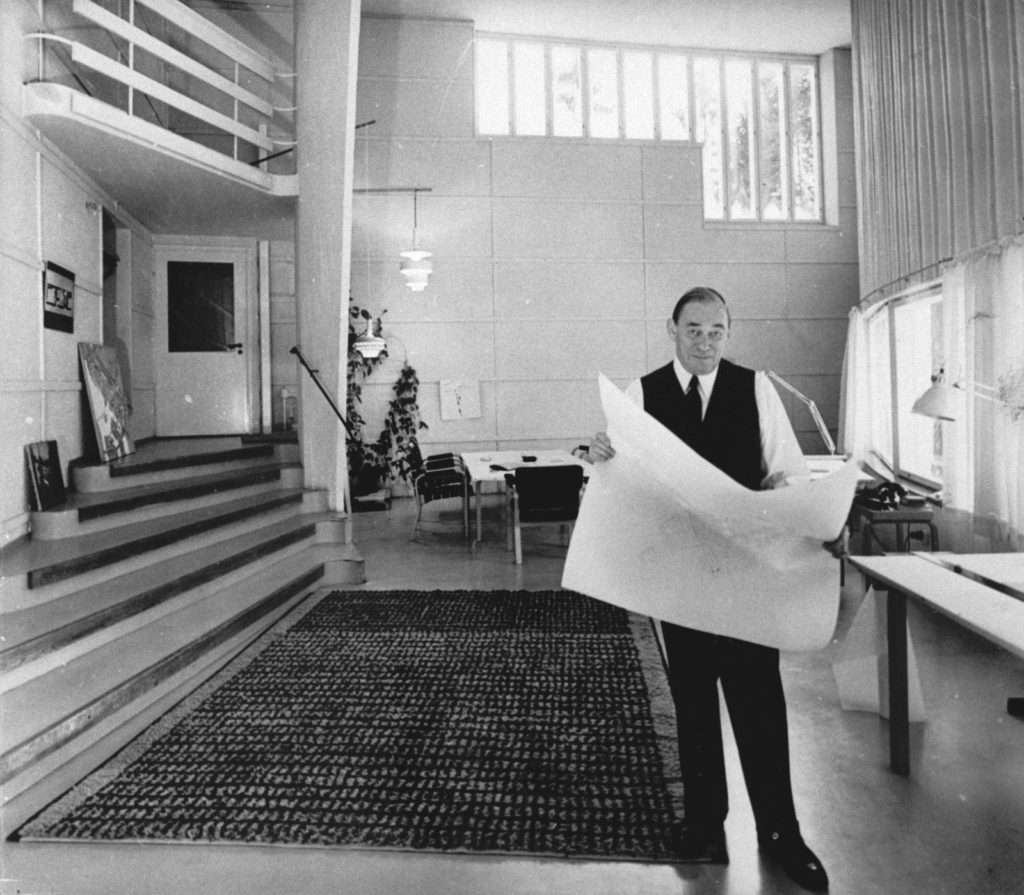 Alvaro Aaltes at his home. Via Encyclopedia Britannica

From bent wood tables to wavey glass vases; undulations defined the Aalto aesthetic, and when he was approached by a famous art collector and asked to design her home, he decided it was the perfect opportunity to apply the same approach to architectural design.

He conceived a house with rounded walls and curvaceous stairways, and, most importantly for our purposes, what architectural historians believe could be the world’s first kidney-shaped pool, complete with smooth-rolling transitions between walls and floor.

One day, as Aalto beavered away on the designs in his home studio, an American architect named Thomas Church and his wife turned up unannounced to meet with him. The trio instantly hit it off and went on to become great friends.

Several years later, back home in the states, Church was commissioned to design a home on top of a remote hill in Northern California for a family called the Donnells, and he decided to craft his very own version of the kidney pool, the designs for which many believe he had spotted in Aalto’s studio back in Finland.

After its completion in 1948, the Donnell house and garden went on to become one of the most famous suburban homesteads of the 20th century. 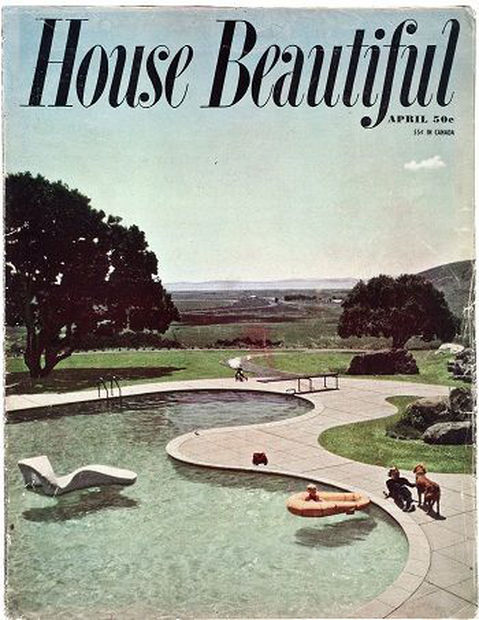 The Donnell pool on the cover of House Beautiful magazine.

The garden – with the pool as its centrepiece- featured on the cover of dozens of Californian home and lifestyle magazines throughout the ’50s (as well as appearing as the main image in the Encyclopaedia Britannia under ‘landscape architecture’) and helped shape the modern idea of what a suburban garden could be. Naturally, fellow architects from around the state set out to emulate the look and by the ’60s, thousands of kidney-shaped pools, with rounded edges, were popping up across California.

At around the same time, the sport of ‘sidewalk surfing’ was beginning to gain popularity along the coastline around LA. It was conceived by restless teens as a way of practising surfing manoeuvres on the concrete, once the afternoon onshores came up, using little wooden boards, initially with crudely sawn off roller skate trucks screwed to the bottom. 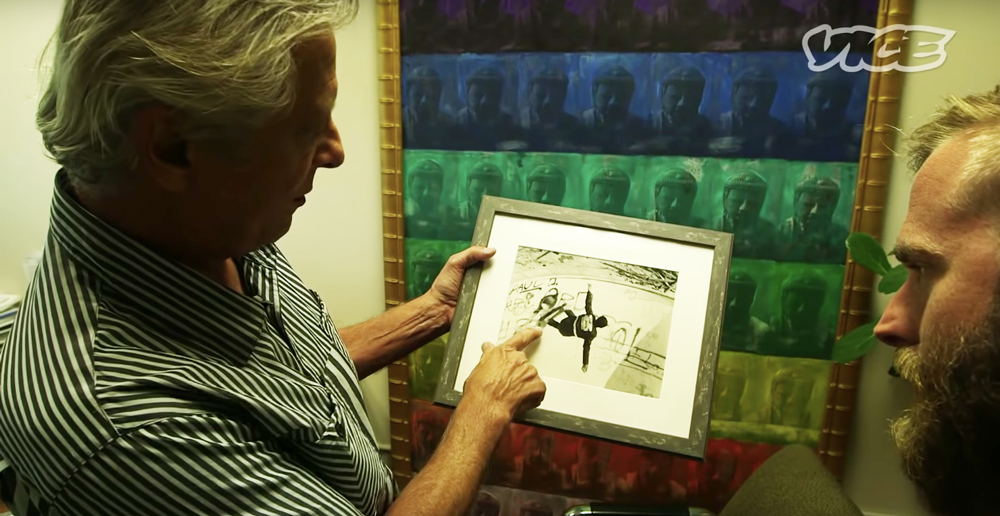 Herbie the earliest ever image of pool skating. Photo Vice

According to legend, one day, after their parents went out of town, a group of teenagers drained their backyard pool and attempted to place some of their carves onto its smooth contoured walls. The earliest documented example of pool skating is an image of Herbie Fletcher, taken in 1963, however, it wasn’t until the mid 70’s that two major events paved the way for pool skating to really take off.

The first was the invention of the urethane wheel, which allowed skateboarders to take on a much wider variety of surfaces and the second was a drought that ravaged southern California, preventing residents from filling up their curvaceous, Donnell inspired kidney pools. Skaters would find an empty home, hop the fence, drain any water that remained in the pool and skate until the police turned up.

As time went on the skaters attempted to place their carves higher and higher up the walls of the pool, with the goal of making it all the way to the lip. At some point, they started ‘hitting the tiles’ with enough speed that they would launch out of the top of the pool altogether and rotate in the air, before dropping back in.

By the mid 70’s bowls and half pipes were being built out of wood and concrete, mirroring the contours of the backyard pools, to facilitate the ever-growing slew of aerial manoeuvres. 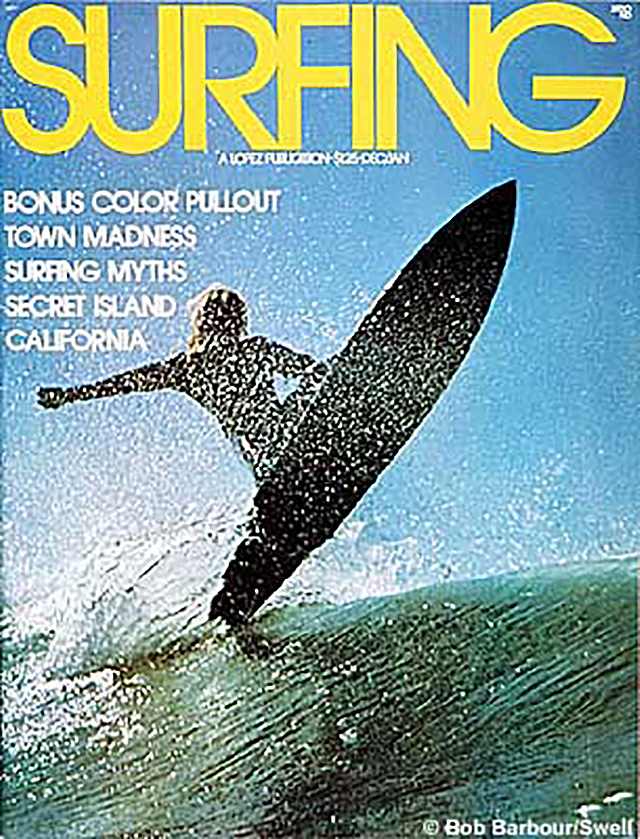 Kevin Reed on the cover of the Surfing magazine in ’75

Up in Santa Cruz, at around the same time, a surfer/ skateboarder called Kevin Reed became the first man to attempt to take skateboarding manoeuvres back into the ocean. In 1975 he appeared on the cover of Surfing Magazine, busting out of the lip of the wave, sending imaginations around the country racing. The first seeds of what would become the aerial surfing revolution had been sewn.

Then, in 1979, teens Matt Kechele and Jeff Klugel from Sebastian Inlet in Florida attempted to mirror local skateboarder Allen Gelfand’s aerial antics, setting out to recreate his ollie airs at their home break. Kechele renamed the aquatic version the ‘Kech air,’ and while his sponsors loved them, they were met with contempt by the old school locals, who scrawled “Silly Kech, Tricks Are For Kids” on the Sebastian bathhouse. However, Kechele did manage to inspire a young kid from just up the coast with his new moves, taking him under his wing. That kid’s name was Kelly Slater.

In the 80’s Martin Potter took aerial surfing up a few notches, inspiring Californian surfer/ skaters Christian Fletcher (son of Herbie, who featured in the first documented pool surf session) and Matt Archibold to take up the mantle. As the decade wore on, the pair would redefine what was possible above the lip, going bigger and bolder than any before them and introducing some of skateboarding’s more technical aspects, such as grabs and spins, into surfing for the first time. 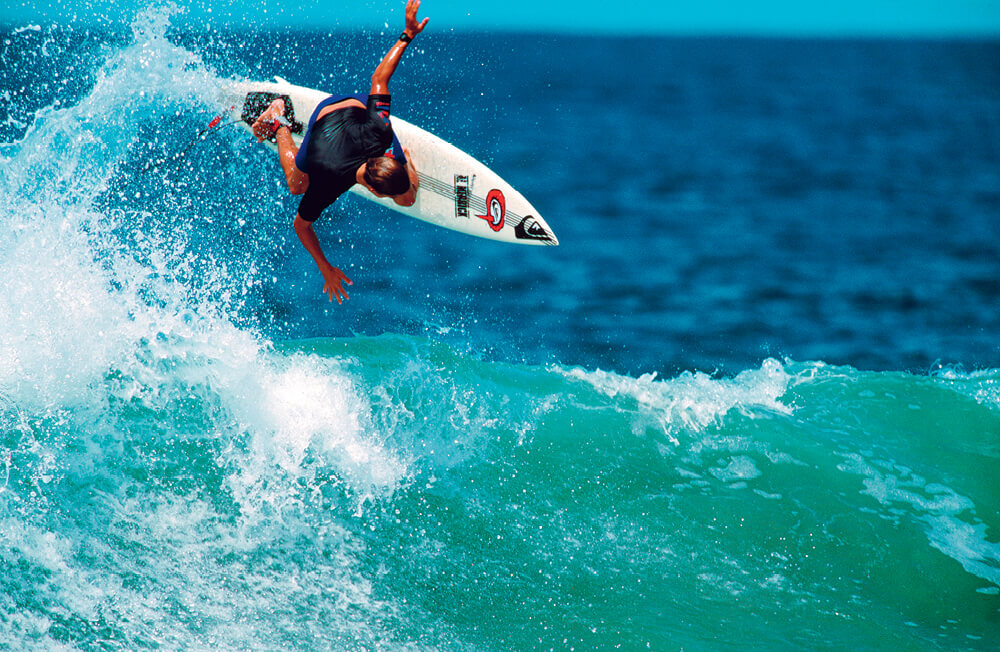 Slater and his patented backhand straight air, shot in the early 90’s by Art Brewer.

However, according to surf historian Matt Warshaw, it was not until that young Floridian protege of Kechele’s took to the air in a contest vest in 1990 that aerial surfing gained true validation.

It all began with a convincing win in the 1990 Body Glove Surf Bout, held in beautiful overhead waves at Trestles, reports Warshaw in EOS. “Slater loosed off an aerial every third or fourth wave. He blew a few, and struggled through a few more. But just as often he feathered the move into place so that it was organic to the ride and not a tacked-on addition.”

“From the early 1990s onward, thanks to Slater, the aerial became a near-mandatory skill for the pro surfer,” continues Warshaw, “and most world-tour heavies learned to land the entire alphabet soup’s worth of air moves.”

In the 30 years since, aerial surfing has lodged itself firmly at the leading edge of surfing’s progression, with dizzying new heights, flips, spins and variations achieved, both in and out of competition, with each year that passes.

While today’s tweaked out flips, and double-spins are a whole world away from the manoeuvres being thrown by Reed and his cohorts in the 70’s- and even further from those being laid down above the lip of pools in the decades before- it’s unlikely any of it would have been possible, were it not for that strange Finish architect with a love for curves.

More like this:
Five Groundbreaking Manoeuvres That Changed Aerial Surfing
The Extraordinary History Of Surfing On Rapa Nui; The Most Remote Inhabited Island On Earth
The History Of The Pigdog- Who Invented It & Where Does The Name Come From?