Home » Why Are So Many Pro Surfers Going Back To The Land?

Why Are So Many Pro Surfers Going Back To The Land?

From Kauai to North Cornwall, pro surfers are turning their hands to organic farming. Here, we introduce a selection of them and examine their motives.

In the late 60’s and 70’s surfers fleeing Vietnam conscription and the talons of rampant consumerism arrived in Byron Bay, rented farms on the cheap and began growing their own food.

Back then the Rainbow Region was more well known for its dairy, logging and whaling industries than the environmentally conscious, spiritually awoken virtues it embodies today. However, in the 70’s a mini-revolution began on those cheap farms, and it was surfers who were sewing the seeds.

Nat Young (pictured here in 1971), Alby Falzon and the Morning Of The Earth crew, were some of the first surfers to take advantage of cheap farms to rent in early 70’s Byron Bay. Frame: Alby Falzon

Since then, there’s been a steady trickle of surfers, from all four corners of the globe dipping a toe into the world of independent farming, but in the last decade or so, their numbers have boomed.

Most famously, there’s Moy Hill Farm, situated on a windswept clifftop on the west coast of Ireland. Started back in 2012 by Fergal Smith, Matt Smith and Mitch Corbett, the trio, dubbed ‘the surfing farmers’, have since become the darlings of both the surf and mainstream media. 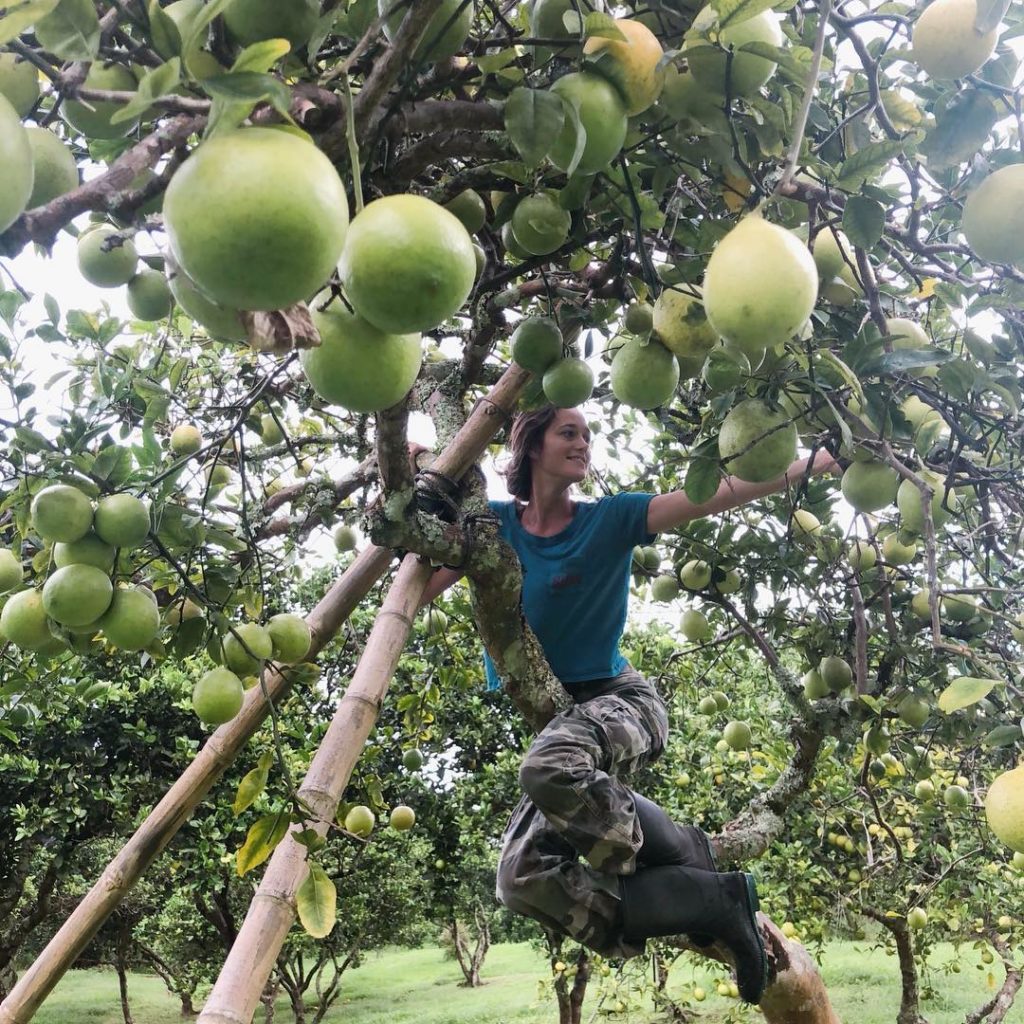 Outside the spotlight however, scores of other surfers, ranging from the workaday to the high profile pro, have been turning their fingers green. Back in Byron, Dave Rastovich has a garden overflowing with a tangle of edible flora. Across the South Pacific in Hawaii there’s off-grid big wave charger Kohl Christenson, tour surfer turned activist Dustin Barca and power couple Monyca and Ola Eleogram. And in Europe, ex-British champ Jobe Harriss and Spanish QS high-flyer Gony Zubizaretta both have small holdings which sport a prize crop of fruit and veg.

Even John John’s got a few greens (and a bee-hive) in his Pipe-adjacent paddock and Kelly Slater recently claimed in an interview he’s planning to set up an organic growing station once he finishes travelling. Not with soil though, obviously, but some complex fish waste-fuelled aquaponic system. 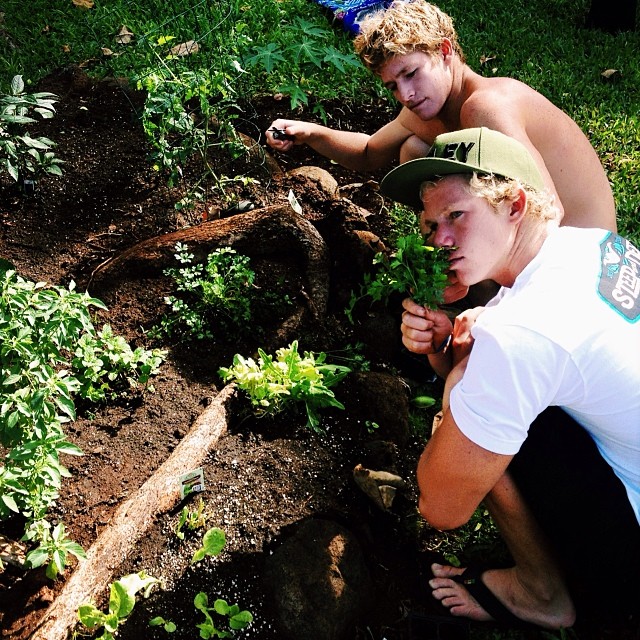 But what’s driving this burgeoning trend? When compared to 70’s Byron Bay, contemporary surf culture appears decidedly apolitical, however, surfers are arguably just as engaged with environmental issues as ever and a mistrust of consumerism still lurks beneath the surface.

When it comes to the food industry, you don’t need to be a new age thinker, or great anti-capitalist to see there’s something seriously wrong. Consider for example that roughly one-third of the food produced in the world gets lost or wasted. That equates to almost 1.3 billion tonnes per year. Or the massive impact industrial runoff is having on the health of our oceans. Or the role the meat and dairy industries are playing in accelerating climate change.

In the face of these issues, the choice to start growing your own food serves as a way to opt out of a problematic system and take a little bit of power back from the unscrupulous corporations driving it. 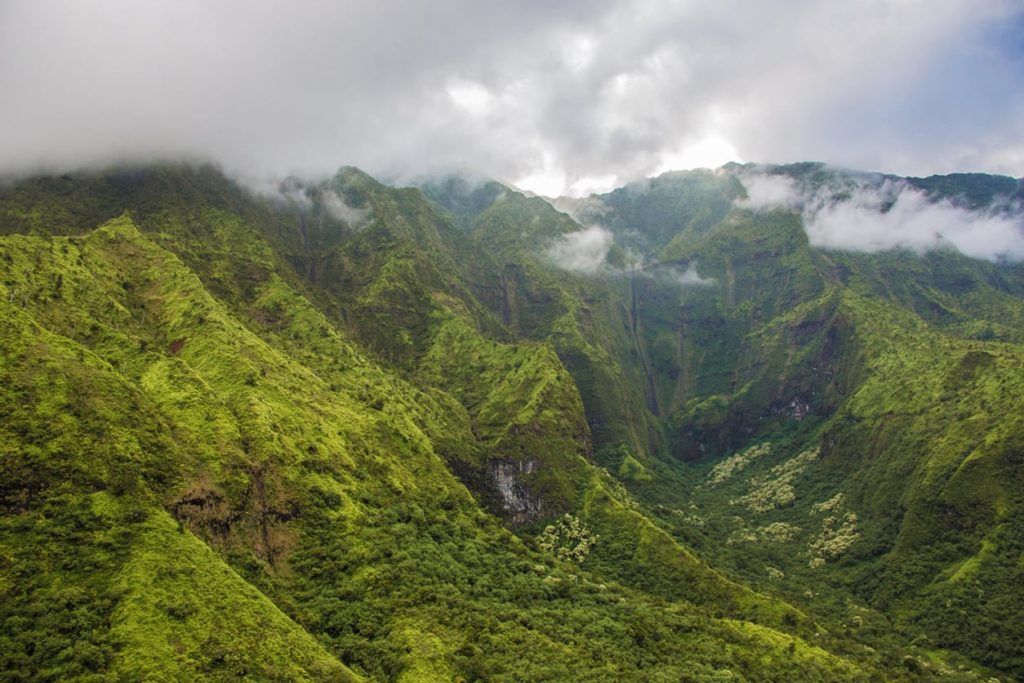 In 2016 Cyrus Sutton released a film, several years in the making, entitled Island and Earth, which explored the issues brought about by the agro-chemical corps presence in Hawaii, and how the locals are fighting back. Photo @cyrus_sutton

In Hawaii, the dubious inner-workings of the food industry sit in particularly sharp focus. On the island of Kauai , great swathes of land are owned by industrial-agricultural corps, who use the lush green pastures as a giant petri-dish to develop pesticide resistant, genetically modified seeds. Unsurprisingly this process entails spraying a huge amount of chemicals onto the crops, the toxic runoff of which has leeched into the water supply, causing health issues for both local humans and animals. On top of this, 80-90% of food in Hawaii is currently imported, despite the country’s history of self-sufficiency.

Recently, Hawaiians have been fighting back, campaigning hard against the agro-chemical corps and setting up their own fruit and veg patches. Tour surfer turned MMA fighter Dustin Barca has been leading the charge in this new wave of local growers, through his project ‘Ohana O Kaua’i.

“We are planting a garden every two weeks.” He told Freesurf magazine. “Starting with local Hawaiian families that want to eat better, healthier food. We want to make growing your own food cool again and show how easy it really is.”

“Hawaii could be a blueprint for the world for self-sustainability.” He continued. “It was before and can be again.” 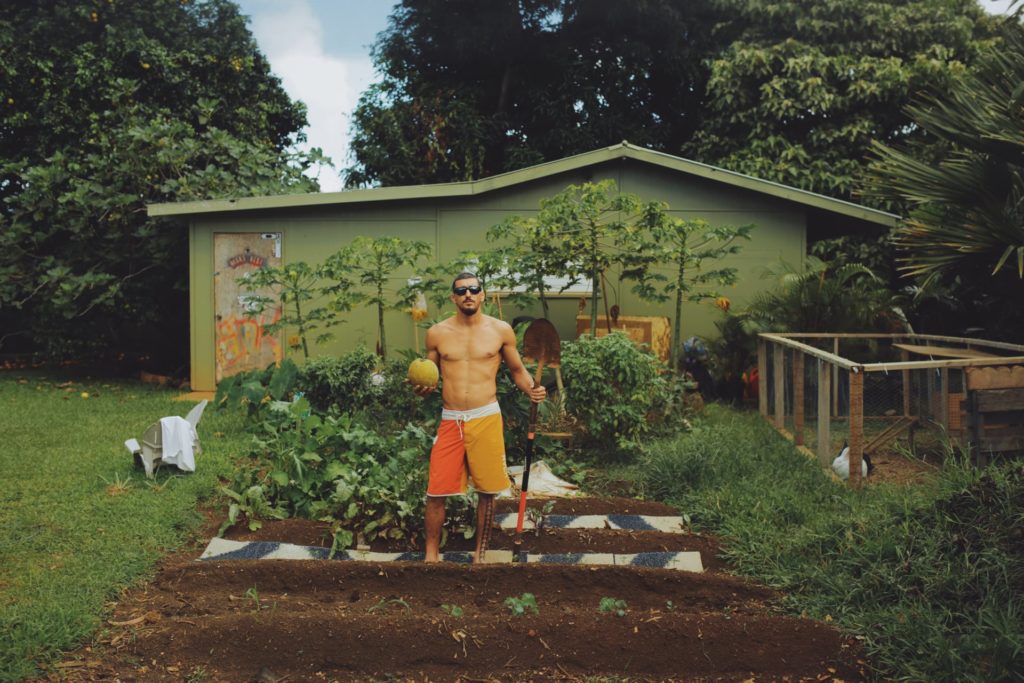 Dustin Barca and his garden, from Island & Earth. Photo @cyrus_sutton

Similarly, over in Ireland, the creation of Moy Hill Farm was about much more than just food supply. After growing up on an organic farm as a kid, Fergal’s journey back to the land began when he became disillusioned with the number of long-haul flights required to keep up his career as a pro surfer.

In 2012, he clubbed together with Mitch Corbett and Matt Smith to buy their first half-acre garden. Then, in 2015 they bought a much larger plot, transforming it into what is now Moy Hill Farm; a 17-acre organic community farm. Folk are invited to come and stay, lend a hand, learn to farm and in return are fed with the garden’s produce. The goals are far-reaching but at its core, Moy Hill is dedicated to replenishing both the soil and the lives of the people who gather to turn it. With plenty of time still to surf, Fergal reckons he’s never been happier. 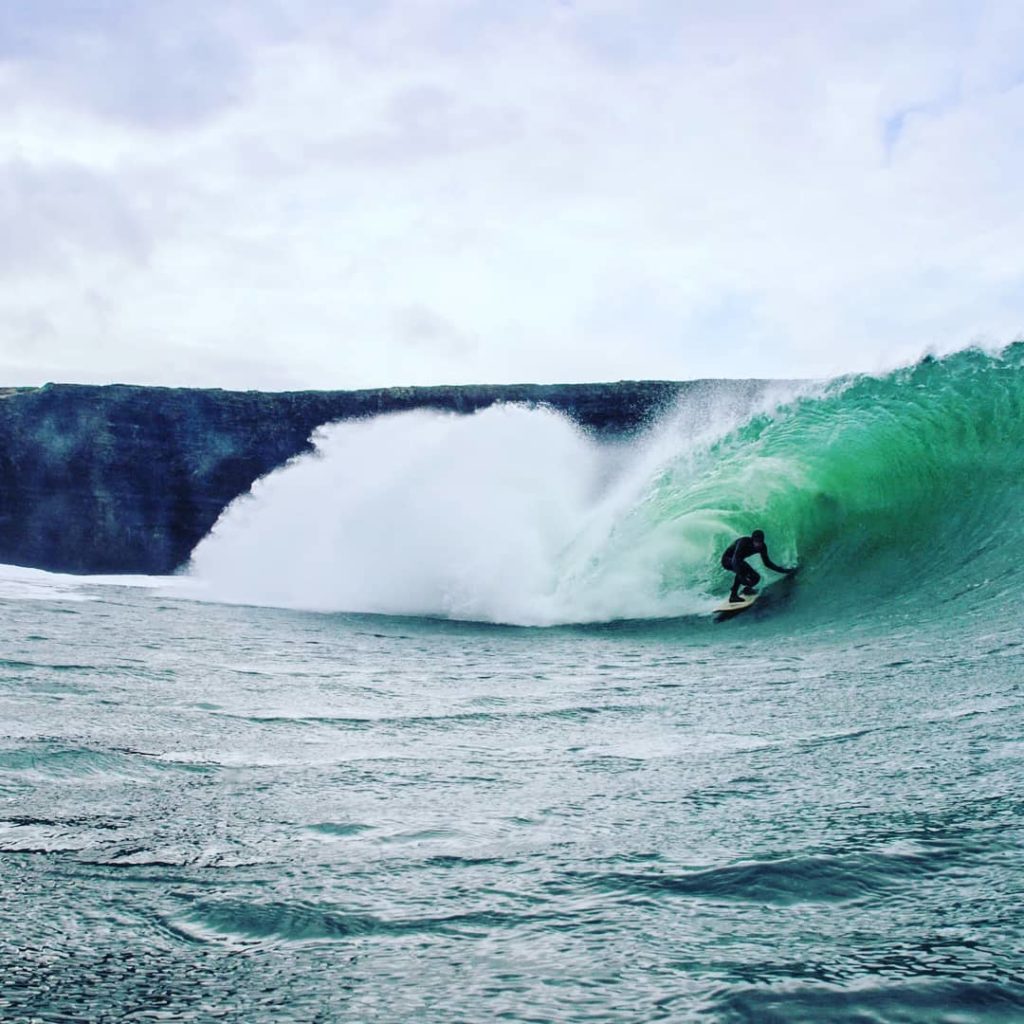 Fergal pulls into a barrel at Rileys on a board made from a block of balsa wood, with a hollowed out honey-comb core, crafted by local shaper Tonn Surfboards. Frame @kevlsmith

Indeed, a whole collection of recent scientific studies support the idea that more time spent in nature can significantly reduce anxiety and increase a sense of overall well-being. Another surfer who’s recently discovered these benefits after over a decade in the upper echelons of competitive surfing is Spanish born, Portugal based Gony Zubizaretta.

Two years ago, Gony clubbed together with two friends, Marlon Lipke and Alex Grilo, to buy up an overgrown plot of land in the rolling hills of Ericeira. “I remember in between comps working there with Marlon and Grilo just moving trees and cutting down bushes,” he told us. “But because it was so huge, you had to work for weeks to see a difference. Once it was done we started planting all kinds of veggies.”

Now, the plot boasts a fruitful harvest of lettuce, tomatoes, lemons, oranges, mangos and avocados, as well as a menagerie of chickens, goats, ducks and a donkey. The farm employs several workers full time who tend to it while Gony is away travelling and all the produce is sold directly to a neighbouring surf camp, as well as Marlon’s new cafe in Lisbon called Comoba.

“Even if you’ve had a bad day, you go there and you feel so good,” Gony continues. “The animals are so friendly, you just forget all your problems, it’s so peaceful. Right now, that farm is something that helps me to be happy.” 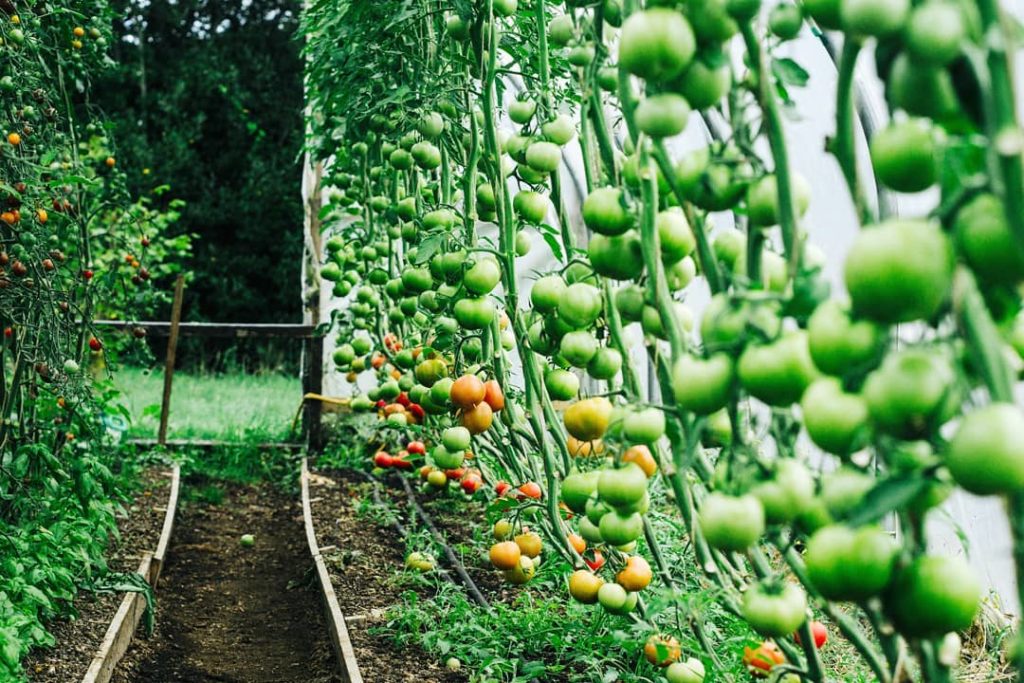 Jobe’s farm is situated on a Bude clifftop, just a few minutes walk from the town’s surfing beaches. Photo @amethiveg

For British ripper Jobe Harriss, necessity played more of a role than romanticism or idealism in starting up his venture, called Amethi Veg. Back in 2015 Jobe lost his main sponsor, leaving him looking for an alternative career. “I decided I’d have to set up my own business to give me some financial security,” he explains, “as well as some flexibility to try and continue getting as much time in the water as possible.”

“I knew I wanted to do something fulfilling which would tackle all the environmental issues I was concerned about and organic farming on a small scale seemed to roll all those issues into one,” he continued. “I can tackle plastic waste by selling plastic-free, I can provide local people with delicious, fresh and healthy food at an affordable price, I can encourage biodiversity in an agricultural environment and sequester carbon by managing soil health. All that coupled with the fact no one was growing veggies on a proper commercial scale in Bude meant it was actually a really viable business to start putting my mind to.”

After a year of constant learning, challenges and setbacks and the business is flourishing. Jobe spent the summer creating weekly veg boxes which he sold directly to families as well as selling his produce direct to a selection of local restaurants. 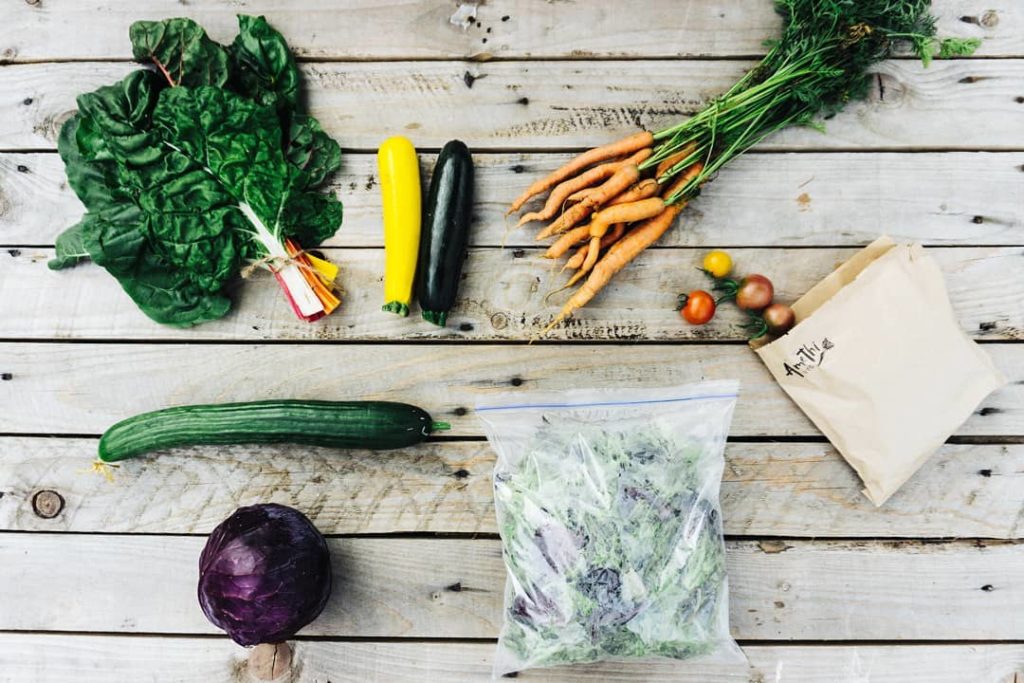 The contents of an Amethi veg box. Photo @amethiveg

While the reasons for planting that first seed vary among the surfers featured, there’s no doubt that the farming and surfing lifestyles have may similar, or at least complimentary qualities. Most obviously, both require you to spend much of your time in the great outdoors. Both facilitate an interaction with the natural world with no mediation or impediments. For Rasta, even the clothes on his back have proven too much of a barrier between him and nature at times. “Gardening naked is unbelievable when it’s warm,” he explained in a recent video. Adding, “actually it’s kind of better if it’s cold, because there’s less to get snagged on things.”

The two pastimes also require a heightened awareness of nature’s idiosyncrasies. Whether its how to deter a certain type of beetle dead set on eating your produce, or understanding the nuanced interaction of wind, swell and tide. These are areas that demand excessive study, that most ordinary folk would never consider. Then there’s the hard graft both require and the abundant rewards the labour hours serve up. And of course, as Jobe explained, “the seasonality of it all actually makes it a really good option if you want to hunt down winter swells too.” 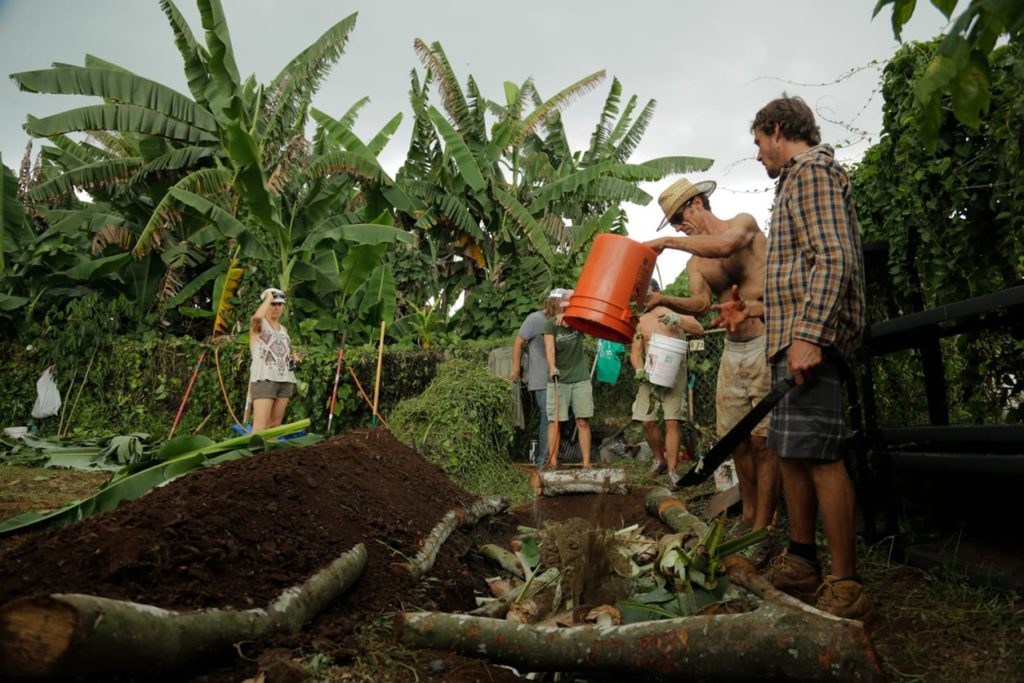 With such appeal, we’re quite sure the uptake will continue to rise exponentially in the coming years. And while a few green fingered surfers are just a drop in the ocean of the world’s food production, you know what they say about mighty oaks and little acorns.