It's been a truely memorable season so far for the hardy crew of surfers who occupy England's north east corner. Here's a gallery of highlights:

England’s fickle North East coast has been enjoying a sustained period of pumping waves over the last few months, with their vast array of top quality set ups springing to life for the crew of elated local surfers.

Last weekend saw the King Of The Point, a grass roots surf competition organised by Secret Spot Surf Shop with a six month waiting period, finally get the call up. The event brought together the regions foremost chargers to battle it out in solid waves at an infamous left hand point. Local legend Jesse Davis,  Louis Hudson, (son of the late great Tynemouth Surf Shop founder Steve Hudson),  Jamo Taylor and Danny Allott were all afforded honourable mentions, however in the end it was Gabe Davies who snatched a super narrow victory, which he duly conceded to local boy Tom Wilson, deciding it probably wasn’t the best idea for the manager of the events lead sponsor, Patagonia, to win the comp. Over to Jesse Davis for a little bit more insight on what’s been going down:

“It has been good on the East Coast recently.” Del from Scarborough commented to me after the KOTP wrapped up, and no one can argue with that. This winter has been a standout so far with several swells and wind patterns delivering a memorable abundance and variety of waves for East coast surfers. Del lives and works with views of North Bay Scarborough and whenever our paths cross he is in amongst it in the best waves. He is also on some of the best surf trips departing from the East coast going back as far as I can remember, with the possible exception of ex-travelling pros Gabe Davies and Sam Lamiroy, because it is hard to beat some of their missions.

Davey and John Stores from Tynemouth also match Del  when it comes to style points abroad. Many others do very well including Danny Allott, Sandy Kerr and Louis Hudson and it was a refreshing change to see Louis and Danny away from Longsands beach and surf lessons with Tynemouth Surf Co. A few good swells have graced our coast this winter so far, the most recent introduced the inaugural, ‘King of the Point’. Legend has it that the idea came from a Scarborough pub session, with Tommo and Scotty from Secret Spot Surf Shop not just dreaming-up the event but putting it together. They sought guidance from Gabe Davies of Patagonia who has seen more contest vests than he would probably like to admit.

Joel Grey, a true Geordie surfer helped add Rip Curl as a sponsor along side Patagonia for the King of the Point. Judges and spectators all seemed very enthused with the hour long six man heats. The waves were worth watching. Wearing orange in separate heats were me and my brother Gabe. With me serving as more of a stunt double for a polished stand out performance from Gabe on his four-fin. Have the waves really been any better than previous years? That is what good scientific academic research could identify for us. I could discuss this with Dr Tony Butt big wave Patagonia charger and Oceanographer. For me the autumn has mainly been two or three decent swells. The last low being a 965 mb in the North Sea. This is not an an exceptional low pressure, but it is deep enough. There was a low of around 910 mb low in the 1990’s.

Did any of these recent swells out rank all those that had gone before? Not really but the swells were very good ones. They will go down as the best of this year and amongst the best of the last eight to ten years. To put things in perspective the last time an East Coast ‘Big wave’ Competition took place was back in the early 90’s. ‘Big wave’ being a relative term since both then and now,  you could ride the waves on short boards.

A date on the gold plastic trophy awarded for first would give the exact year, with the second prize being a cassette playing Walkman! Someone from Saltburn won I believe and I would hazard a guess and say Gary Rogers was also in the final along with Gabe. Gary Rogers son Evan caught a couple good ones in the KOTP. Jesse Davies best wipeout at KOTP thanks to a deep take off on a warpy beast. Photo Lewis Arnols // @lasurfpics

The KOTP captured the East coast cold-water challenge surfing spirit, the swell has gone but the fleeting memories, images and a chance to dream like Tommo and Scotty remain. For Del, ‘Posh Tom’ (KOTP wetsuit prize winner) and the rest of the East Coast folk we can wish for more waves and warmer water. Good times are on the way as the festive season greets us this December.”

Away from the limelight, the regions numerous other spots have also been firing. “We’ve had an insane run of swell and some seriously low temperatures all the way down the east coast over the past few months.” describes local surfer James Owen who moved to the region two years ago. “The unbelievable quality of waves, surfing in the freezing north sea water and snow have made this season quite a special one for me,  I guess braving the freezing winter temperatures makes it a very unique and rewarding experience, especially once you’re out of the water having a nice warm cup of tea!”

Here’s a selection of images featuring some of the highlights from the past few months. 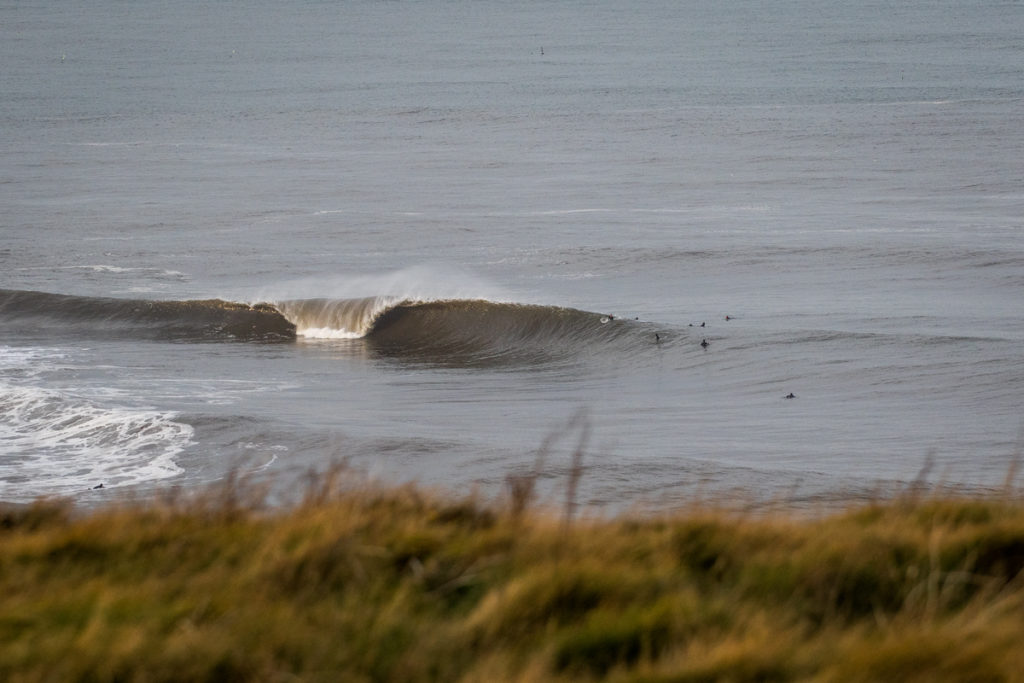 Check out the latest issue of the magazine for a full report by local photographer Lewis Arnold on how the NE surf community is recovering after a series of tragic losses, with an introduction to some of the bright eyed crew leading the surf scene forward towards a positive future. Buy it here. Or, subscribe to never miss an issue.